A letter from the Cigar Association of America (CAA), Cigar Rights of America (CRA) and International Premium Cigar and Pipe Retailers Association (IPCPR) asks Congress to consider the inclusion of two different pieces of language into the upcoming omnibus funding bill that would ease the burden of regulation of the industry by the U.S. Food & Drug Administration (FDA).

As explained in more detail here, the omnibus is a single bill that contains vital government spending bills. Historically, those bills would be passed individually, but in recent years divisions in Congress have meant that government funding has largely been dictated by the single omnibus bill.

Last year, language was included in a bill that passed the House of Representatives that would have done two separate things:

1. FDA would no longer regulate “premium cigars.” This covers most cigars you see in a humidor, you can see the definition here.

2. FDA would change the predicate date, also known as the grandfather date, from Feb. 15, 2007 to Aug. 8, 2016, the latter of which is the date the legislation went into effect. This would affect all deemed products: cigars, pipe tobacco, e-cigarettes, hookah and others.

Now, the three groups are hoping the language makes it into the final version of the bill.

A joint letter from the groups—the same three organizations that are suing FDA in a Washington D.C. court—reads as follows:

To Whom It May Concern:
On behalf of the International Premium Cigar and Pipe Retailers (IPCPR), Cigar Rights of America (CRA), and the Cigar Association of America (CAA), we wish to express our collective support for consideration and inclusion of both cigar provisions: section 752 (premium cigar exemption) and section 753 (predicate language) in the Omnibus package (H.R.3354).
IPCPR, CRA, and CAA endorse both provisions and we urge they should be considered equally but separately and on their own merits as final decisions are made on the FY 2018 spending package.
As negotiations come down to the wire on a spending package, we greatly appreciate your support in protecting the future of cigars from FDA over regulation.
We cannot stress enough to you the importance of this language and how it would protect the cigar industry and the tens of thousands of American jobs that comprise our industry.
Thank you for your consideration of these important provisions.
J. Glynn Loope Executive Director, CRA
Ken P. Neumann President, IPCPR
Craig P. Williamson President, CAA

The omnibus is expected to be unveiled as early as tonight and pass by Friday night, which is when the government runs out of funding. 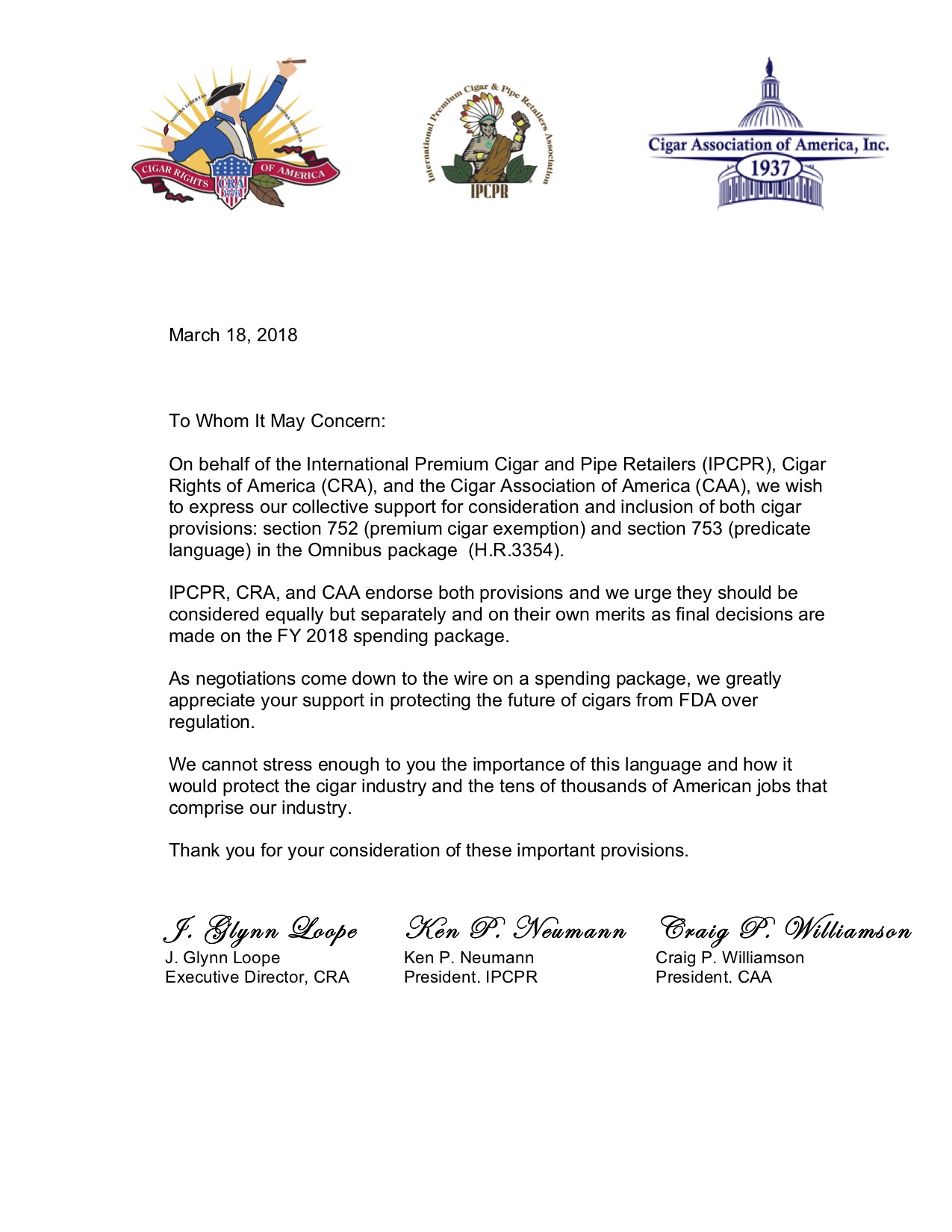