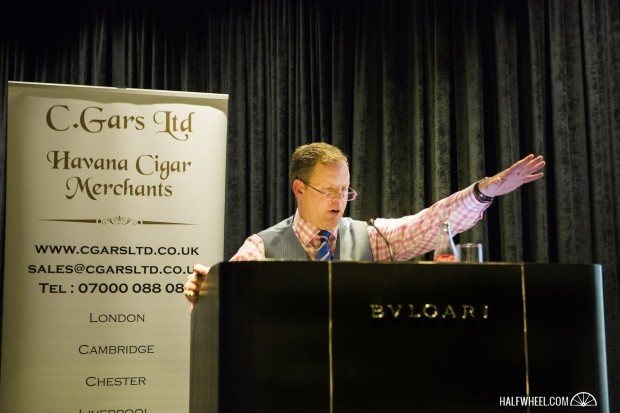 At 2 p.m. local time–a prompt 2 p.m.–the winter 2015 edition of the C.Gars Ltd auction started. At 3 p.m., the test fire alarm at London’s Bulgari Hotel went off. A weekly tradition, interrupting a biannual one. The four-hour event was a crossroads of perhaps one of the most formal and traditional activities—an auction of vintage and rare luxuries narrated by the voice of Jonathan Humbert—and the sometimes inconveniences associated with the conveniences of modern technology. When all was said and done, C.Gars Ltd had sold more than $780,000 worth of cigars to buyers around the world—some in the room and some surely in their own living rooms. For the first 100 or so lots, bidding in the room was minimal. Instead, online bidders, who were allowed to bid before and during the auction, scooped up all but a handful of the first third of the items, largely made up of post-embargo regular production cigars. While the action in the room might have been minimal, there were times in which the bidders were visibly stunned by some of the fury of online bidding. As the limited editions and pre-embargos began to hit the auction block, the room noticeably picked up. Inside the Bulgari’s Cinema Room was a mixture of British cigar royalty—Simon Chase and Edward Sahakian—collectors, proxy buyers for other collectors, buyers for high-end bars and hotels, other retailers like Sahakian’s son Eddie and some people just looking for a good deal on interesting cigars. Online, there were hundreds of others, some probably in their pajamas. In certain cases—like lot 57, a cabinet of Hoyo de Monterrey Double Coronas from 1998 which sold for £400 ($600), you could purchase aged cigars cheaper than they would be available in most stores, particularly in the United Kingdom. And then there were the Dunhills.

Nine lots of Dunhills, totaling just 98 cigars, sold for a combined £20,940 ($31,250) at an average of nearly double the median estimate price. Only one of those lots sold for below the median price. It, along with the results of the June auction where a box of Dunhill Tubos sold for triple the book estimate, shows that Dunhill prices are surging. As for the other highly-esteemed brand with a D, Cuban Davidoff, prices seem to have gotten under control. A total of 16 Davidoff lots were offered in the auction; 14 sold, but at only 10 percent over the median book estimate. It’s a sign that Davidoffs are cooling a bit after a few years of a meteoric rise. A little over a dozen lots of the total 359 were passed during the four-hour event, but at least some of those lots were sold by the end of the evening. Mitchell Orchant, the managing director of C.Gars Ltd, began hosting auctions in 2009 after Christie’s stopped offering cigars at auction. Since then, it’s grown substantially, now a biannual affair with live bidding in both the room and online via a proprietary software platform developed in-house. At times, operating a live auction, live video feed of said auction and live online auction platform had its issues, but for the vast majority of the 350 plus lots, things went smoothly and at Humbert’s quick, but fair, pace. That being said, the first 100 lots made it clear why the next auction, hosted on Feb. 28, 2016, will be an online-only affair. While the in-person auctions are not going away; over the years Orchant has expressed that hosting an in-person auction, with its added logistics and costs, when most of the action is online, can be, troubling.

Yet, there’s something unique about Humbert’s quintessentially British voice and British humor narrating the process of what is most certainly an old(e) world(e) activity. The good news is it seems the online auction might just be an addition to the two in-person auctions. This week’s auction added roughly 50 lots compared to the spring and an extra $100,000 in sales. For C.Gars Ltd, which collects a 15 percent premium from both the buyer and seller, it means at around 7 p.m. local time, the register tallied £679,900, just over $1 million in sales.

Disclosure: C.Gars Ltd covered the cost of a hotel in London for halfwheel to cover the event live.