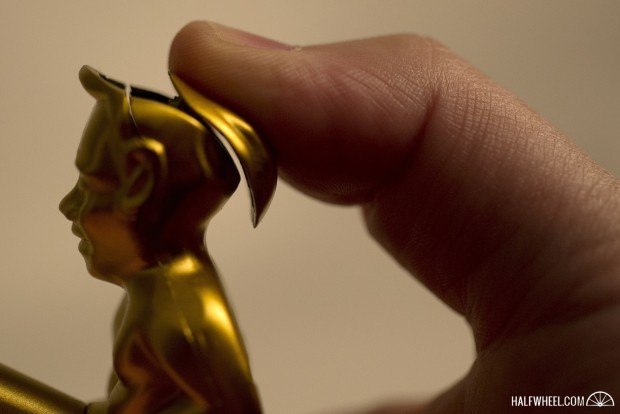 Editor’s Note: Our theme for April Fool’s Day has been serious reviews of not so serious products. A while back, Patrick Lagreid, who handles lighter reviews for the site, texted me asking me if he could review this lighter. A few clicks, $5.99 and about a month later—this lighter arrived at halfwheel.

What’s below is a serious review, of a product that will likely be referred to as the “penis lighter.” If that sounds like it might offend you, you can close out of this review and click on any other article on the site, as this is our only April Fool’s Day post.

If not, sit back, enjoy and keep scrolling.

At some point, the majority of cigar smokers will pick up a signature cigar-related accessory, whether it be a fancy humidor, cutter, ashtray or lighter. It almost becomes the accessory that their friends and smoking buddies associate with them because it matches their personality and style so well or is so unique that there is simply none other like it.

This lighter is one such piece—something that would be just as home on a display shelf as it would be in daily use, and certainly an accessory that is as distinctive as the person using it.

I would tell you the name of it, but the craftsmen and women behind this lighter seem to prefer working in relative anonymity as there is no branding on the lighter, nor on the plain white paper box it comes in. It’s a bit of a shame, but in some ways adds to the luster and prestige of owning such a lighter—no branding is necessary and if anything would only be distracting. When searching for it online, it is best to go with the generic term “penis lighter,” and you should have no problem finding this particular model, though it is worth warning you that several other models and designs will pop up, some of which are a bit more forward and lifelike than this design, which is almost more of a caricature than an accurate replica.

The more common description I have found is “gold man holding penis lighter,” but that can be a bit wordy to type in the search box. The eBay auction we purchased the lighter from did not include the word “penis,” instead, “Butane Gas Gold Man Jet torch Windproof Flame Cigarette Cigar Lighter Refillable.”

As if the concept of a penis lighter was not odd enough, inside the rather elementary crumpled up white “gift” box, there was this note from the eBay seller. 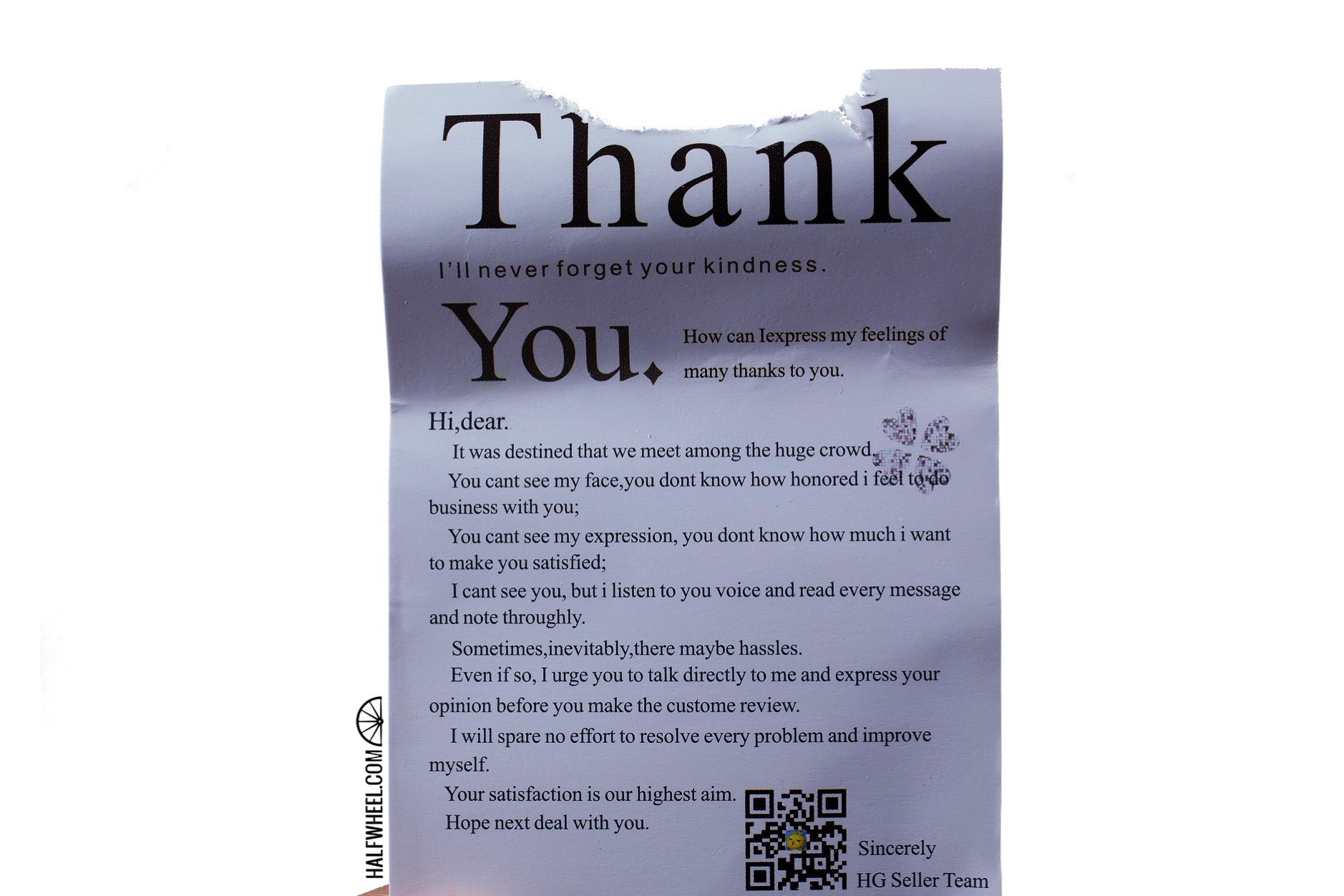 One of the first things that cigar smokers tend to want to know about a lighter is how big it is, and whether it’s comfortable to use on a regular basis. It’s a bit hard to judge the size of the lighter by the picture on the eBay listings where I found this, though some do show it in the hand so you can get a bit better idea of its size. I was a bit underwhelmed by the size of the penis lighter when it arrived in the mail as it was smaller than I was anticipating; the figure stands about 2 3/4” tall and is approximately 2 1/2 inches from rear to tip. Fortunately, the lighter fits nicely into the hand and allows you to wrap your fingers around it for a secure grip. The shape of the lighter is probably the most awkward part about it, though it’s certainly not an obstacle to quickly getting familiar with the unit. 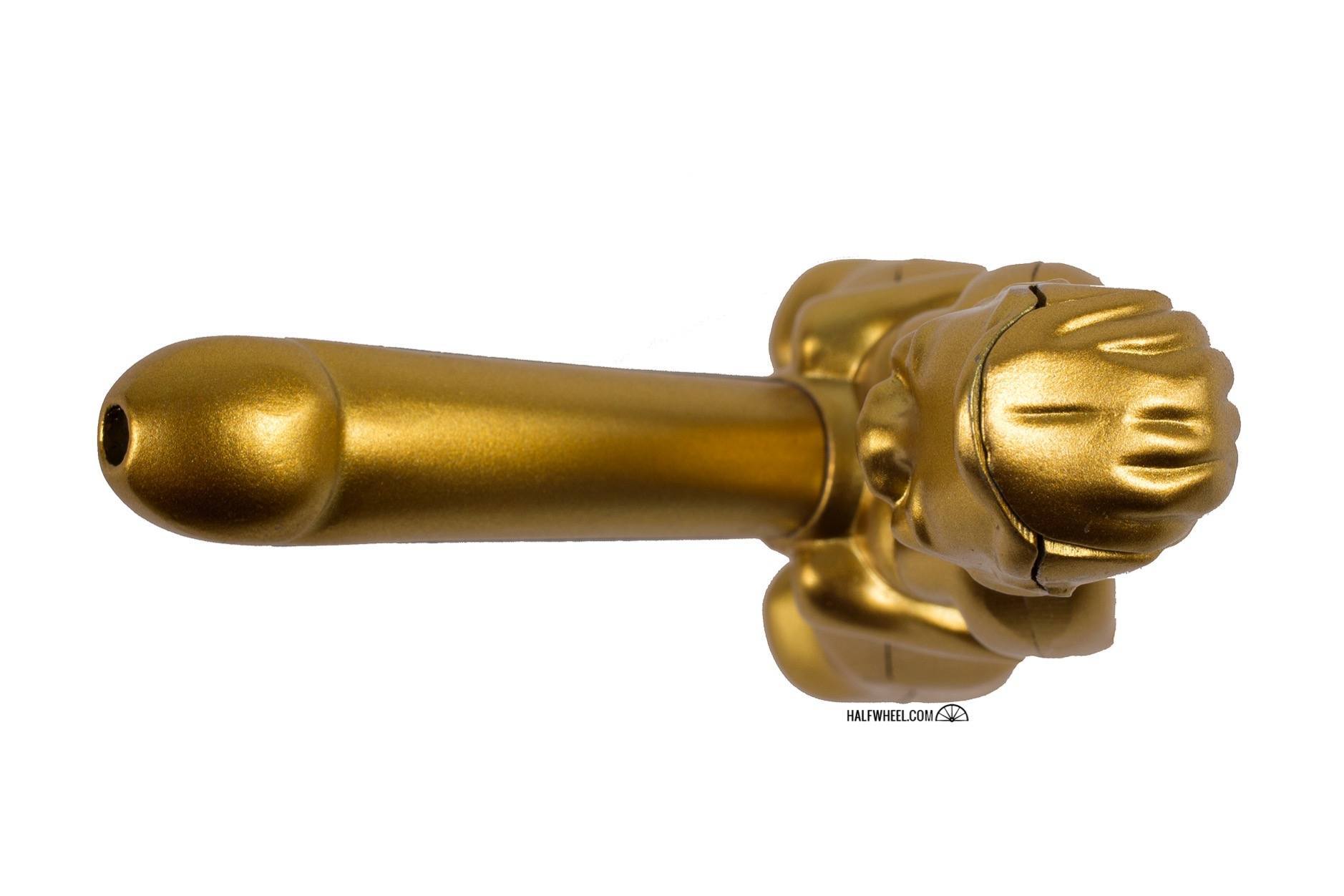 The size and shape of the unit brings up my first gripe with the penis lighter: balance. Because of the lighter’s long shaft, it’s not the most balanced of units and requires a bit more focus to keep it upright when you’re setting it down, and it is fairly easy to knock over which could cause damage or scraping of the finish. As most guys know, there are few things worse than taking a shot to that area and I’m fairly confident the same thing goes for this lighter. Every time it got knocked over, I almost felt sympathy pains for the little guy, much the same as I do when I’m at a baseball game and see a catcher or umpire take a foul ball in that most sensitive of areas. 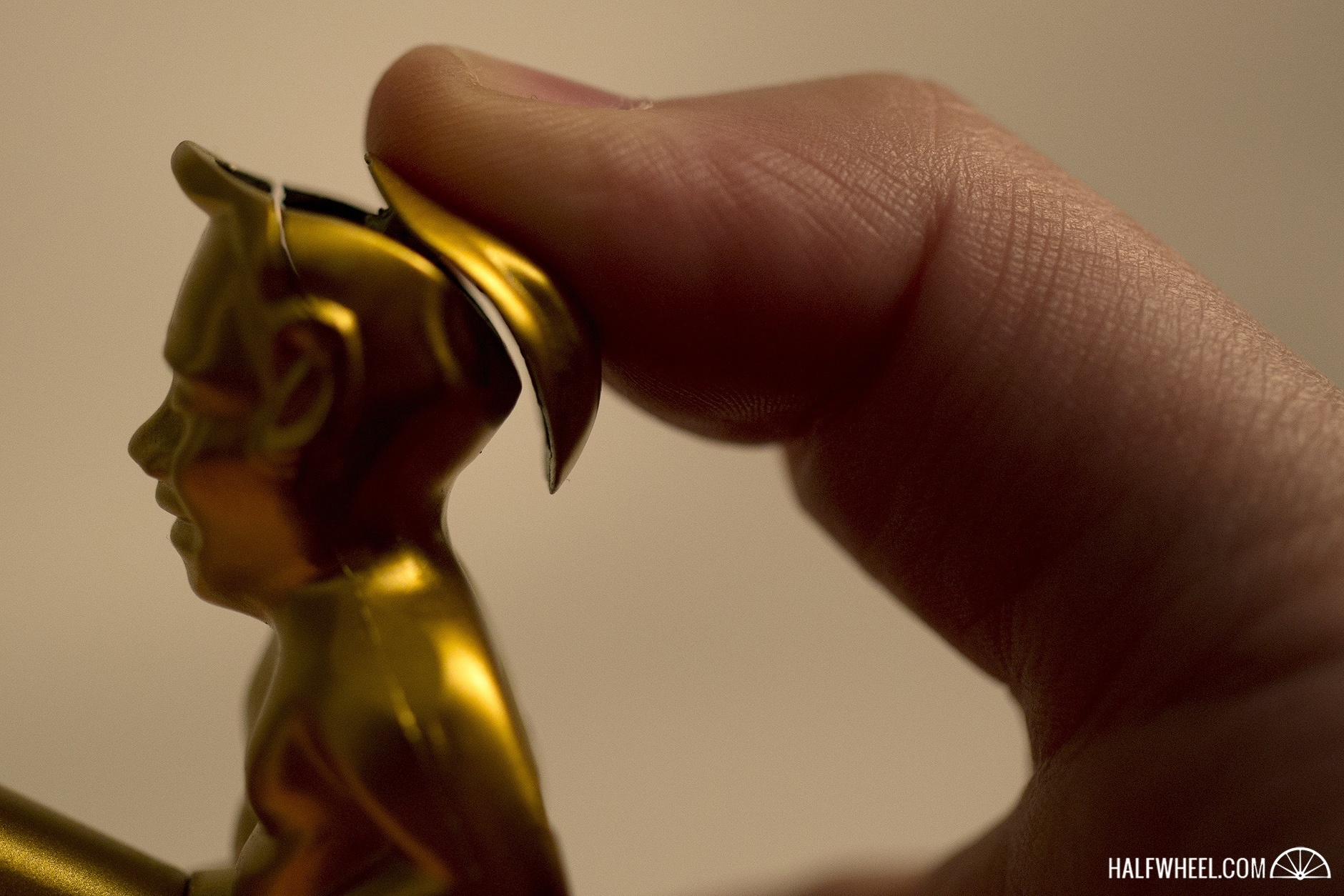 The ignition function is built into the head of the figure, in particular his scalp, which pulls back on a lever to get the gas flowing and provide a spark to get the single flame lit. It’s a bit of an awkward movement at first and I’m a bit concerned about the long-term durability of the mechanism, but it’s a quick motion to learn and for the most part has worked well over the several weeks that I have been using the lighter. 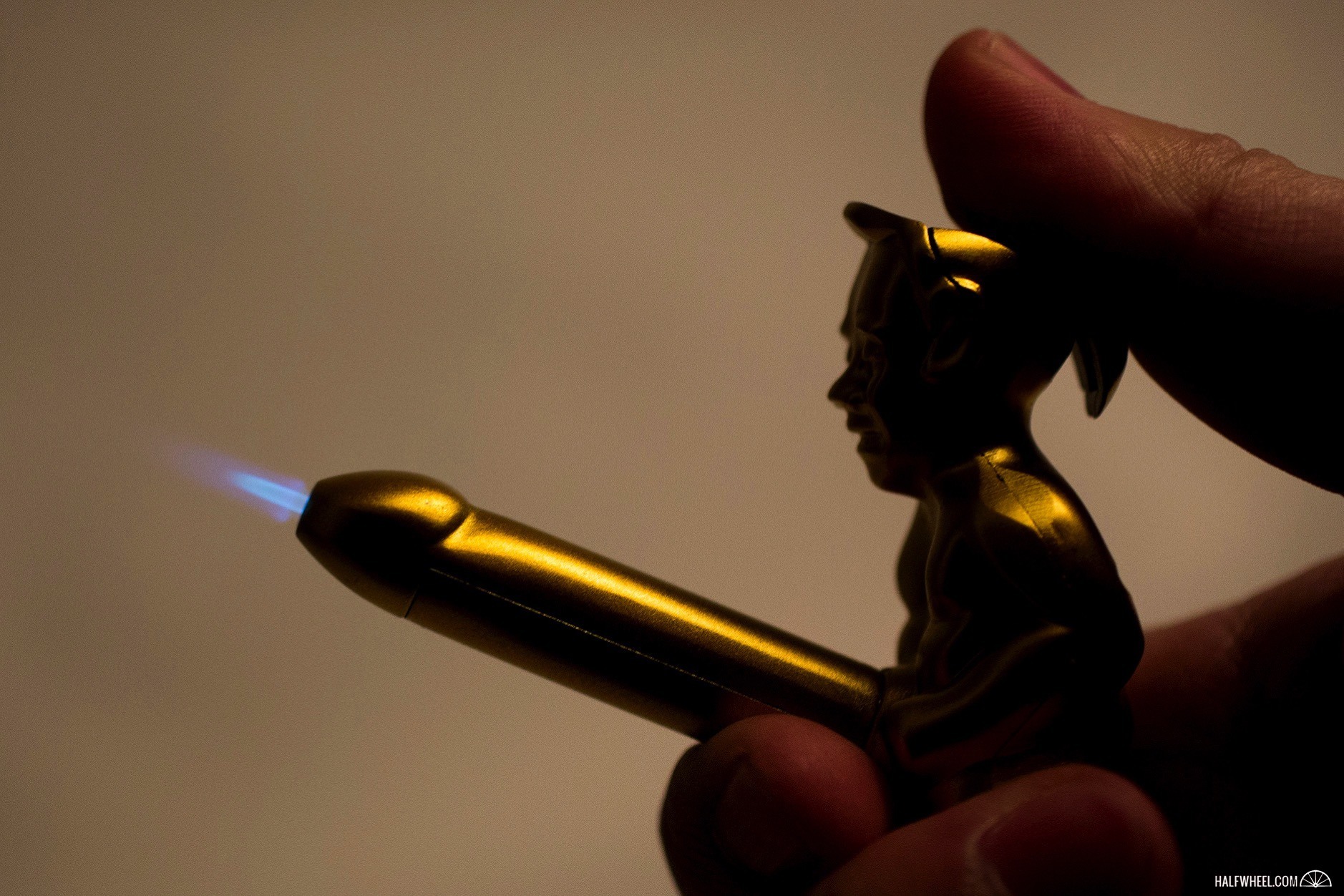 The flame that comes out of the penis lighter certainly isn’t the biggest you’ll find from a cigar lighter but with a skilled technique it more than adequately gets the job done.[ref]A few back-and-forths and up-and-downs and pretty much any cigar will be evenly toasted and ready to go.[/ref] I used it on a number of different size cigars and it had no problem handling any of them, and in most cases gave me one of the more accurate flames I can recall using. 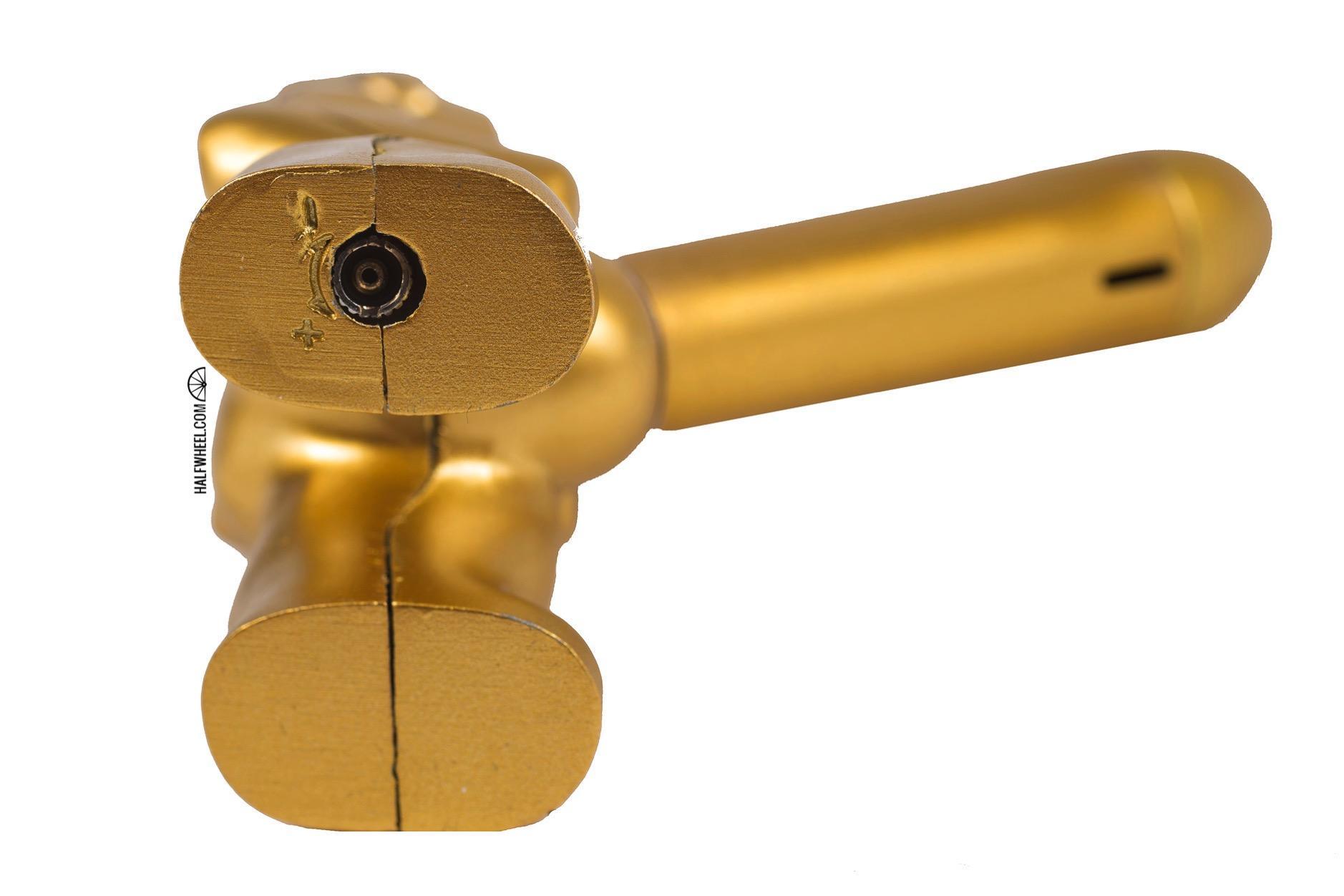 To refill the lighter, simply flip it over and you’ll find a standard fuel valve in the bottom of the right foot as well as a flame high adjustment knob that requires a small screwdriver or similar flat tool to adjust. This is where the second problem came in: getting the lighter to work once the initial batch of fuel was depleted. I have no idea what kind of fuel came with the lighter, but when I refilled it with XIKAR’s PuroFine butane, it simply would not light. I bled the lighter to make sure there was fuel in the tank and sure enough there was, and I could hear it as I pulled back the ignition lever but simply got no flame. Each time I pulled back the gold guy’s scalp I saw a spark just inside the tip of the penis lighter, so that seemed to be working.

Turning the flame wheel did nothing to help other than making the sound of fuel leaving the lighter louder as I cranked it up and increased the flow. I even went so far as to try and light the lighter with a match and didn’t get much of a result, though I could see the fuel burning, but it simply wouldn’t stay lit. I’m certainly not an expert on the mechanics of getting butane to burn properly, but when it came to using XIKAR’s fuel, the penis lighter just wouldn’t work. Quite simply, the penis lighter seems to be a one-shot wonder, as once the initial batch of butane ran out I could not get it to fire up again. Maybe it needs a different fuel to function—unfortunately I don’t know since the lighter didn’t come with any instructions or suggestions on use, and I’m not likely to buy several cans of fuel trying to figure out which one will do the trick. 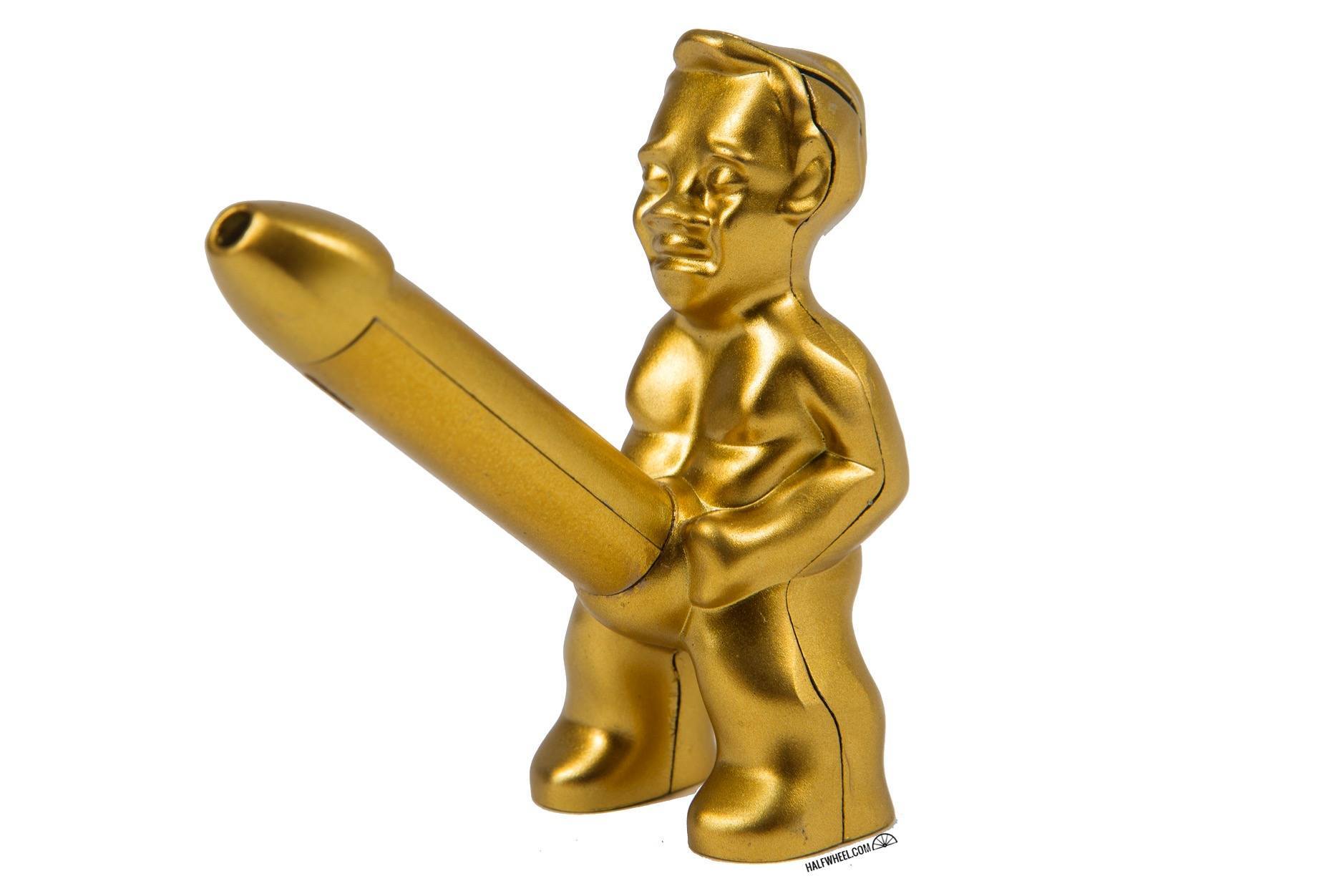 At generally less than $10 on eBay—and that includes shipping—the penis lighter is a fun item to add to your collection or give as a gift to a friend, though I’m wary to recommend it as an everyday accessory. It’s not the most detailed of designs, and I wouldn’t mind seeing him wear a bit more of a smile given his state, but I’m not complaining. With the issue about refilling the lighter rendering him fairly useless, I’m planning to put this little guy on a shelf and remember the good times we shared lighting a couple of cigars while he casts a watchful eye and provides a manly salute to my future cigar smoking endeavors.