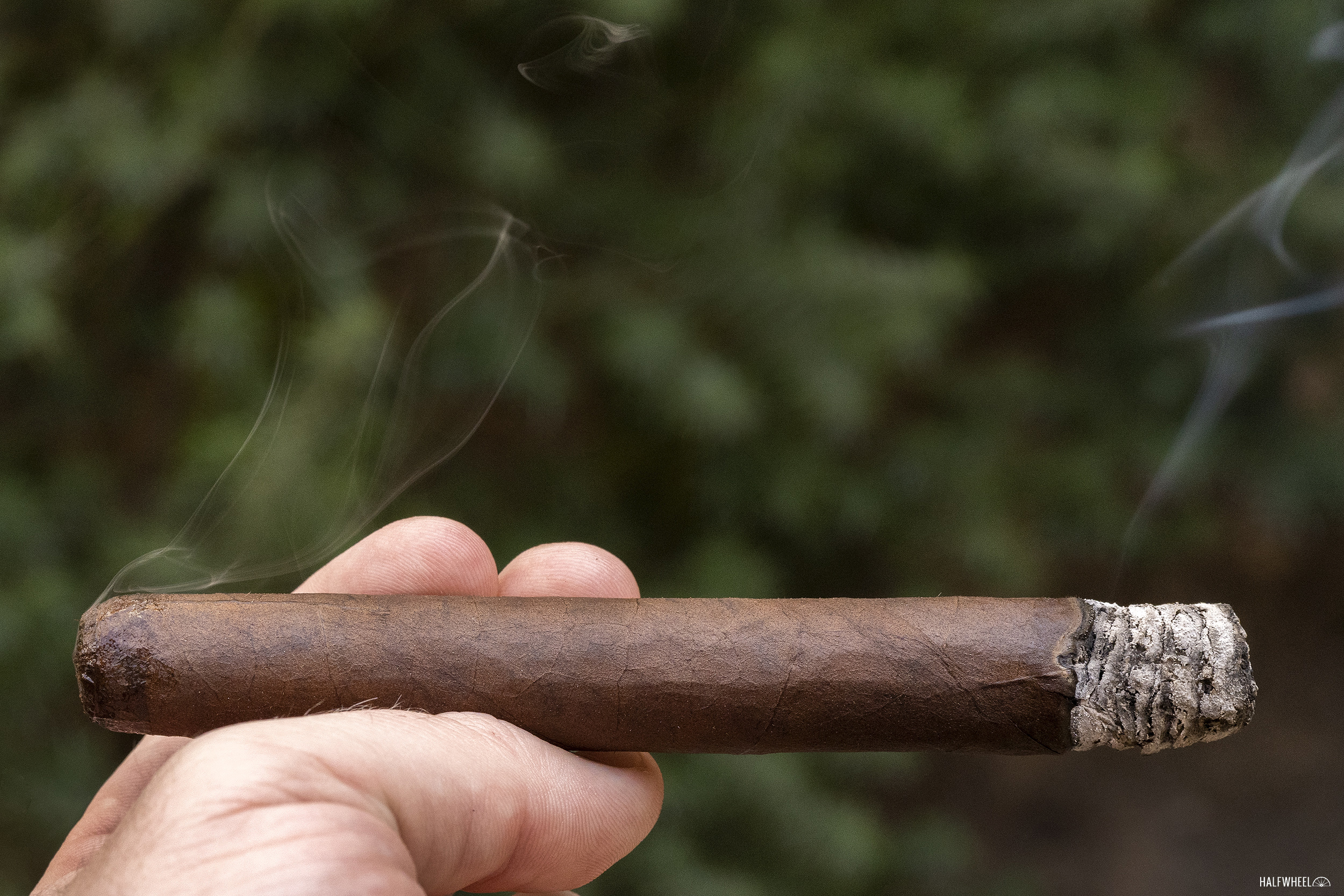 As I was looking for an interesting opening for this redux, I had to look back to see when Crowned Heads’ first cigar, Headley Grange, debuted. It was way back in the summer of 2011, which means that the company founded by Jon Huber and Mike Conder has been putting cigars on shelves for 10 years now, which is an impressive accomplishment, to say the least.

Needless to say, along the way, Crowned Heads has build an impressive portfolio of cigars, from regular production lines to limited editions as well as regional exclusives, and has done so working with several factories. In fact, its first production with one factory, La Gran Fabrica Drew Estate, was to produce a regional exclusive for a state not often associated with such things: Ohio. That cigar is Buckeye Land.

“We’ve garnered a strong following in Ohio over the years,” said Jon Huber, co-founder of Crowned Heads, in a press release. “That state also holds a special place in my heart as my wife was born in Lancaster, Ohio. Her maiden name is ‘Land,’ hence ‘Buckeye Land.’ We could not be more excited to be working with Willy Herrera and Drew Estate on this project. I believe Willy and I share a similar admiration for the artistry and tradition of cigar-making, and as such, the creative process of this particular project was very fluid.” 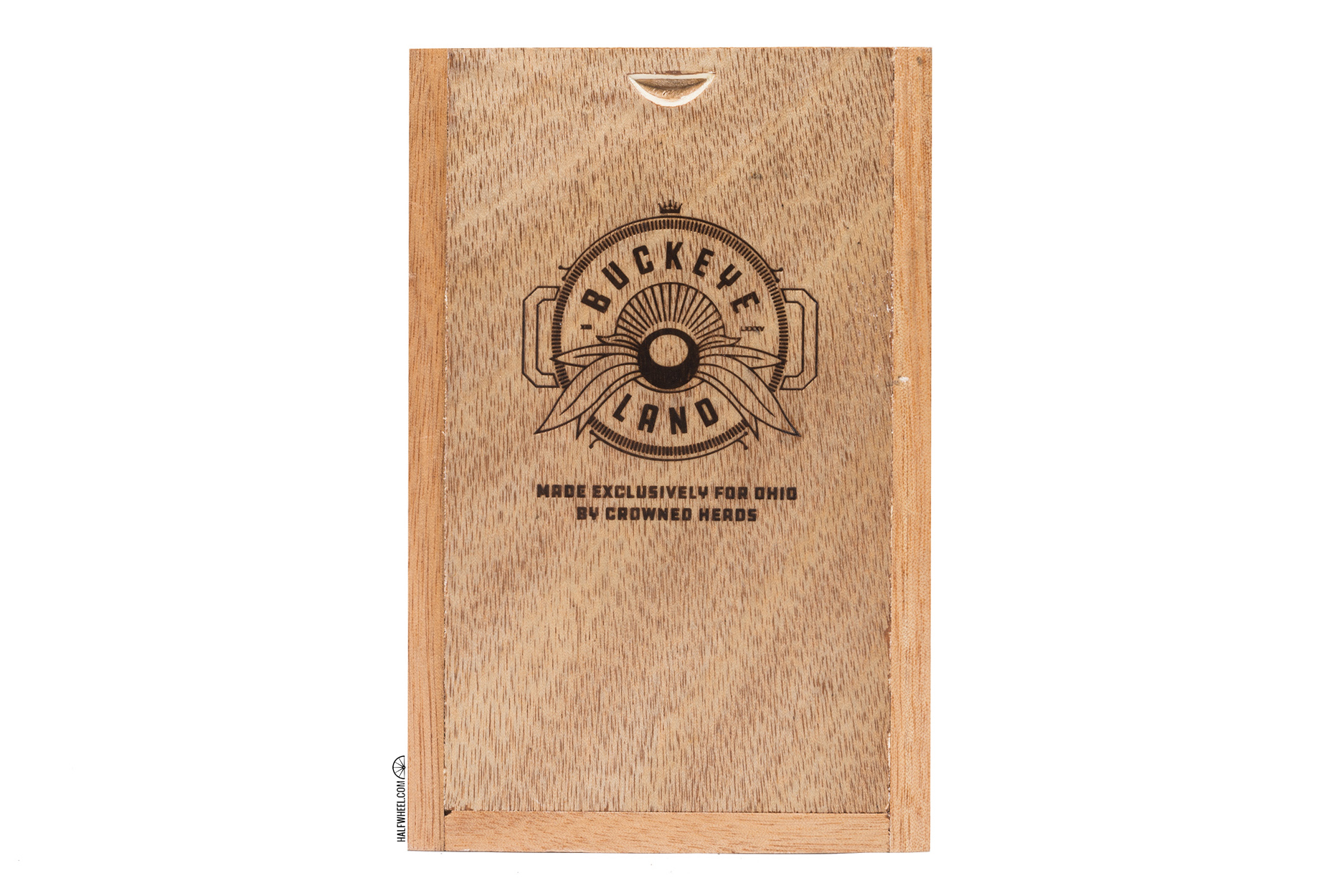 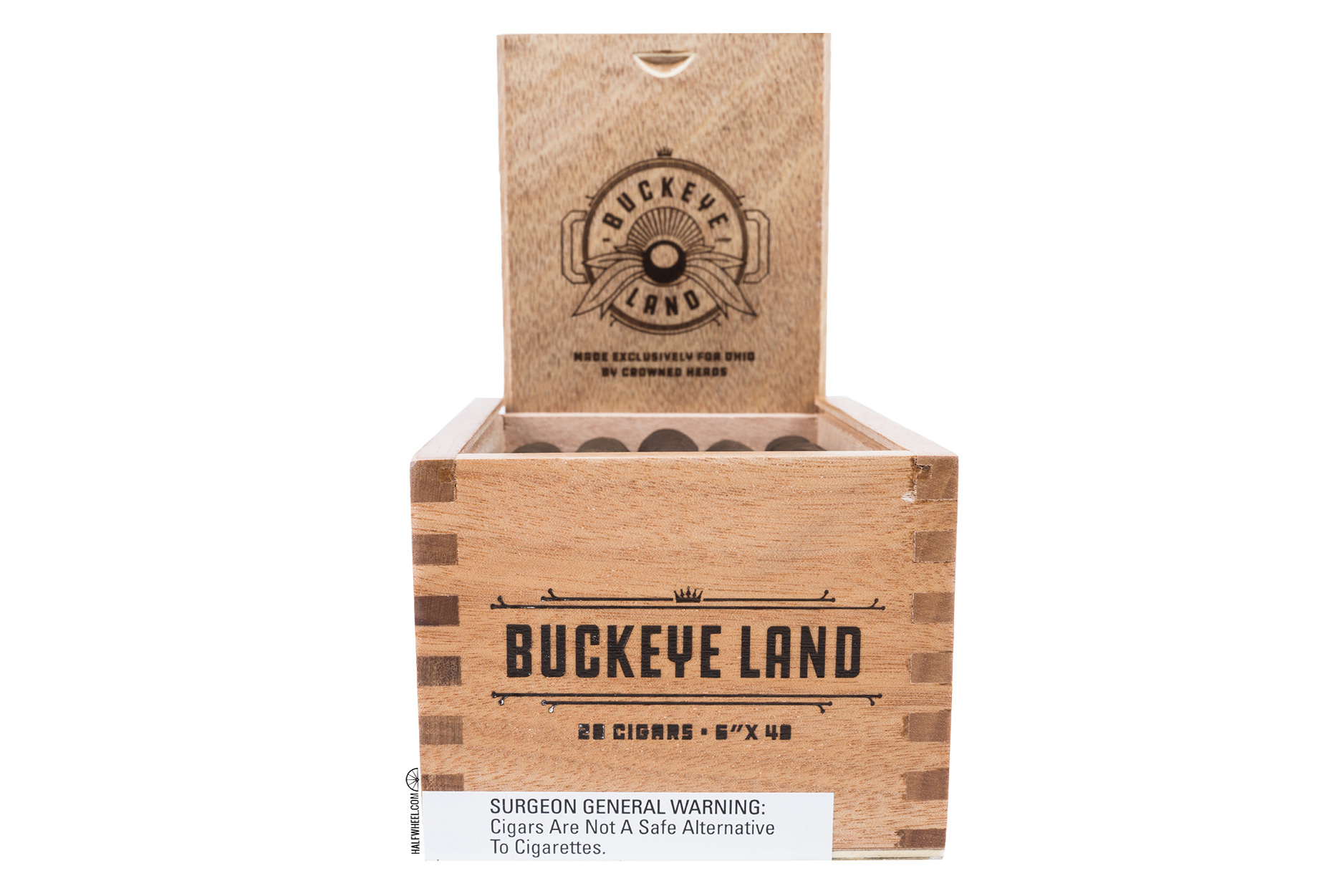 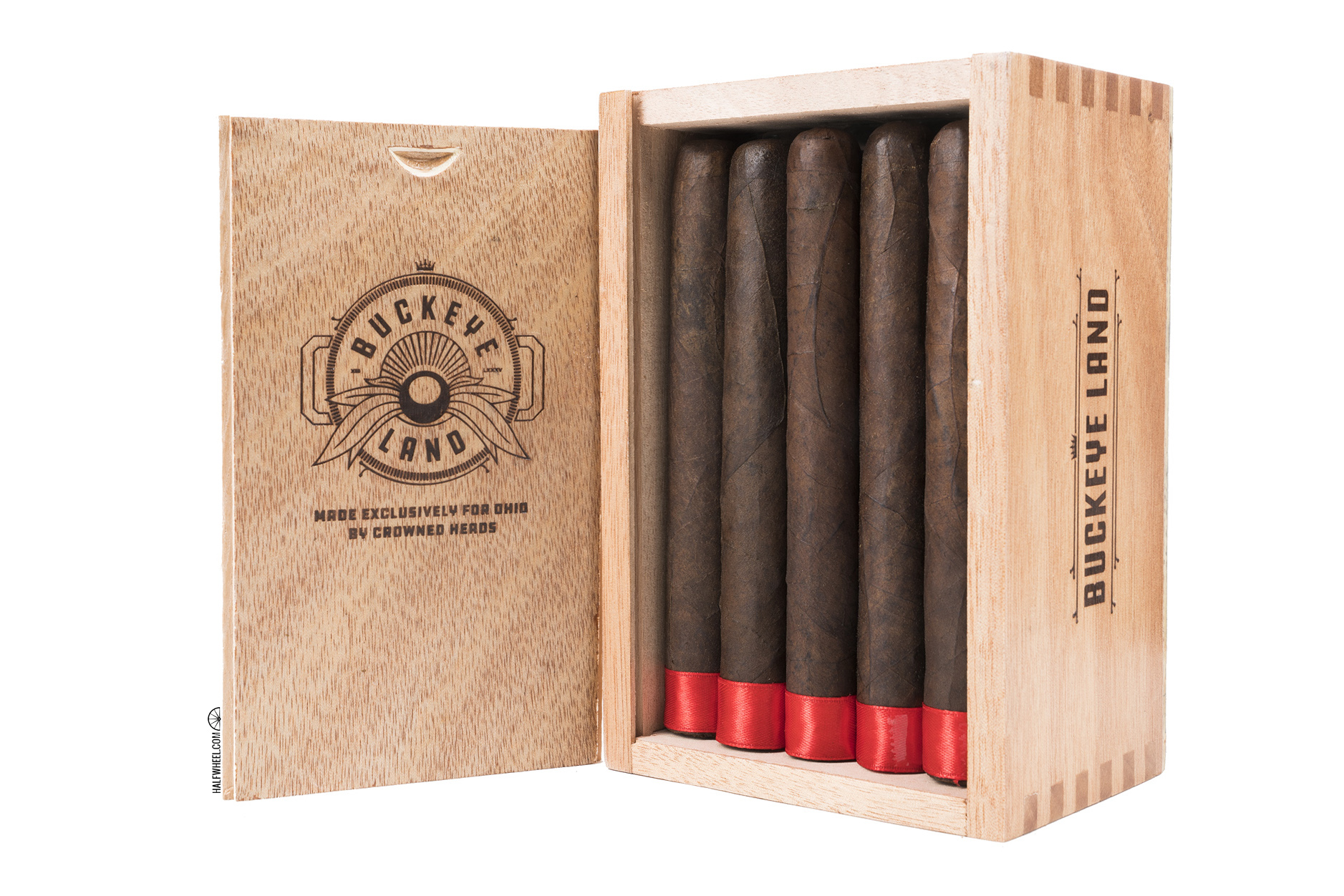 Buckeye Land uses a Mexican San Andrés wrapper and Connecticut broadleaf binder, with the filler coming from Nicaragua and Pennsylvania. It is available in a single 6 x 48 corona vitola priced at $9.60 per cigar and offered in boxes of 20 cigars.

When it was released in October 2018, it became the fourth regional edition release for the company, though one of those—Paniolo—was a store exclusive for R. Field Wine Co. in Hawaii. 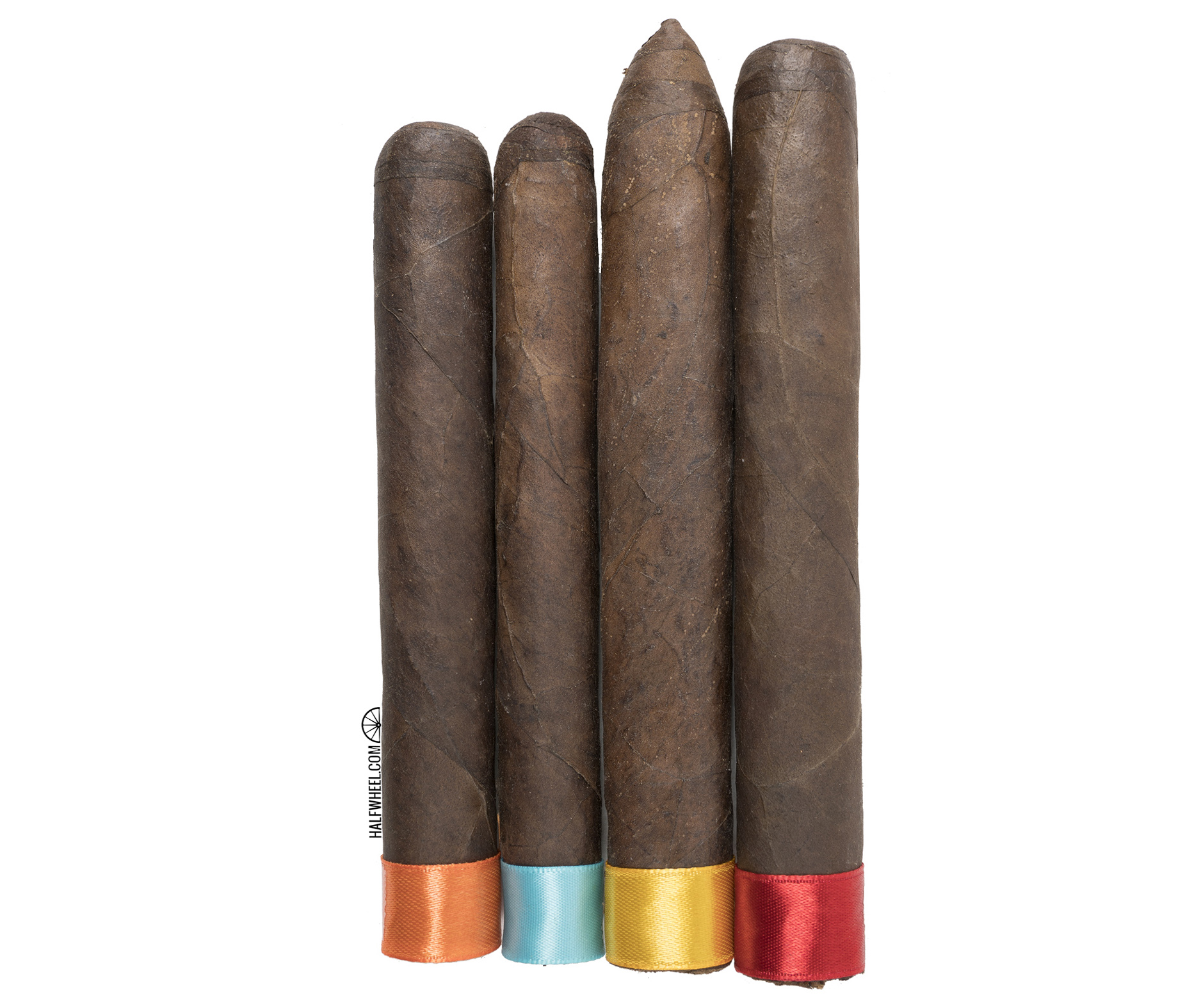 While this may be a regional release for Ohio, it isn’t quite a complete exclusive for the Buckeye State, as on Nov. 1, 2018, Crowned Heads held its second annual Lawless Day, where the company opens up sales of three of its regional editions to retailers around the country. This means that stores can purchase Buckeye Land as well as Tennessee Walts and Yellow Rose, regardless of where they are located. The one exception to that is the Paniolo Especiale.

Here’s what I said about Buckeye Land when I reviewed it in December 2018:

Much like with the news stories, I’m not quite sure about where to start with Buckeye Land. The flavor profile is quite good if a few ticks short of spectacular, largely due to the final third that becomes a bit too focused on earth and pepper instead of the complexity that the first two thirds did such a remarkable job to achieve with such seeming effortlessness. The construction is impeccable, and the overall experience is very enjoyable. While I’d normally call it a shame that such a good cigar is only available to a limited number of retailers, thankfully Lawless Day and the internet make it a bit easier to get your hands on, something worth doing as this cigar easily earns its accolades. 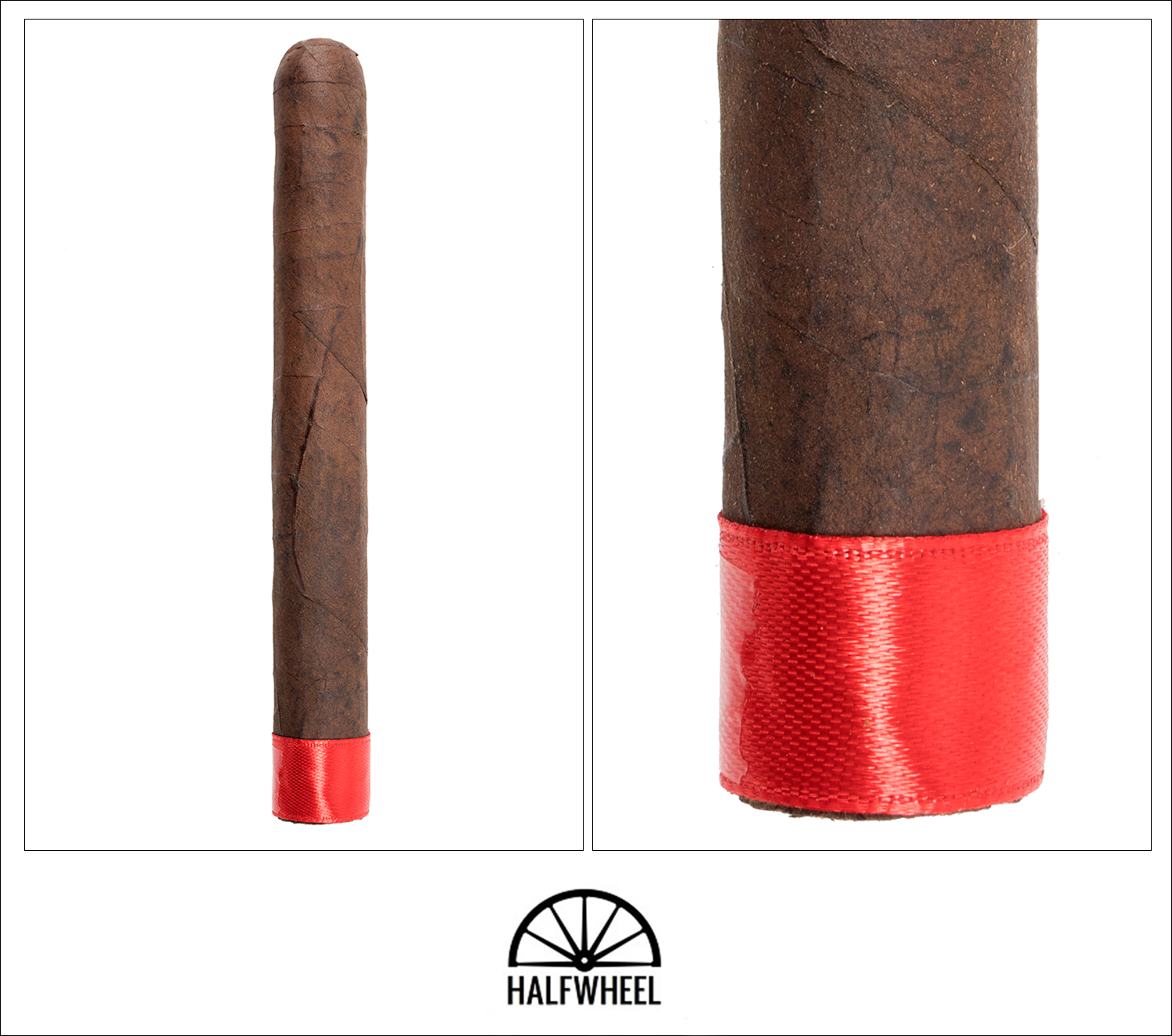 Cigars like Buckeye Land are reasons I’m glad both corrective eyewear, blank cigar bands and sites like halfwheel exist. The logo on the UPC sticker is small enough that I have to almost squint to read it, and if I had taken the cigar out of its cellophane, I would be left with an unmarked cigar except for its red foot band, assuming I hadn’t added my own band of course. The wrapper leaf has a suppleness to it that the fingers pick up immediately, with just a bit of oiliness, even though it’s not as apparent to the eye. It’s a meaty brown cover leaf with some small but distinctive veins, a bit of mottling in spots and what looks like a very small bit of toothiness. The cigar is still firm when inspected, with a bit of a softer spot just below the head but nothing concerning. Seams are flat, the cap is affixed well, and the cigar looks very good overall. The foot is mild but rich with earthiness, reminding of stepping into a freshly tilled field. I could make the case for faint chocolate and a bit of woodiness, while pepper is non-existent. The cold draw is very smooth and much drier, tasting a bit like white toast at first encounter. It is also quite mild with no appreciable pepper.

The Buckeye Land opens up with flavors about where I’d expect given the cold draw and prelight aromas: there’s the dry toast up front, a bit of chocolate in the middle, and then some of the earthiness at the base, though it isn’t as intense as it could be in other cigars, or as I might generally want. There’s a bit of a lingering finish from the earth and some minerals, though I don’t get much in the way of pepper in the early goings. Smoke absolutely pours off the foot, so much so that I check the notes to see where this cigar was made, and sure enough it hails from La Gran Fabrica Drew Estate, a factory known for producing very smoky cigars. A bit of creaminess enters the profile before the first clump of ash drops, and while it doesn’t overtake the flavor, it seems that the other flavors back off just a bit. There’s something that leads my palate and brain towards thinking of a milky latte, but it’s just not quite there at the moment. A bit of dry wood shifts my attention from that thought with a subtle nudge. The burn line progresses through the first third without much change, though the second third brings about a dry black pepper that shakes things up a bit both on the palate and via retrohales. It’s a peak in flavor intensity that gently comes down a bit with more creaminess and touches of the staple flavors thus far: chocolate, earth and wood. Pepper is relegated to the nose, offering a punchy accent on retrohales. Flavor is balanced and doesn’t veer too far from medium territory, body is medium-plus, and strength isn’t quite at medium. Construction is fantastic and problem-free thus far.

For me, the second half of the Buckeye Land begins a bit further into the second third than what would be the visual midway point, as the flavor picks up a bit more earthiness and with it, a bit more black pepper and some gruffness that ever so slightly grates the back of my tongue and throat. There’s a bit more smokiness to the flavor and aroma as well, which makes for a rich and very pleasant smell while the cigar is at rest and still putting off fairly copious amounts of smoke. By the midpoint of the final third, most of that harshness has left the cigar, returning it to the same mix it has offered most of the way, minus the overt creaminess. It dabbles with the robust earthiness the rest of the way, bringing it back before dialing it back, leaving a lingering tingle on the tongue with each puff. The final inch is by far the most full and robust in flavor, as there is still some char to be found, pepper goes off whatever leash it had been on and the earth intensifies as well. The strength also begins to build in the final inches, and I can feel the nicotine having a bit more of an effect in my system as the end of the cigar nears. Flavor in the second half is medium-plus, as is body, while strength builds to medium-full just before the cigar wraps up after about two hours and 15 minutes  of smoking time. Construction was overall very good, with plentiful smoke, an even burn line and generally very good combustion, assuming regular puffing rates.

The Buckeye Land was a very good cigar two years ago and it still is, maybe even a tick better in terms of how the flavors have come together. There is a steady progression of flavors and combinations, and while they all worked well when originally reviewed, they seem to do so even better now. There is also a noticeable increase in the intensity of flavor from start to finish, yet it's not until the very end of the cigar where anything gets even slightly out of balance. The construction is very good and the overall experience remains very enjoyable. Buckeye Land was and is a cigar that is easy to enjoy and hard to find much fault with, and definitely one that merits smoking whenever the opportunity arises.