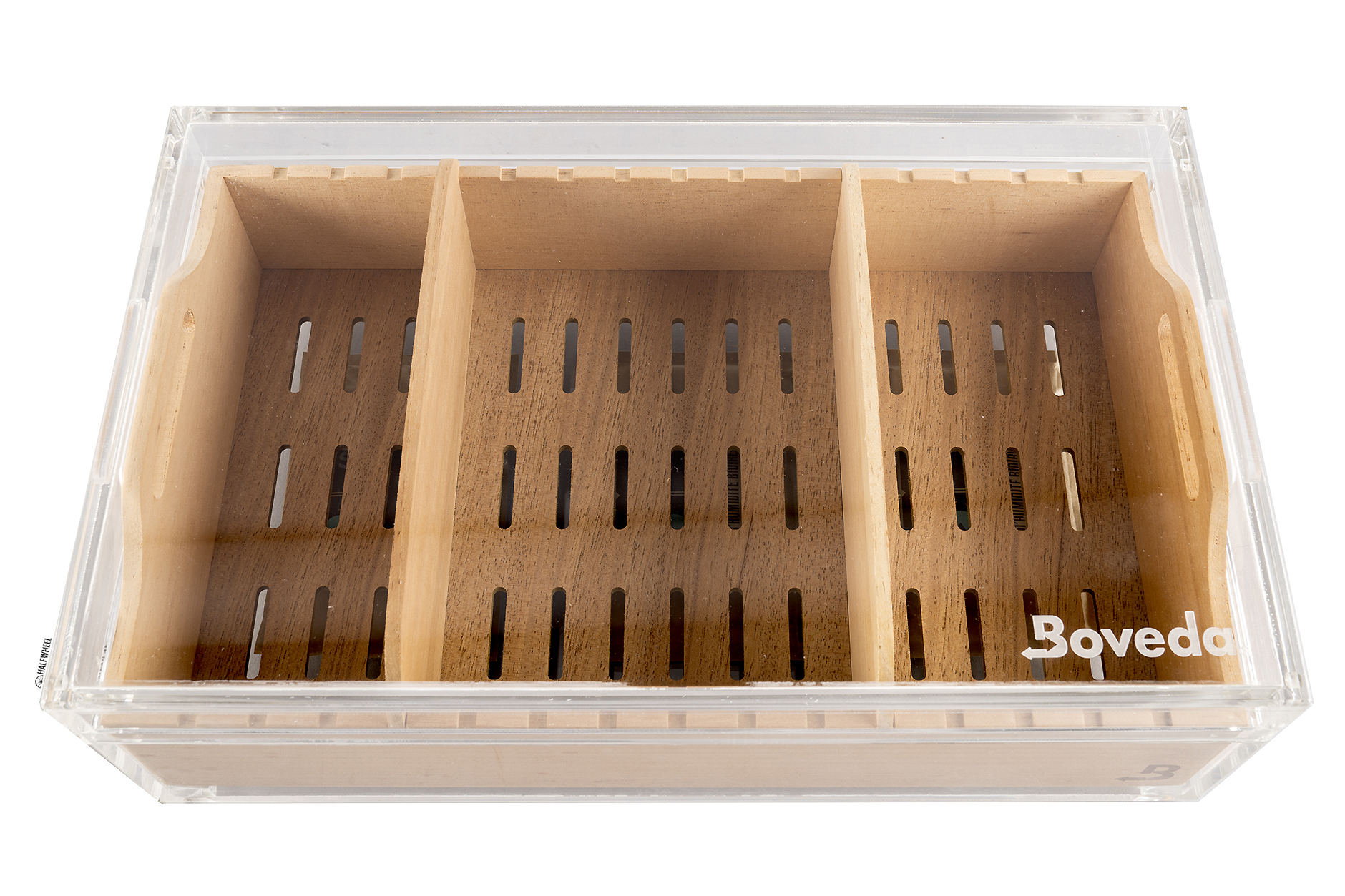 My most recent accessory review was the final in a series of seven sub-$175 wooden humidors. I started all those reviews explaining why I decided to specifically look at those humidors and that price point. Buried further down in that review was this description of a humidor that I have used for years and one that almost would have qualified for the most recent series. It’s the Boveda Large Acrylic Humidor and there were four reasons as to why it wasn’t part of the series. The first is that I already reviewed the humidor, the second and third are explained below:

My thoughts on the old model are that the humidor is just over the $175 price point but would otherwise be the recommended option. It’s a large, see-through plastic box with a removable tray that allows you to show off your cigars. More importantly, it’s plastic, which means you don’t need to worry about seasoning it and really don’t need to worry about the seal. It just works. The issue with the Boveda is that it just doesn’t look like what most people think of as a humidor.

And the fourth is that Boveda updated its Acrylic Humidor design in mid-2021. While the new model is more or less the same design and concept that I loved, it’s not identical and the changes are impactful. 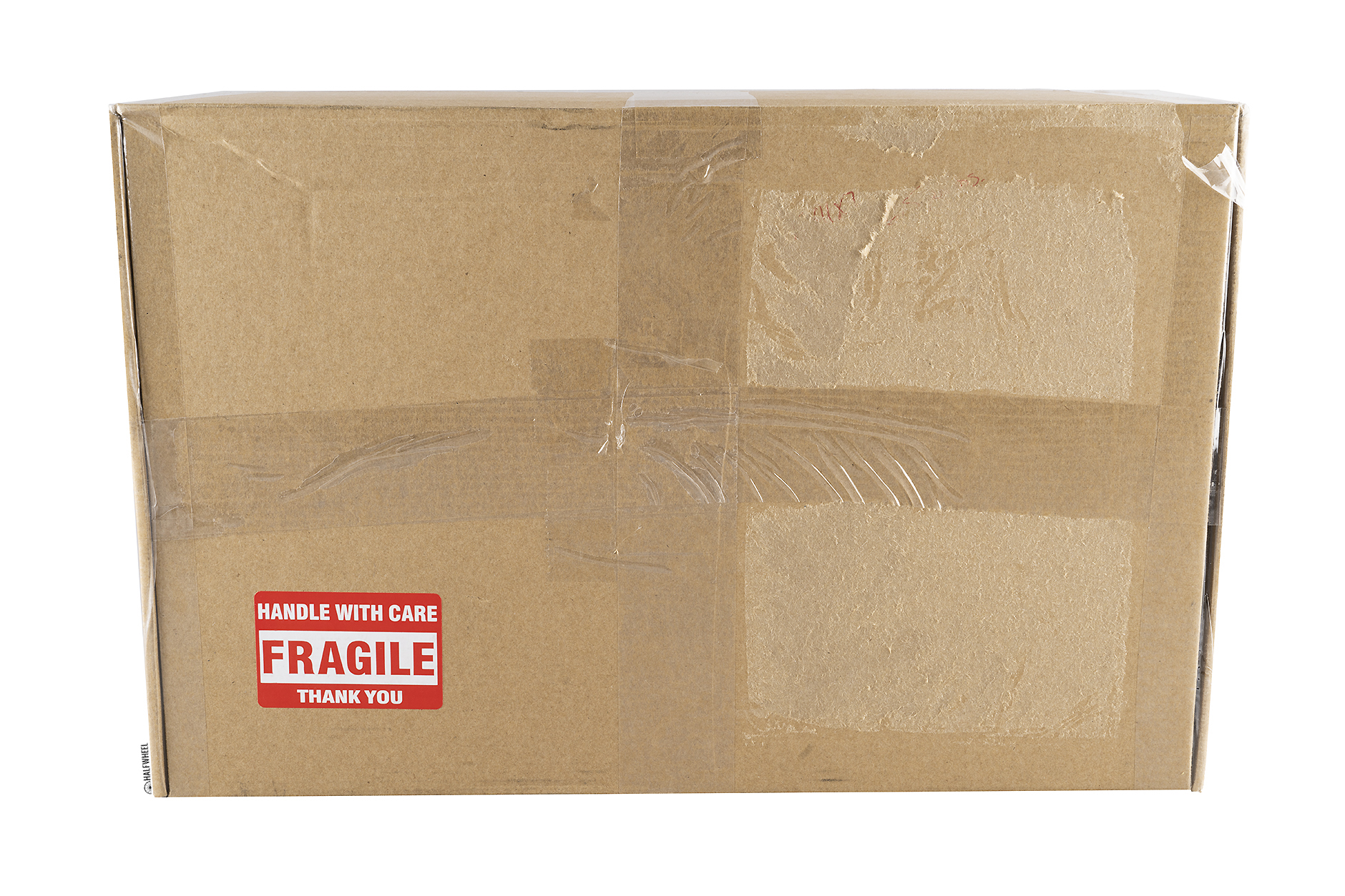 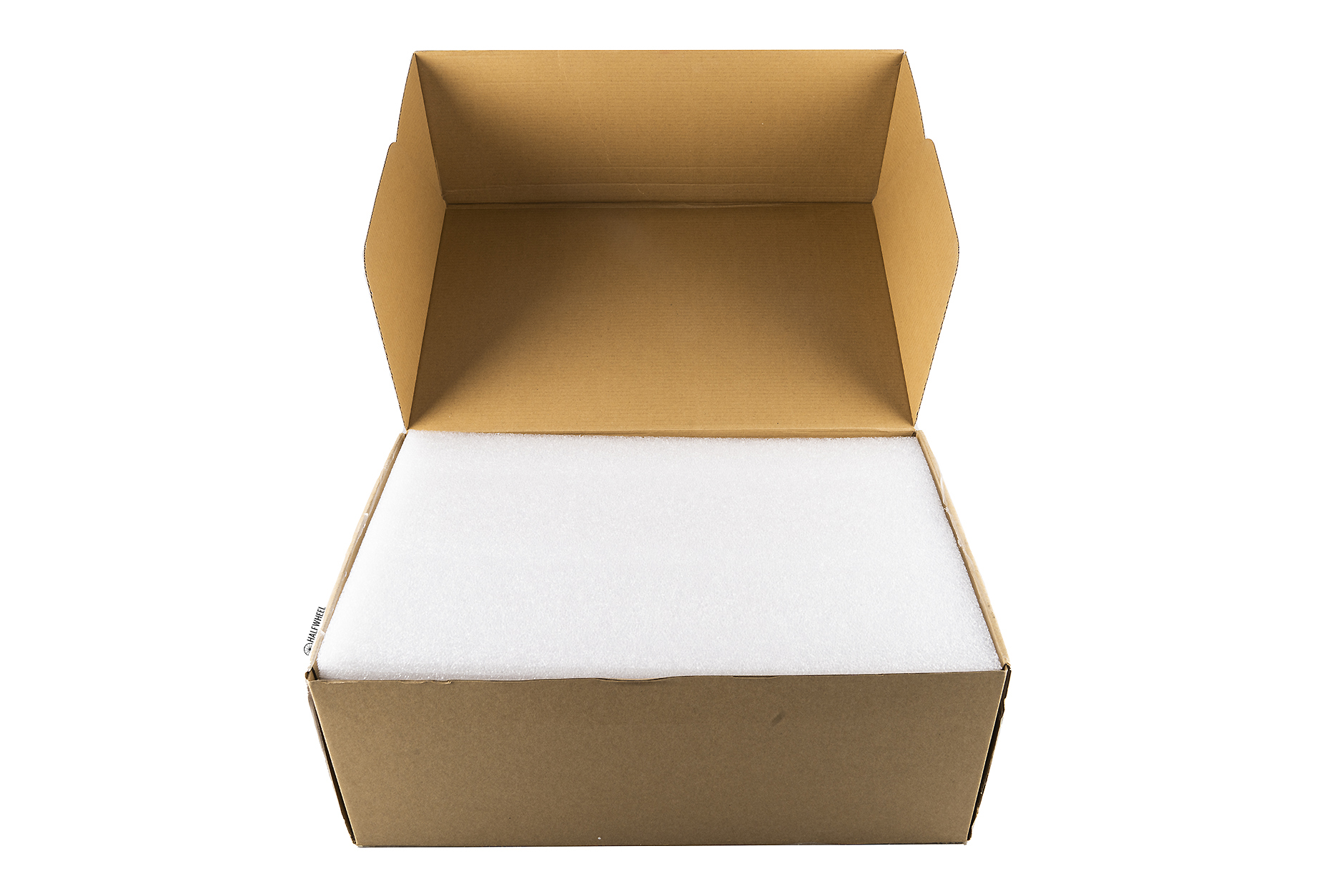 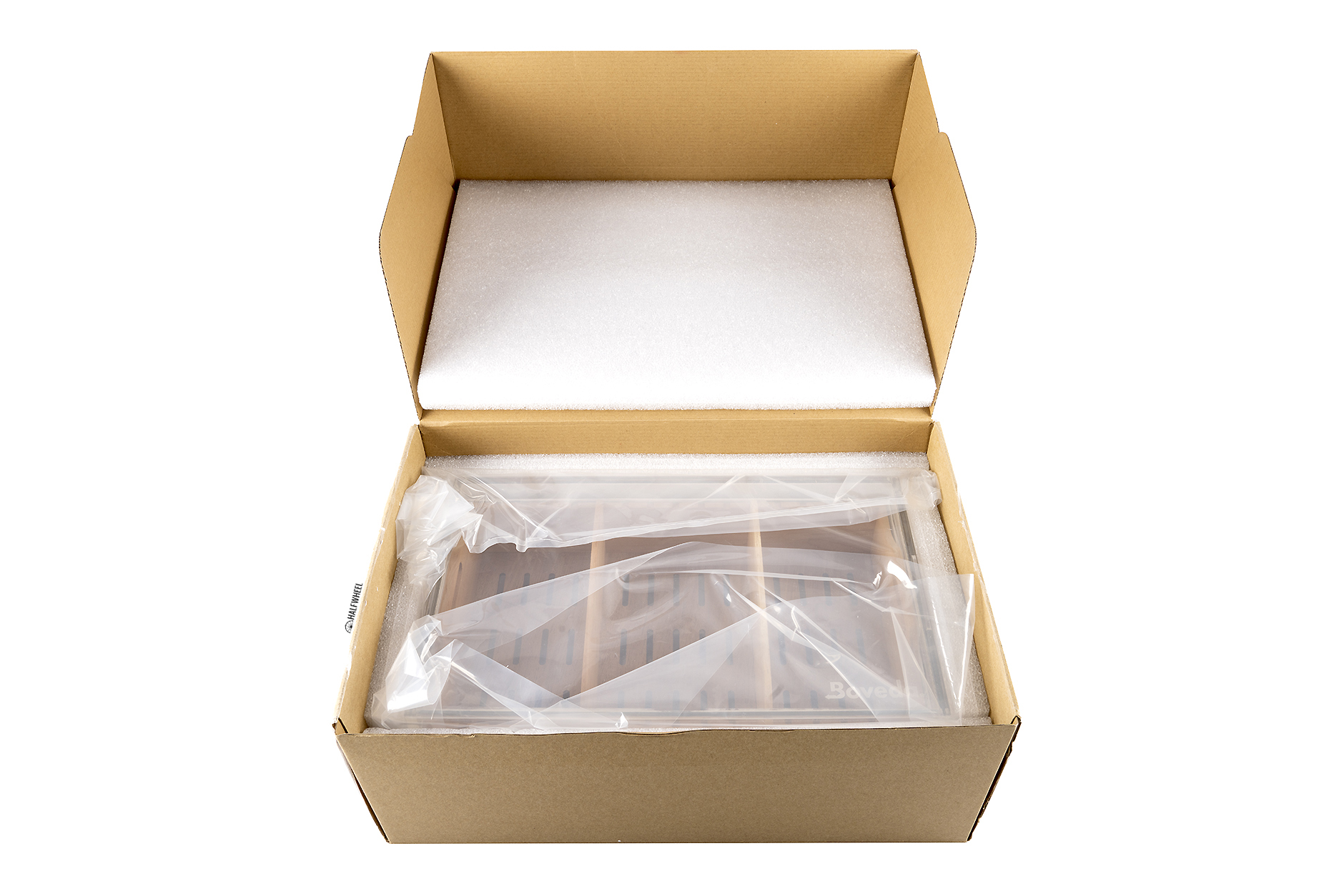 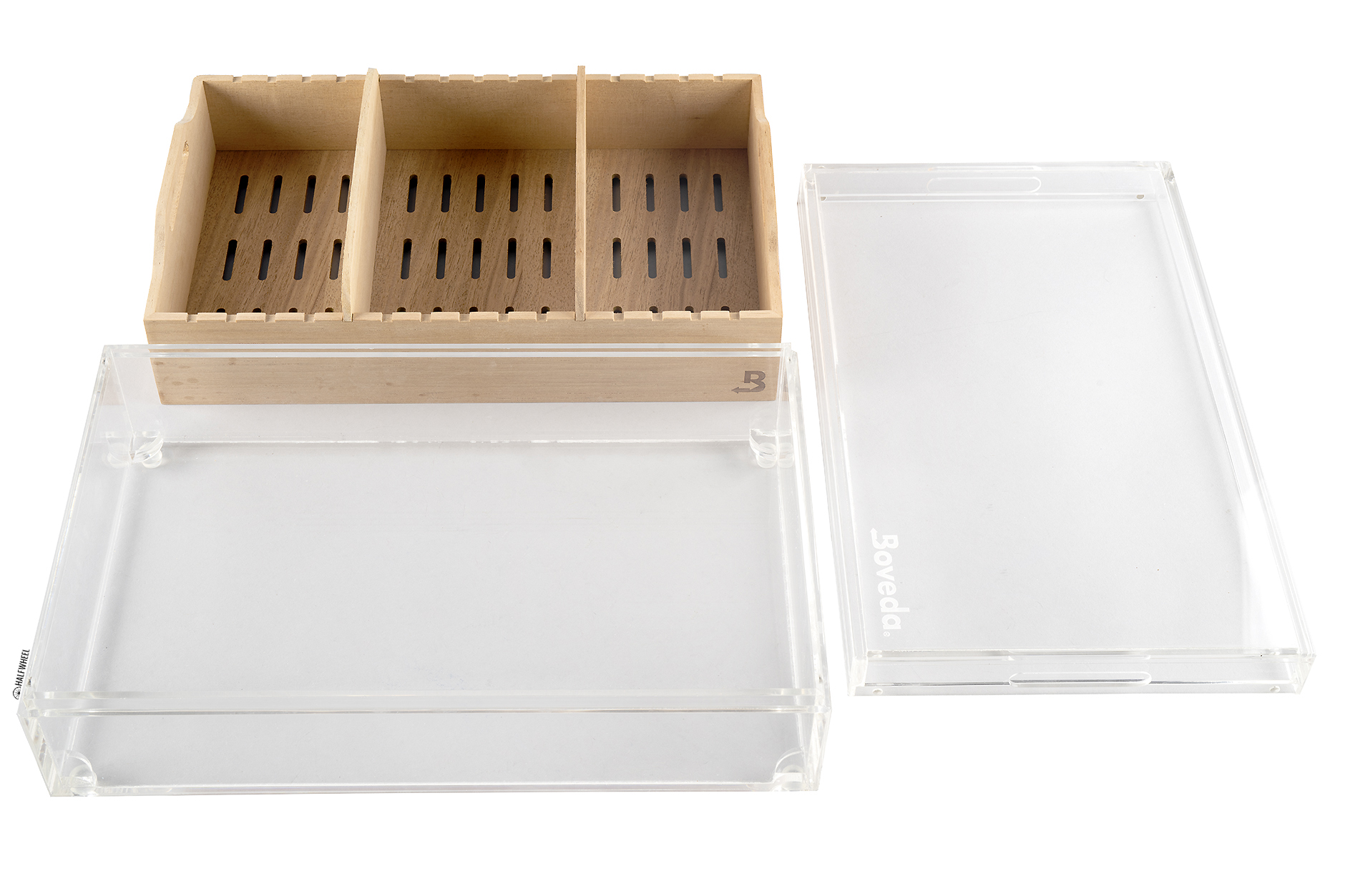 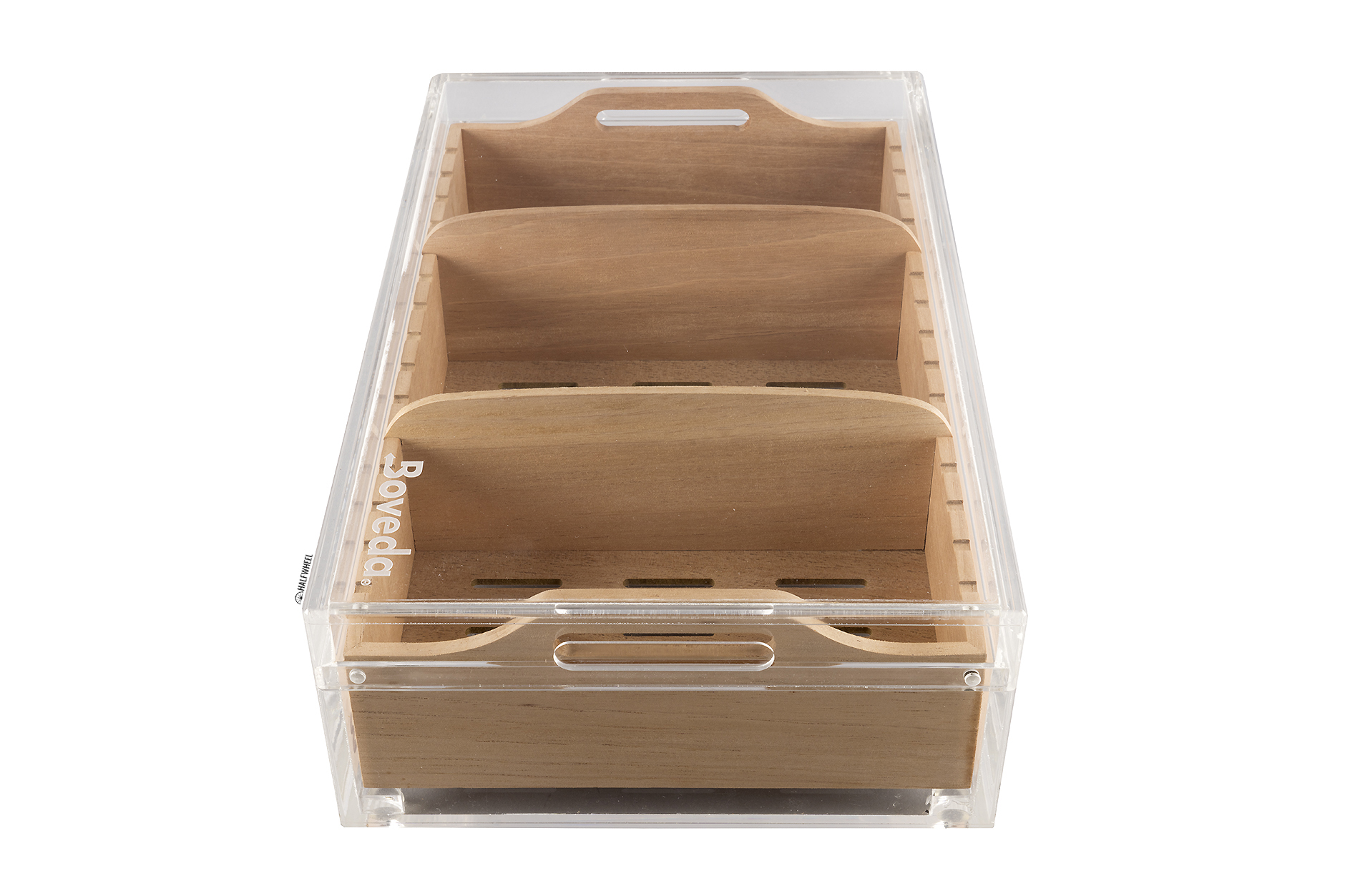 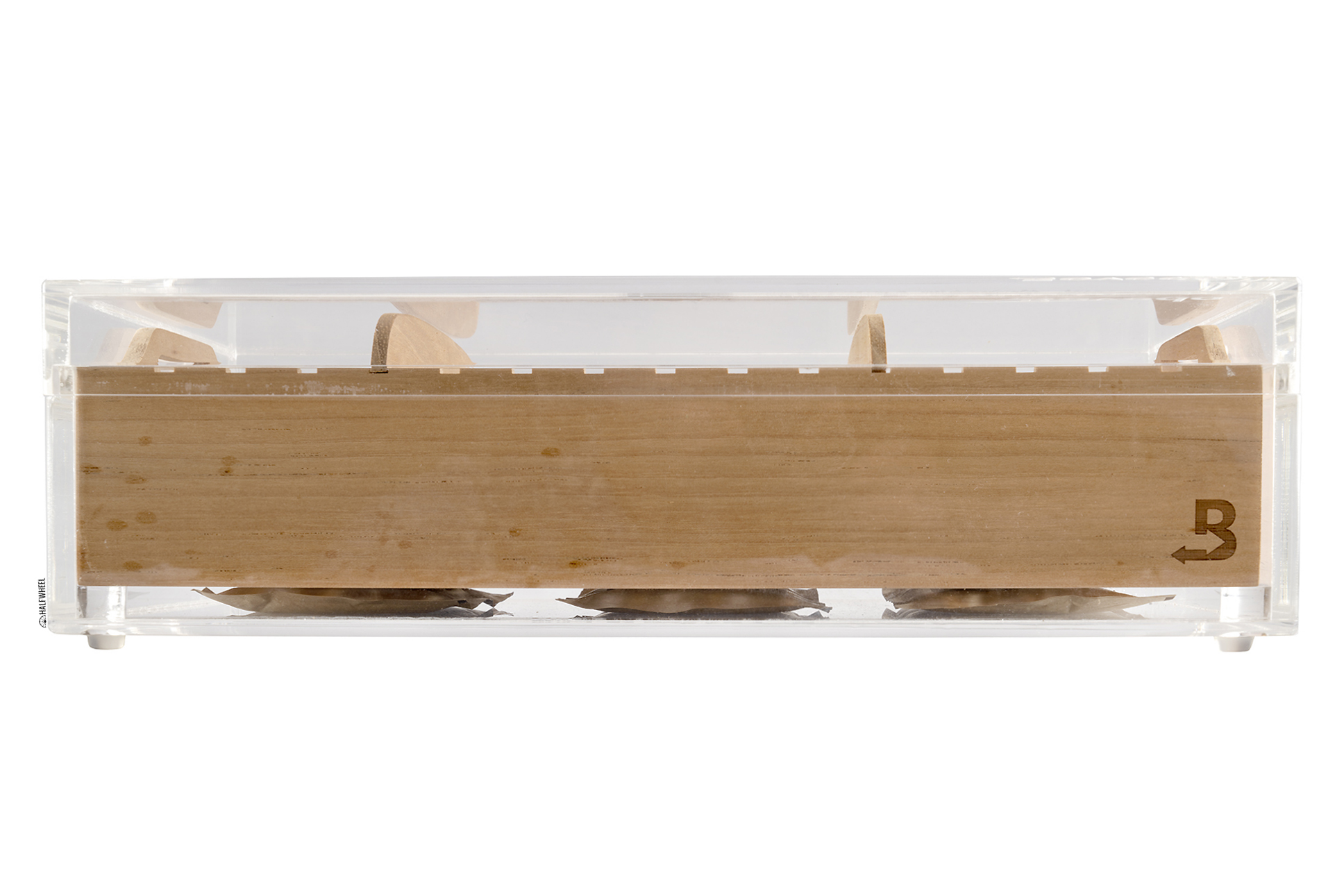 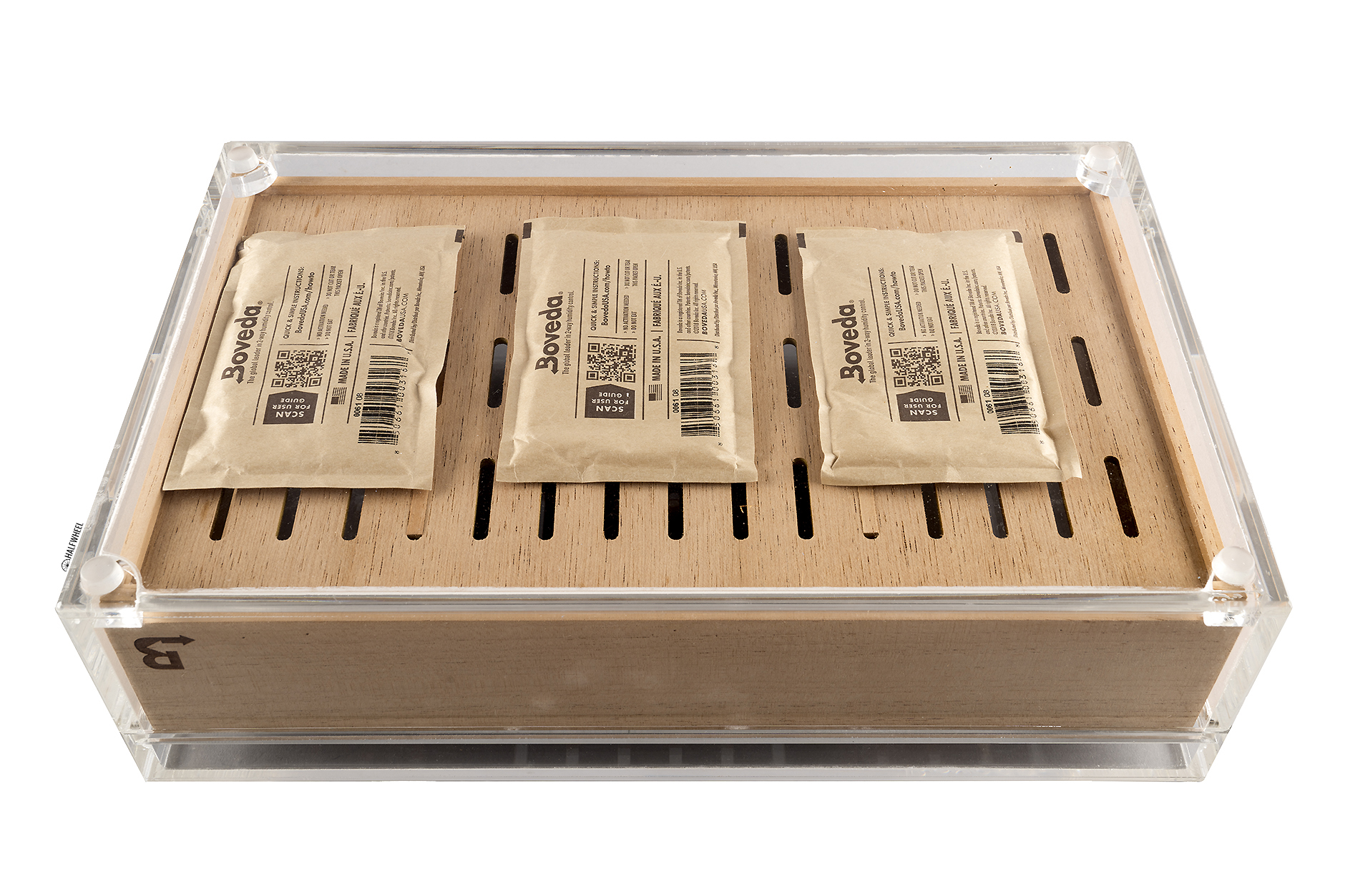 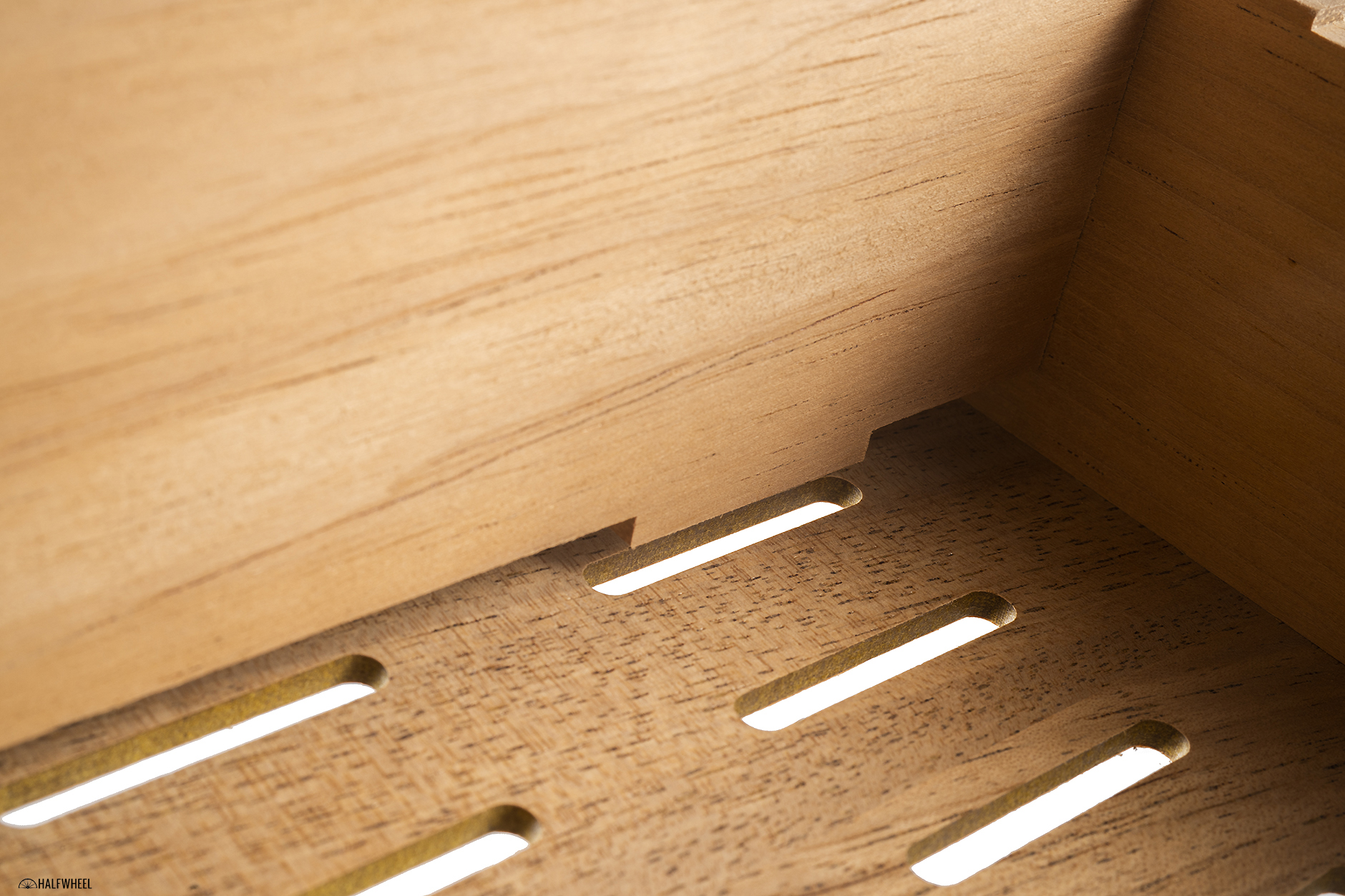 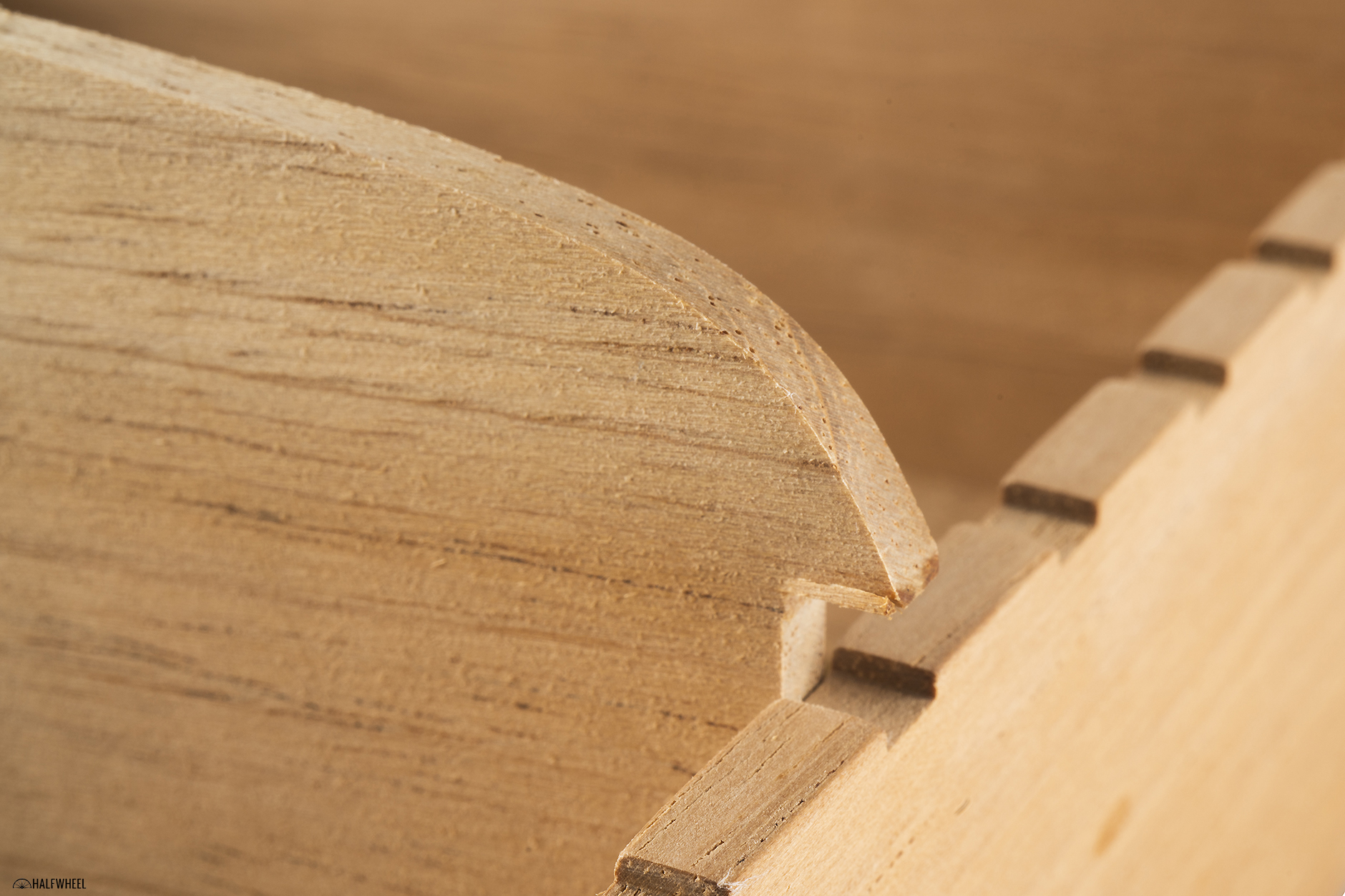 Before you read any further, you should really go back and read this review of the old model. I’ve committed to writing this review in a manner where you can understand this post without doing that, but it will make things a lot easier.

Boveda is a company best known for its eponymous humidity regulations packs, which are specifically targeted at humidifying cigars, marijuana or musical instruments, though they could be used for just about anything. Over the years, the company has introduced a few other associated products, including a series of humidors in 2015. Much like how Boveda packs didn’t look like a traditional cigar humidification device from the late 1990s, Boveda’s Acrylic Humidors don’t look like a humidor, especially the first series, which featured nothing but clear acrylic.

The concept is pretty simple, and it’s especially familiar if you know about terms like tupperdor or coolidor. Basically, given the advancements in humidification technology—cough, cough, products like Boveda—a humidor’s performance is largely based on how well it seals. Using wood—particularly wood that is designed to absorb moisture—is no longer necessary and has some obvious downsides, notably, it’s more difficult to maintain and can be quite finicky. Boveda decided to make a large plastic box—one that wouldn’t need to be seasoned—and one that would presumably have a massive advantage when it came to the seal.

It also looked radically different: it was all clear.

The original Acrylic Humidor was offered in two sizes: Small ($69.97) and Large ($197). Both had lids, which attach via small magnets in the corners, and the Large version featured a large tray with cut-outs to allow the humidity to travel from the packs below, while the Small version had a removable plate of sorts that served a similar purpose, albeit without being a tray.

Last year, Boveda announced that it would be updating the Acrylic Humidors with some changes. The most notable is that the tray is now made of cedar, dramatically altering the look of the humidor. Another change is that the lid is now flat, whereas the original model has a convex lid.

There are other minor changes: the new humidor is ever-so-slightly taller, the holes in the tray are larger, the handles cut-outs have been made larger, but it’s very similar with the exception of the cedar tray.

This is a unique humidor because I think using the tray actually means you can store more cigars than if you didn’t use the tray, which is the reverse of just about every other humidor I can think of. The tray takes up some space and means that you can’t put cigars against the floor of the humidor. However, the tray also adds about a half-inch of vertical height to the humidor. If you weren’t using the tray, cigars are likely to fall out of the sides of the humidor when opening and closing, so I’m guessing you are better off using it.

The tray measures 13.75 inches x 8.4375 x 3. That 348.05 cubic inches in volume equates to exactly 75 robusto cigars according to the Humidor Discount humidor calculator.

A lot easier than most humidors.

The company’s stance, as of August 2021, is: a. it is not recommended to season this humidor; b. if you are going to season it, the company says three 84 percent packs for 48 hours will make sure the wood is hydrated enough, but not over hydrated.

Regardless of whether or not you season the humidor, it’s pretty straightforward once you are ready to put cigars inside:

The tray has two removable dividers that can be moved laterally by pulling out the dividers and placing them within the slots on the bottom of the tray. There are also small cutouts along the front and back of the tray which also help to look in the dividers. If there isn’t a divider in the slots, those slots allow for the humidity to flow to and from the packets on the bottom.

From there, you just need to follow the normal Boveda humidity packet recommendations. I’d check on the packets every 90 days or so—in my experience, these packets are going to last more than double that amount of time—and you don’t want to mix different relative humidity levels. Beyond that, it’s a box to put cigars in. 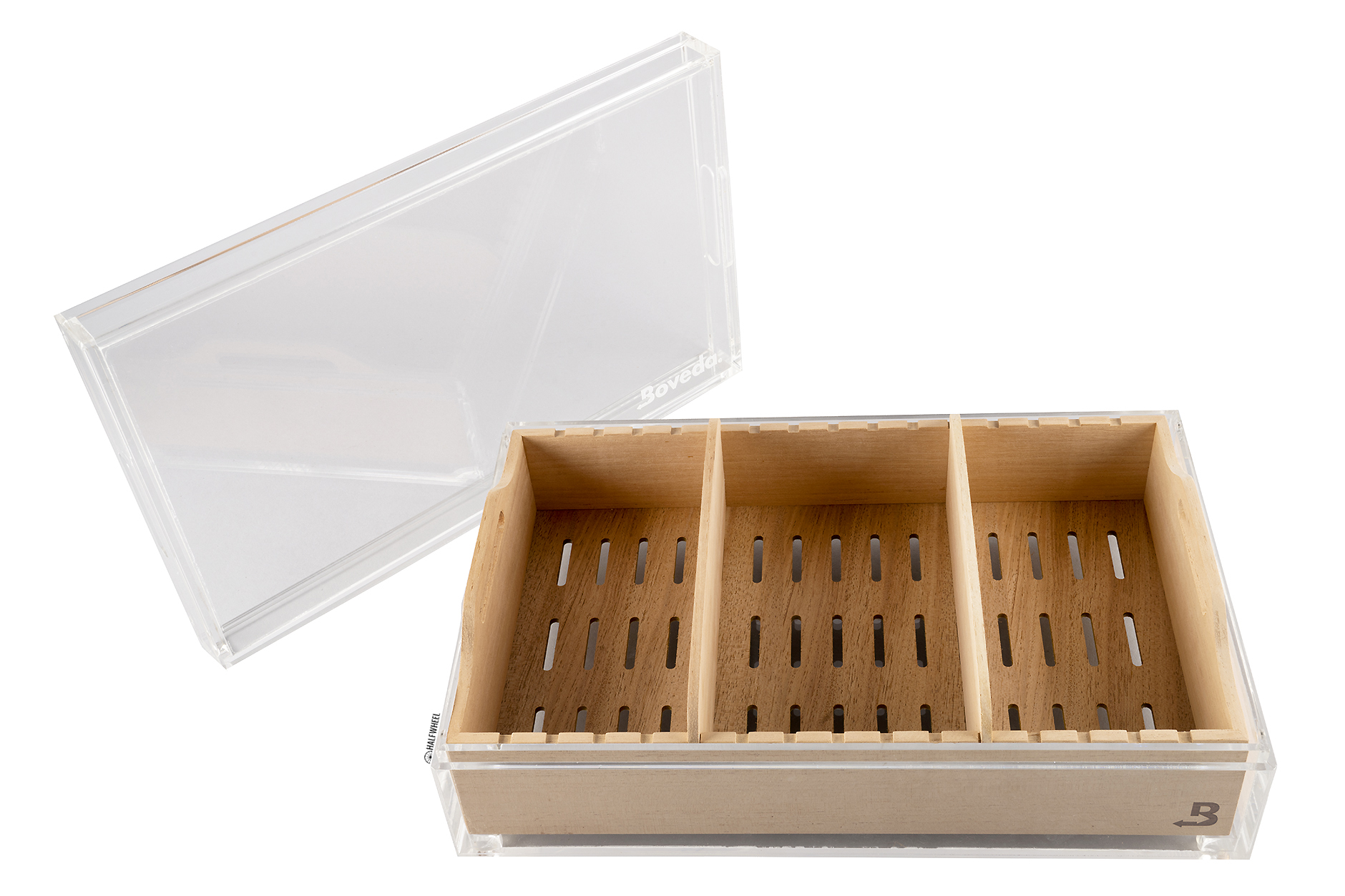 I can’t think of very many humidors that have a removable lid, but that’s how this works.

Here’s another fun fact: you can put the old acrylic tray in the new humidor shell. You can’t mix and match any of the other parts successfully, but the old tray will fit inside the old humidor and the lid will close. Because Boveda doesn’t sell the trays by themselves, I don’t know why that would be remotely useful, but I was curious about it. 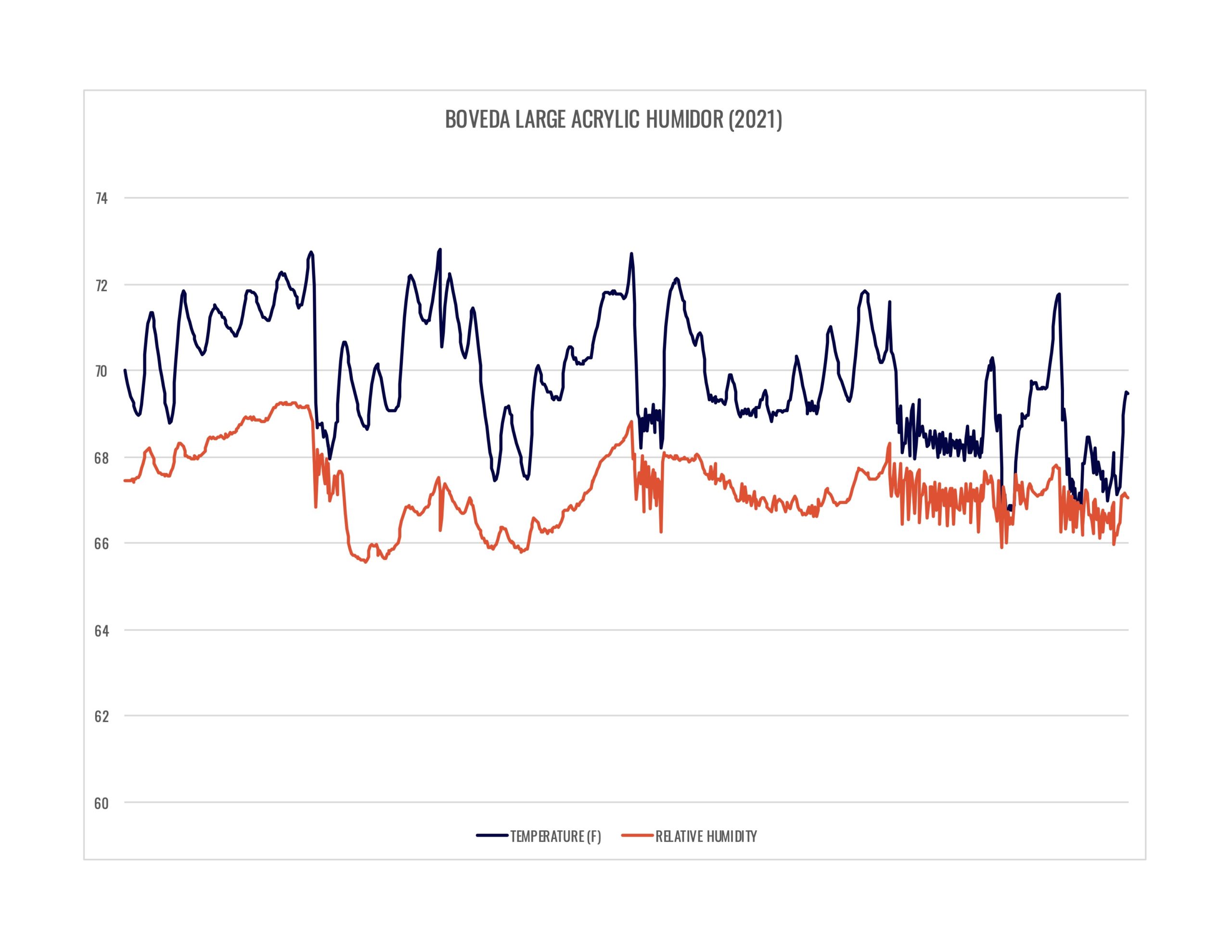 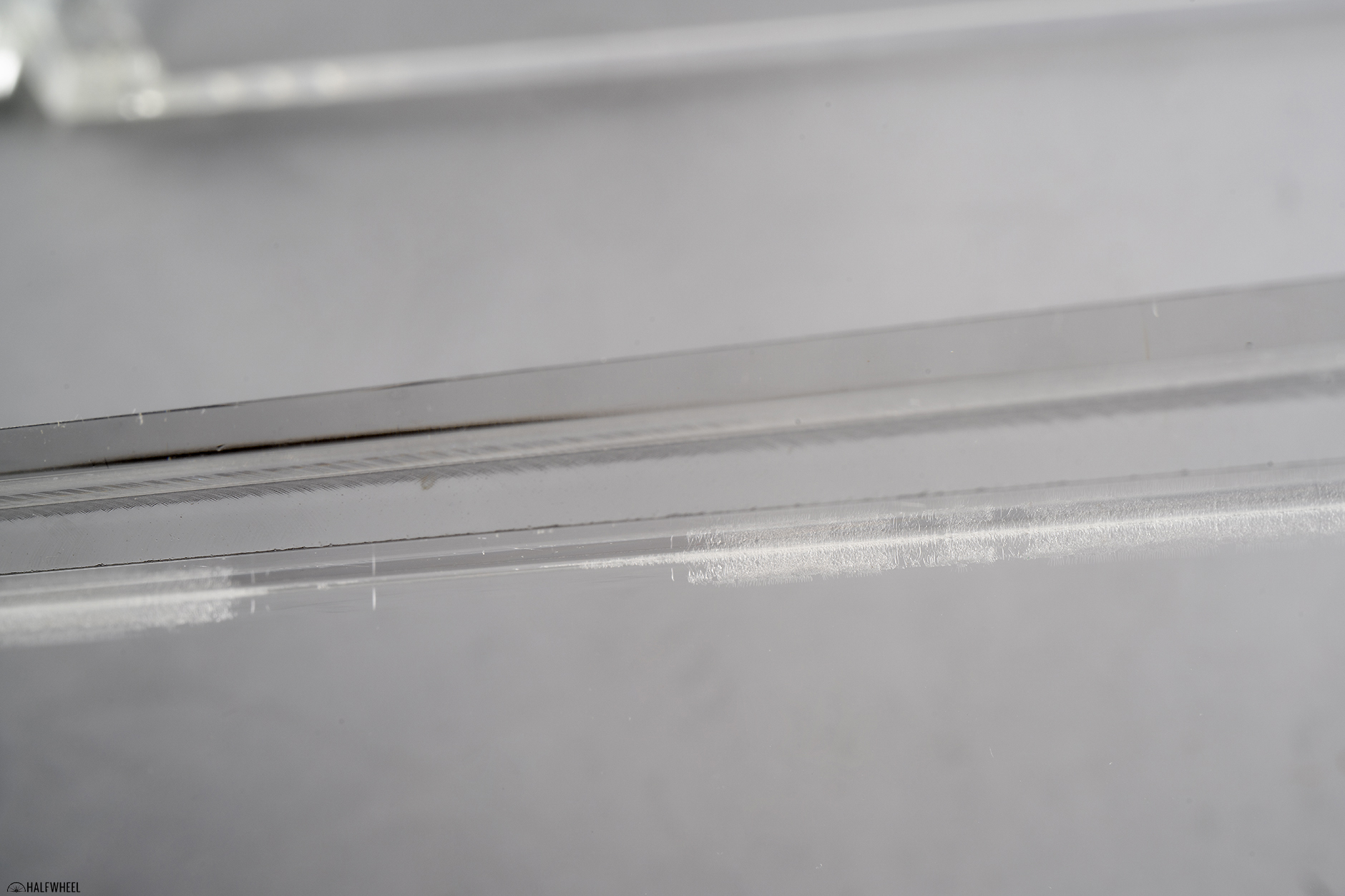 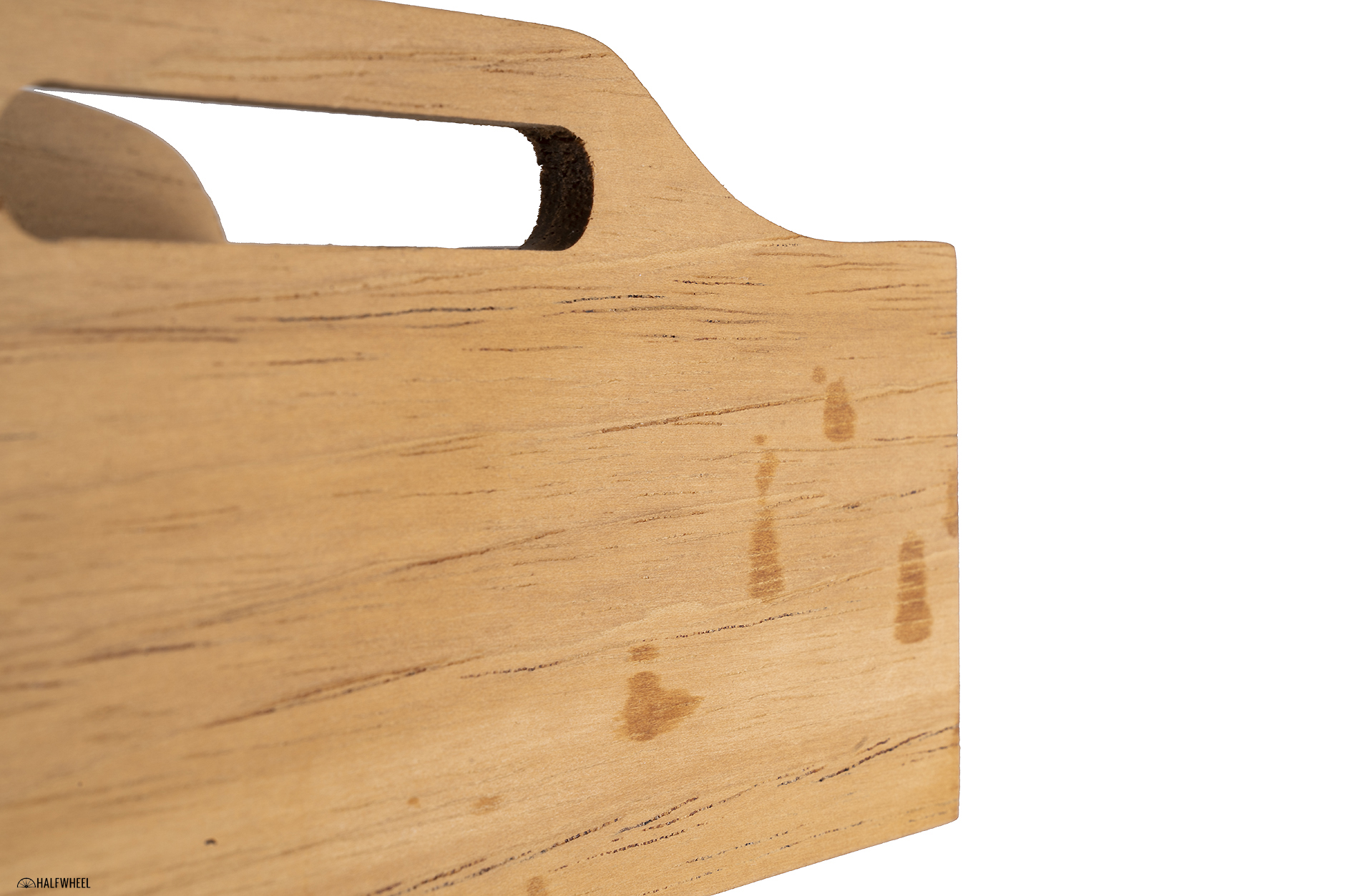 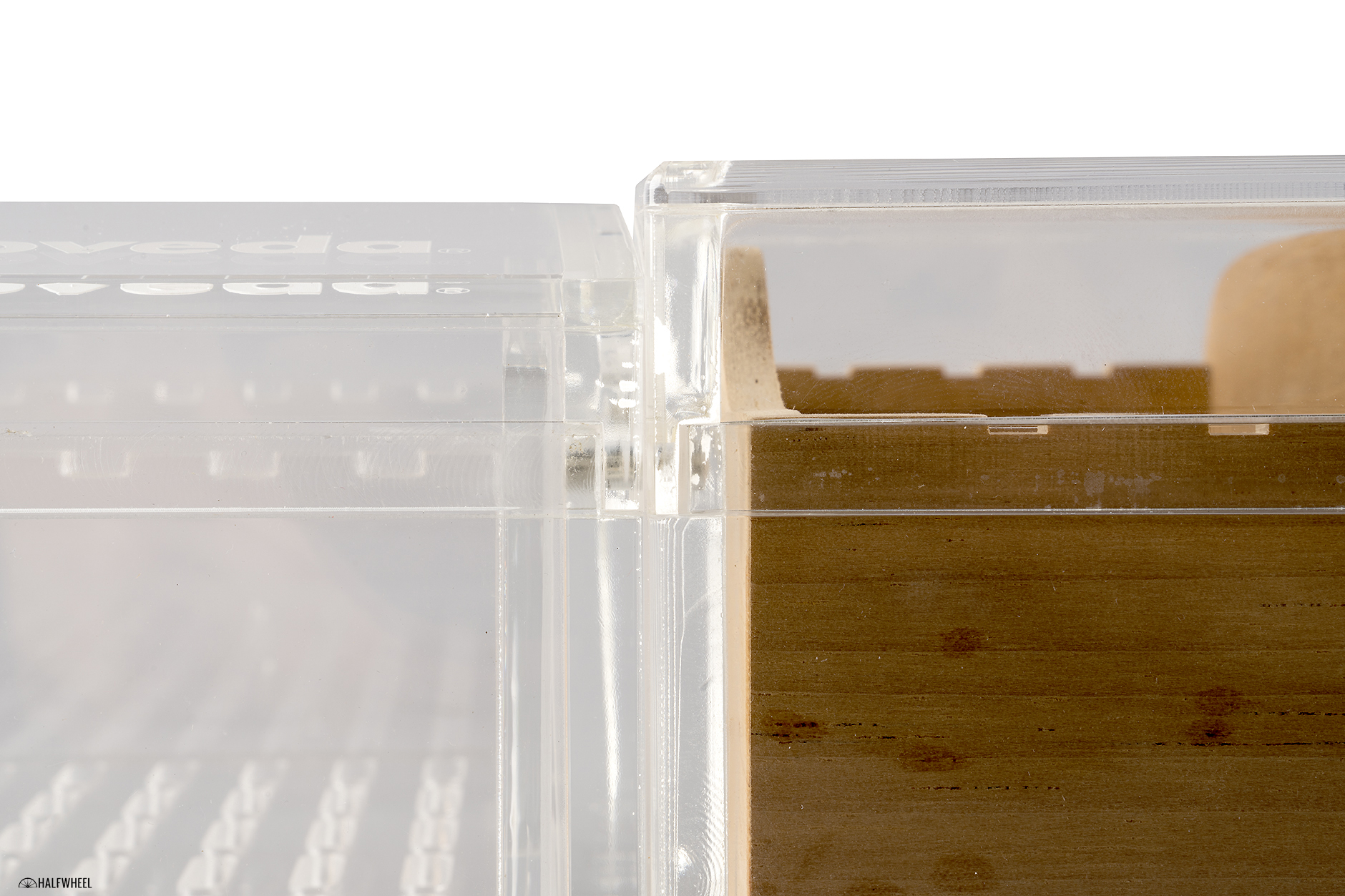 The most obvious competitor is the original Acrylic Humidor ($197) and I like that one better because of the aesthetics. If you can still find it, I would say your choice should just come down to looks and whether or not you want the cedar smell. Other than that, these two humidors are more or less the same. Over the years I’ve given out a lot of humidor recommendations and they generally have always mentioned three options: the Savoy Executive line of humidors, some sort of plastic bin, and a  hybrid solution, the original Boveda Acrylic Humidor. While I like the old one better than the new one, it’s not going to stop me from recommending this humidor. The beauty of the humidor is that it removes or minimizes so many of the problems most people have with their humidors: seasoning and/or maintenance. The reason why I recommended the old Acrylic Humidor so much was because I knew that I didn’t really have to worry about the person asking for the recommendation to mess up. While I don’t think the new Boveda Large Acrylic Humidor can be as foolproof as the original one, It’s about as close as you are going to get. There’s not a humidor at—or close to—this price point that is going to do a better job of keeping your cigars at your desired humidity. So long as you can live with the looks, I suspect anyone will be able to live with the performance, because it’s more or less the best you’re ever going to find. After all, it’s basically a fancy Tupperware container.

The humidor for this review was purchased by halfwheel. Boveda advertises on halfwheel.