No, you cannot have a box.

And that’s how my attempts at purchasing the Bolívar Tesoro went at Cigar World in Düsseldorf, Germany. Eventually, I was allowed to buy a handful of singles of the since sold-out Edición Regional and thus, today’s review.

The Tesoro is the latest German regional, the 13th by my count and the second one to wear a secondary band that reads 5ta Avenida, the Spanish translation of the German distributor, as opposed to Alemania, the Spanish word for Germany. Here’s our weekly refresher on Edición Regionals. Bonus points if you can spot the new line:

In 2005, Habanos S.A. introduced a new series of limited production releases that would eventually become to be known as Edición Regional (Regional Edition). The program took regular Habanos S.A. brands and gave their regional distributors special sizes that aren’t part of respective brands regular production line-up. In some cases, like the Bolivar Gold Medals, Habanos S.A. gave specific distributors sizes that had been discontinued, but most are sizes that have never been available prior. There are cases of multiple distributors getting the same cigar, but there must be at least two years between the first and second release. There’s one major exception to the rule and that would be perhaps the most famous ER, the Edmundo Dantés El Conde 109, which is an ER available for Mexico that is related to the Montecristo brand, but is largely its own brand. Every six months or so, Brooks Whittington will go through a kick where he pays special attention to how much a cigar weighs. It’s not something I pay much attention to or mention regularly, but the Bolívar Tesoro feels noticeably light for its size. This is a big cigar that would be beyond my comfort level in parejo format, but in perfecto size, I look forward to smoking it. There’s not much off the wrapper aroma-wise, but one cigar is stronger than the others with leather, some ammonia and touches of vanilla ice cream. I forgo the process of sticking the end of the perfecto up my nose like a four-year-old, but I do get a much stronger floral flavor with some butterscotch ice cream. One sample, the same one that had a stronger wrapper aroma, was noticeably different with some woody flavors and Welch’s grape soda. The cold draws are largely similar: floral, some creaminess, a sweet creamy orange, lime and some sawdust. Two of my cigars had some slight cracks at the top of the cap due to transport, so I had to make slightly more aggressive cuts than normal, but even with that, the draw is extremely tight.

As is expected, there’s not a ton of smoke coming to the mouth once lit. I’m sure if I engulfed the entire bottom of the cigar, or cut it off, things would be different, but the small entrance way at the bottom doesn’t provide much room for air. The initial flavors are cedar, cream, pistachio and coffee. One sample has some weird diesel aroma and another has an extremely sharp pepper in the back of the mouth. Fortunately, both of those irritations are short-lived and despite all the differences up until this point, the cigars seemingly come together into a universal profile. The Tesoro has sweet cedar and oak on top of spearmint, caramel candy and white pepper. It’s medium-full to full in flavor and medium-full everywhere else. There’s no denying the cigar shows signs of youth, but the flavors are smooth and detailed enough. Outside of a tight draw on one sample, construction is awesome and at least on the two normal-drawing cigars, it’s burning a bit quicker than I would have expected. The cedar base remains and really shows no signs of letting up. It’s intertwined with a sweetness that reminds me of buttermilk more than anything else, not acute, but ever-present. Behind that is potato chips, pistachio, a generic citrus and a pepper that reminds me of a lemon pepper. I’m not sure how much the latter is because of the aforementioned citrus, but it’s definitely softer than where the pepper was in early parts of the Tesoro. Strength picks up a bit to medium-full, perhaps even hitting full, but starts to recede right before the final third. Two samples need touch-ups to help with the burn, which I suspect on one cigar has more to do with the draw. 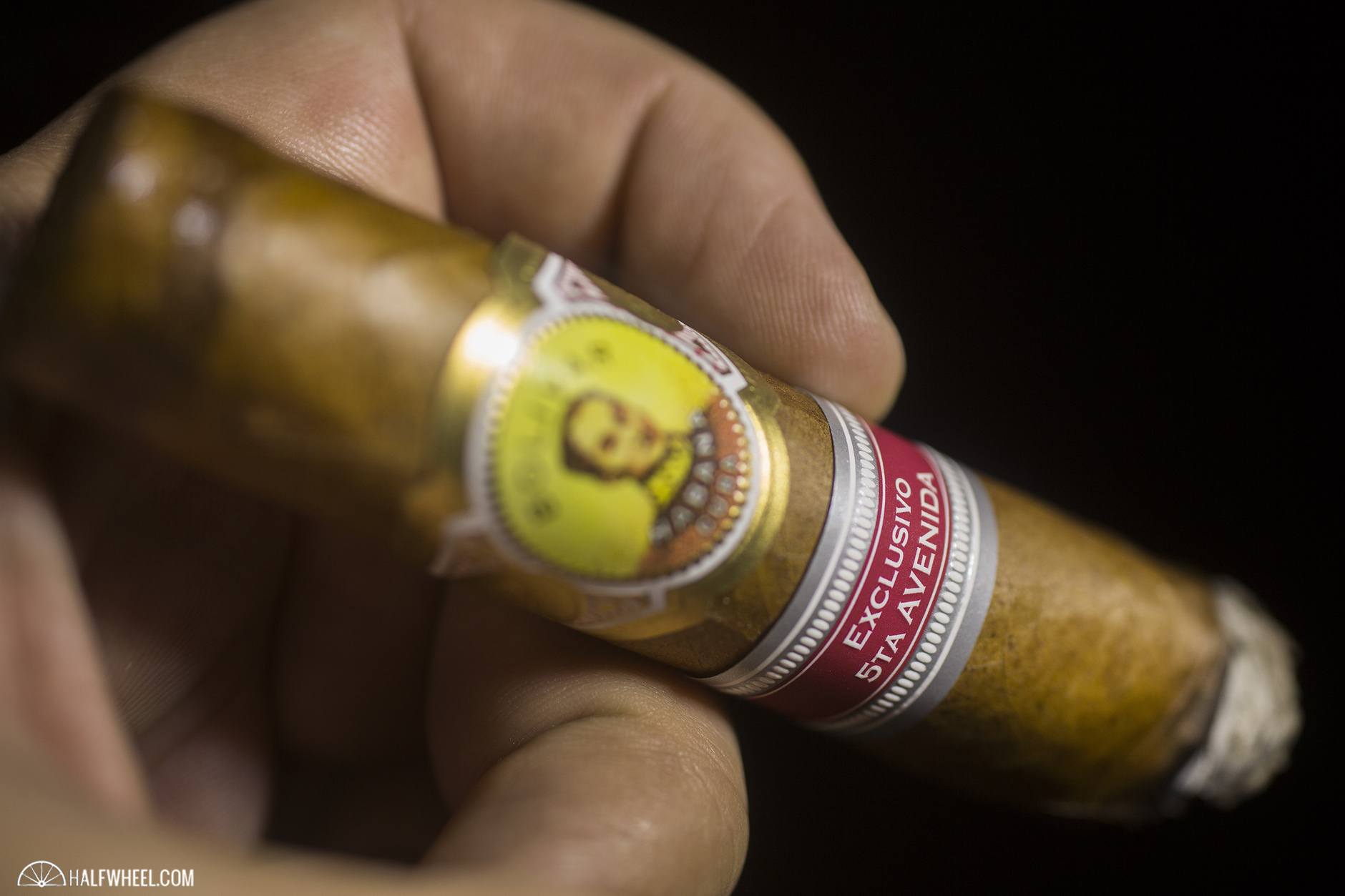 Flavor-wise, the Bolívar Tesoro definitely lightens up, which is a welcome change. The cedar finally gives way, replaced by some charcoal tastiness and peanuts. Behind that is orange peel, espresso and black pepper. For the first time in the cigar, there’s a really distinct finish: burnt popcorn and black pepper. While flavor and strength are both medium-full, the body actually picks up to full. Construction is similar to the second third in just about every regard: a couple touch-ups and one cigar with a bad draw. The Bolívar Tesoro is a good cigar. It wasn’t until I finished smoking my last sample that I realized that I thought about comparing it to the Armonía. I then realized it was identical, at least dimensions-wise. I smoked that cigar over seven years after it was released, whereas the Tesoro is obviously much fresher. The differences are stark, albeit predictable. The Tesoro is much more vibrant, much bolder and at least comparing the two experiences, much better. Flavor-wise, this is one of the better regionals I’ve smoked in quite some time. Construction-wise, it wasn't flawless and our scoring system punishes it, but I'd gladly buy more of these and smoke them now.