While there have been a number of different cigars released under Habanos S.A.’s  Edición Regional program that have been the same size, it is not very often that the same marca has two different releases with the same name.

That was the case earlier this year when the Cuban cigar company shipped the Bolívar Short Bolívar, a 4 x 50 petit robusto packaged in boxes of 20 produced for the country of Andorra, which is a tiny country located between France and Spain. This was the second time the Short Bolívar name was used, after Habanos S.A. released the original Bolívar Short Bolívar in 2008 for the Asia Pacific region.

In fact, other than the marca and the name, there are very few similarities between the two releases, as the original incarnation measured 4 1/3 x 52 and was sold in boxes of 25. In addition, while the first version of the Short Bolívar had a total production of 7,400 boxes, the newest release was limited to less than half of that, with only 3,000 boxes produced.

The program, which launched in 2005, brings brands in unique sizes to specific countries or regions, by way of the area’s distributor guaranteeing a purchase of at least 25,000 cigars, and since 2012, being limited to one Edición Regional release per year. The other requirement is that the size must appear elsewhere in the Habanos S.A. portfolio but not in the regular production of a particular marca, with a very small handful of releases being cigars that had previously been in the brand’s portfolio but since retired.

Although the newest version of the Short Bolívar was slated as a 2017 release, it did not start shipping to retailers until earlier this year. According to Les 1000 Pipes, a retailer in Andorra, pricing is set at €175 per box, which converts to approximately $10.60 per cigar. Visually, the Bolívar Short Bolívar is covered in a gorgeous milk chocolate wrapper with a very obvious reddish tint that is fairly smooth to the touch. Although the cap seems to have been extremely sloppily applied, the cigar has a bit of give when squeezed and there is very little oil present. Aroma from the wrapper is a combination of sweet cedar, leather, manure, barnyard, hay, coffee and a bit of bitterness that I can’t place, while the cold draw brings favors of leather, more of the sweet oak from the aroma, a slight spice on my tongue, white pepper, grass and a very unpleasant note that reminds me instantly of plastic.

Starting out, the Bolívar Short Bolívar exhibits a profile that is a bit generic, with cedar and nuts leading the way, followed by and leather, barnyard, coffee, dark chocolate and tree bark. There is a surprising amount of spice on my tongue as well as a bit of black pepper on the retrohale, but the biggest issue is a very noticeable burning plastic bitterness that on finish that not only screws up the overall balance, but also overwhelms the other flavors at certain points, especially in the first 10 puffs or so. Construction-wise, the draw is a bit looser than I would like after a simple straight cut, while the burn is problematic out of the gate and I am forced to touch it up a couple of times to keep it from getting out of hand. The strength is virtually nonexistent through the first third, ending up slightly higher than mild. 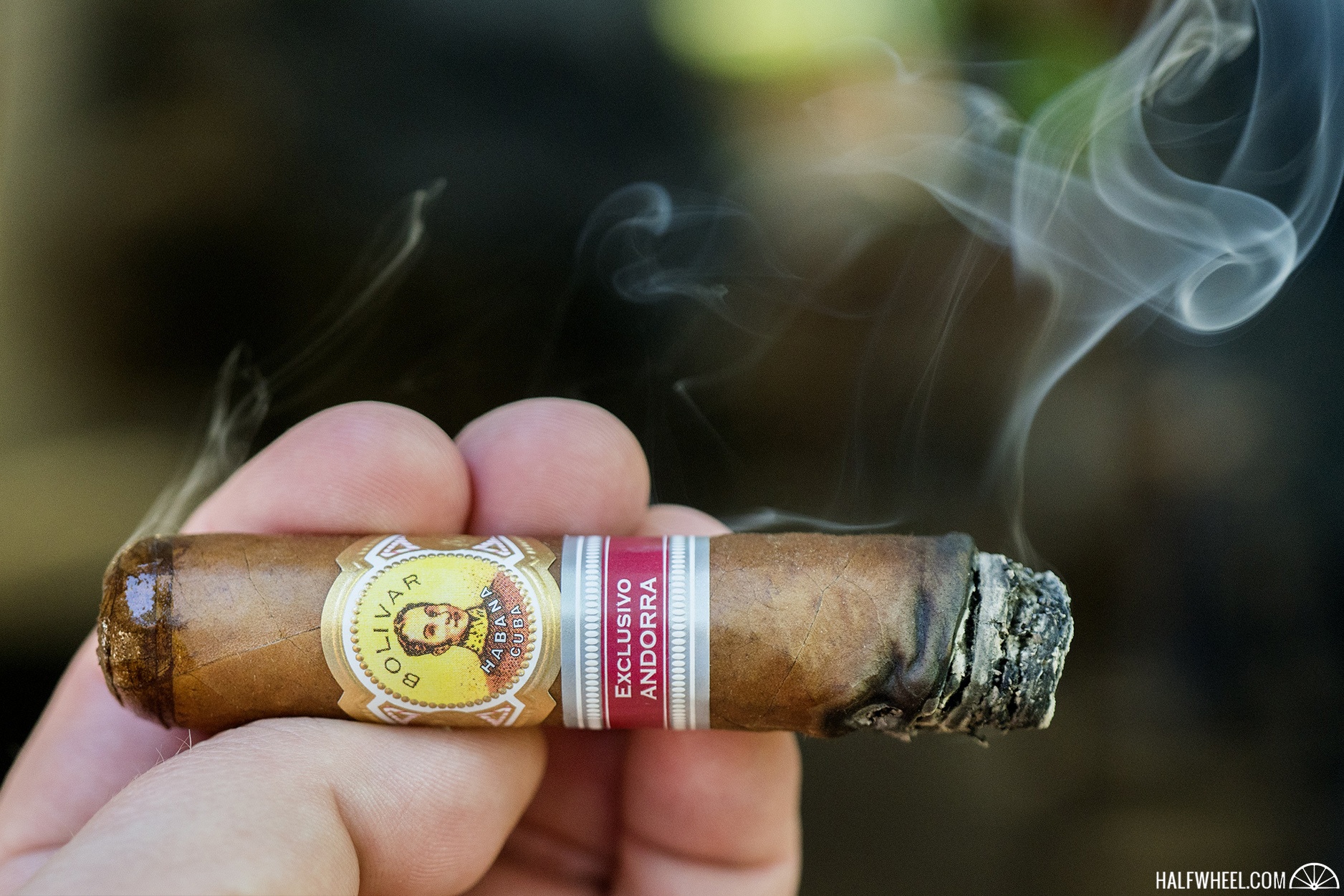 As the second third begins, the burning plastic flavor on the retrohale of the Bolívar Short Bolívar recedes a bit, allowing more of the flavors in the profile to become noticeable, including the same cedar and nuts dominant with other notes of leather, coffee beans, citrus and bread flitting in and out. Unfortunately, the vanilla sweetness from the cold draw is just a memory by the time I hit the halfway point, while both the black pepper on the retrohale and the spice on my tongue have remained at fairly constant levels. The draw is still a bit loose, but the burn has evened up nicely, although I still have to touch it up once. Strength-wise, the Bolívar has bumped up a bit, hitting a point about halfway between mild and medium as the second third comes to an end. Interestingly, the final third is where the profile of the Bolívar Short Bolívar starts to become enjoyable, as the burning plastic flavor that was so invasive in the first and second thirds has all but disappeared, leaving behind a more complex profile of cinnamon, dark cocoa nibs, freshly roasted coffee, hay, sweet cedar and orange citrus. In addition, the vanilla sweetness is back and combines nicely with the black pepper and spice on my tongue that is considerably less than the first two thirds. The draw remains a touch loose, but unlike the preceding two thirds the burn is virtually flawless and the smoke production is dense off of the foot. The overall strength does increase a bit from the second third, but still falls well short of the medium mark by the time I put the nub down with less than an inch to go. It is not very often that I am totally perplexed by a cigar, but from virtually the first puff, the Bolívar Short Bolívar showed that it can still happen. The profile is full of off flavors-including a pervasive burnt plastic note that actually managed to taste worse than it sounds as well as a harsh spice on the tongue that is shocking in such a small vitola. While the last sample I smoked was slightly better, even with that this is a release you want to stay far, far away from for the foreseeable future. If there was more citrus, more sweetness or a more balanced profile, the Short Bolívar might have been saved; unfortunately, that is just not the case, at least at this point in its life.