There are certainly countries and regions that readily come to mind when thinking about Habanos S.A.’s Edición Regional program; Great Britain and the United Kingdom, the Asia Pacific region, Spain, France, Switzerland—all frequent recipients of cigars in the program. But there are also a number of other countries and regions who have only received just a handful of releases, one of which is Greece and Cyprus.

The two-country area received its first Edición Regional back in 2009, the Bolívar Greco, a 5 3/5 x 50 robusto extra vitola known as the gorditos. It’s a size that has been used for several Edición Limitadas, including 2010’s Partagás Serie D Especial, 2007’s Romeo y Julieta Escudos and 2004’s Hoyo de Monterrey Epicure Especial. The Romeo y Julieta Cedros de Luxe, a regular production cigar released in 2014 shares the size as well, as do a number of other Edición Regional releases.

As has been covered previously, the Edición Regional program allows distributors to request a certain size be made in one of the non-global brands of Habanos S.A.’s portfolio be made for a region that they cover. The size must not exist in the marca’s existing portfolio, though it can have been a discontinued size. In this case, the distributor Phoenicia Trading Co. A.A. had 1,600 boxes of 25 cigars produced, a total of 40,000 cigars.

If the name Phoenicia Trading Co. A.A. sounds familiar, it should be for good reason as the company runs two operations, a European division that covers Greece, Malta, Turkey, Ukraine and Cyprus; and a second that spans Africa and the Middle East, including Lebanon, Saudi Arabia, United Arab Emirates and literally dozens of other countries. Other than the secondary band, there is nothing about the Bolívar Greco that would suggest it to be something outside of the marca’s regular portfolio, though most fans of the brand would notice it’s not a regular size. The cigar is generally rolled well—a few soft spots are found on the first while the second and third are quite firm—and each is finished with the traditional triple cap. The well-tanned, attractive wrapper leaf has just a faint red hue to it and the usual Cuban look when it comes to the veins and occasional water mark, though thankfully I don’t see a single green spot among the three samples. The foot presents a surprisingly sweet profile that is almost floral, with bright apple and  orange, with suggestions of potpourri and bubblegum in individual samples. The cold draw is very good, firm if anything and delivers a woody top note that is backed by sarsaparilla and some faint, generic baking spices.

Before I can take my first puff, little pockets of white tooth appear near the foot of the cigar as I toast it, which I’m a bit surprised by as the wrapper didn’t show much, if any. The flavor starts off at a medium-plus level of intensity, tempered with pepper but not shy in tangy wood and sour chalk, with the baking spices picking up in intensity as well. It’s not the smoothest introduction to a cigar that I’ve had and leaves me a bit concerned for what the rest will taste like. Black pepper quickly becomes the lead in the nose, offering a decent tingle that stands out from a somewhat thin body of smoke, and eventually becoming the focal point of this section. The aroma contributes to the attempt at complexity with some smoky, grilled meats, though it’s not something I pick up via a retrohale save for as a parting note. The ash does an incredible job holding on through the first third, while the cigar has burned quite well, particularly in regards to the burn line. Pepper drives the cigar’s strength and this tastes like one of the fuller Bolívars I have had in some time. While I can’t say that the Bolívar Greco is offering much in the way of twists and turns at the start of the second third, I also can’t say that I’m not enjoying what it is offering, at least at a macro level. Pepper continues to drive the cigar, and while it still feels out of balance with the rest of the cigar and can get a bit rough, it’s still pretty enjoyable. Chalk moves in and out as well, adding flavor but not always for a positive result. I notice the aroma beginning to evolve just past the midpoint as a bit of pungent and sweet barnyard wafts through the air, while the flavor shift a bit just before it’s time for the bands to come off as the pepper backs off a bit and a bit of rock enters. As much as I hate to think this cigar is still a bit youthful, it’s becoming increasingly obvious, though there are signs that it is doing a good job shedding its rougher spots. 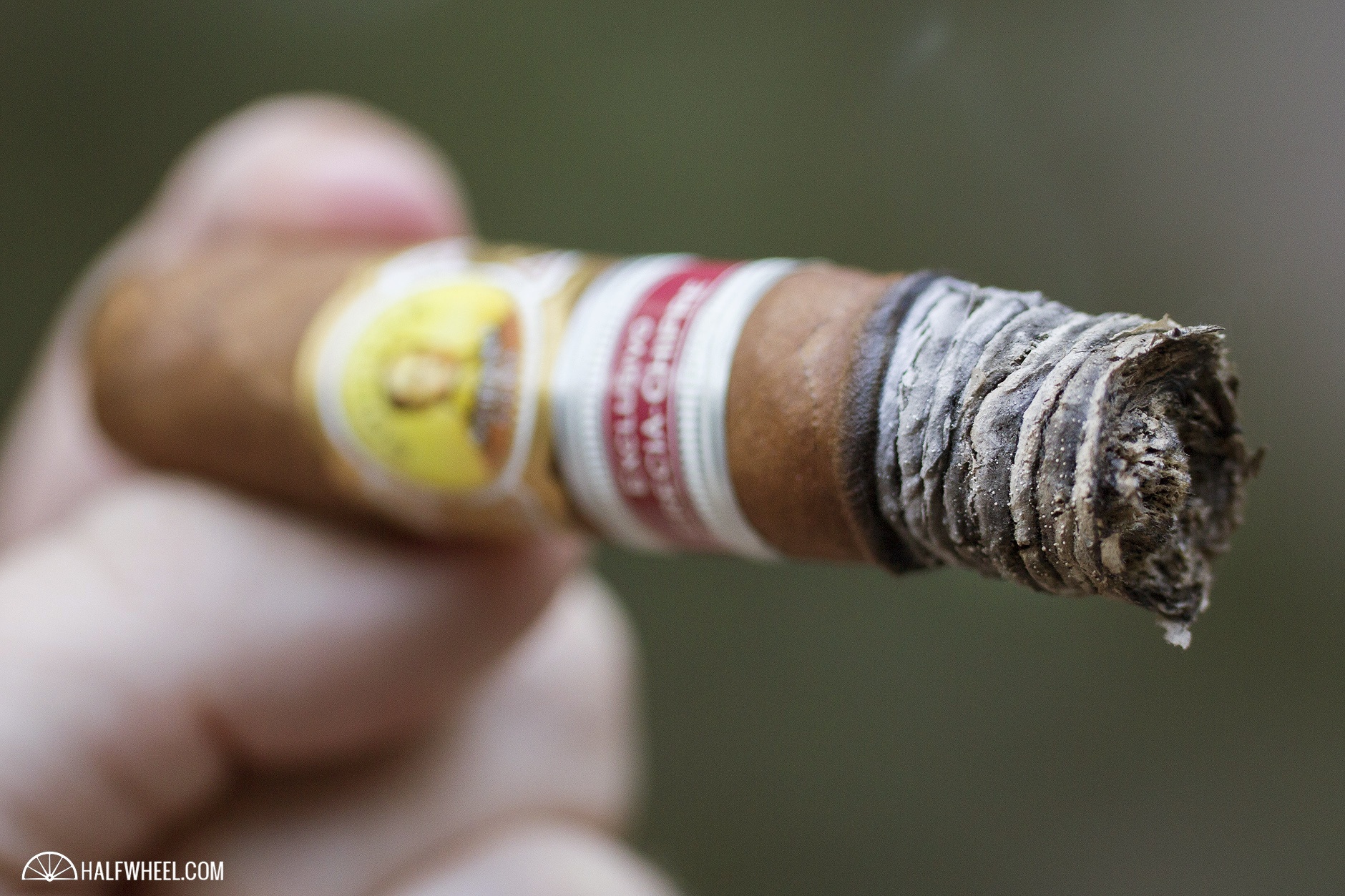 While the start of the final third still has a good amount of pepper, I get my first sense of complexity from the Bolívar Greco, as it has a doughy undertone that is lush and chewy, while mixed nuts, rocks and red chili flakes mingle on top of that. The latter is the most fleeting, darting in and out of the flavor for much of this portion and its place giving room for some sweetness to emerge, a note along the lines of sweet cake donuts. The aroma begins to dabble in warm, sweet cedar and maple, and the cigar quickly hits a new plateau of complexity and enjoyability. While the flavor can get a touch hot, it’s easy to keep cool with some measured puffs and the result is rewarding as an oatmeal base note emerges, with pepper and cedar complementing it. The burn line begins to go awry in the final two inches, shoveling quite signfifcantly an unfortunate turn given how well it has performed to this point. Additionally, the final third burns the slowest of the three sections by far, and it can be a bit laborious to smoke the cigar down to a nub. I didn't bother to check the year of this cigar's release prior to smoking the first two samples and when I finally looked about halfway into the third, I was surprised to see just how old this cigar is. While I certainly wasn't ready to chalk its prominent pepper up to youthfulness, I certainly thought it would have been a much more recent release based on the profile. As I noted above, the Bolívar Greco has some fantastic moments where it shows complexity, richness and lush character, though they are still in the minority of puffs. Make no mistake about it, however: the promise of this cigar to continue to favorably evolve is certainly made.