If you’re a fan of thinking “haven’t I heard that somewhere before?” then this review might be just up your alley.

As you’re likely aware, Habanos S.A. creates cigars for certain regions of the world under the header of the Edición Regional program. The project is underwritten by the distributor of the region, who chooses one of the non “big six” marcas—Cohiba, H. Upmann, Hoyo de Monterrey, Montecristo, Partagás and Romeo y Julieta—as well as a vitola that exists in the Habanos portfolio but not within that of the chosen marca. A minimum of 25,000 cigars need to be produced and the releases generally only last for a year, though with enough demand can be brought back for a second year. Regions are limited to just one release per year, and a request for a regional is not guaranteed to be granted.

In 2010, Phoenicia Trading A.A., which covers an extensive list of countries throughout the Middle East and Africa, selected the Bolívar marca and the Sublimes vitola, a 6 1/2 x 54 double robusto for a release called the Bolívar Emiratos. It was a decent sized release, with 30,000 cigars produced and split into 3,000 boxes of 10 cigars.

While the region wouldn’t get another ER release for some five years, it would eventually come with a familiar marca and name.

For its 2015 request, Phoenicia proposed another Bolívar, but this time called it Emarati and made in the Edmundo vitola, a well-known size made famous by the Montecristo marca but also found throughout the Edición Regional program, with ten different instances being used in the program so far. The production number also went up, with 2,000 boxes of 25 cigars being made, a total run of 50,000 cigars.

For those not familiar with the Bolívar marca, it traces its history back to the early years of the 1900s, generally considered to be established by José F. Rocha either in 1901 or 1902, and was named for the South American revolutionary, Simón Bolívar. Bolívar hailed from what is now Venezuela and is known for helping establish that country as well as Bolivia, Colombia, Ecuador, Peru and Panama as sovereign states outside of Spanish rule.

After Rocha’s death, the brand as well as his company, J.F. Rocha y Cia. was purchased by  Cifuentes y Cia, gaining a following around the world. Up until recent years, it has generally been considered one of the more full-bodied marcas in the Habanos S.A. portfolio, a distinction that some might argue has tapered off in recent years. 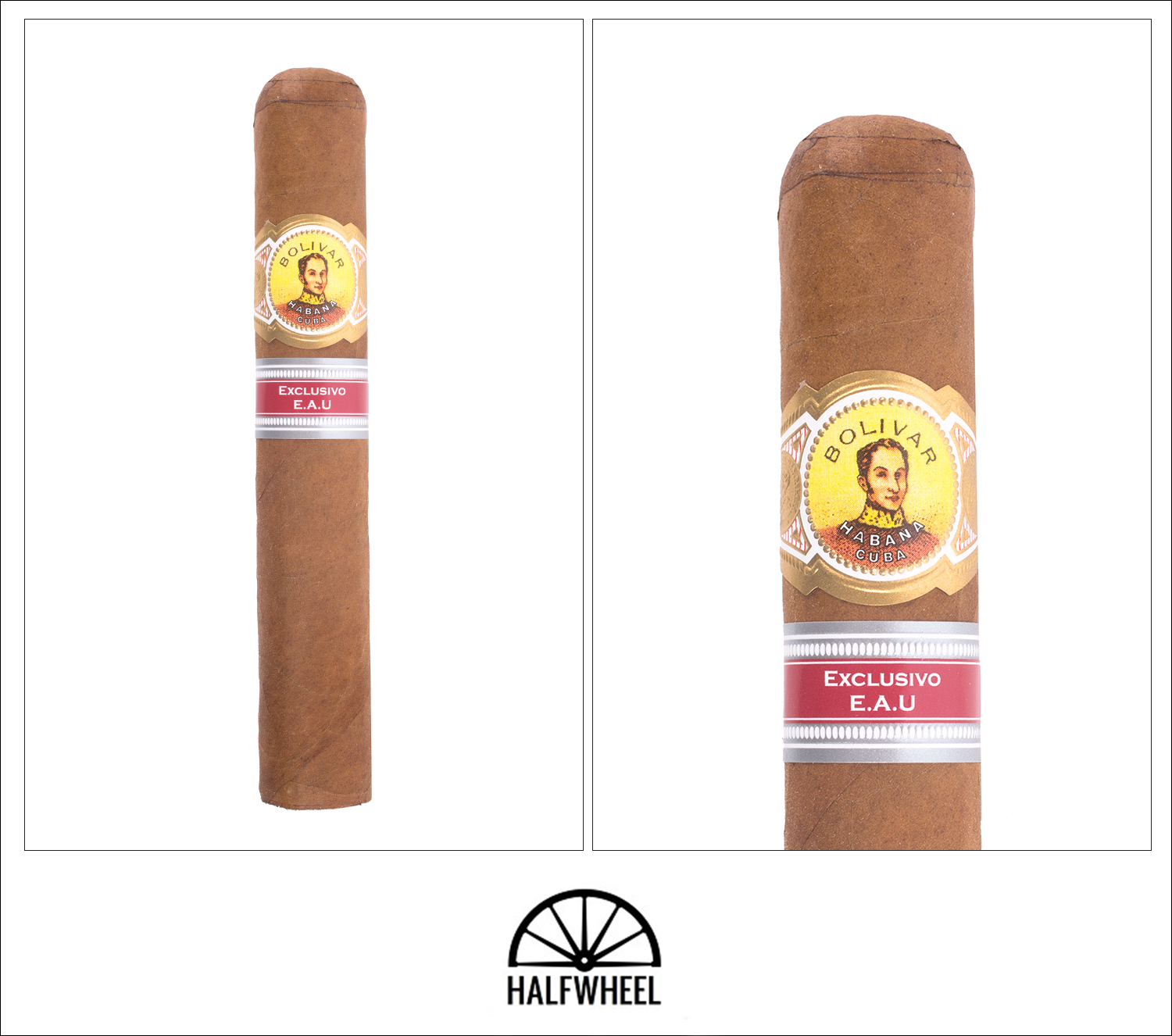 For a “special release,” the Bolivar Emarati feels immediately familiar, as its Edmundo vitola is shared with the well known Montecristo size bearing the same name, a robusto vitola that fits well within the range made under that name both on and off the island. The caramel colored wrapper is a bit on the dry side and lacks real prominent veins, though a few are visible and show their instantly recognizable structure. It’s one the firmer Cuban cigars I can remember smoking recently, showing a uniform unwillingness to give much when squeezed. From the foot I get a fairly light aroma that suggests a bit of jelly—white grape in one, orange in another—on lightly toasted white bread, though the smell is a bit deeper if not instantly identifiable. The draw is on the firm side and starts with a bit of olive oil and crusty bread, again with a slightly thicker if not immediately recognizable background texture that is a touch vegetal at times.

Out of the chute, the Bolivar Emarati leads with a neutral profile of warm nuts, dry lumber and a touch of pepper that is detectable on the palate but felt by the nose, with a bit of funky sourness on the finish. The wrapper begins to show its fragility early on, as the cut seems to have created a few cracks towards the head, which I hope don’t become problematic as the cigar progresses. The first inch of puffs are marked by a back-and-forth between the subtle pepper and the hint of sourness; neither is terribly strong, and the cigar doesn’t offer much of a kick or lasting finish. Heading out of that first inch, a bit of chalk comes into the mix and pushes out the sourness as the pepper gets a bit fuller but not much more powerful on the palate and in the nose. While the first two samples avoid sweetness or creaminess, the third offers a bit of warm, melted French vanilla ice cream at the one inch mark as the ash continues to adhere to the cigar. The sweet, creamy flavor is a huge plus to the flavor, not overpowering but providing a pleasing accent. The burn rate is a bit quicker than I would have anticipated, though the secondary band seems to play a bit of a trick on the eyes in regards to how much cigar is actually left as the dark gray and almost liver colored ash begins to threaten the Exclusivo E.A.U. band. There aren’t many more changes in the first third, as the Emarati has stuck to a steady path since its outset. 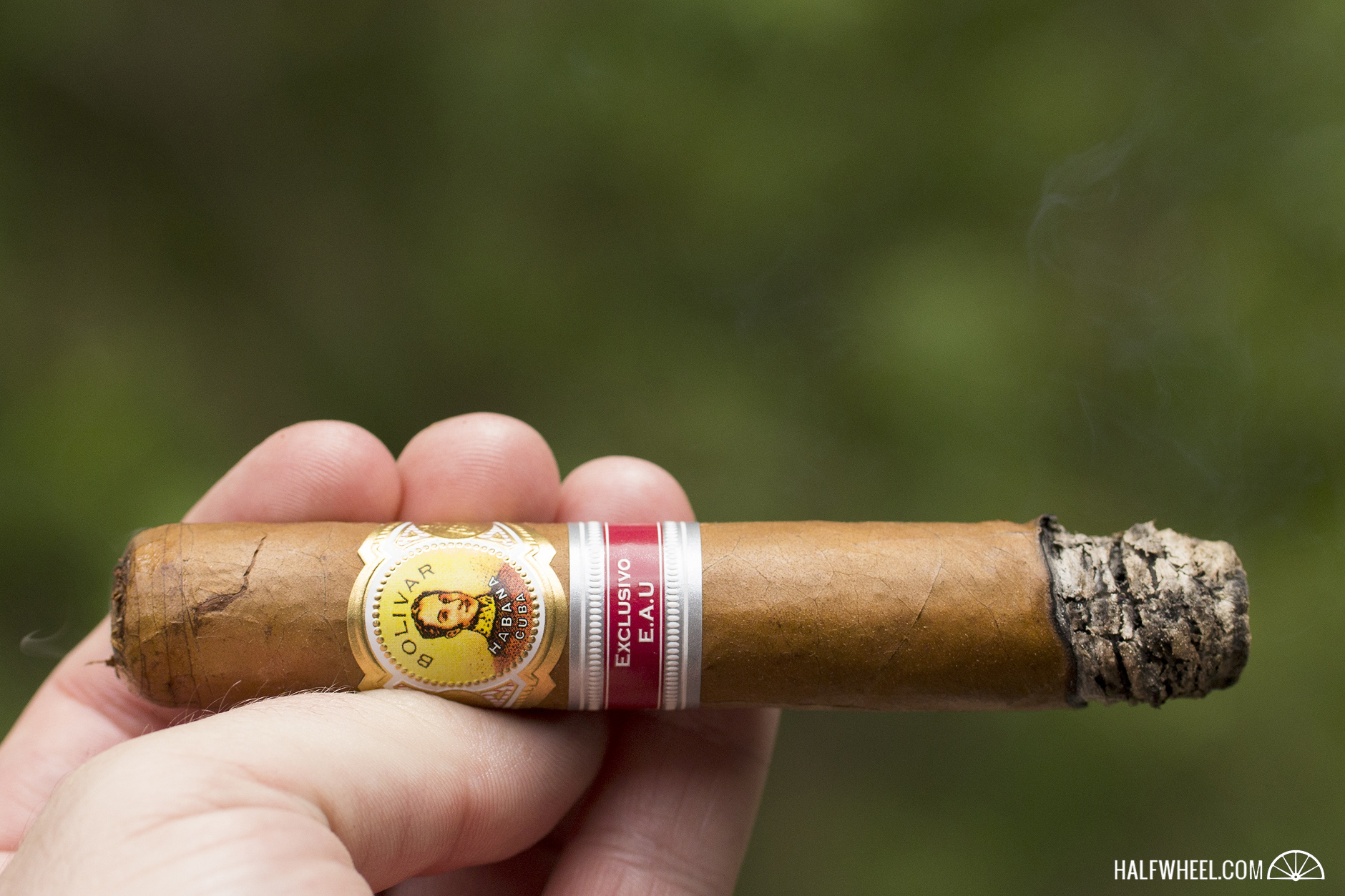 While the flavor has been good but leaving me without an abundance of words, I should note that the Bolívar Emarati has been smoking quite well, with an even burn line, a firm but serviceable draw and decent smoke production. The flavor through the first half has improved from the first puffs and now offers a palate-drying combination of toast and wood with pepper sprinkled in but not offering much punch, at least not without a retrohale. The white pepper that the Emarati does offer hides out in this smoking technique, obscured from those who don’t know how to exhale smoke out of their nose but waiting as a pleasant surprise for those that do. There’s also a bit of chalk through the nose, which further adds to the brightness of each retrohale. A bit of plain marshmallow comes in at the end of the second third and adds a touch more texture than flavor, but gives the cigar a sudden sweetness that is quite enjoyable. 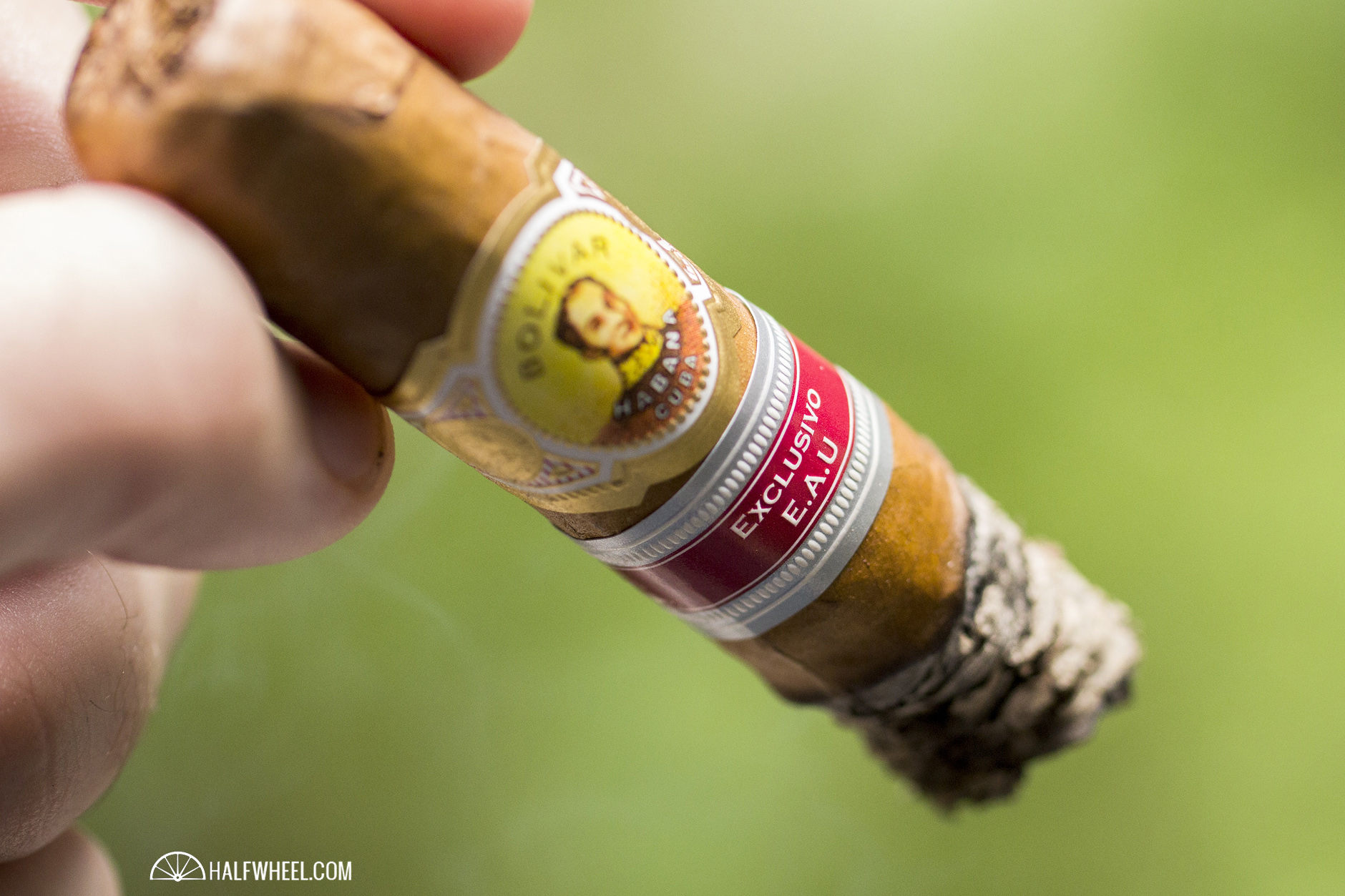 There still isn’t a ton of change in the flavor that the Bolívar Emarati is offering; the marshmallow note turned out to be fairly fleeting and the cigar returns to its relatively neutral offering of dry wood, some white toast and a bit of mixed nuts, with pepper almost completely left to the nose in the final inches save for one cigar where it is a bit more forthcoming. While the cigar continues to draw well, the burn line goes a bit askew in the final two inches of one cigar and merits a touchup to quickly rectify the situation. Heat adds just the slightest bit of harshness in the final inch and signals the cigar is ready to be put down; an enjoyable if not adventurous journey from this Edición Regional. 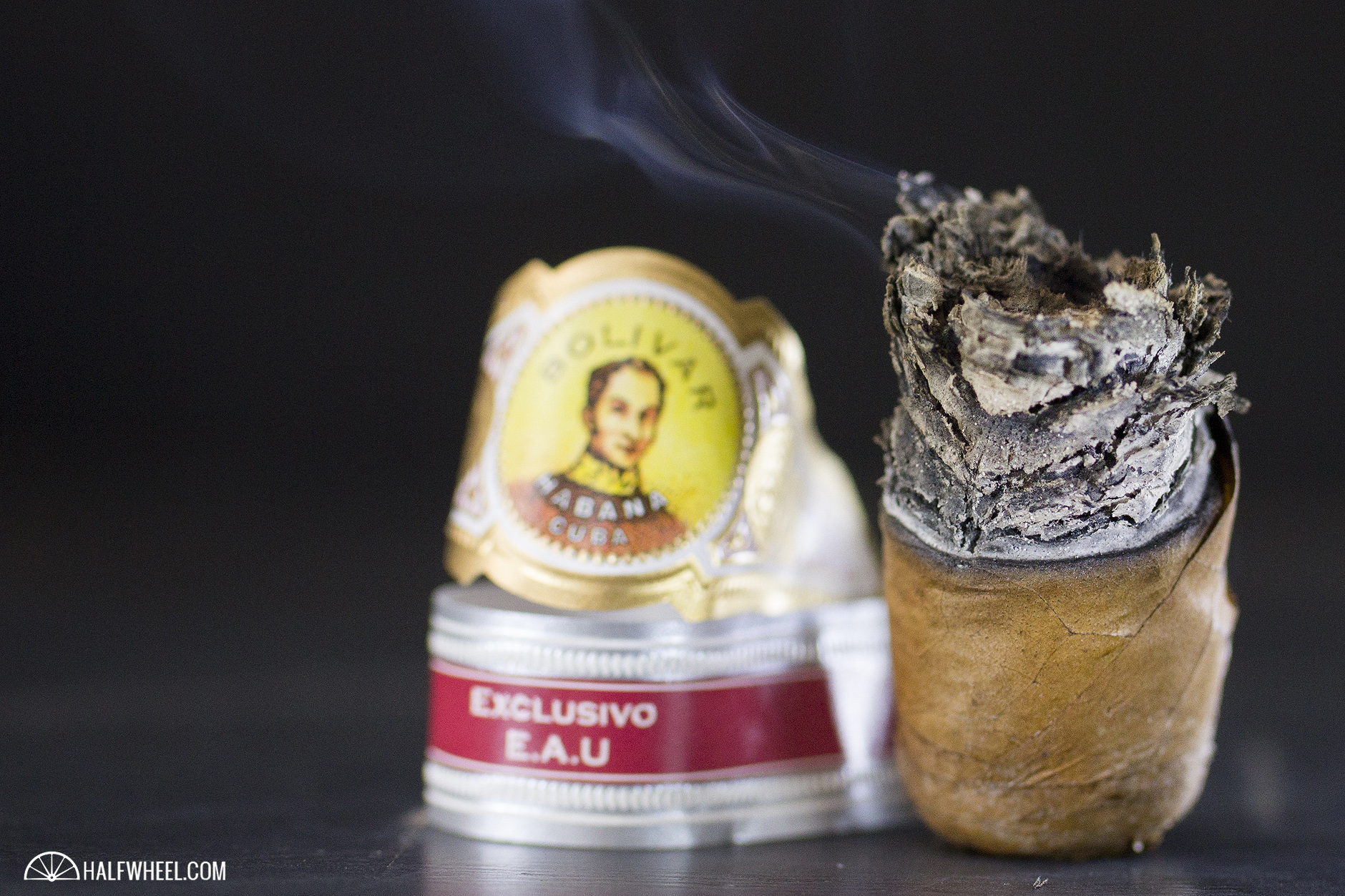 To say anything less than glowing about the Bolívar brand pains me, as a Belicoso Fino was the first Cuban cigar I ever smoked and it holds a special place in my cigar memory. At this point, there is nothing really wrong with the Bolívar Emarati; the flavors are fine after the first half inch or so, the burn and construction are fine and the size is plenty enjoyable. Yet, there is nothing that really stands out about it; the flavors are muted and somewhat mundane, and other than the bit of sweetness that comes out at the start of the final third, there is little in the way of transitions. I have to think—or maybe I just want to hope—that this will be a cigar that will come around with time and show off more than what it does at this point.