To say that I have eagerly been awaiting the opportunity to revisit the Bold by Nish Patel Robusto would be an understatement; the cigar has been on my radar ever since I reviewed it in August 2013. The offerings in the Rocky Patel portfolio run almost the complete gamut of flavor and strength choices, and while met with varying responses either based on band bias or actual performance, they remain an extensive collection that sells very well at multiple levels of the retail chain.

Which is exactly Bold was a head scratcher for me at the time. I’ll be the first to admit that not every release from the company has been a winner with me, but they have all been at least palatable and in many cases quite good. Unveiled at the 2013 IPCPR Trade Show and released first as a single-store exclusive before the national release in Fall 2013, the Bold by Nish Patel promised “well-rounded strength and complexity” highlighted by punches of white pepper and cocoa in the first half that would transition to “a hearty profile of sweet spice and roasted coffee.”

After smoking the first two cigars for this review, I was puzzled as to what to make of the Bold by Nish Patel. The flavors were just so different and so unfamiliar that I couldn’t believe what I was smoking was the latest offering in Rocky Patel’s extensive portfolio. While not all of the company’s cigars are fantastic, at least you can fairly safely say that they are all palatable, while the Bold by Nish Patel simply wasn’t. After waiting a few days to smoke the final cigar, I still found some of the same flavors but also a rough harshness in the second half that just made the cigar too unpleasant to recommend. Maybe there was something wrong with the samples, maybe the trade show took its toll on them; I don’t know. I feel almost obligated to try another one once they hit retail to compare notes because I was just so puzzled by this cigar. For now, the Bold by Nish Patel lives up to its billing as bold, but not in a way I would recommend.

Needless to say, my reaction was less than favorable but more importantly it seemed really odd for a product in the Patel portfolio. Could the cigars have been given out when they weren’t ready? Were they just really off? Was I really off? Only time would tell, and after some eight months in the humidor it was time to find out.

The Bold by Nish Patel presents an incredibly dark brown wrapper with hardly any oil on it and generally small veins with clean seam lines. It’s generally firm throughout but even more so near the head, something that was found in all the cigars smoked for this redux. On the foot, a sweet and spicy note that is complemented by fragrant wet wood is the first greeting, though second and third smells reveal hints of bigger notes underneath as the pepper becomes more apparent. The cold draw is a bit tight with a very complex flavor that offers tanginess, pepper, and some earth as the most distinguishable notes.

The first puffs are certainly on the bolder side of things, offering a hearty beef stew-like greeting with some trace amounts of pepper following along quickly that work both the nose and palate. A thick note of dark wood comes along shortly thereafter, seemingly in an attempt to drive home the bold message right out of the gate, while a thin and lingering coating of black pepper hangs out on the palate  The aroma starts to open up quickly as well with a bit of sweet barnyard and more of the same wood note found on the palate, topped off with a good amount of pepper that is sure to awaken the olfactory nerves if they haven’t been already. The flavor progression steps back just a bit about an inch in, with a chalk note filling the void and keeping the overall flavor profile squarely in the medium range, with the ash dropping off shortly thereafter. A retrohale is more or less impossible at this point at the pepper and earth notes are just too much to process. The draw seems to firm up a touch as the flavor and aroma return to their earlier levels with a fairly quick rebuilding of all the core notes. 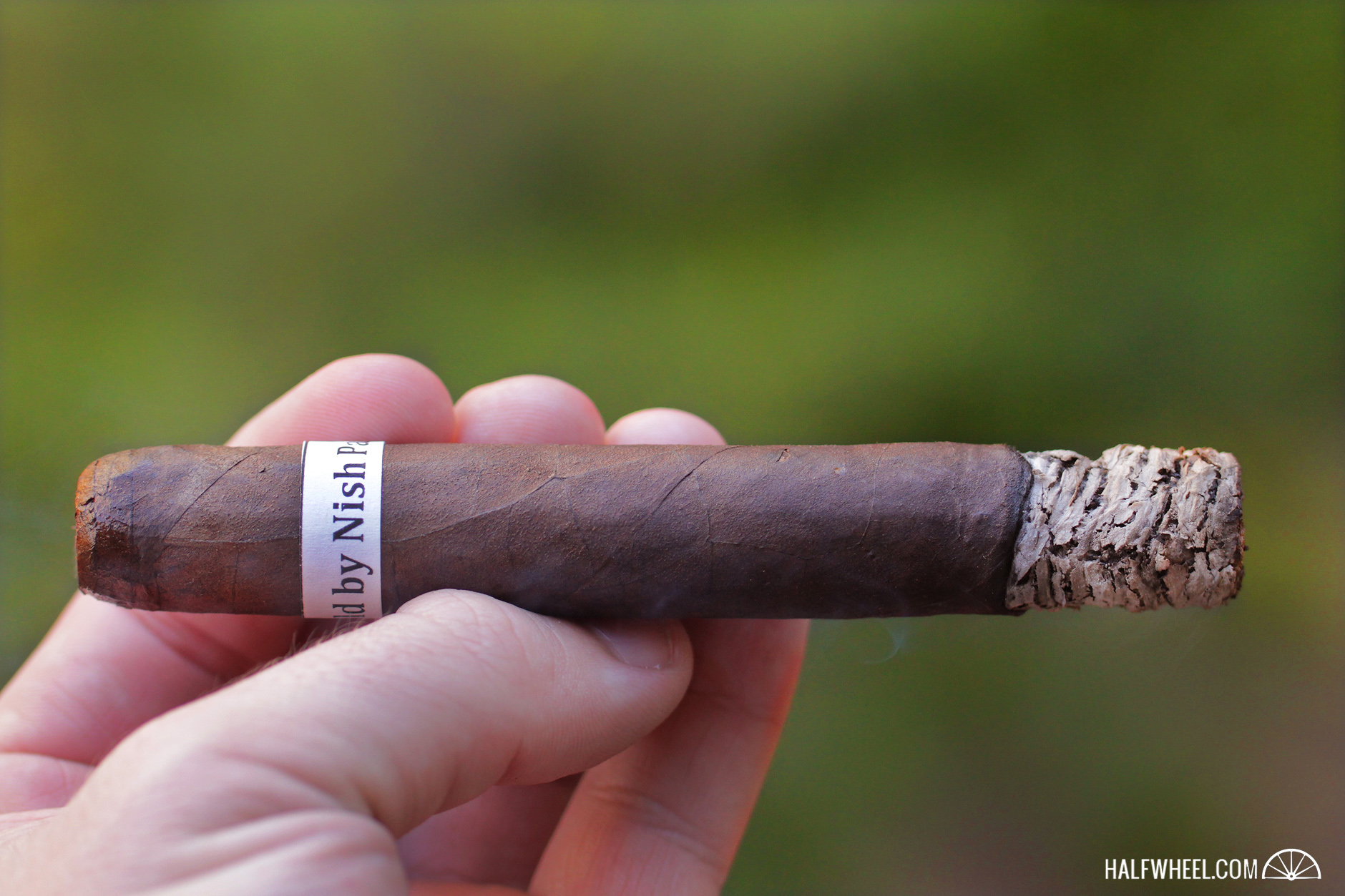 The second half begins on a much more robust note, a distinct flavor change that sheds some of the sauciness yet leaves a faint sweetness in the aroma. A steady building of a very dry black pepper note continues to eye-watering levels with about an inch and a half to go, something that seems only fitting given the bold billing of this cigar. The intensity of the finish seemed to vary from sample to sample, and in one case seemed to be significantly less strength than not only the other cigars, but the first half of that particular cigar. Provided the palate and other senses can stand the increasing boldness of the cigar as the burn line approaches the cap, the Bold by Nish Patel Robusto is able to be smoked fairly far down as the heat doesn’t seem to add any bitterness or harshness.

To say the least, this is certainly not the same cigar I smoked back in August 2013, which at the time was just barely palatable. Time has done a fantastic service to the Bold by Nish Patel, and while they may still be too bold for some palates, they would be well received by those who crave a flavor challenge and can handle the significant pepper notes and what can be a bit of sensory overload. Interestingly, the samples from the trade show seemed stronger than those I smoked off the shelf for comparison, so I would suggest that your experience with the Bold might be a bit mellower than mine. Either way, this is almost a completely different cigar and one I certainly have different feelings about.