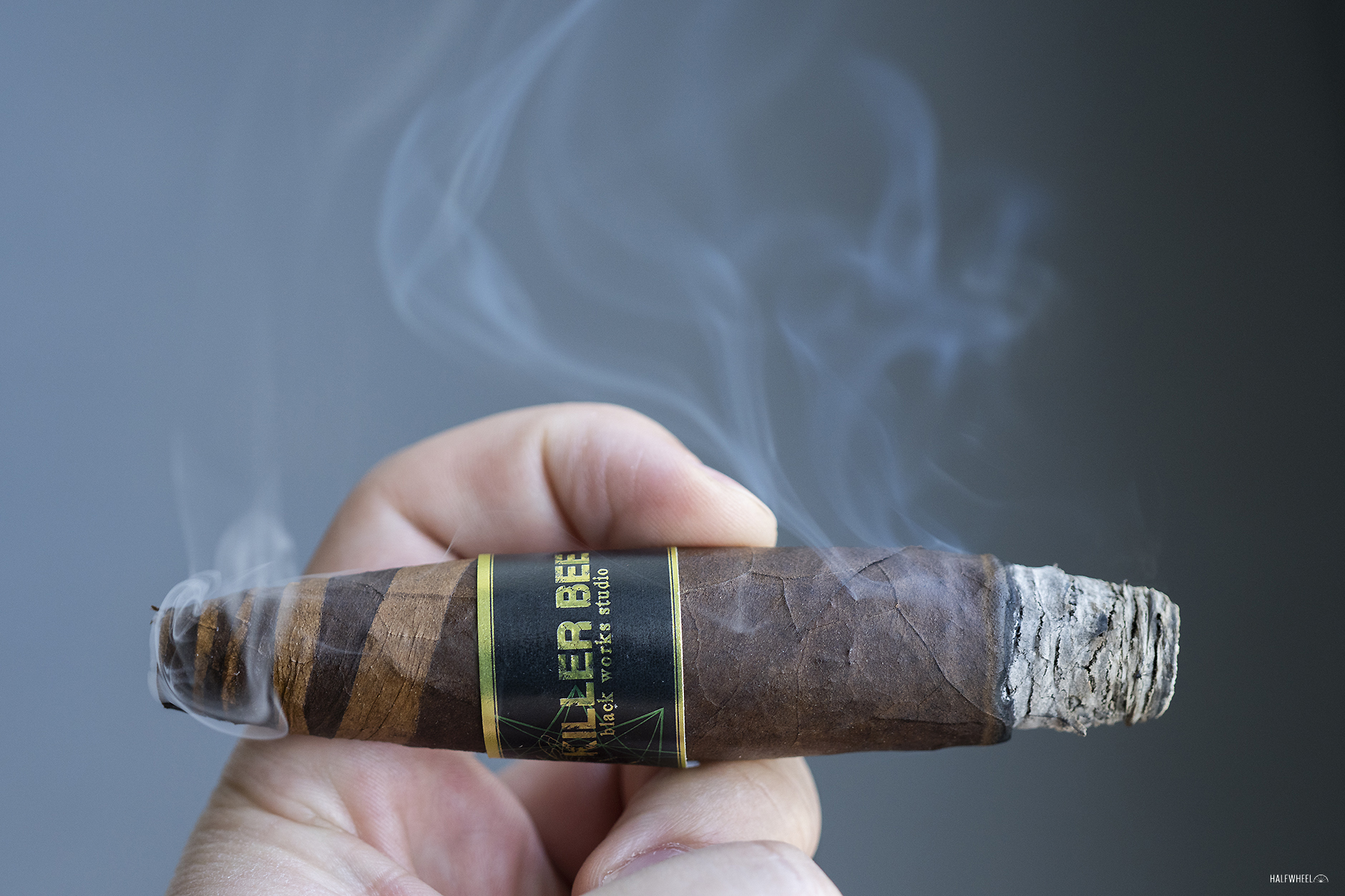 If I had to make a list of memorable products from the 2021 PCA Convention & Trade Show, Black Works Studio’s The Hive would be a pretty early entrant. In a year when samplers of all shapes and sizes seemed to be more en vogue than samplers normally are, few captured my attention quite like the 27-count sampler centered around the company’s series of cigars named after bees and other stinging insects. 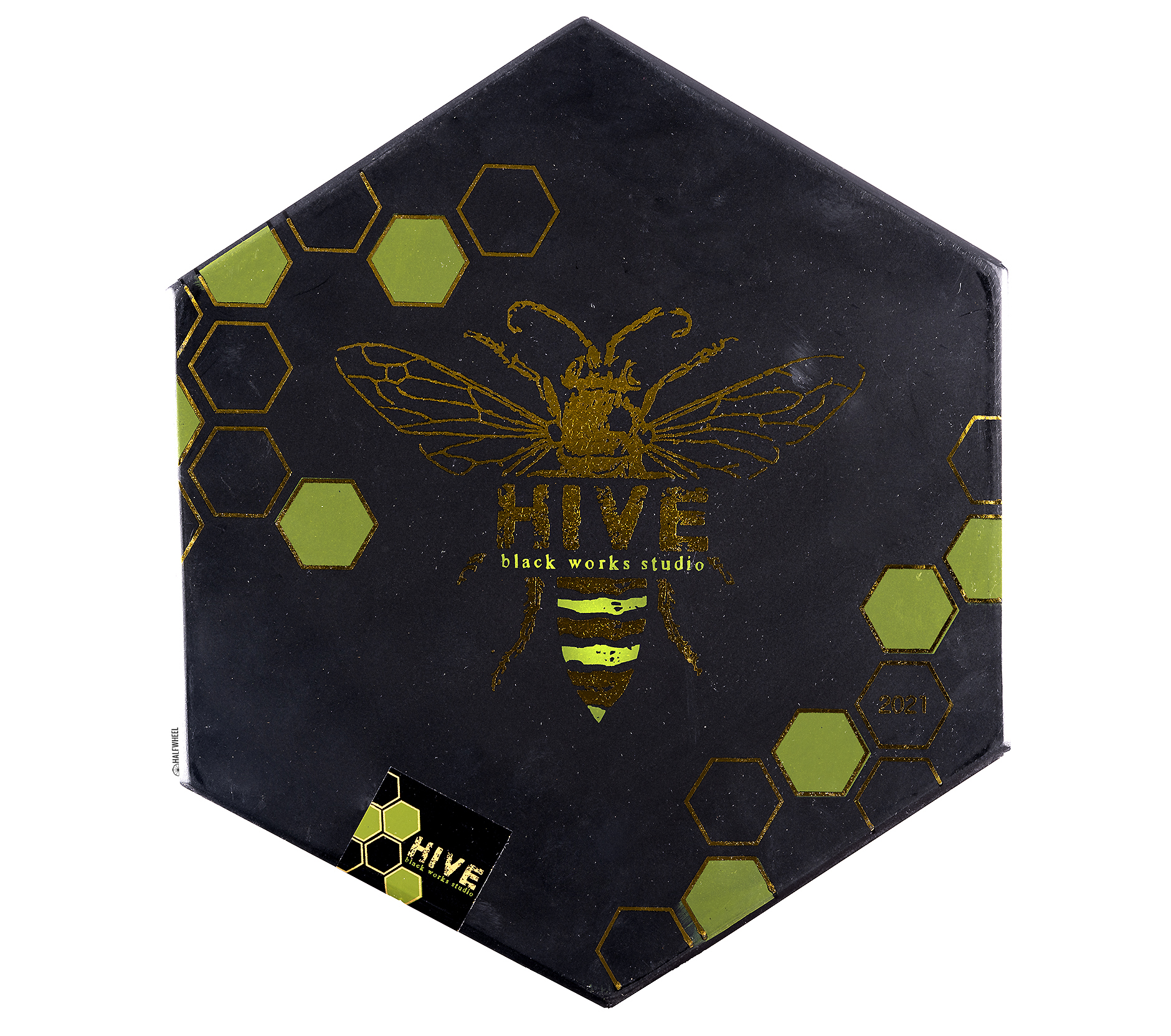 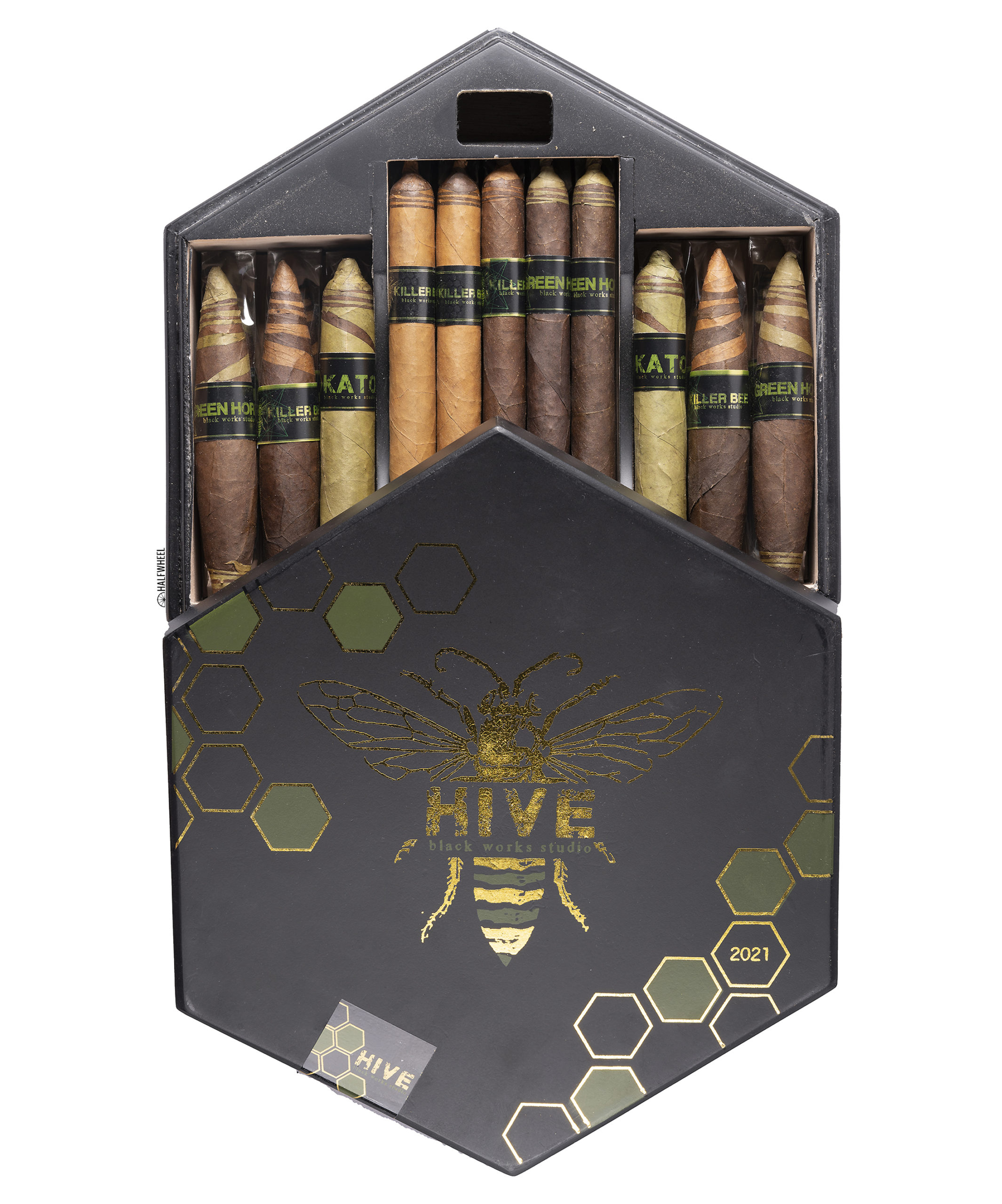 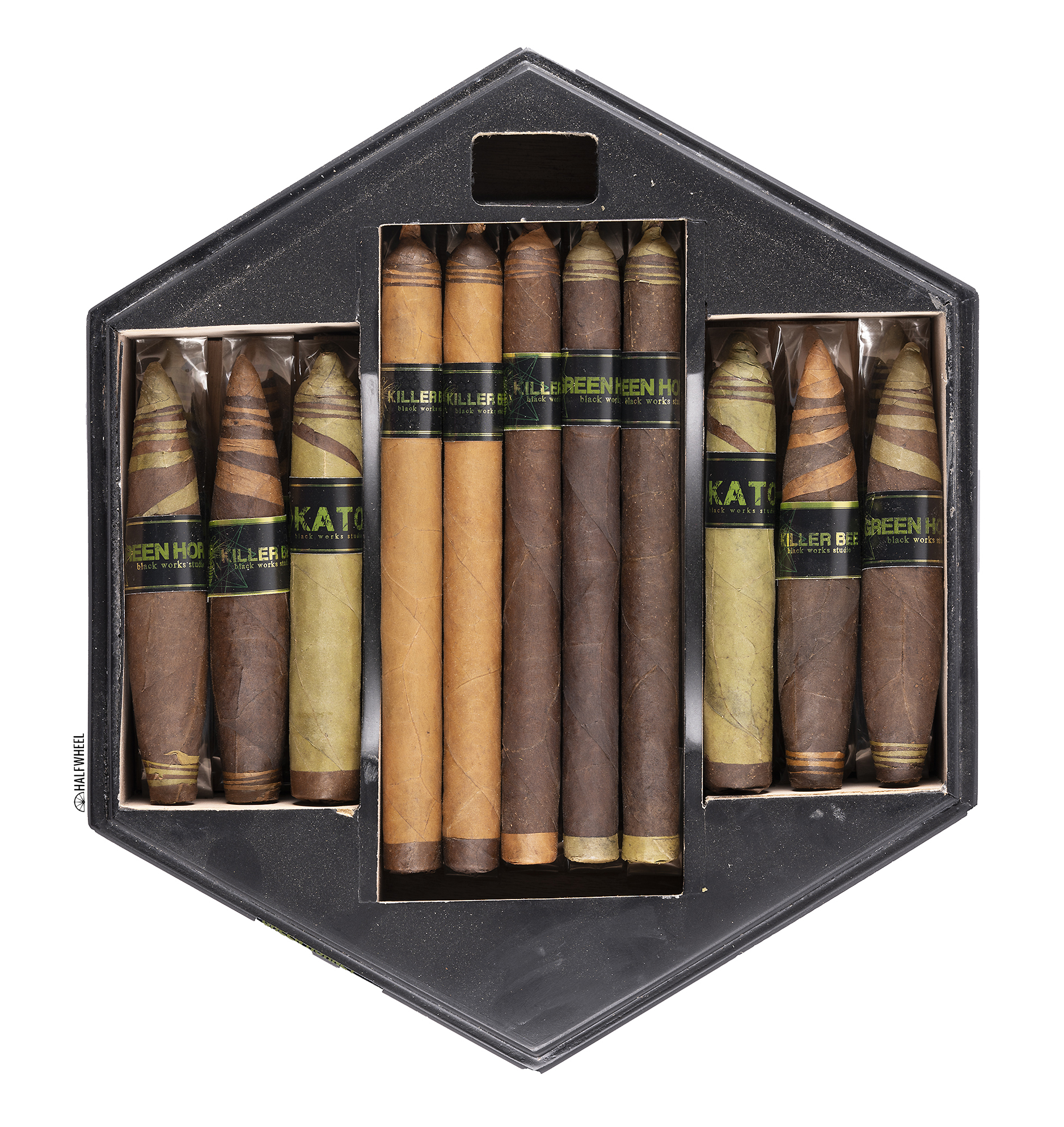 The box is a hexagon, reminiscent of the shape of honeycomb. Inside, are six different cigars, all of them new and, so far, exclusive to The Hive sampler. The quantities of each of the six cigars range from three to six cigars. 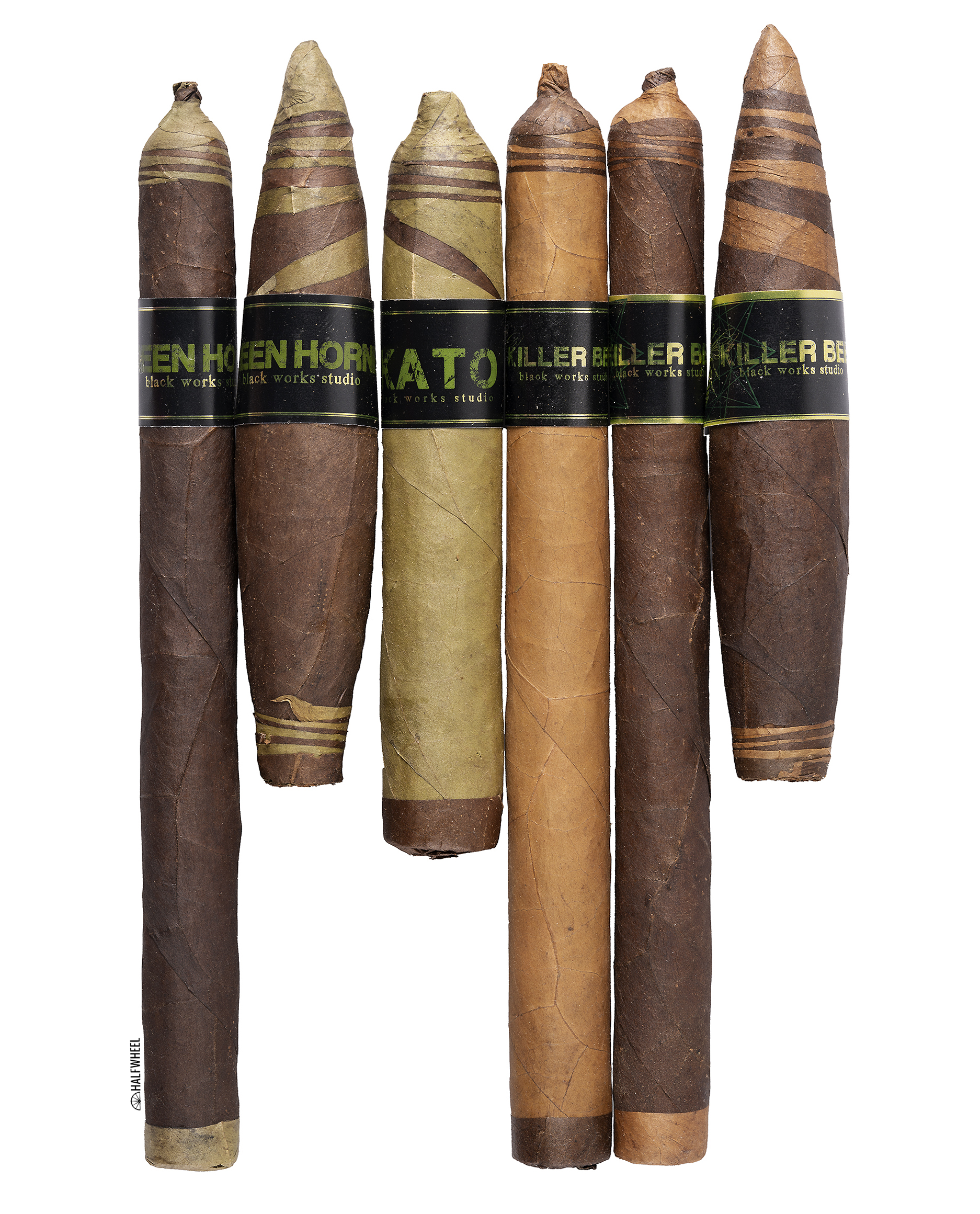 “HIVE is an idea I’ve had for a few years now,” said James Brown, creator of Black Label Trading Co. and partner at Fabrica Oveja Negra, in a press release. “The Killer Bee & Green Hornet lines are some of our most popular and over the years I’ve played with a lot of different ideas for both. The HIVE is a mix of some of my favorite Bee & Hornet samples that have yet to be released. For anyone that is a fan of the Killer Bee & Green Hornet, this is a must have!” This is one of the most radical-looking cigars you’ll see. The shape itself is pretty different, but that’s a complete afterthought given all that’s going on with the wrappers. Depending on the cigar, there are between three and four dark stripes up top and four light stripes on the bottom, though you’ll need to turn the cigar to see the full array. As interesting as it all looks, upon closer inspection it’s not the cleanest cigar ever rolled. I don’t think it’s fair to criticize the evenness of the stripes, but I’m surprised how loose the seams of the main wrapper are on each cigar. In the above picture you can see a bit of this on the right side. The aroma from the Killer Bee Perfecto is a medium-plus mixture of barnyard, roasted coffee and acidity. It’s pretty reminiscent of the aroma of a cup of generic black coffee that is brewed too hot. The foot is medium-plus with earthiness over barnyard, floral sweetness, black tea and a bit of pepper. My normal approach is to cut off a smaller amount than most as I like draws a bit tighter, and then perform a second cut if I think it’s necessary. I’m surprised how open the draw is after cutting off less than a third of an inch of the cigar. Flavor-wise, I pick up earthiness, some acidity and, at times, a soapy flavor.

The Black Works Killer Bee Perfecto begins with a medium-full mixture of oak, earthiness and some burnt meatiness that reminds me of poultry more than beef or pork. There’s a fair bit of black pepper that reminds me of Connecticut shade tobacco, though there isn’t the accompanying creaminess that I typically find. Fortunately, the draw is tighter than it was on the cold draw, though it’s not too tight. The profile is led by earthiness over creaminess, sunflower seeds, mineral flavors and a hard breadstick flavor. It finishes with a damp earth, sunflower seeds, a crisp bread flavor that reminds me of Pringles, some nuttiness, and white pepper. One sample is similar to the other two save for green pepper replacing white pepper and some added lemon. Retrohales remind me of the complexity of previous Killer Bees: earthiness and graham crackers over an orange liqueur, nuttiness, peanut shells and leather. The finish sees the peanut shells come to the forefront, on top of creaminess and some sort of sauce flavor that reminds me of a balsamic glaze, though not entirely there. Flavor is medium-full, body is medium-plus and strength is medium-plus. Construction is great on two cigars, though one cigar needs touch-ups to deal with an uneven burn.

My lasting impression of the Killer Bees I had before the first third of this cigar was that of an excellent cigar, which is not how I would describe the decent—but not great—first third. The complexity knob gets turned up in the second third and I’m all about it. Earthiness remains the strongest flavor, but the secondary flavors close the gap intensity-wise and increase in the quantities. Those flavors include sunflower seeds, leather, straw, a cream soda-like sweetness, mineral flavors and some burnt sensations. The finish is a bit sweeter thanks to the cream soda flavor, though there’s plenty of contrast with a vibrant darker earthiness, minerals, leather and some black pepper. Retrohales have leather, lemon, Ritz crackers and a touch of cinnamon. There’s a building herbal flavor that intensifies towards the retrohale’s finish. After 15 or so seconds, I’m tasting leather, Ritz crackers, hay, lemon, sourdough bread and black pepper. What’s bizarre is almost all of those flavors are on the back of the throat, while the rest of taste buds seem to just detect earthiness. Flavor is medium-full, body is medium-full and strength picks up full. Of note, the retrohale is milder than the main flavor, I’d peg it closer to medium. All three cigars need a touch-up for one reason or another. 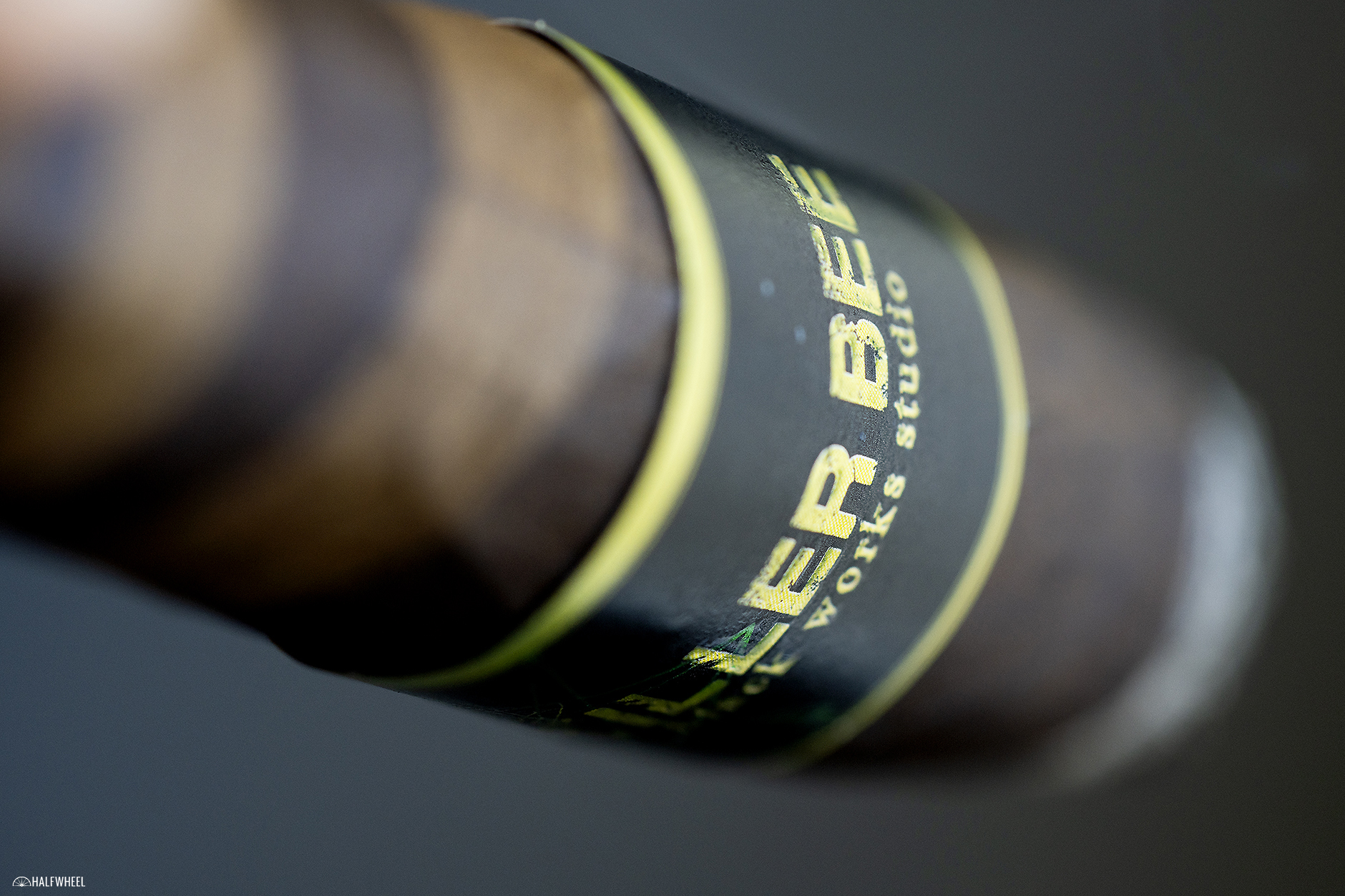 While the first and second thirds were pretty similar, or at least as homogenous as this odd collection of flavors could be, the final third is quite a bit different. Each cigar gets a lot toastier, pushing the earthiness into a secondary flavor. Each cigar has a different type of creaminess, but creaminess nonetheless, and between the three cigars I find leather, a fruitiness that reminds me of canned cranberry sauce and mineral flavors. The finish is not particularly pleasant. There’s a potent mixture of barnyard, white pepper and black pepper. I still taste earthiness, but I think that might be more of a residual flavor. Retrohales have leather, earthiness, creaminess, minerals and a generic cracker flavor. As intense as the main flavor’s finish is, the retrohales finish with honey, earthiness, creaminess and a touch of pepper. Flavor is medium-full, body is medium-full and strength is medium-full. Construction-wise, two cigars need touch-ups while one avoids any assistance from the lighter. 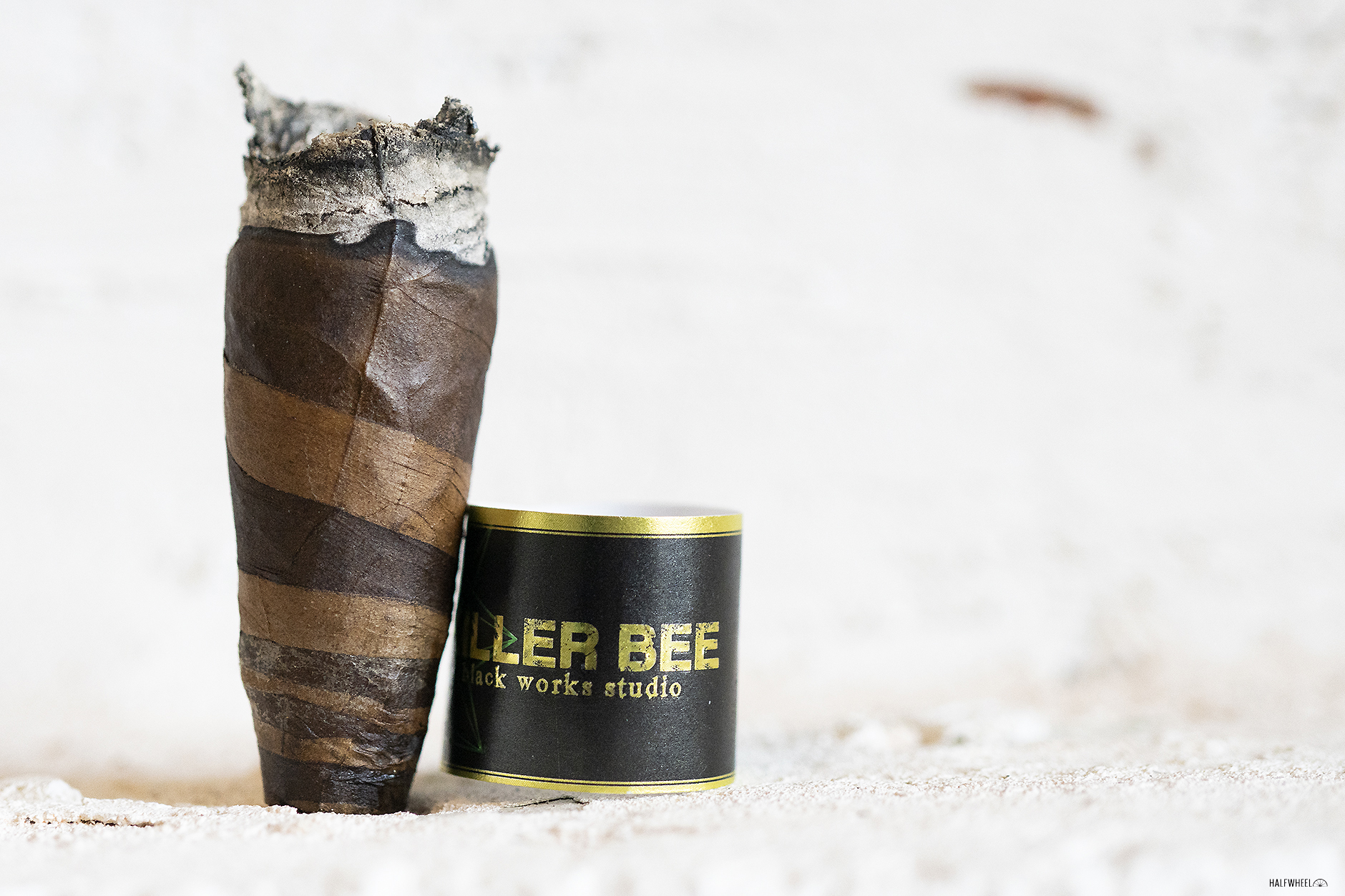 Pulling back the curtain a bit, this is my second attempt at writing this bottom line. The first time, I spent way too many characters comparing the Killer Bee Perfecto to the two previous Killer Bees I’ve reviewed, both of which were good enough to earn consideration for our Top 25 lists in the respective years they were reviewed. In short, this isn’t as good as either one of those cigars. But, I don’t think it’s fair to just focus on the comparison between the three cigars. The Killer Bee Perfecto is a mixed bag. At times, there were puffs that were as enthralling as I could hope just about any cigar could be. Other times, there was a sustained number of puffs led by a pretty generic earthiness on top of some other flavors that weren't enough for me to recommend buying a whole sampler just to smoke this cigar. The construction issues hurt the score, but it’s not the main takeaway. While the second third was bordering on excellence for its complexity, the first and final thirds failed to provide the same sort of exciting profile.