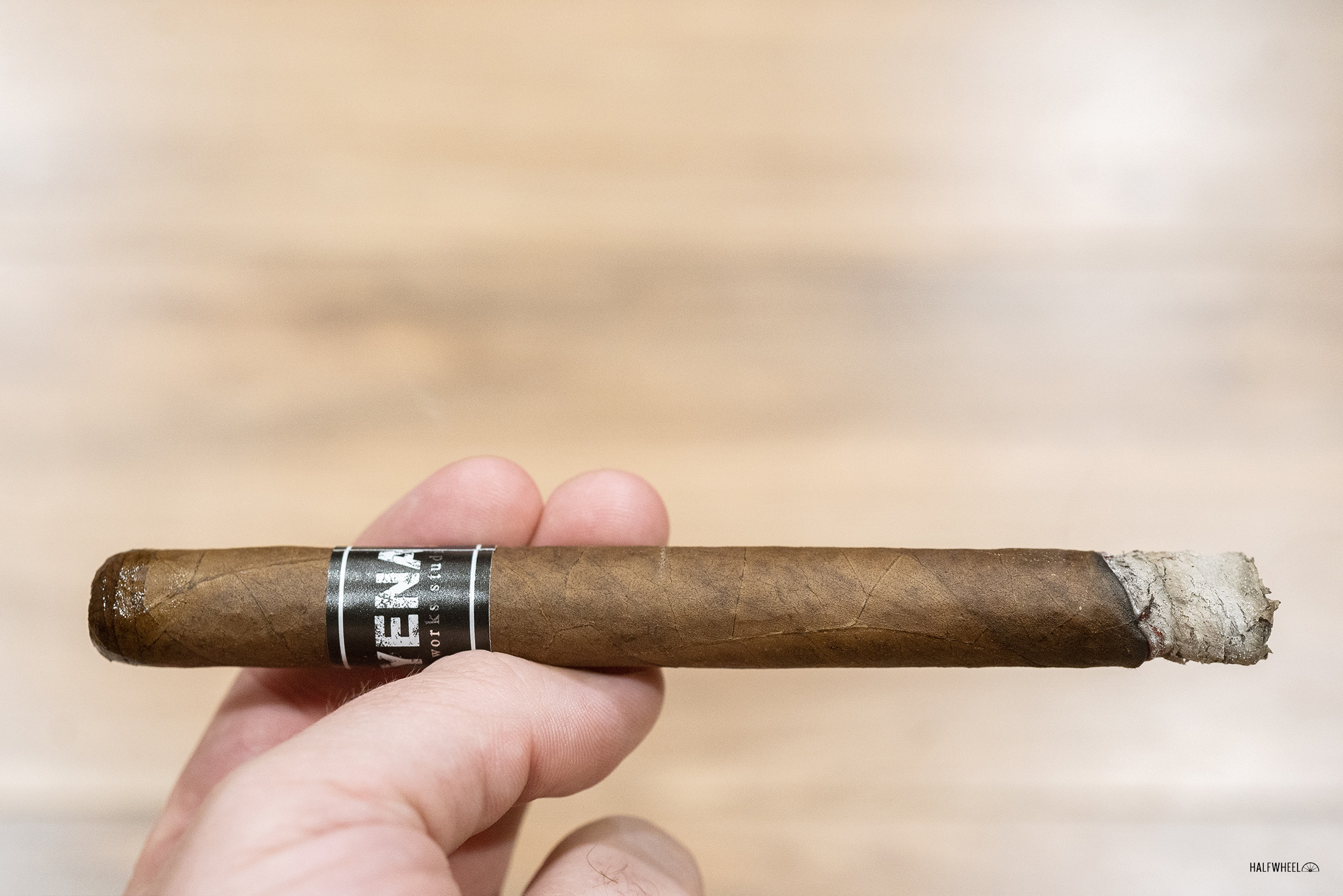 A term that has come into my vocabulary as of late is inflection point, that spot where the trend bends and changes direction. It’s come into usage with the pandemic, but it certainly has a fairly wide field where it is applicable.

One of those would be blending trends in the cigar industry, and if you’ve been around long enough and paid enough attention, you’ve likely seen them. The rise of Ecuadorian tobacco, the return of Mexican tobacco, changes in common sizes of cigars and numerous other things all started as blips on a radar and eventually became genuine trends.

I bring that up because towards the end of 2020, Charlie Minato and I had some conversations about what seemed to be a building trend in the cigar world: the use of Cameroon tobacco by Nicaraguan manufacturers and with Nicaraguan tobacco. It was a conversation spurred by the Warzone Short Churchill, the third vitola in a collaborative line from Espinosa Premium Cigars, a Nicaraguan manufacturer, and General Cigar Co., a company that uses a fair amount of Cameroon tobacco across a number of its lines. That cigar went onto claim the #18 spot on halfwheel’s Top 25 Cigars of 2020 list

That was after RoMa Craft Tobac had begun releasing its Baka line, which uses Cameroon tobacco over an undisclosed binder and filler. And during the summer of 2020, Black Works Studio released its Killer Bee The Swarm, which picked up a 91 rating and just missed making the Top 25.

Black Works would start 2021 with another Cameroon-wrapped cigar, this time a new cigar called the Hyena, one of the first releases of the year for the Black Works Studio brand, otherwise known as BLK WKS. James Brown created a blend that uses an African Cameroon wrapper, a Nicaraguan habano binder and Nicaraguan fillers, though specifics of the fillers have not been disclosed.

He called the blend “a perfect balance between Nicaraguan fillers and the Cameroon wrapper,” adding that it’s not only a complex and balanced cigar but a tribute to the several years that he and his wife, Angela, lived in Africa. 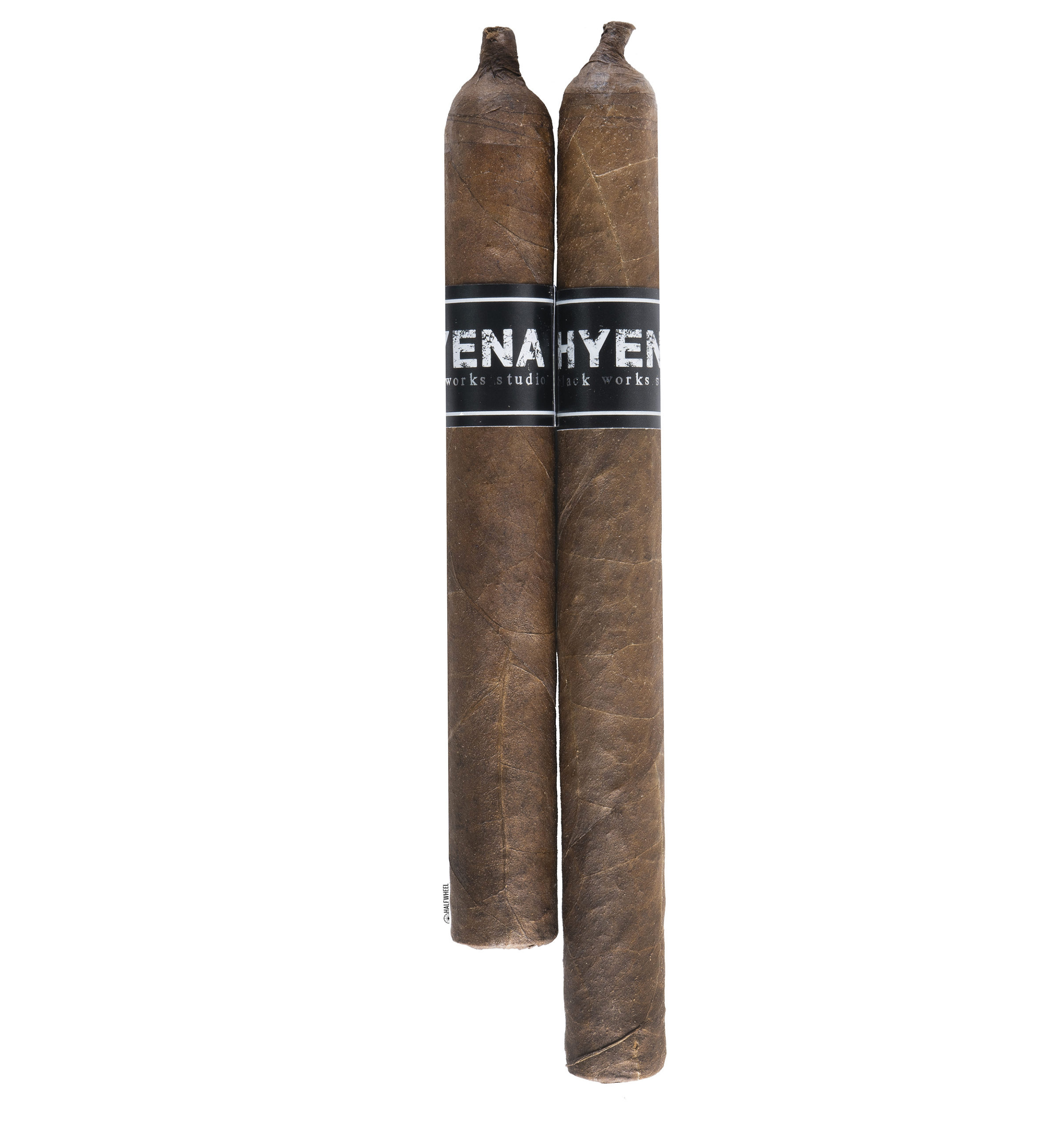 The Hyena is be offered in two sizes:

Production is limited to 700 boxes of each size, both of which have a rabito cap, a shape that looks like a nipple. The company says it will be offered to stores in the U.S. and Europe, with shipping beginning in March 2021. 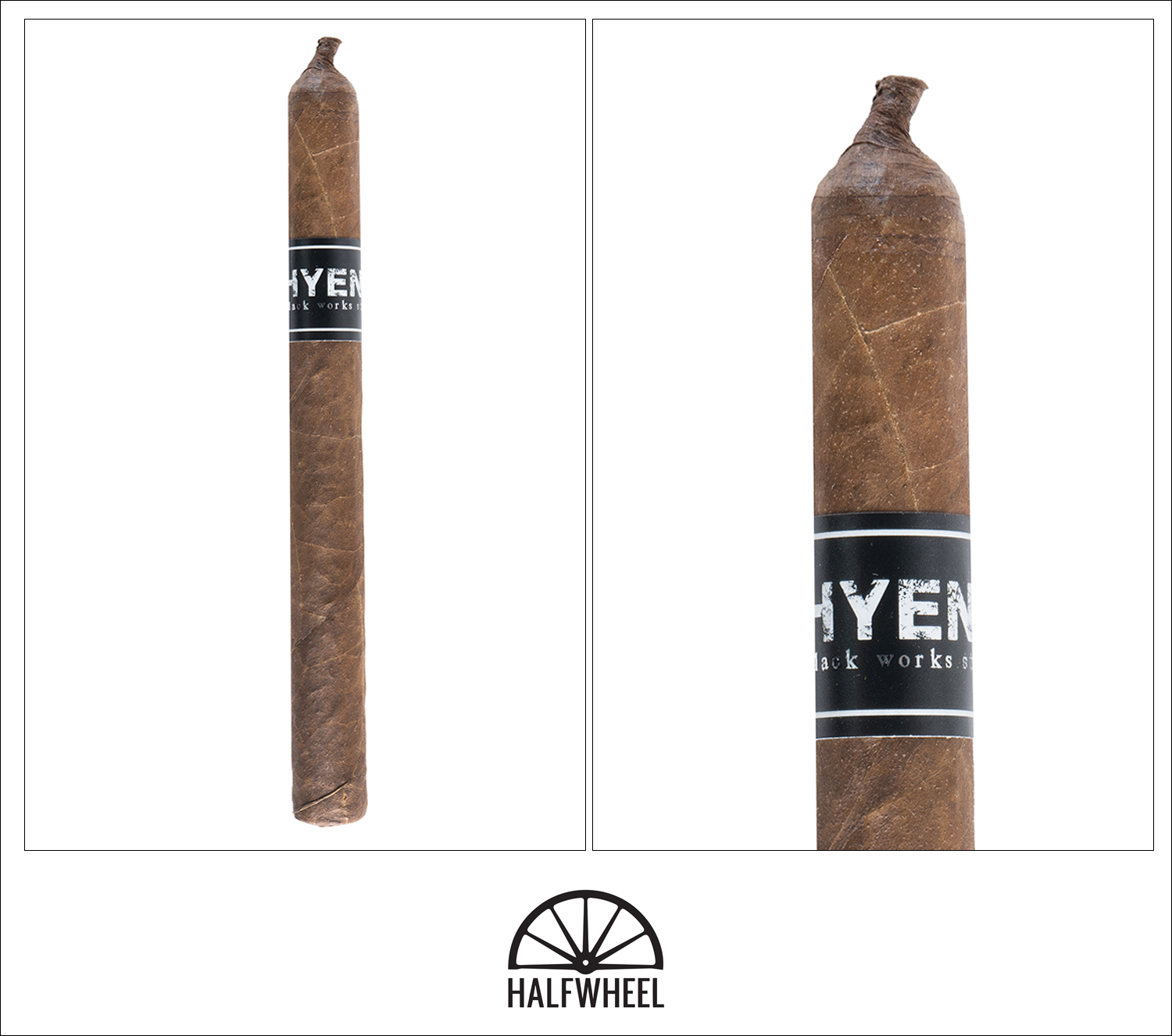 Depending on what side of the cigar you happen to be looking at, you either have a very good idea what this cigar is or likely no clue. That is because one facing of the band has HYENA in clear block letters with Black Works Studio underneath it, while the other facing has what I would refer to as back alley graffiti that is undecipherable to those not in the know. Beyond the band, the cigar looks pretty good, with my eyes drawn to the thick twist of tobacco at the cigar’s head. Otherwise, the cigar looks good and on par with others in the premium sector. Veins are small and thin, there isn’t a lot of tooth to the wrapper but there is a touch of texture to the leaf. It’s rolled to the point of being just in the firm range while still offering some give, and I’m certainly not going to test the wrapper with a more aggressive squeeze. The partially covered foot still allows me to get the full aroma of the blend, a combination that is slightly damp and nutty but also offering something more than just that. it’s a smell that is familiar yet I can’t quite place it, almost like the damp woodiness of an old house, though that doesn’t quite match what I’m smelling. The cold draw is smooth and easy with a bit more and thicker sweetness, a bit less dampness, and a touch of the nuttiness found in the aroma, with occasional forays into a bit of chocolate brownie.

By the time I’m ready to start writing down some flavors, I’m amazed to see how quickly the first three-quarters of an inch have burned and revealed a very light gray ash. There’s a fairly smooth and creamy central flavor in the early goings, with just a bit of light pepper emerging to tickle the front half of the tongue. I’m led to think that I’m getting just a bit of an ashy taste, though I can’t quite make the direct connection. While the smoke is mild but building on the palate, it is much more awake and alive via retrohales, notably with a combination of white pepper and creaminess in about a 60-40 ratio. For those looking for the sweet and spicy notes that I think often get associated with Cameroon tobacco, the first third isn’t overflowing with them, but there are a few to be found. In blends like this, without smoking the individual components individually before smoke the finished cigar, it’s tough to ascertain just what is in the mix, and that’s before accounting for the natural variance with batches of leaves. The final puffs of the first third pick up just a touch of harshness, enough to elicit a couple of coughs. Technical performance in the first third is nearly flawless, with an easy draw producing tight clumps of ash, while the burn line is very even and the smoke production is very good. Flavor is an easy medium for most of the first third but finishes medium-plus, while body is generally medium-plus and strength is a tick below medium.

The touch of harshness that emerged at the end of the first third turns out to be the introduction to some earthiness and black pepper, which in turn gives the cigar a decidedly Nicaraguan flavor. While the variety of the filler isn’t disclosed, there is definitely some hints of the habano binder, minus the woodiness I tend to find from that leaf, which could simply be a function of its specific origin. The hunt for the flavors I have come to associate with Cameroon tobacco remains just that, with a bit of spiciness showing up at times but not as much of the sweetness. Once the burn line is across the midway point, I get a bit more of a chili pepper heat, a more distinct and singular expression of the spiciness of earlier, and one that is particularly vibrant through the nose. There’s less of the earthiness now, and what I do get has a bit more of a dusty character than it did earlier. The section finishes with a bit of apple cider joining the flavor, giving the flavor a bit of tart sweetness. Construction is still very good, though combustion struggles just a bit when not puffed with a fairly regular pace, generally a tick or two faster than I would otherwise smoke a cigar. Flavor is medium-full and close to outright full, while body fluctuates around the medium mark. Strength is leveling off at medium-plus, though it seems like it might take another step forward. 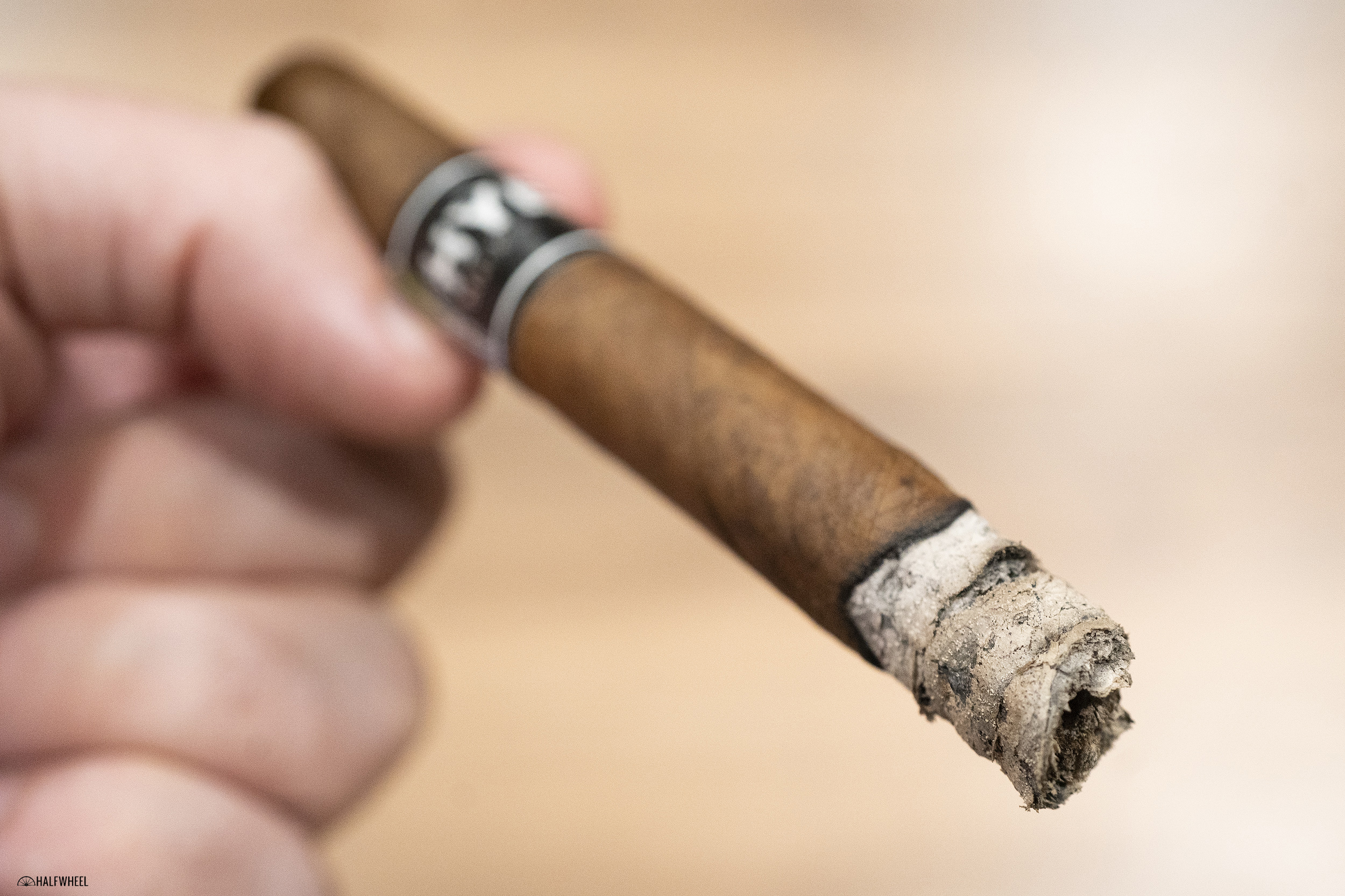 The final third returns to a profile where the dry earth and black pepper components are driving the majority of the profile, and it’s here that I notice the creaminess from earlier is almost completely gone from the profile, with one of the three holding onto some of it. Not long after the cigar begins running through its flavors in fairly rapid succession, with the spicy red pepper stepping forward first. Creaminess comes back into the profile in the final two inches or so, an addition that helps to fill out the profile and physical sensation, without overpowering or dampening the vibrance of the other flavors, which in this case is mainly the dry black pepper. There is still some dry earth, but it has lost some of its range and is much more a mild accent than playing a meaningful role. It’s a rapid and enjoyable succession of flavors, kicking the cigar up to full flavor by the end, while body is medium-plus and strength is a decent medium-plus. Combustion issues aside—mainly because they seem to be on my end and not the cigar’s—the Hyena burns and smokes very well. 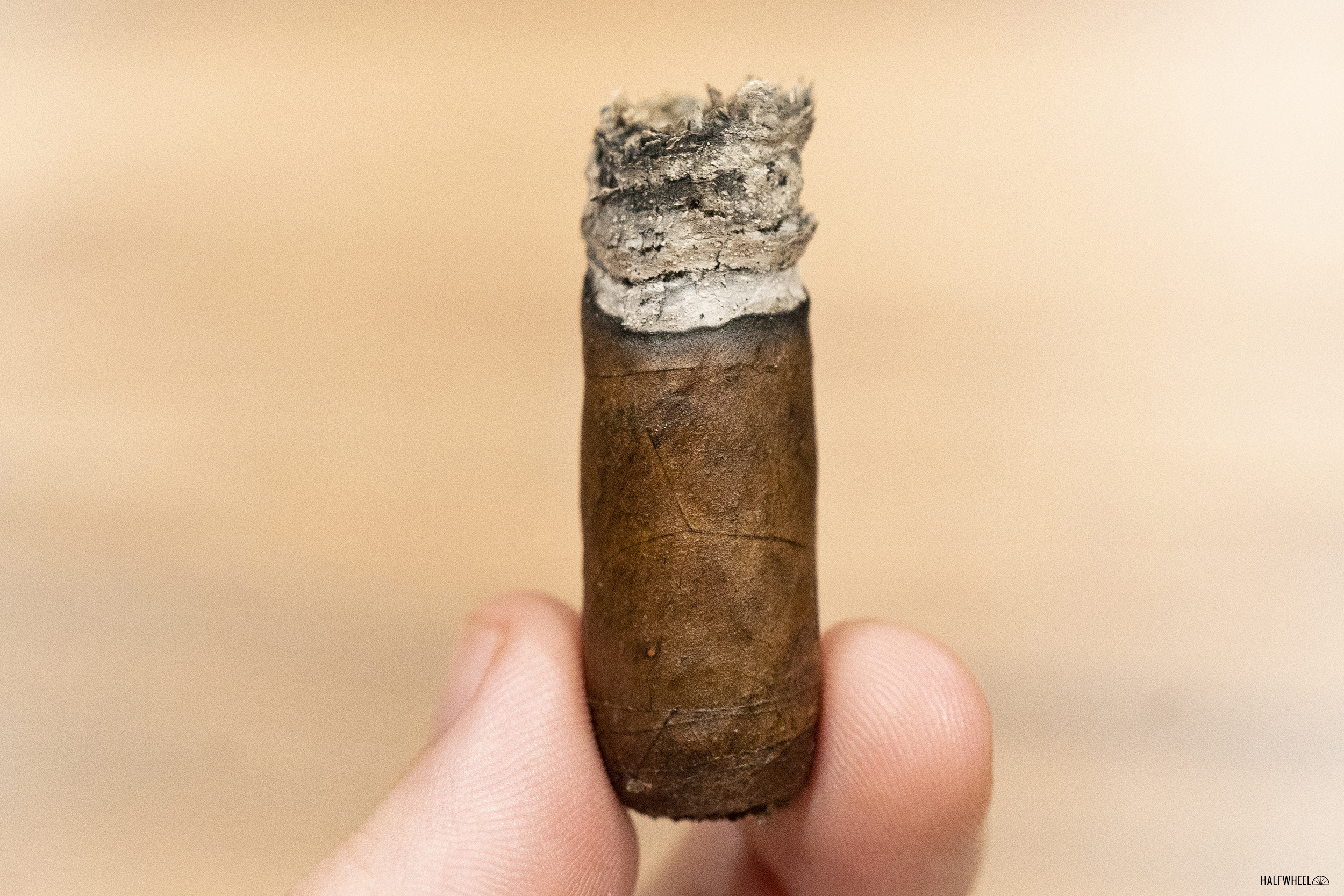 While I still think the idea of Cameroon wrappers and Nicaraguan binders and fillers is still a bit of a work in progress, the Hyena is certainly one of the better blends I have tried, and one that gives me an optimistic outlook for what might be coming down the road. Part of the experience of smoking a cigar like this is not trying to compare it to blends that have come before it and set the standard—or at least my standard—for Cameroon wrapped cigars. It also makes me wish I could smoke the wrapper and the other components on their own so as to understand just what the raw ingredients taste like as well as what is gained and lost when combined. If you asked me to pick out a Cameroon-wrapped cigar, I'm still most likely leaning to one of the Dominican-made cigars that seem to do a better job putting the wrapper front and center, but this would certainly give me a more than respectable fallback option should one of those not be available.