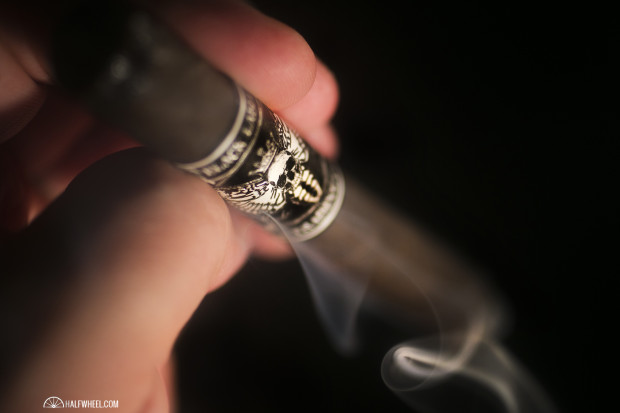 In March, Black Label Trading Company announced a new blend named Morphine. Two different vitolas, a Lancero (6 x 38) and a Corona (5 1/2 x 42) were announced each priced at $10 with the Corona offered in boxes of 18 and Lancero in boxes of 12.

Morphine features a dual Mexican San Andrés and Ecuadorian maduro wrapper. Honduran and Nicaraguan fillers are used along with a Nicaraguan binder.

Black Label Trading Company founder James Brown had this to say about the blend:

The goal was to give our customers what they have been waiting for. Something big, bold & badass. They expect our smokes to be unique and out of the box when it comes to flavor profile. Morphine is exactly that. Everyone thought I was a little crazy when I explained the double wrapper idea but combining the Ecuadorean (sic) maduro wrapper with the San Andres (sic) elevated the cigar to a whole new level of richness and complexity.

In April, it was announced that the Morphine would be released at a party at the Rahr & Sons Brewery held in conjunction with the UnderGround Cigar Shop & Lounge in Fort Worth, Texas on June 8, 2014 with the cigar shipping to retailers the next week. The Black Label Trading Company Morphine Lancero immediately sets the tone when you see it covered in an almost jet black wrapper that is devoid of any obvious oil and extremely rough to the touch. It is a bit spongy when squeezed and there are no major veins anywhere that I can see. Aroma from the wrapper is a combination of leather and barnyard with a little pepper thrown in, but the only flavor I can taste on the cold draw is a slight cedar mixed with generic tobacco.

The first thing I notice on the Black Label Trading Company Morphine is the draw, which is quite a bit tighter than I normally like. When I finally get it lit, the profile is fairly straightforward: gritty earth, leather, oak, barnyard, hay and bitter coffee with some slight generic sweetness interspersed every now and then. There is a little black pepper on the retrohale that seems to be getting stronger as the first third progresses, but no spice at all at this point. The burn is good and smoke production is actually heavier than I expected considering how tight the draw is. Thankfully, the draw opens up significantly in the second third of the Black Label Trading Company Morphine, allowing me to taste a few more flavors in the profile: creamy nuts,  bitter espresso, oak and barnyard. The generic sweetness from the first third has morphed a little, and I can taste some licorice notes every now and then, and the black pepper on the retrohale has gotten stronger as well. The burn remains very good, and the smoke production continues to be higher than normal as well. Strength-wise, the Morphine lancero ends the second third firmly in the medium category, but I can tell it will go higher before it is done. A nice toasty note starts to become noticeable around the start of the final third of the Morphine, although it never gets strong enough to become dominant in the profile. Other flavors flit in and out: barnyard, earth, dark and powdery cocoa, hay and espresso, along with a slight increase in the amount of black pepper on the retrohale. There is still no spice on the palate that I can detect, but the licorice sweetness holds steady until the end of the cigar. The draw has loosened up even more, and it now just slightly tighter than I like, and the burn is still doing quite well. While the strength has not increased as much as I thought it would, it still manages to break through the medium mark, albeit not by much. Extreme construction issues for some of the samples aside, the blend of the Black Label Trading Company Morphine Lancero is actually fairly enjoyable with a dominant combination of gritty earth, black pepper and cedar that does not let up. Yes, the profile could be more complex, but if James Brown was shooting for a full-bodied, dark, earthy and bold profile, he nailed it for sure. I can easily recommend trying it out, and am interested to see how the Corona changes the experience.