Remember you (must/have to) die.

That’s the English translation of the Latin phrase memento mori. It’s an incredibly powerful phrase that has been incorporated into religion and philosophy, often symbolized with a skull.

It’s also the name of a new release from Black Label Trading Co. which shipped to stores in three sizes in March 2021. Of note, like some other recent releases from the Oveja Negra family, the cigar itself is not new, as it has been available at the Fábria Oveja Negra factory prior to getting a more widespread release. The cigar uses a Pennsylvania broadleaf wrapper over an Ecuadorian habano binder and Nicaraguan fillers. Each size was limited to 850 boxes for the U.S. as well as additional cigars sent to Europe.

“Memento Mori is exactly what you envision when you think of a Black Label Trading Co. cigar,” said James Brown, creator of BLTC and partner at Fabrica Oveja Negra, via a press release. “From its appearance to its flavor profile, this cigar is all about the darkness. The flavor profile is bold, rich, earthy, with notes of dried dark fruits and bitter cocoa. The retrohale brings the spice with white pepper, and cinnamon on the finish. Overall, this cigar is the perfect balance between strength and complexity.” The Memento Mori’s wrapper is very, very dark with a somewhat rustic appearance thanks to the bumps below the wrapper and the oily texture. Like many Black Label Trading Co. cigars, there’s a bit more going on than a normal cigar. This one features one of the unique tipped caps, a much firmer structure than a pigtail, along with a covered foot. The aroma from the wrapper has raisins over leather and some sweeter barnyard flavors. Despite the very dark color, I find the aroma to be around medium-plus with just those three notable aromas. The foot is muted compared to the wrapper with some subtle sweetness that reminds me of raisins and caramel. The cold draw is surprisingly open with lots of chocolate over leathers, a mineral earthy flavor and some sweeter pork-like meatiness. It’s more intense than the aromas, but I’d still only peg it at medium-plus.

All three cigars have an open draw—ranging from slightly open to open—and that makes the first puffs more complicated than they need to be. Flavor-wise, that very first puff reminds me of a terroir-like earthiness over some toastiness, mild amounts of spices and a woodiness that reminds me of breaking damp bark. The profile is medium-full, yet very aggressive. By the third puff of the first sample, I’m already concerned about the cigar going out. This seems to be mostly a result of the thick wrapper on the covered foot and it not fully igniting the filler. Taking an extra 20 seconds or so per cigar on the next two samples fixes that issue, but it doesn’t fix the burn issues. The first third requires touch-ups nearly every half-inch to keep the cigar lit, which isn’t something I’m enjoying. Flavor-wise, the cigar has a very toasty earthiness over black pepper and peanut shells. The more I can keep the cigar lit, the better that peanut flavor becomes, but doing so makes the cigar hotter, which intensifies the harsh parts of the black pepper. The finish is a mixture of toasty mineral flavors, a poultry-like meatiness and something that reminds me of aloe. Retrohales have toastiness, minerals, leather and some apple sweetness. Once the smoke leaves my nostrils, cinnamon and black pepper explode and seem to want to get even stronger, but then they sort of stop. Beyond that, there are some orange rinds. Flavor is full, body is medium-plus and strength is medium-full.

I think the second third is slightly better flavor-wise than the first third, but it’s still not good. The relights continue, which means flavors of black pepper, toastiness and dryness are a constant part of the profile. Beyond that, I get some earthiness, dry paper flavors and some white pepper. The finish is a drier version of toastiness, black pepper, earthiness, some apple sweetness and a familiar woodiness like I tasted during the cold draw. At times, there’s some creaminess, but it’s usually overwhelmed by black pepper and wood. Retrohales have aloe, dry toastiness and some black pepper. It finishes with black pepper, toastiness and surprisingly both a yogurt-like creaminess and saltiness once the burnt flavors fade out. The creaminess is an enjoyable enough addition that it makes me want to retrohale more, even if that means upping the intake of dry toastiness. Flavor is full, body is medium-full and strength is medium-plus. Even smoking at a substantially quicker pace doesn’t alleviate the burn issues, leading me to believe that it’s a combination of factors causing the issues. While the construction is definitely a major negative attribute, there are some decent parts. When the cigar is lit, the smoke production of the Memento Mori is impressive, but it rarely lasts longer than five or six minutes before it needs assistance from the lighter. 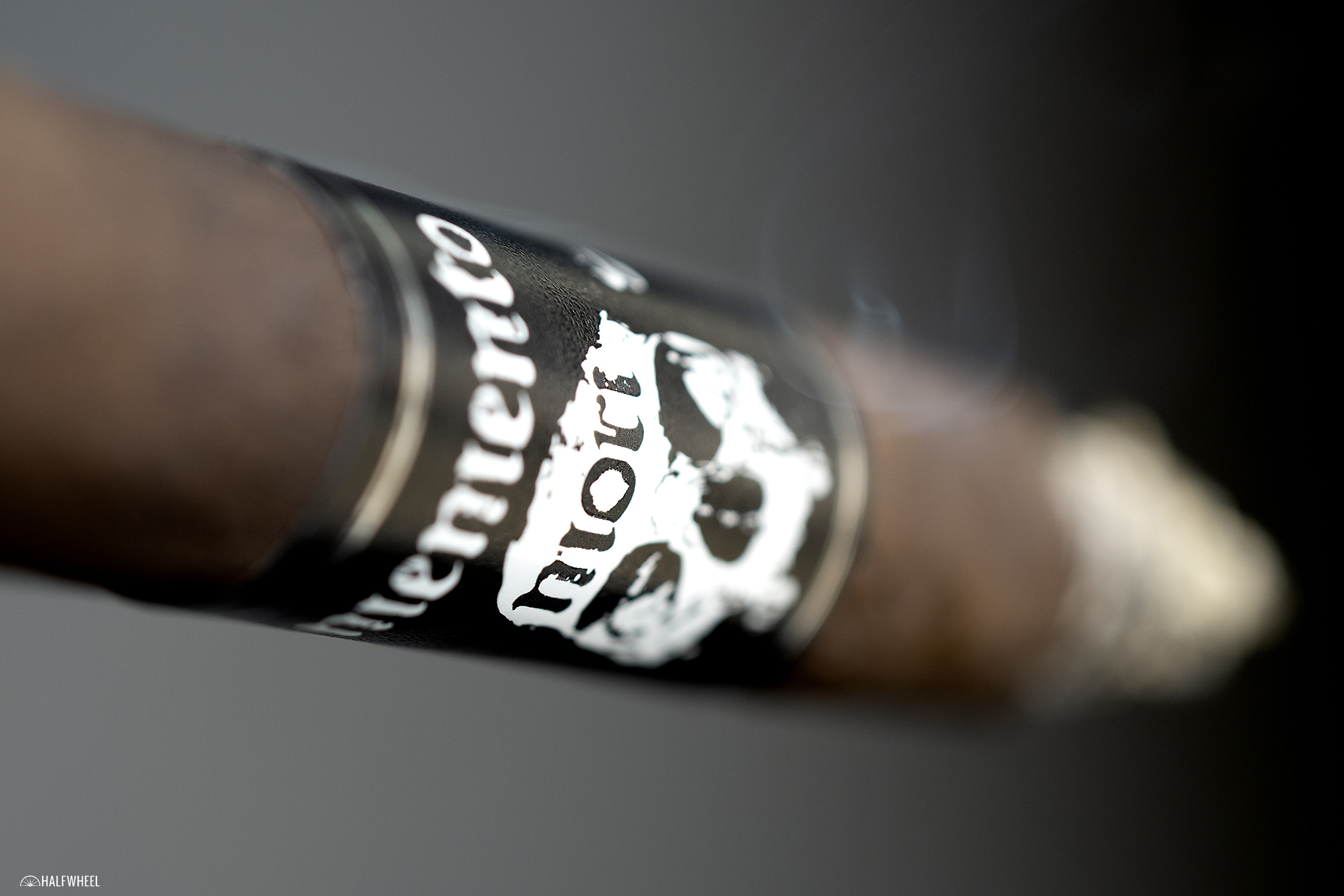 Flavor improves slightly compared to the second third. There are some puffs where saltiness and oak slightly edge out the toastiness and black pepper, though there are other puffs where the saltiness and oak are nowhere to be found. It’s tough to tell how much of this I’d taste on a completely fresh palate and how much of this is the result of an hour of the black pepper and dry toastiness dominating the cigar. Retrohales add a vibrant cinnamon to the profile, joining oak, saltiness, creaminess, black pepper and toastiness. Once again, the retrohale’s finish is my favorite part of the profile, this time due to a great oak flavor over black pepper and leather. Like before, the price to get there means tasting more dry toastiness. Flavor is medium-full, body is medium-plus and strength is somewhere between medium-plus and medium-full in terms of strength. I’m not sure precisely where things went wrong for the Memento Mori Corona, but I really hope there’s a remedy the next time this cigar gets released. If a cigar cannot draw or burn properly, there’s really not much point in discussing the flavor. Given the issues with the burn here, the flavor never stood a chance.