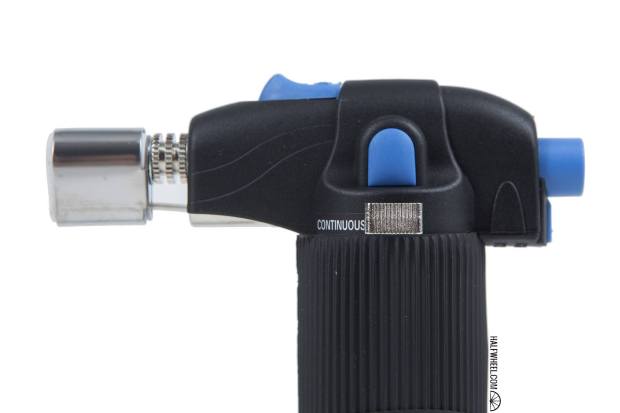 When you think of something to light your cigar with, the name BernzOmatic probably isn’t a brand that comes to mind, unless you were thinking of a lighter that would best be described as overkill. The hardware store staple is well-known for its big blue cans of propane and torch attachments favored by plumbers and others who find themselves doing welding work. 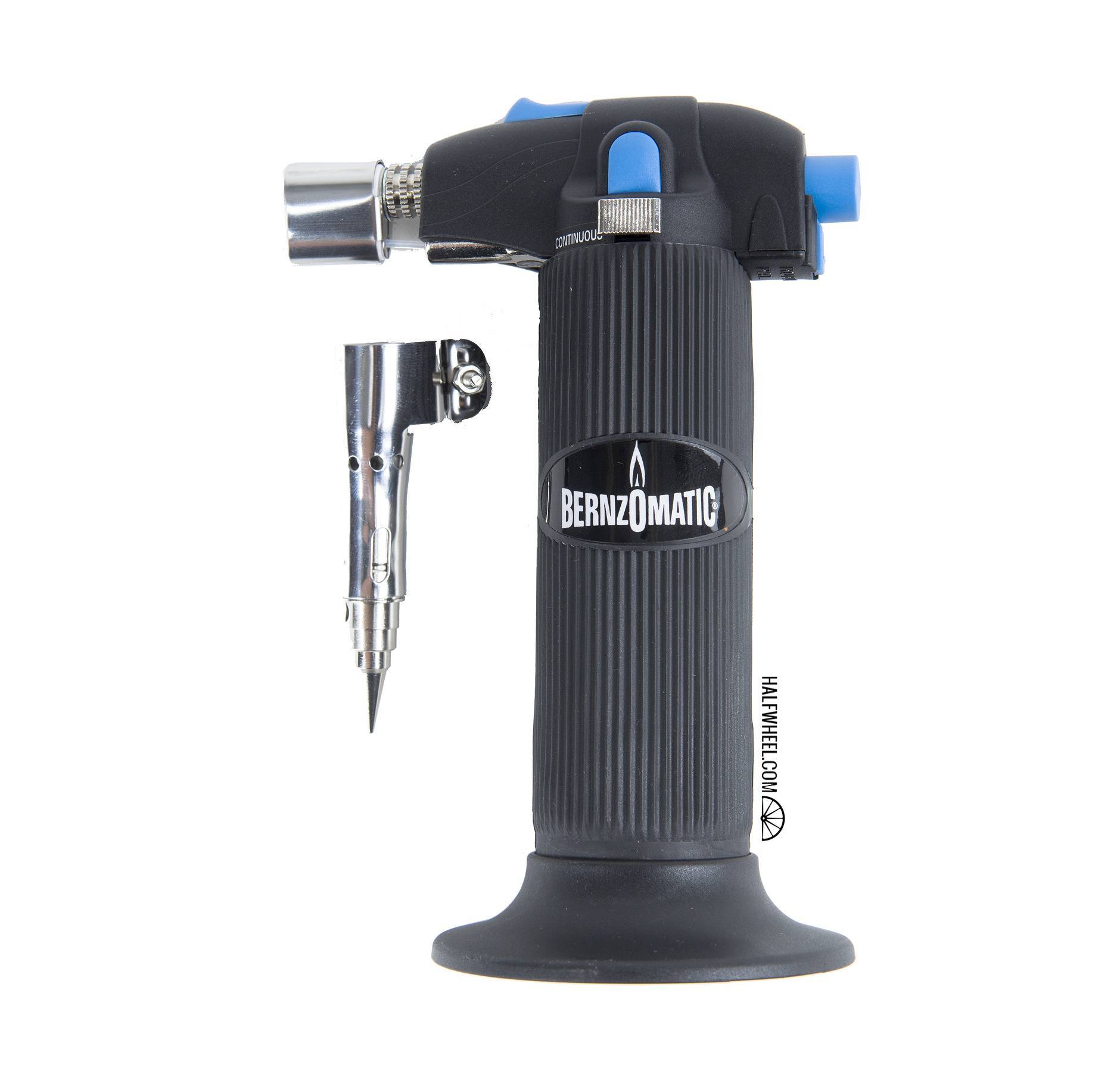 But the BernzOmatic line goes beyond those, including a number of smaller lighters such as the ST2200, a handheld device that while likely not intended for cigar use, can certainly tackle the job with ease. The lighter is billed as a three-in-one device as it features a micro torch as well as a soldering iron attachment that can be converted into a hot blower. While the ST2200’s versatility is good and certainly enhances its value and usefulness, for our purposes we’ll just focus on the torch component.

The ST2200 is a sizable unit, bigger than most units made for cigars that would get the tabletop description. It stands just under six inches in height while at its widest it’s about four inches, while the cylindrical tube fills the hand well without being overly heavy or unbalanced. Most of the ignition activity is done with your thumb and is pretty much one-handed, though you might need your other hand to engage the flame locking mechanism.

To fire the ST2200 up, you first pull down the safety lock under the ignition button, then give that mechanism a slight push to get the fuel flowing before depressing it all the way to light the flame. The idea is similar to that of focusing a camera: push the shutter button halfway to focus, then depress all the way to capture the image. 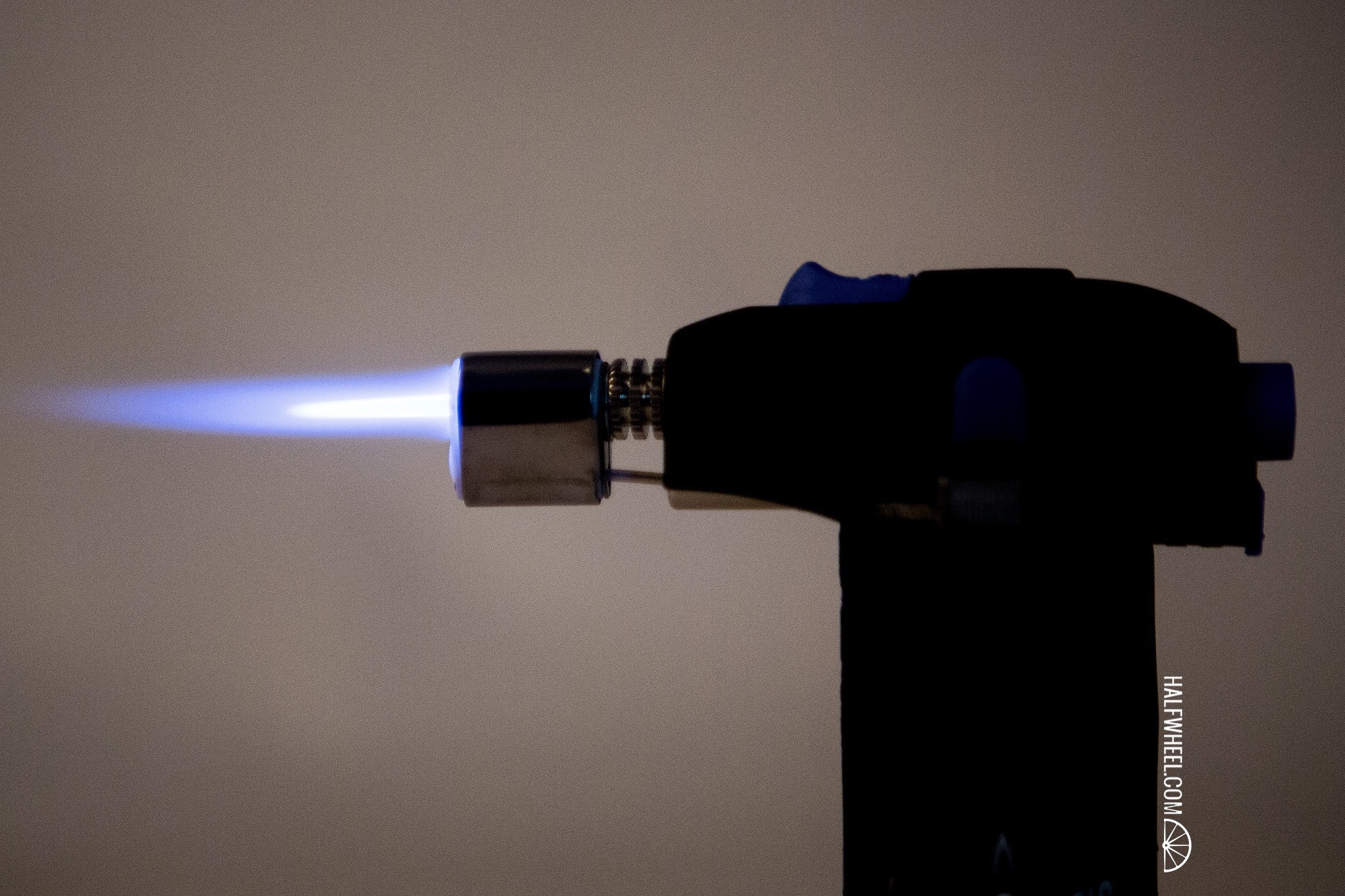 The unit defaults to what is described as a pencil flame, a sharp, focused flame that will be immediately familiar to users of single torch cigar lighters. The flame can be adjusted in two ways: from a pencil flame to a softer, candle style, as well as in its intensity.

For the latter, there is a small adjustment knob, again a familiar feature to users of most torch lighters. Roll it towards the front of the lighter for a bigger flame, backwards for a smaller one. The adjustment is certainly noticeable, but as with most torch lighters I think pretty much anything above the bare minimum to get the thing working is too much flame for a cigar. Again, we’re lighting decaying pieces of tobacco, not welding copper pipe, so I find a bit of restraint to be a good thing. Plus, it saves you fuel and keeps your cigar from becoming a charred mess. 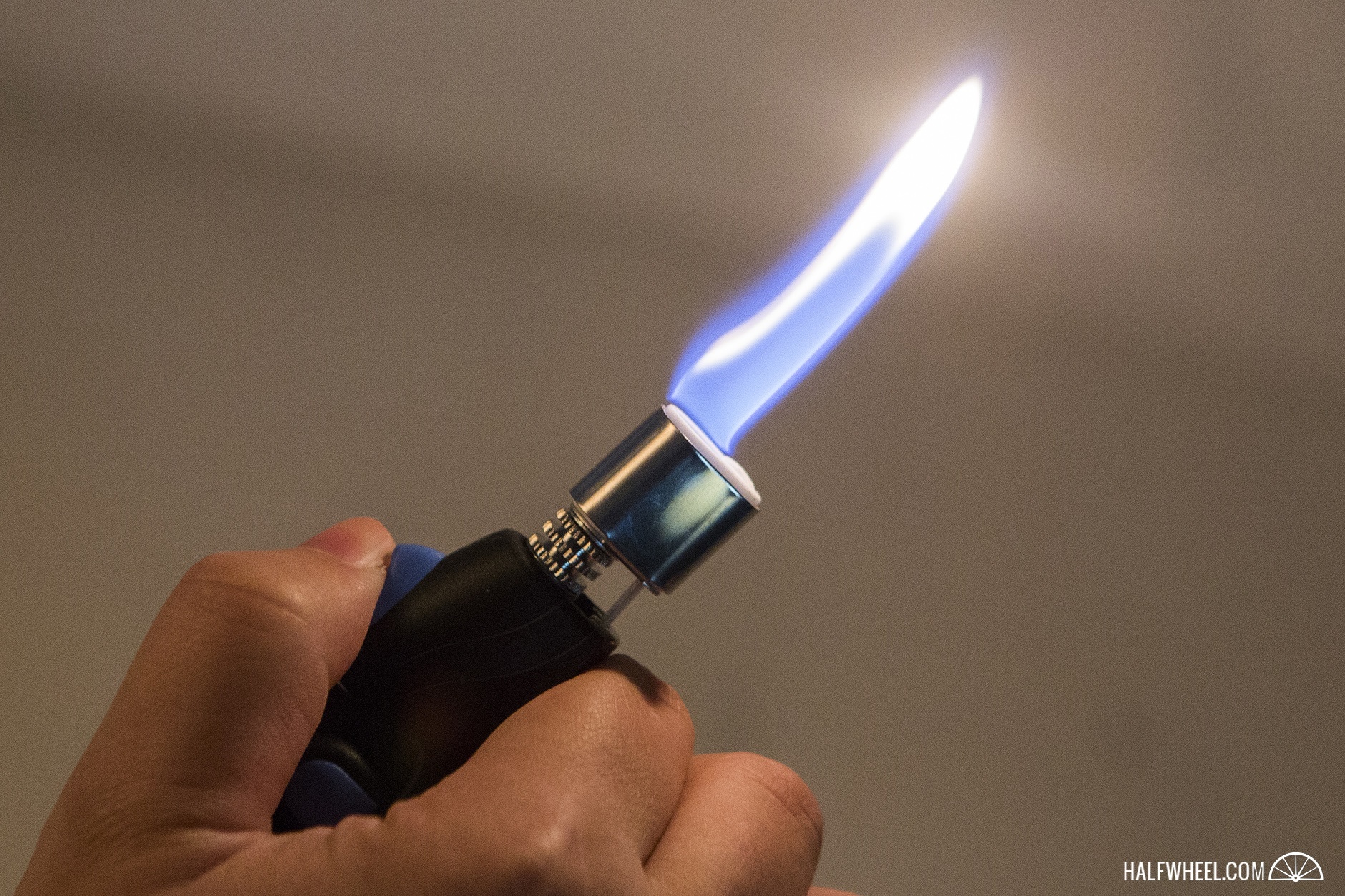 To change the pencil flame into a soft flame, there is a slider on the top of the unit that increases or decreases air flow and as such the style of the flame. Slide the piece of plastic forward, and voila, you have a soft flame. However, the ST2200 doesn’t allow for that slider to be locked into position, nor will the lighter ignite should you try and fire it up as a soft flame. While it’s functional, it is a bit awkward to position your hand in such a way as to keep the butane flowing and the soft flame slider engaged.

There is a locking mechanism that can be engaged for the flame, however, as once you have the button depressed and the flame going, there is a piece of metal that can be pushed into prevent the ignition button from returning to its closed position. I didn’t find myself using it that much to light my cigars as the ST2200 makes pretty quick work of it, but it is nice to have for other purposes or if you happen to find yourself with a particularly large cigar to light.

As is recommended for all cigar lighters, the ST2200 runs on butane, and while BernzOmatic offers its own line of the fuel, I found that the lighter had no issues with the XIKAR-branded butane I fed it. As you might imagine, the fuel tank on this unit is pretty sizable, and will certainly cut down on the number of times you need to refill it, perfect for a get-together of friends where a lot of cigars are getting lit and you don’t want to constantly be filling up the tank. While I didn’t use it to light every cigar I smoked in the last month or so, it did get the bulk of the work and it hasn’t needed to be refilled yet. To fill it up, simply flip the unit upside down to reveal the fill valve, line up your can of butane, depress for a few seconds and you’re done.

After a month or so of use, I’m certainly impressed by the ST2200, as it feels durable and has more than adequately done the one job I’ve asked of it. While I don’t weld, solder or have use for a heat gun, the added functionality of the unit is appreciated, and is certainly something worth considering if you do any of those things. Yes, there is at times a feeling of using too much flame to light my cigars, but I can’t say I’ve seen any adverse effects from it. While it’s no S.T. DuPont, it’s a fairly good looking unit with a solid black base that features a number of ridges for extra grip, and I have seen versions that have either red or blue highlights for the buttons and sliders. 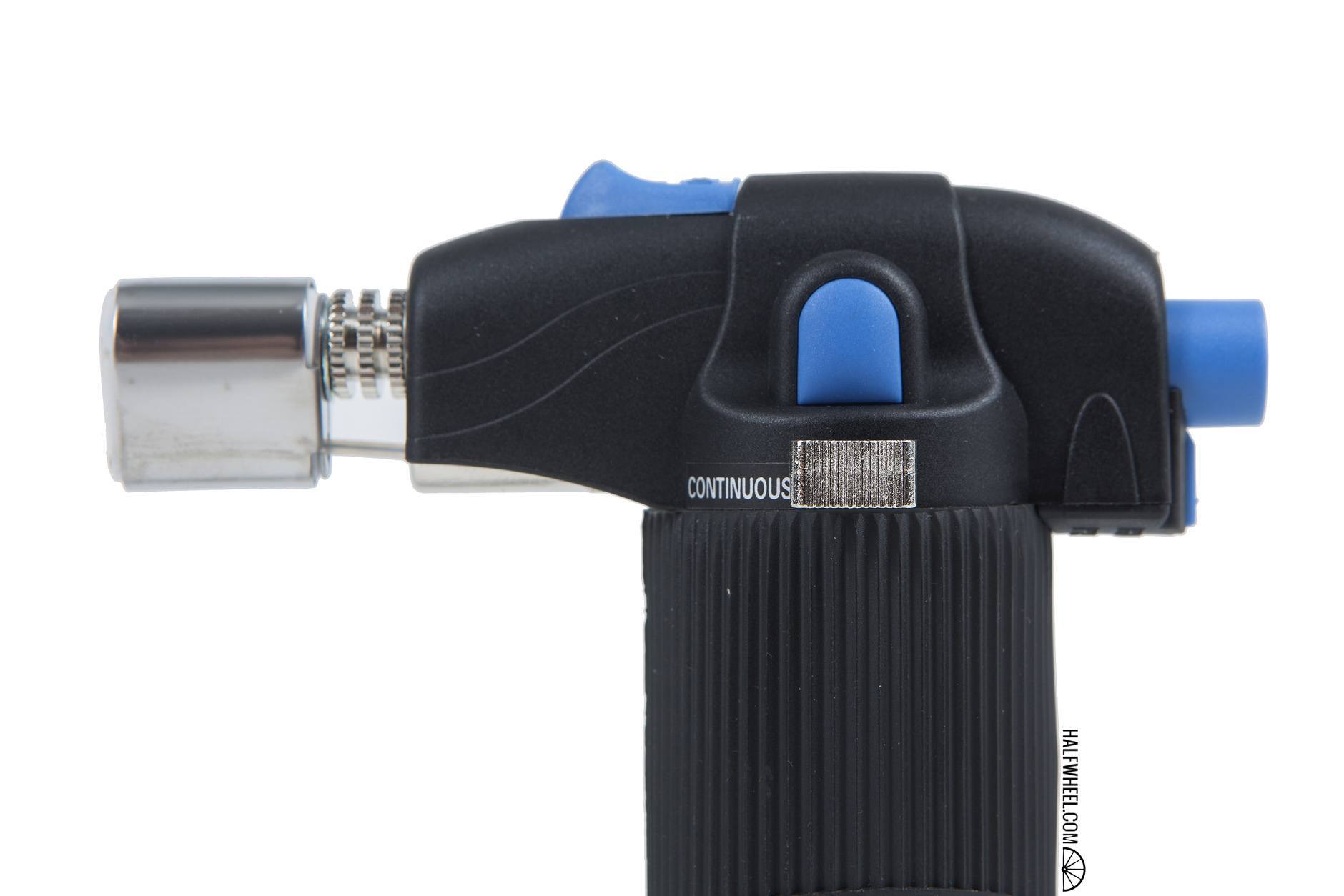 There are two things that I’m not crazy about with the BernzOmatic ST2200, one minor and the other a bit significant. First, the fuel needs a bit of priming before it will ignite, meaning you can’t just rush through the process of pushing the ignition button. You need to hold it down and let a bit of butane flow first, otherwise you’ll find yourself pressing the button and getting no flame, which can certainly be a slightly frustrating annoyance. The other issue I have with the lighter is about the adjustment to a soft flame. Personally, I tend to like a softer, candle-style flame for certain cigars, and while the ST2200 can deliver that, the slider on the top of the unit doesn’t lock in place, and the hand position needed to keep it engaged isn’t the most natural or comfortable. I’ve seen other units similar to the ST2200 that have a rotating collar that allow for different amounts of air flow to produce varying flame intensities, something I would have loved to see from this lighter.

The BernzOmatic ST2200 Micro Torch sells for about $30 and is widely available from hardware stores and a number of online retailers, including Amazon.com

, which puts it in a bit of a unique spot when it comes to other lighters on the market. Compared to traditional cigar torches from established manufacturers, its price puts it above a number of the more value-oriented options and into the lower tiers of branded lighters, meaning a single flame from XIKAR or Colibri in most cases. If you’re shopping purely on price alone, I suspect you’ll likely pass over this unit pretty quickly, especially if you don’t consider your local hardware store a cigar accessories shop.

But for what it is, the BernzOmatic ST2200 is a solid unit that I plan on keeping around for a while, and it will probably get the bulk of the work when it comes to lighting cigars at home. It’s not a very portable lighter, though I’d have no objection bringing it to a get-together, and I could see if being very useful for a retailer hosting an event where a lot of cigars need to be lit and time can’t be spent refilling the lighters. All in all, a decent option for torching up cigars that can also be used for that welding or soldering project you’ve been meaning to tackle—once you’re done with your cigar, of course.