For a company that has been around since 1904, Royal Agio Cigars isn’t the most well-known cigar company in the United States, but a recent partnership with one of the most high profile cigar brands might just change that.

Founded by Jacques Wintermans as A. Wintermans & Zonen in some 111 years ago, Royal Agio has evolved into one of the biggest cigar companies in Europe, responsible for producing the Balmora, Mohair’s De Huifkar and Panter lines, which collectively account for nearly 750 million cigars produced and sold per year across more than 100 countries. The company changed its name to Agio in 1950, growing its existing brands while acquiring Panter and Balmoral from Douwe Egberts in 1983 and opening a premium cigar factory in the Dominican Republic in 1990, which would be home to its premium cigar operations, including the Balmoral brand, which traces its roots back to 1895.

While the Balmoral brand comprises both short and long filler cigars, the company has pushed more towards the premium market in recent years, particularly through the Spring 2014 announcement that Drew Estate would be distributing the Panter, Mohari’s and Balmoral brands in the United States. 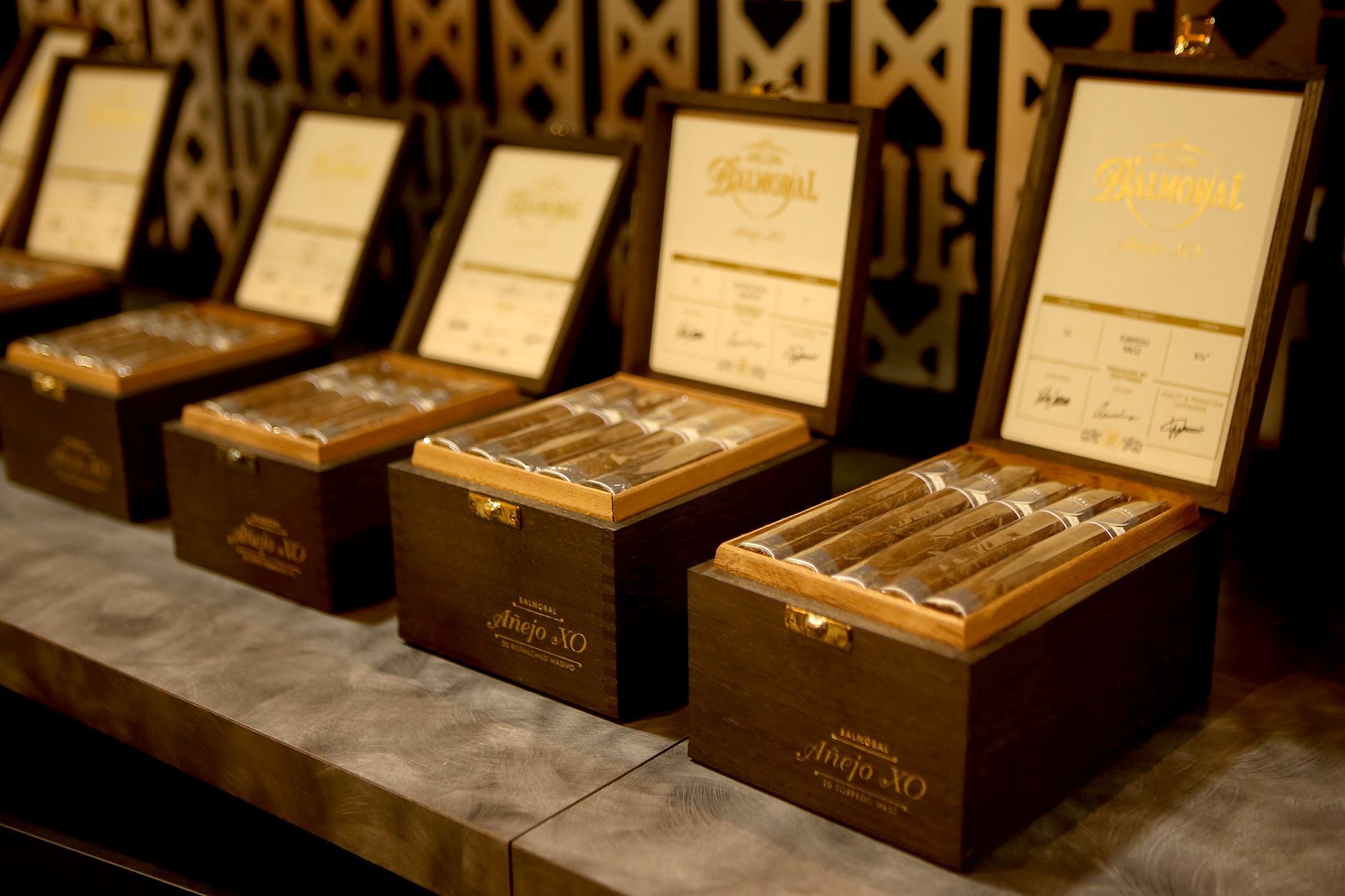 In July, the company announced its newest offering, a follow-up to the flagship Balmoral Añejo 18 called the Balmoral Añejo XO. Billed as being blended by Boris Wintermans with “exceptionally old” tobacco—hence the XO name—the cigar is highlighted by a Brazilian sun grown Arapiraca wrapper that sits on top of Dominican and Nicaraguan tobaccos, with a goal of creating a cigar that offers complexity and subtlety, while adding sweetness and creaminess that wasn’t found int he Añejo 18. The Balmoral Anejo XO Rothschild Masivo offers an oily greeting as it is removed from its packaging, and while the Arapiraca wrapper doesn’t appear to be gushing with oils, you couldn’t tell by simply feeling it. It’s a fairly mottled leaf with a slightly darker than medium shade as its main color, getting darker in a few spots. There are a few prominent veins, generally clean cuts on the wrapper and no apparently issues with the cap or roll, though a quick squeeze reveals that the cigar is a bit softer at the head than it is at the band and below. The thin sliver of ruby red on the bottom the primary band catches the eye almost immediately, bringing the gaze up towards the rest of the band before naturally heading towards the foot band, which also denotes the size of the cigar. With that slid off, the foot of the cigar offers two differing sensations: the first is a prominent barrel note, rich and soaked with a syrupy and slightly sweet spirit. It’s a heavy smell that calls the nose in, offering no pepper or spice but rather an near buttery texture. The other is a slightly herbal or minty note, bright and clean and certainly not what I had expected; I’m left feeling as if the bartender switched my drinks on me while I wasn’t looking. Air moves well on the cold draw, if anything a smidge easy, and offers another distinctive flavor: it’s cool and a touch rocky, with a subtle hint of mint in the background.

The first puffs of the Balmoral Anejo XO Rothschild Masivo are definitely more a neat spirit than a cocktail, leaning towards a lighter Japanese whisky but with a fuller mouth feel. There’s not much in the way of spice or pepper, but the cigar certainly seems to be delivering on its billing of being blended with exceptionally old tobaccos, as it is incredibly smooth and mellow but still offering a good amount of flavor, particularly some full bodied wood notes. Retrohales are a touch more pepper-laden, but nowhere near what you would expect from most off-the-shelf cigars. In the middle of the first third I find myself trying to pin down some of the flavors and find an easy wood note that shows some age as the lead offering. The cigar has performed well, burning evenly with good smoke production and a stacked, dark gray ash that holds on for over and inch. With that first clump of dark gray ash gone, the Balmoral Anejo XO picks up a bit more pepper both on the palate and in the nose, while the wood barrel note continues to be present if not dominant thanks to the addition of just a touch of sweetness. Having recently smoked a number of fuller-bodied cigars, the relative mellowness of the Balmoral in the first third has forced me to pay even closer attention to the cigar, which seems to intensify the subtle increase in the pepper as well as the other flavors I’m getting. The aroma is also notably sweet; I have a hard time placing where I’ve experienced the smell before but it is undeniable—there seems to be a bit of warm ham that’s been coated in Dr. Pepper prior to baking, but also with just a bit of char on it. The burn line begins to get a bit wonky heading towards the final third and requires a touch-up, but otherwise the cigar has burned very well. A final puff in the second third gives me something I hadn’t seen yet, a blowout of flaky ash that ends up in a number of undesired places. The burn rate has slowed noticeably heading into the final third, and I’m a bit surprised to see the burn issues that have come along, as there are spots in the wrapper that don’t want to combust as well as others. The flavor continues to pick up in terms of its vibrance, and I wouldn’t be guessing this was aged tobacco based on what it’s offering. The wood and barrel notes are still prevalent with a bit of char, while the pepper has ceded its dominance and now sits more in the background. In the final inches, the flavor stays medium in terms of intensity but will sneak up a bit as the heat becomes more of a factor, with a slightly charred wood note coming out as a result. There are no issues taking the cigar down to a tidy nub, as combustion remains strong and the flavors stay palatable. 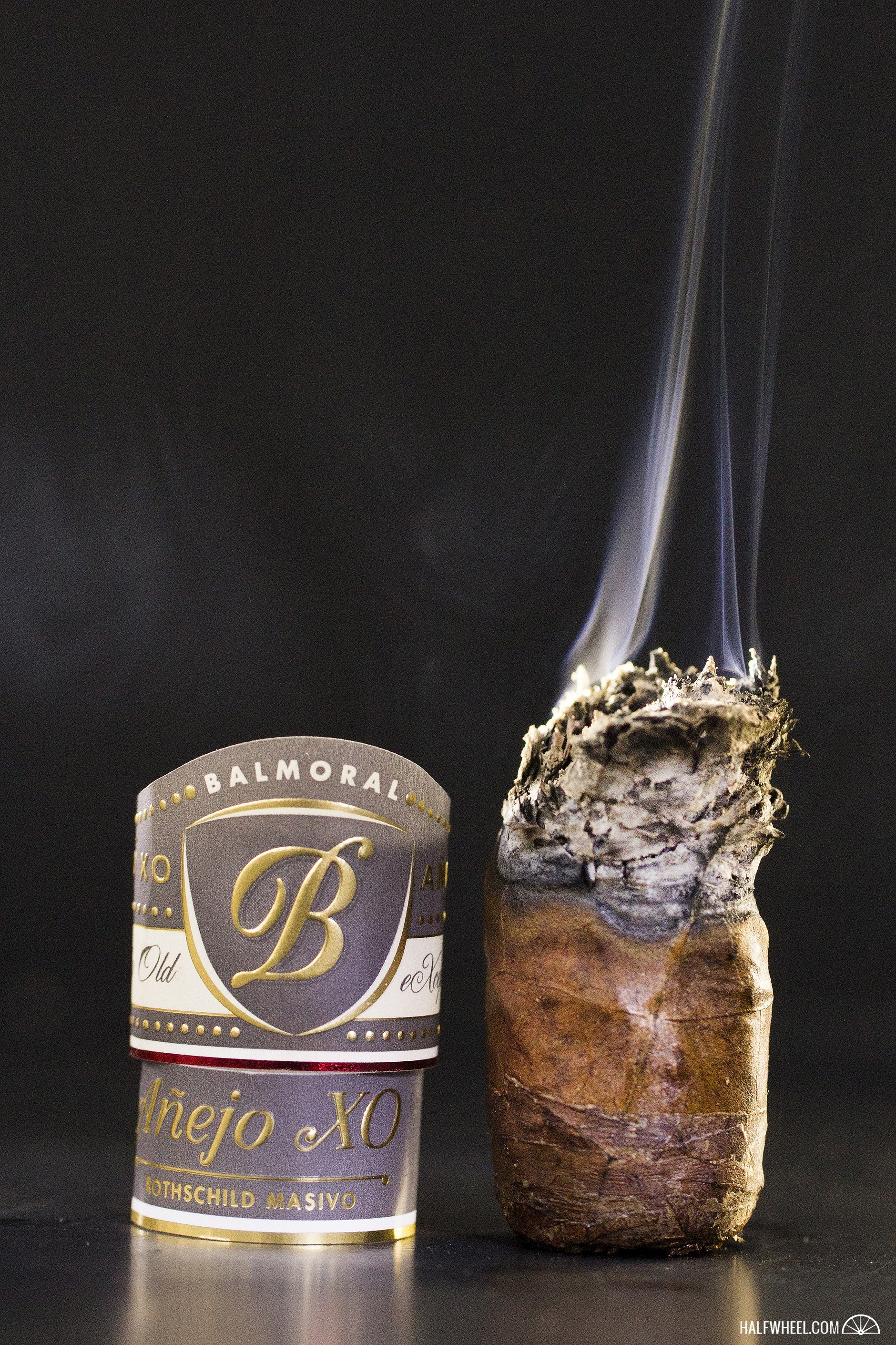 While I wouldn't doubt that the Balmoral Añejo XO uses some older tobaccos, it wasn't readily apparent, especially not after a fuller final third that tastes about as off the shelf as you would expect. Where the age does show most vividly is in the cigar's balance, which it never wavers from until the very end when the heat starts playing a role, and there are a handful of spots where the complexity and aroma show that the leaves have shed any semblance of youth and its associated harshness. For a brand without a ton of caché in the American marketplace, this is a solid second offering that is definitely worth trying should you come across it.