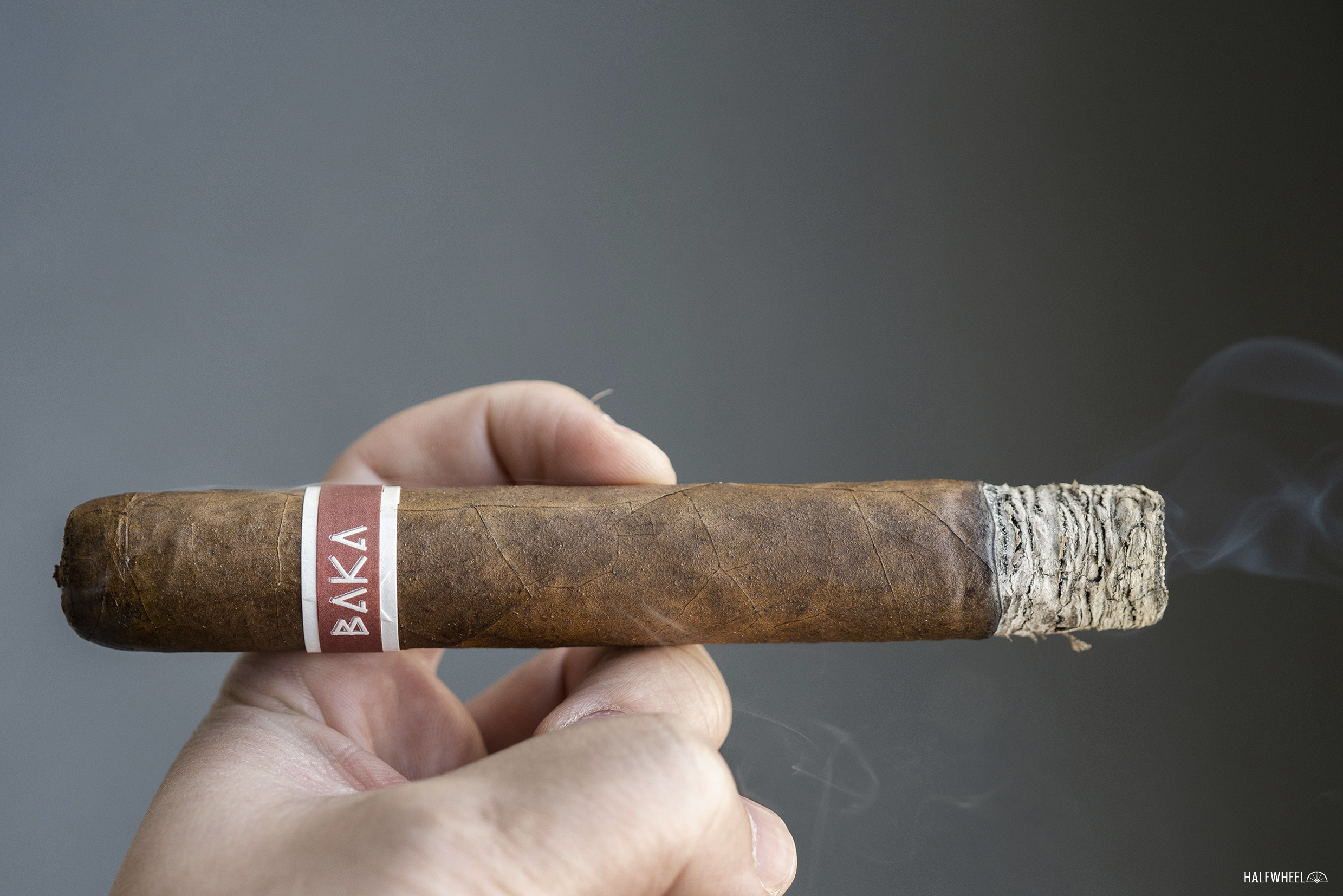 Given halfwheel’s approach of generally reviewing new cigars, you might wonder why I’m now reviewing a cigar that formally debuted two years ago. It’s a pretty easy explanation of a somewhat unusual approach. While RoMa Craft Tobac announced six vitolas, showed them off, announced pricing, etc.—it only shipped two of the seven vitolas. As announced at the time, the plan was to release two of the sizes in 2019 and then more of the vitolas in 2020. As with many plans related to 2020, some of that got derailed.

Baka is named after the Baka people who live in the western part of central Africa, specifically in countries that include Cameroon, the Central African Republic and Gabon. As such, it should be of no surprise that the wrapper used for the release is from Cameroon. The rest of the blend is not entirely disclosed, though Skip Martin, co-founder of RoMa Craft Tobac, previously told halfwheel that ligero from the Jamastran Valley in Honduras is part of the filler. Cameroon isn’t the prettiest wrapper in the world, but the Baka Gran Toro uses what I would describe as a cleaner version of the wrapper. The wrapper doesn’t have the reddish characteristic I see from some of the Fuente-made Cameroon cigars, but it is quite uniform in color. Aroma from the wrapper is medium in intensity with scents of barnyard and something that reminds me of foul meat. The foot is a bit stronger and a lot sweeter. There are aromas of graham crackers, a sweet barbecue sauce, white pepper and a sweet cinnamon scent. While it’s very much still summer here in Dallas—meaning the air is still humid—I still hear some unpleasant sounds when cutting the cigar. I can’t find any cracks and the cuts are clean, but it definitely isn’t a normal cigar cutting experience, only reinforcing my longstanding belief that there’s a time and a place to smoke Cameroon-wrapped cigars. Cold draws are medium-full, but the individual flavors are muted. Depending on the cigar, I can pick up vanilla ice cream, popcorn, floral flavors and something that reminds me of unseasoned French fries.

The Baka Hunter Gatherer starts with lots of meaty flavors over earthiness, popcorn and some leather. Around a half-inch into the second sample and the wrapper has come a bit undone towards the foot of the cigar. It doesn’t seem to be affecting anything, but it’s another reminder that Cameroon isn’t always a carefree cigar experience. Flavor-wise, the three cigars produce two different profiles. One is nuttier with lots of earthiness and meatiness, somewhat similar to the first puffs. The other two cigars venture pretty far away from that. Grapefruit, creaminess and straw make for a unique and decidedly different profile. The trio of flavors is accented by white pepper and perming. It finishes with grapefruit, bread, hot cocoa and touches of pepper. Retrohales have more lemon than grapefruit, but the citrus flavor remains a big part of the profile. In addition, the Baka’s retrohale has apple cider, straw and some bread flavors. Those retrohales finish with a distinct bread flavor that I’m never able to properly identify along with some creaminess. Flavor is medium-full, body is medium-plus and strength is medium. While the wrapper ends up coming undone on two cigars, it doesn’t seem to have any negative effects outside of the visual standpoint. The issues are towards the foot, meaning I’m not fighting with them when I go to take a puff, and the cigars just keep burning as if nothing is happening. Pretty early into the second third, I notice some white pepper on my lips. Flavor-wise, the Hunter Gatherer has more barnyard than before, joined by nuttiness, terroir and some underlying sugar-like sweetness, which produces a great contrast between the sweet and bitter. The finish has earthiness, creaminess, nuttiness, some herbal flavors, leather and a touch of white pepper. While the cigars are still a bit different up until this point, the retrohales seem to be more or less identical during the second third. I find floral flavors, French fries, earthiness, barnyard and some white pepper. They finish with a wasabi-like pepper, dank earthiness, some sugary sweetness and a bit of apple cider. Flavor is medium-full body is medium-full and strength is medium-full, though seems to be increasing. Construction remains excellent on one of the Bakas, though I need to make a touch-up to two of the three samples. That sugar sweetness picks up a bit in intensity in the final third. It’s not the strongest flavor in the Baka’s profile at this point, but it’s the easiest for me to identify. Earthiness takes the top spot, mixed with bread, oak, espresso and some black pepper. It finishes somewhat similar with oak, sugar sweetness, roasted meatiness, paprika and some strawberry sweetness. Retrohaling the Baka Hunter Gatherer produces a drier earthiness, leather, espresso and some sugar sweetness. My tastebuds don’t pick up that many changes after the smoke leaves my nostrils, there’s an added tortilla flavor along with an increase in white pepper. On one cigar, it seems a bit harsher than the rest of the profile, but the other two just have the white pepper. Flavor is medium-full, body is medium-full and strength is medium. Two of the cigars make it through the final third with no construction issues, one of the samples needs two touch-ups to help with the smoke production. The first Bakas I smoked were all the smaller 4 x 46 Pygmy size, and while I love to find shorter and smaller cigars that deliver the blend's profile in a shorter size, the Pygmy was not what I was hoping Baka to be. The good news is that the other Baka vitolas I've smoked since then have been more vibrant than the Pygmy. The Hunter Gatherer is what I was expecting from the line when it was announced: some of the classic Cameroon flavors mixed with the heavier tobaccos RoMa Craft is known to use, all paired with the great construction I've come to expect from the company. It's good, just smoke it before it gets too cold.