The AVO brand is celebrating its 30th anniversary this year, and that can only mean one thing: there will be some new cigars to smoke.

As part of the festivities, the company has announced that it is bringing back a pair of its most sought-after limited editions, the AVO 22 and AVO LE05. Also back, although as limited productions, are the AVO Maduro and AVO Signature, two lines discontinued in 2015 when Davidoff of Geneva USA trimmed the AVO portfolio in half as part of the brand’s overhaul.

In addition, it is debuting a new cigar, the AVO Improvisation 30 Years. It too is a limited edition, with just 2,400 boxes of 25 cigars being produced. 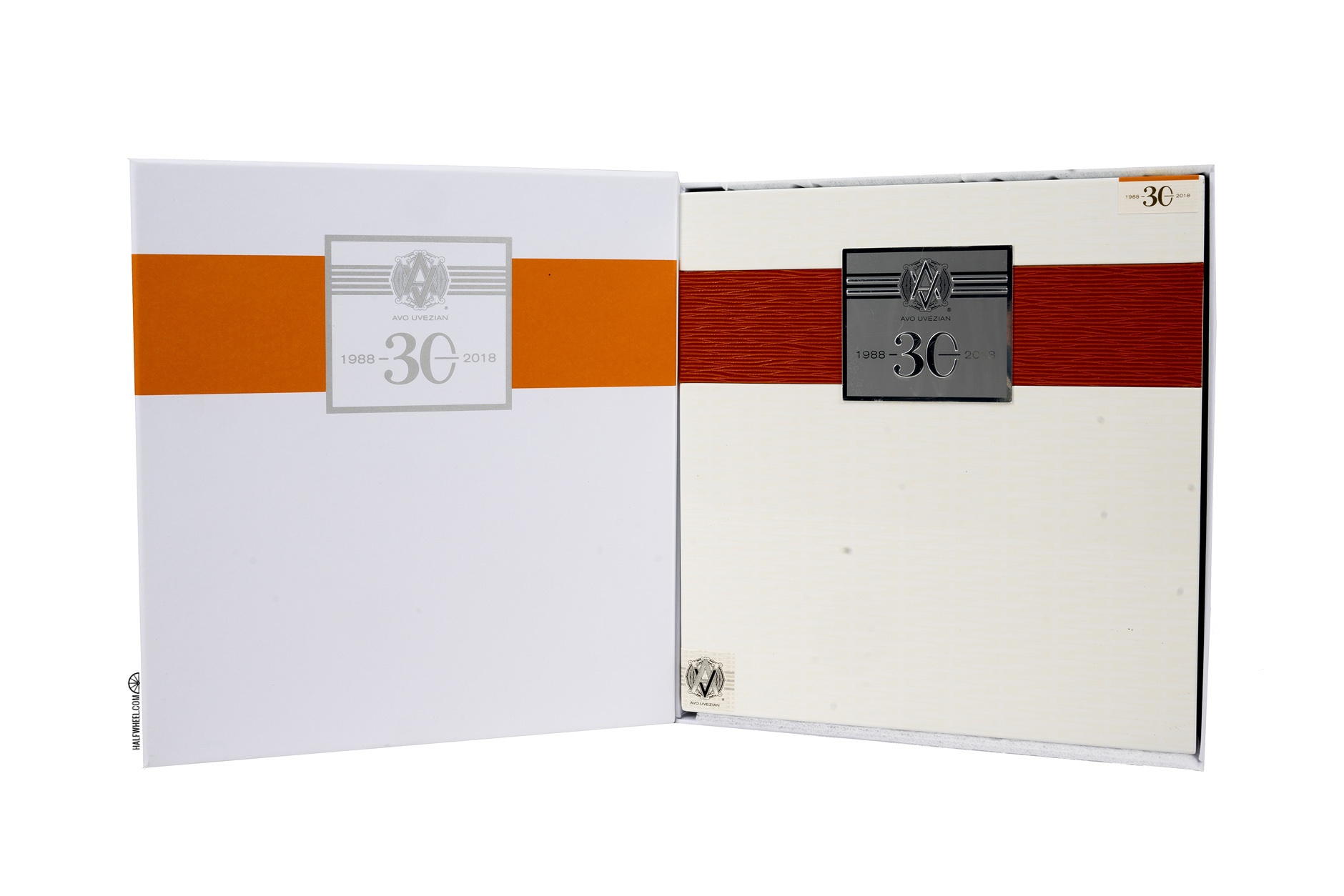 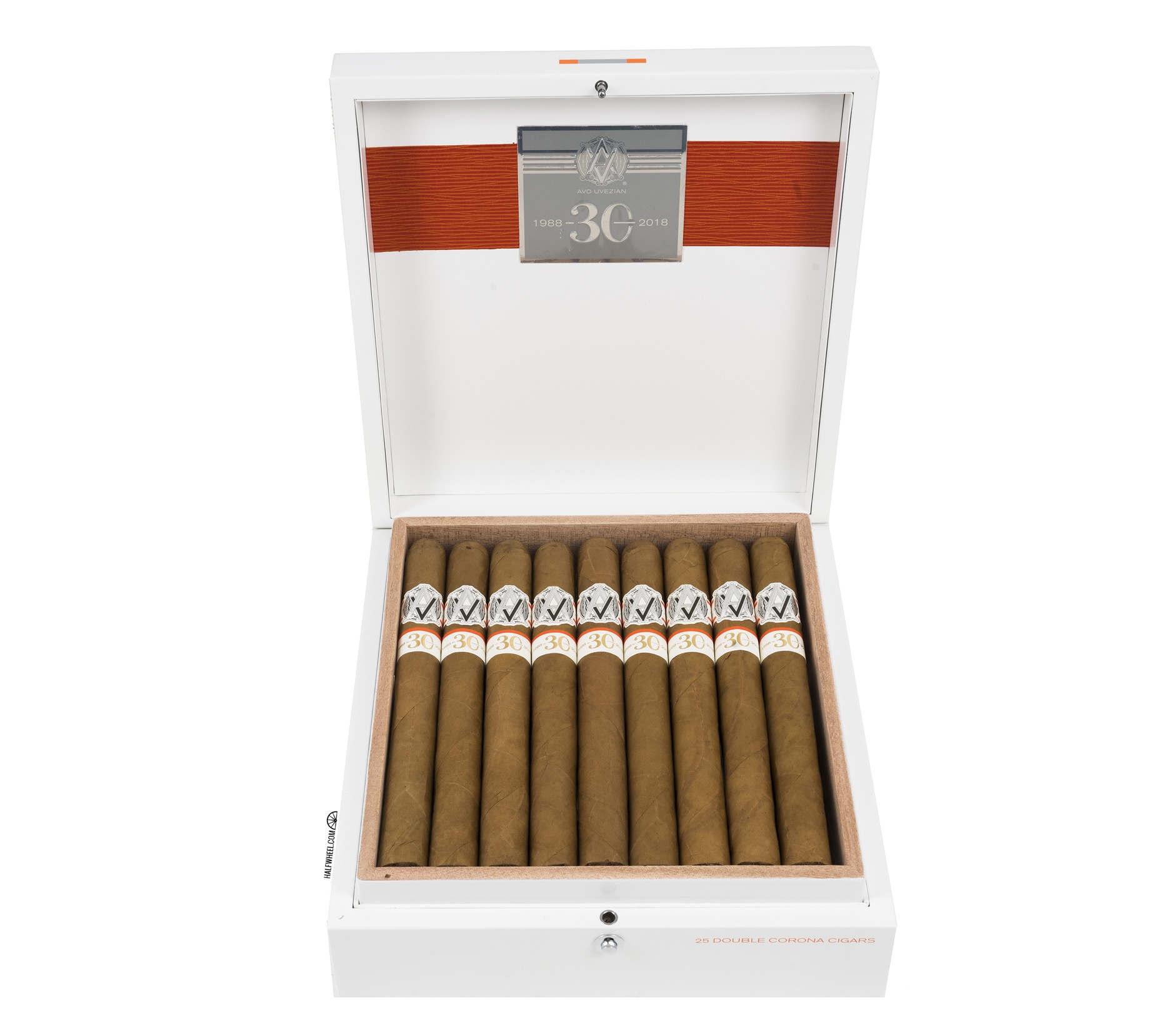 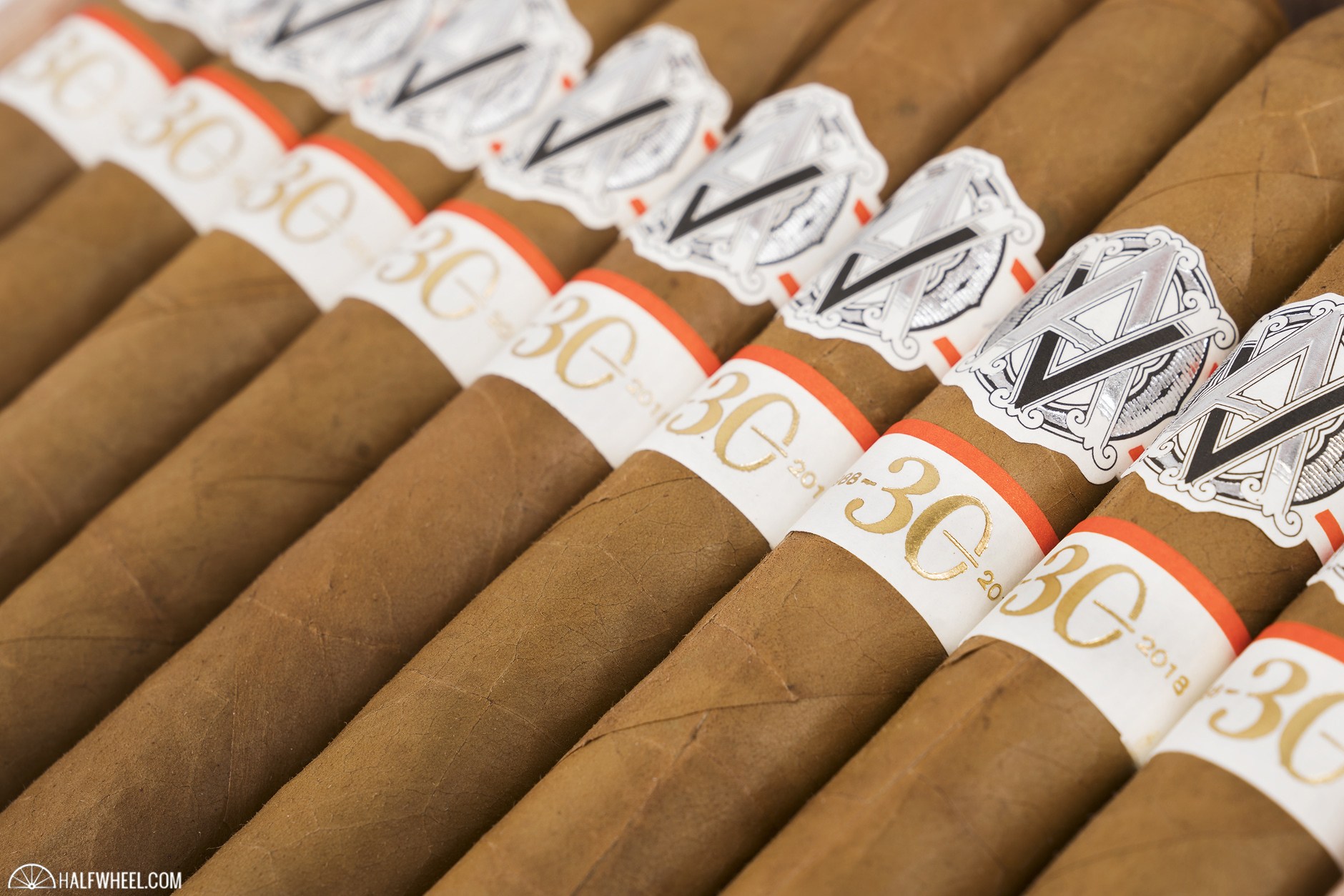 The AVO Improvisation 30 Years gets its inspiration from the AVO Classic No. 3, with Davidoff of Geneva USA calling it a twist on that cigar, with an Ecuadorian marron wrapper, Dominican binder and Dominican fillers, while the Classic uses a Connecticut shade wrapper over a Dominican binder and filler. Both cigars share a 7 1/2 x 50 vitola.

While the banding of the cigar looks fairly familiar for the AVO line, including the 30th anniversary secondary band that is being used on many of the releases, the box is where the cigar pays its true homage to Avo Uvezian, who passed away in March 2017. Each of the white boxes features a pattern designed to mimic the straw hat that became Uvezian’s signature accessory, with the orange stripe across the box a nod to the texture of the hat. 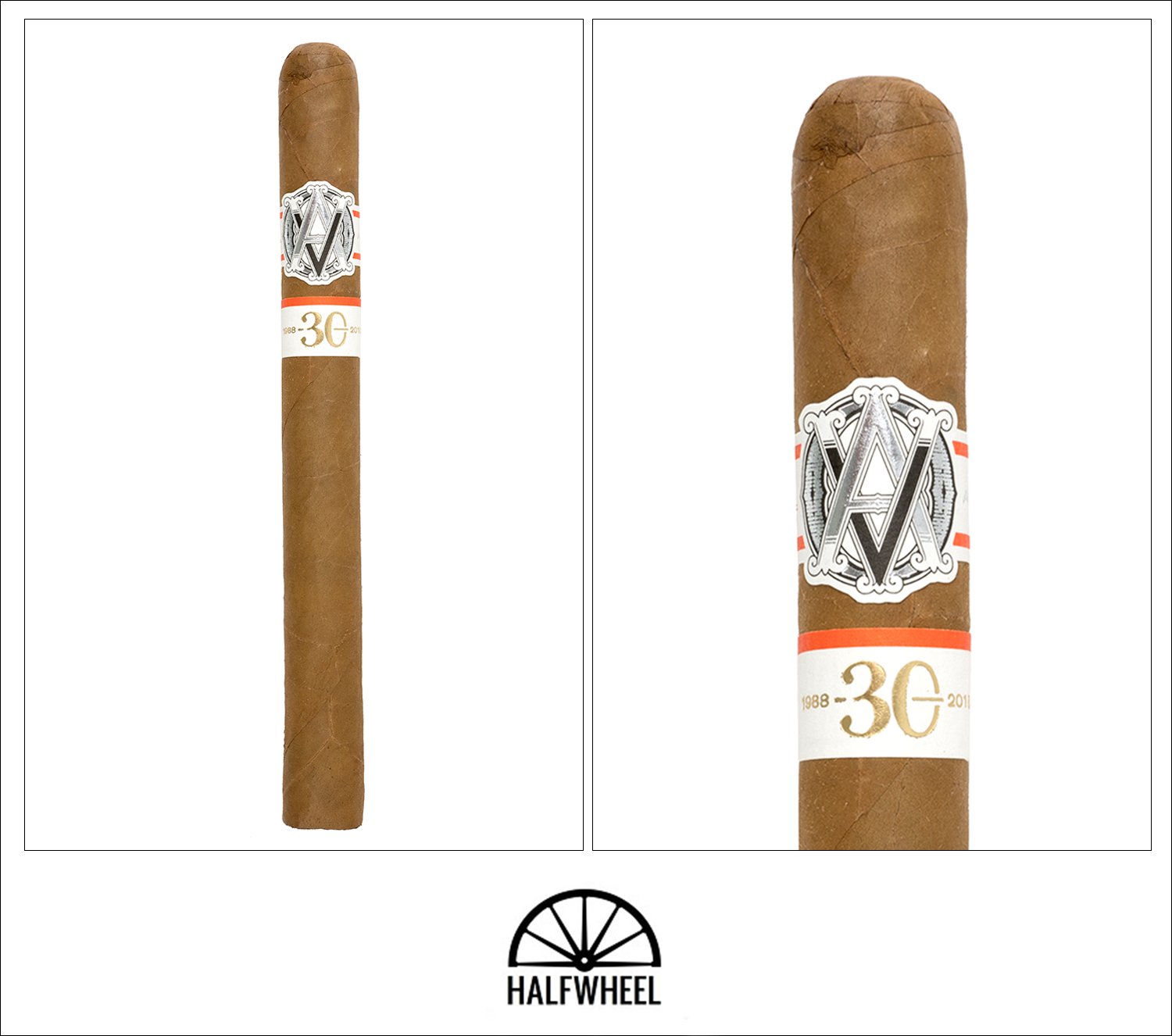 Even for someone such myself who is a fan of Churchills and double coronas, the AVO Improvisation 30 Years still looks like a lot of cigar given its 7 1/2 inch length. From a color perspective, the cigar is on the light side, with a light brown wrapper and bands that are a light cream color with accents of orange, gold and silver, with the black V the heaviest part of the look. While the top leaf doesn’t look like it has much oil to it, the fingers tell a different story as it is a soft, smooth and supple leaf that is far from dry. The veins on the leaf are fairly small and scattered, there is little in the way of tooth, and except when there’s some variance in each leaf’s color, the seams are nearly invisible. There’s a bit of consistent give to this AVO when squeezed, though it never looks or feels underfilled, and the caps are all well applied. The foot is light and bright, at first sniff showing the effervescence of Champagne, with thick white bread stepping up next before turning to notes of red apple, banana, and a touch of tangerine. The cold draw is a bit firm, which seems to make it easier to appreciate the air movement of the cigar’s length, while flavors are thick and doughy at first taste, with hardly any sweetness, spice or pepper to be found.

The AVO Improvisation 30 Years opens with an interesting flavor profile that is familiar but which I can’t say I’ve smoked a lot of recently, namely the Ecuadorian terroir that separates it from similar varietals grown in Connecticut, as well as some Dominican loaminess. The first puffs have a similar effect on my mouth as sourdough bread, though the profile here is far from sour. After shedding those flavors as well as some initial heaviness, the flavor morphs into a lighter profile as the first clump of ash drops, showing more of the Dominican binder and filler by way of cereal grains, lumber and creaminess. Black pepper makes its first appearance here by way of a retrohale, and once experiencing it through the nose, it seems to be more easily detectable on the tongue as well. The final puffs of the first third see a minor shift to more creaminess with white pepper now the primary agent of tingle, while the wood and cereal have fallen back into minor roles, the result of which is a rather refined and nuanced profile. Other than ash that drops off unprompted, there has been little to gripe about with the cigar thus far. It’s not long into the second third of the AVO Improvisation 30 Years that the cigar shows its complexity and balance, as some light white pepper adds a subtle kick to the now very creamy profile, with the palate getting just a bit of sweet cream. At the midpoint, the cigar pivots a bit, introducing some more black pepper into the mix, and while it’s not heavier either on the palate or through the nose, it does have noticeably more kick. From there the smoke gets toastier, occasionally treading into charred territory, though usually stopping just short. While the creamy texture is still there, most of the sweetness has dissipated, save for a touch in the nose where it has morphed into vanilla creamer. The technical performance continues to be solid all-around, with a smooth draw, even burn line, and plenty of smoke. 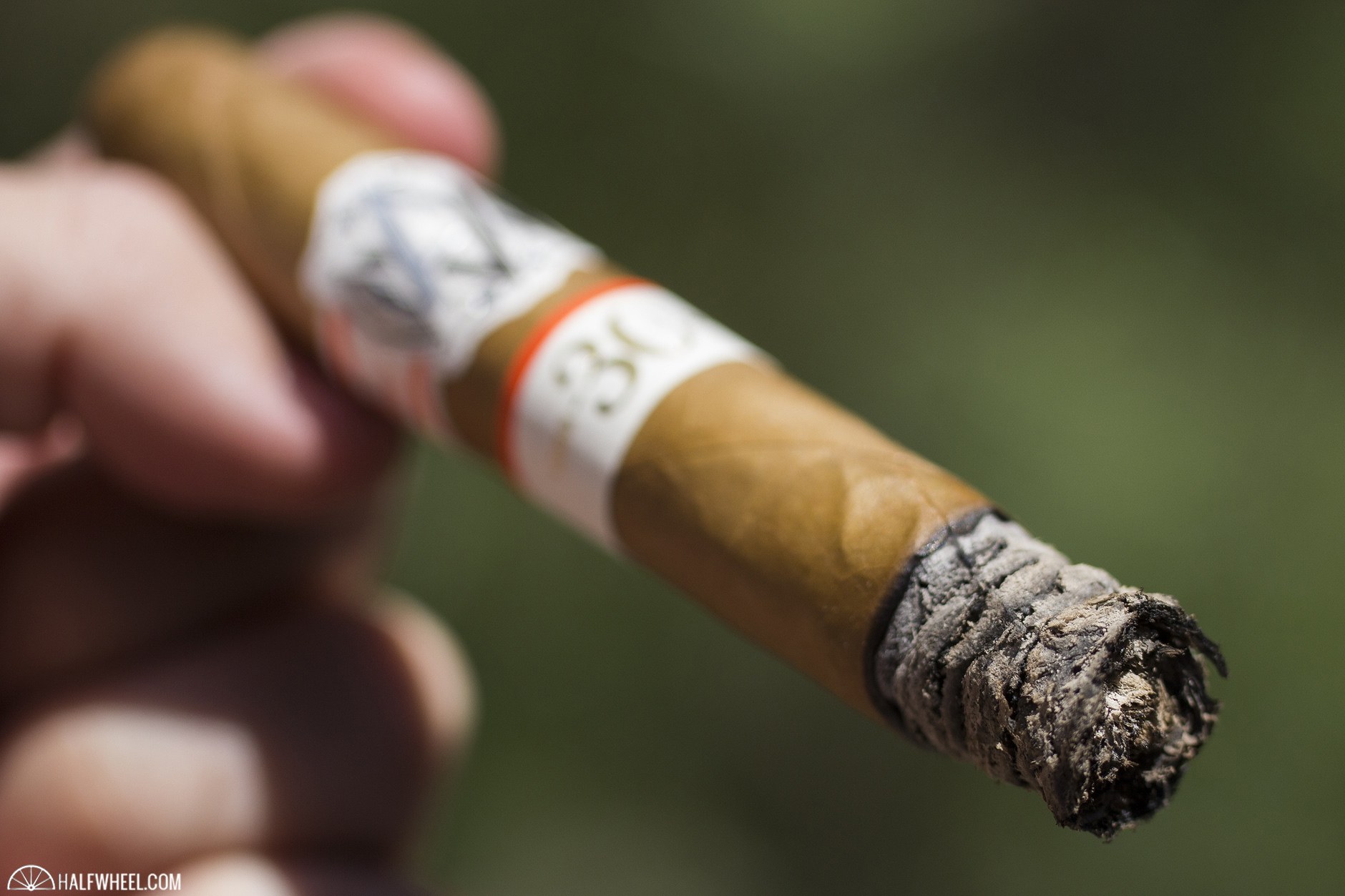 The final third starts on a much toastier note than the cigar has shown to this point, and with it comes a much drier profile that leaves my mouth wanting for a beverage as well as the majority of my tongue tingling with the table pepper and just a bit of saltiness. It’s a flavor that the cigar holds onto for much of this section, with each puff a reminder to slow down and minimize the increasingly heated flavors. The closing half of the final third sees the profile warm up and get charred and overly toasty, which doesn’t sit well in the back of the throat, and is further compounded by comparison to the fairly mild and creamy profile shown earlier. It’s by no means bad or unpalatable, though it’s far from the highest points the cigar showed earlier.