If you’re going to put out something with volume 1 in the name, you’d better be sure to put out at least a volume 2, which is exactly what the AVO brand did in September with the release of the limited edition AVO Classic Covers 2015 Volume 2.

This second installment is a 6 x 54 toro that follows up the April 2015 release of AVO Classic Covers 2015 Volume 1, with a new blend of an Ecuadorian 702 Marron wrapper, Mexican binder and fillers from the Dominican Republic and Nicaragua. Just 3,500 boxes of 16 cigars are being produced, the same as was made for Volume 1. Also new is the packaging, a circular box that is designed to look like a stack of records, with an accompanying retail display that looks like a box of records. The cigar is part of the revamped brand’s AVO Improvisation Series, a moniker that covers limited editions released since Davidoff of Geneva USA gave AVO a refresh in December 2014, a change that gave AVO cigars updated packaging, lower and protected price points, new branding and a thinning of the portfolio, all in an attempt to make it easier for consumers and retailers to understand just what the brand is about and has to offer. As a quick refresher, the AVO brand was created as the personal cigar of acclaimed pianist Avo Uvezian in the mid-1980s, who was said to be unsatisfied with the quality of a Cuban cigar he was having that at the urging of a friend, he began the quest to create his own line in the Dominican Republic. In the late 1980s, he met Henke Kelner of TABADOM, and the two began a relationship that resulted in the AVO brand, with Davidoff purchasing the rights to the name and distribution in 1995. At first glance of the AVO Classic Covers 2015 Volume 2, it’s easy to see the synergy in the colors of the wrapper and bands; the Ecuadorian 702 Morron wrapper has a deep brown shade with a slight copper tint to it that pairs well with the trim on the bands, as well as some spots that are complimentary to the black on the band. The cigar itself is a sizable stick, and while not the biggest in AVO’s portfolio, ranks bigger than the sizes I associate with the brand. The core is incredibly firm but there is a still just a bit of give, with a clean roll and seams that are just barely visible, save for one cigar where an interesting cut makes it stand out. With a lack of prominent veins or tooth, it’s a clean look and smooth texture in the hand, feeling a bit dry although the leaf doesn’t look it. The foot of the cigar offers a fairly unassuming pre-light aroma of wheat, cardboard and orange jelly, and what I think is a faint touch of brown sugar. The cold draw isn’t peppery but has a certain spice to it, something I can’t say I’ve tasted before, as the air moves through the cigar well and also offers a touch of cream, some wheat.

This sizable AVO puts off a good bit of smoke once lit, a medium-bodied profile that has a quickly building amount of pepper in the nose. It never gets out of control, but it’s easy to infer that it will be a part of the cigar’s profile for the foreseeable future. Leather and a slightly smoky flavor get introduced early as well and give the cigar a rich, layered profile that doesn’t necessarily sing on the palate, but rather serenades it with a sultry and somewhat heavy complexity. There is also a bit of barn wood that wants to make an appearance, though it is more suggestion that substance. While I wouldn’t call the cigar creamy, the smoke does have a certain creamy texture to it at times, smooth and puffy in the mouth at points, a welcome development to the plentiful amount being produced by the cigar. The first clump of ash drops off just shy of an inch, leaving a small pyramid of tobacco behind, while the burn line is fairly straight but does wander from time to time. Moving into the second third, there continues to be a slightly sneaky pepper that shows up in the nose; it’s not the dominant note and at times doesn’t even seem to be prominent enough to mention, but much like you can pick out certain subtle sounds in a piece of music, the pepper makes these appearances to get your attention and show a touch more complexity in the cigar. The AVO Classic Covers Volume 2 begins to show a bit of strength increase approaching the halfway mark, as the flavor becomes a bit more pointed with pepper and tangy wood. A bit of chalk enters the equation at the midpoint, which gives the cigar one of its first pronounced transitions and helps the flavor perk up on the tongue, while barn wood remains a constant since the start of the cigar, biting a bit more than it did earlier. The draw remains what one would expect from an AVO, with plentiful amounts of smoke and no relights needed. As much as I am looking and hoping for some flavor transitions, I’m not getting much if any heading into the final third of the AVO Classic Covers Vol. 2. That’s not to stay that there aren’t little adjustments here and there, but there isn’t much in the way of new flavors coming in or variances in the amount of spice or pepper. It’s a fairly linear progression from where it started, medium in body and strength, showing the occasional touch of nicotine in spots but not enough to be considered a knockdown cigar. The cigar finishes up not too far from where it started: not terribly peppery, flavorful notes of dry wood, a bit of spice, and hardly any sweetness except for a bit of orange that has flittered in and out for most of the cigar, with a bit manifesting in the aroma from the final wafts of smoke. There is also just a touch of harshness from the heat, but it’s pretty sporadic and not enough to worry about. 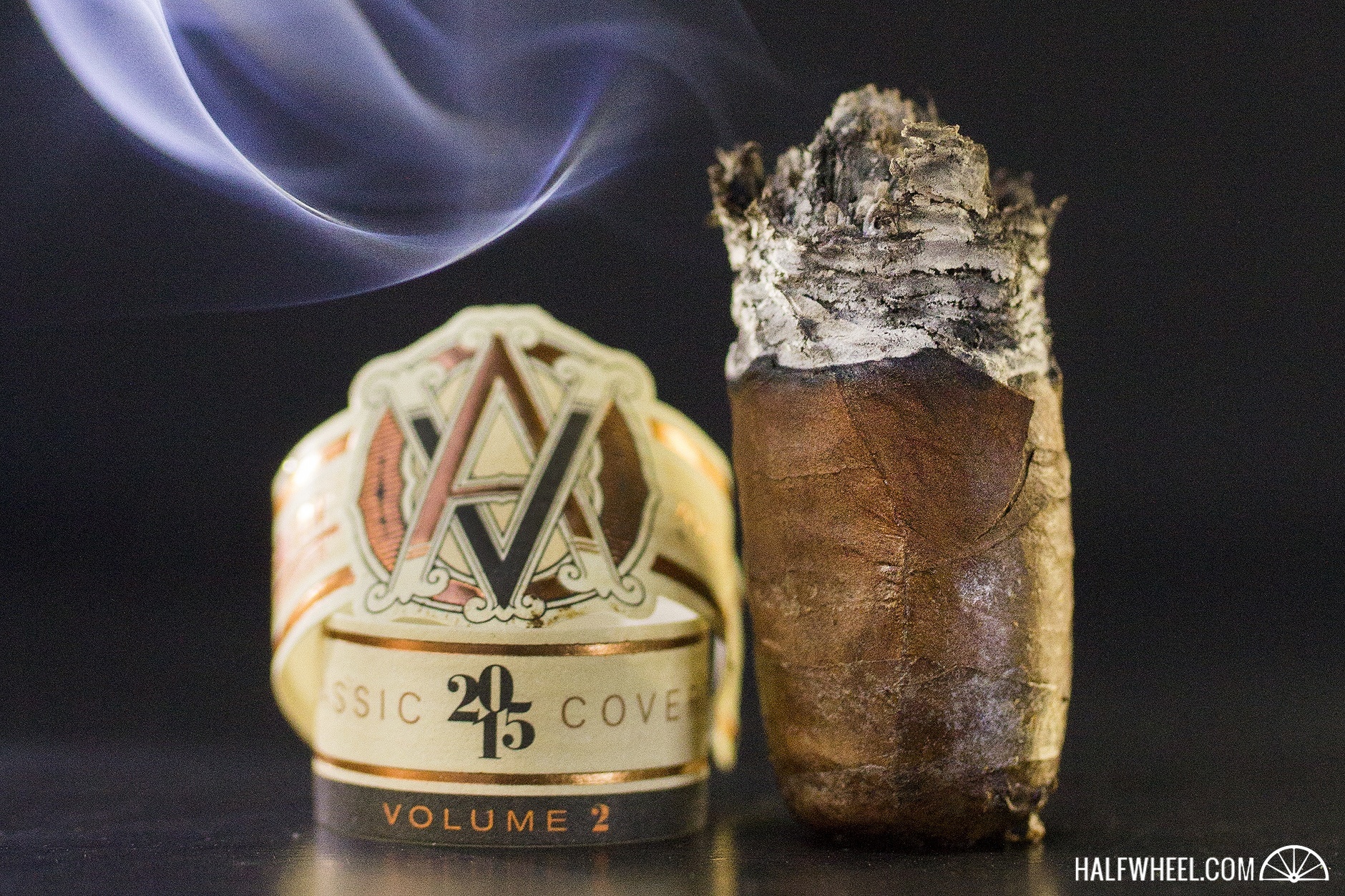 I hate to say this about the AVO Classic Covers 2015 Volume 2, but I like it. It’s a well-balanced, near perfectly constructed cigar with plenty of enjoyable flavors, measured strength and a packaging design that earns every bit of praise that can be heaped upon it. What I want to say is that I love it, but the flavor evolution and complexity just wasn’t there for me. It certainly tried at points, and it did nothing to turn me off from what it had to offer, but it never got the proverbial hook set and reeled me in. It’s certainly a stick worth trying if it fits your budget, profile and size preference, though I don’t think you’ll be too regretful if this ends up being one that got away.