Each spring, as cigar consumers in the U.S. begin to thaw out from the winter chill and are able to head back to their patios, decks and other outdoor spaces to enjoy a cigar, news begins to emerge about a handful of new and somewhat limited edition cigars that will be headed to the shelves of select retailers in the coming months. While they come from a small group of manufacturers, the cigars all share a common source: the Tobacconists’ Association of America (TAA) annual meeting.

In late March, it was announced that AVO would once again be offering a cigar made just for TAA members, an encore to last year’s AVO Movement. The AVO 2nd Movement used the same basic blend as 2013’s release but it was reported to have kicked the strength up a bit, though for unspecified reasons.

The AVO 2nd Movement became one of eight cigars released at the 2014 meeting exclusively for TAA members:

Additionally, it became a follow-up to 2013’s AVO Movement, the first AVO release created for the TAA. That 6 x 52 box-pressed toro was the first non-round cigar the company had made and was limited to 50,000 cigars produced. The blend could be described as typical for AVO as it used an Ecuadorian wrapper and Dominican fillers. 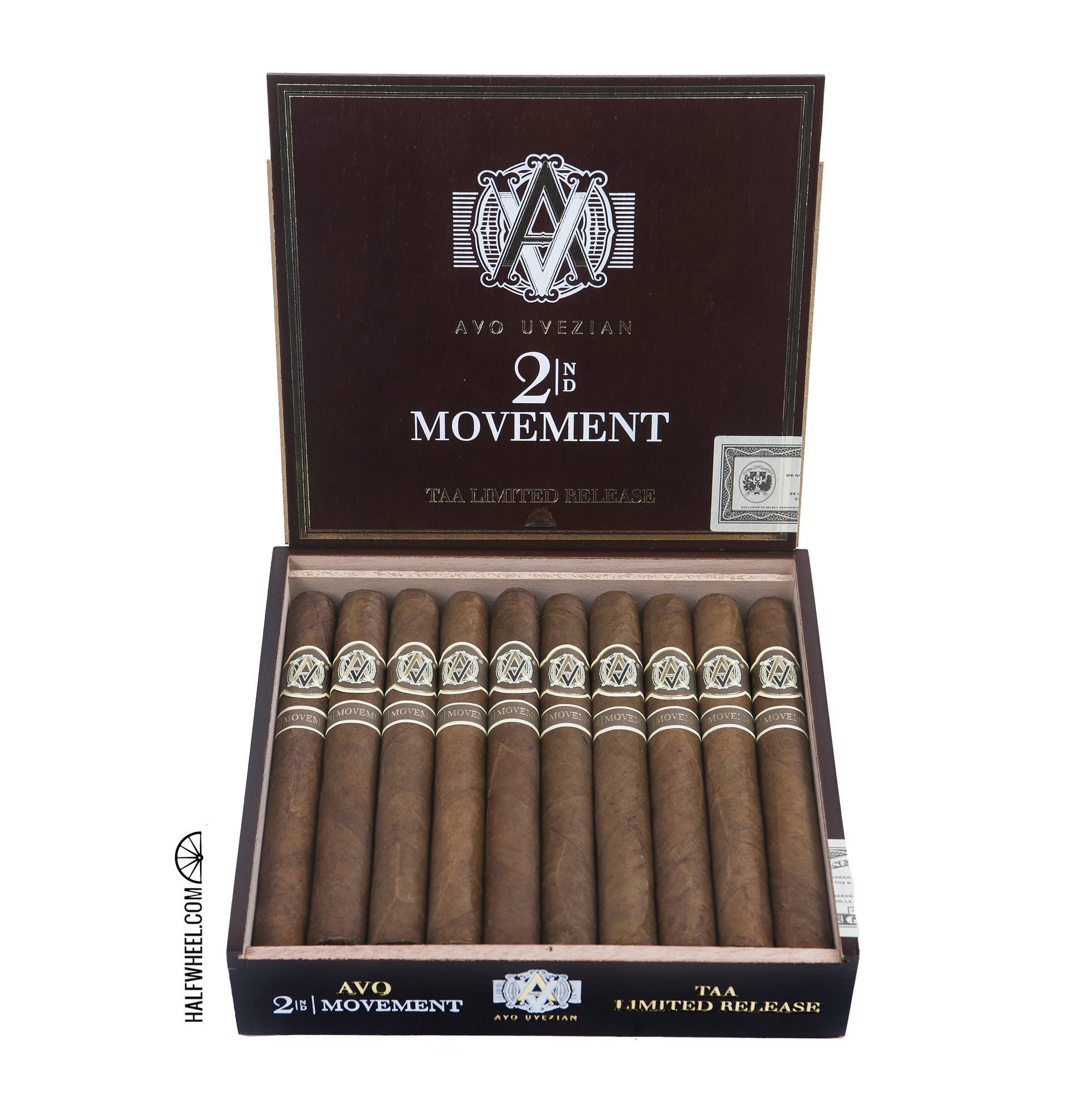 This second release keeps the same blend components as last year’s release, but changes in the specifics promised to delivera more full-bodied experience than the original offered. Production also dropped to 30,000 cigars. My first impression of the AVO 2nd Movement was that it seemed very soft to the touch; not so much the wrapper but how it felt when squeezed as it showed a surprising amount of give. This was something only found on the first cigar I smoked as the other two felt filled to a more standard level of firmness, but it was certainly an interesting first encounter. The wrapper is mottled with a matte dry earth color, though it’s not void of oils, as you can feel them fairly readily on your fingers and they provide a bit of slickness to the wrapper that is already fairly smooth thanks to small veins and little tooth. The size seems to work well, a bit more slender than a toro and three-quarters of an inch shorter than a standard Churchill give it plenty of presence but with a slightly more compact profile than either of those two vitolas tend to produce. The pre-light aroma is mild and neutral, showing some pepper only when after a few intense sniffs in search of it, though the final cigar I smoked also added a touch of simple sweetness that was a pleasant surprise. The cold draw is very open on one cigar and more dialed in the others, both with notes of wheat cracker, some pepper, tobacco and leather.

Despite a loose cold draw, the first puffs don’t come across as overly easy and offer a good amount of strength, delivering on the billing that this is a stronger offering than the original AVO Movement from 2013. It’s an interesting complexity between the Ecuadorian wrapper and Dominican binder and filler as both seem to be offering to the initial complexity, showing a good bit of vibrant pepperiness with an underlying note of dry wood furthering the mouth tingle along before a touch of a light and dry coffee note comes along. An early retrohale also shows a good amount of pepper but it is wrapped in a creamy and smooth smoke that buffers the pepper from coming into a more direct level of contact with the olfactory nerves. With the first bit of ash gone, the AVO 2nd Movement begins to show a bit of nuttiness with a light touch of salt, though doesn’t shed the pepper note in the least, with it even becoming more prominent at times. The creaminess of the smoke also develops wonderfully, at times taking on a bit of a condensed milk note before shifting into a thicker almond milk note that is both unique and delightful on the palate. The flavor has begun to develop into more a grain note, and while it has me thinking cereal, it has me narrowing it down to a stronger and more organic taste than the more commercial and processed cereal note. The flavor is still dry with touches of light wood, leather and white pepper, and the creaminess that had me raving not that long ago is slowly departing from the equation. While the AVO 2nd Movement hasn’t lacked smoke production to this point, it adds even more in advance of its second half; a thick, off-white cloud that I wish wasn’t getting blown away by the fan I have set up in an attempt to stay cool. The midway point sees an uptick in the strength of the pepper as well as a shift in the flavor that offers more of a black pepper note that again furthers the notion that this is a stronger version of last year’s AVO Movement. The burn line has generally been okay and technical performance is acceptable, though I looked at the foot of the first cigar immediately after a clump of ash fell off and it showed signs of being slightly underfilled, or at least that there was an uneven burn happening underneath the wrapper. The smoke remains thick and starts to regain its previously creamy note heading into the final third while retrohales remain fairly peppery. There isn’t a pronounced transition into the final third of the AVO 2nd Movement, and almost before I know it the bands need to come off lest they get overrun by the burn line. With all the transitions and upticks in strength found in the second third of the cigar, a bit of a respite is needed, which is graciously provided for a few puffs as the pepper diminishes and the milder base notes of grains, nuts, wood and leather are revealed. It’s not long though before the pepper returns and the wood becomes a bit damper and more pronounced, coming up out of the background notes for the final two inches. There is a touch of harshness emerging from the pepper, or at least it becomes heaped on at points and gets just is a bit too much for my tolerance, which ends up being the flurry of strength that brings the AVO 2nd Movement to a close. As the saying goes, you can have too much of a good thing, which appears to be the case of the AVO 2nd Movement. The promise of a full-bodied flavor profile ended up costing this cigar points, as while the pepper was enjoyable at times, it too often dominated the flavor and overshadowed the rich, creamy and buttery notes that I was expecting from my experience with the AVO Movement, as well as any appreciable sweetness and subtlety that this tobacco might have offered. Add in fairly consistent burn issues that frustrated the smoking experience and it confirmed that this sequel falls short of the bar set by the original.