Appropriately named Seven, the new blend debuted in two different sizes, including a 7 x 70 and the 11/18 vitola measuring 6 1/4 x 52/60 that was made popular by the Eiroa family when it owned the Camacho brand. There have been a number of different cigars from different released recently in the 11/18 shape, including the Camacho Diploma Special Selection 11/18 and the Eiroa Jamastran, the latter of which took home the 11th spot in halfwheel’s Top 25 awards last year.

Blend-wise, the Seven is made up of a Nicaraguan wrapper covering internal binder and filler tobaccos hailing from Honduras. According to Asylum, this release is the first time that the company has combined tobaccos from the two aforementioned countries into one cigar. 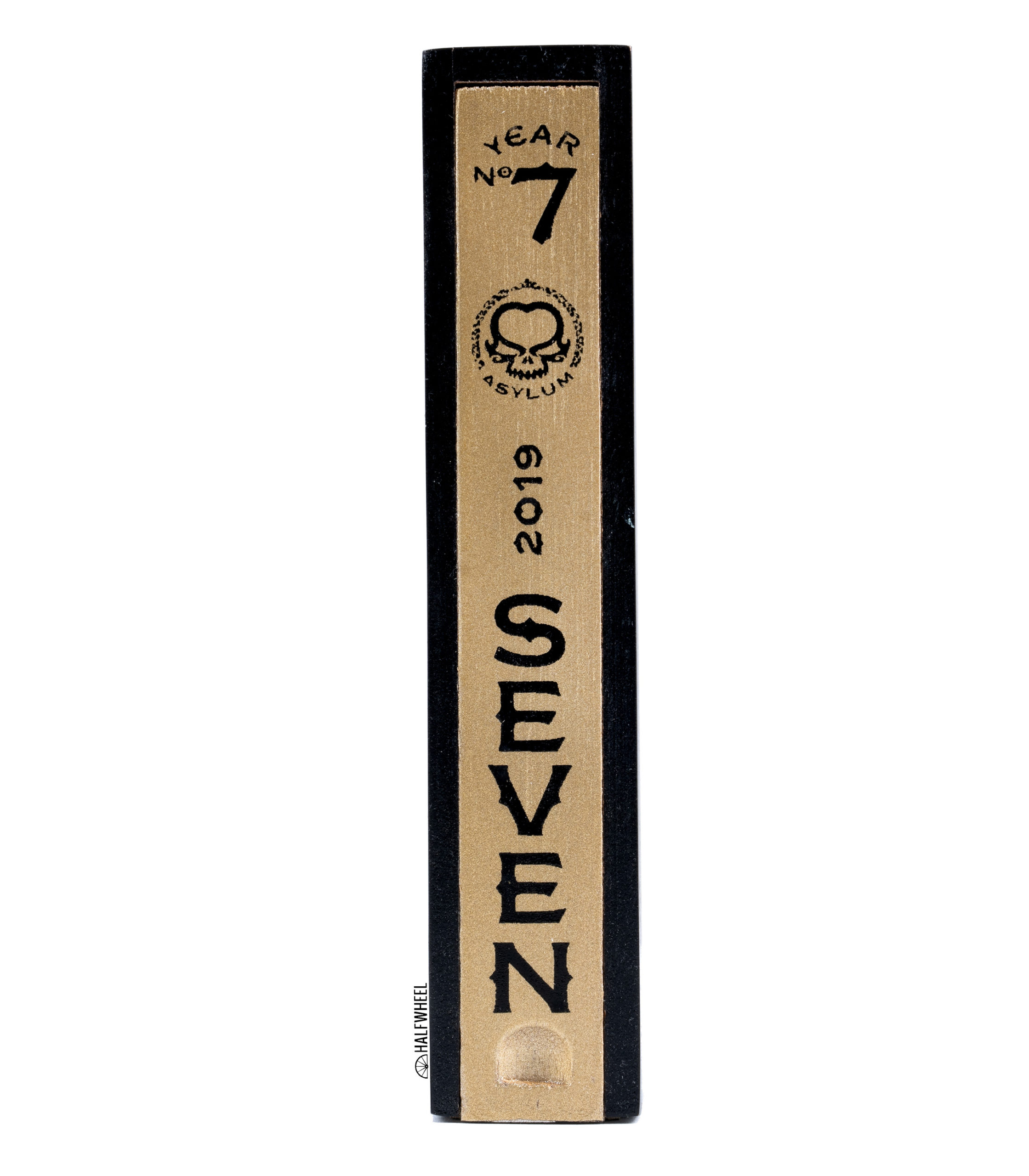 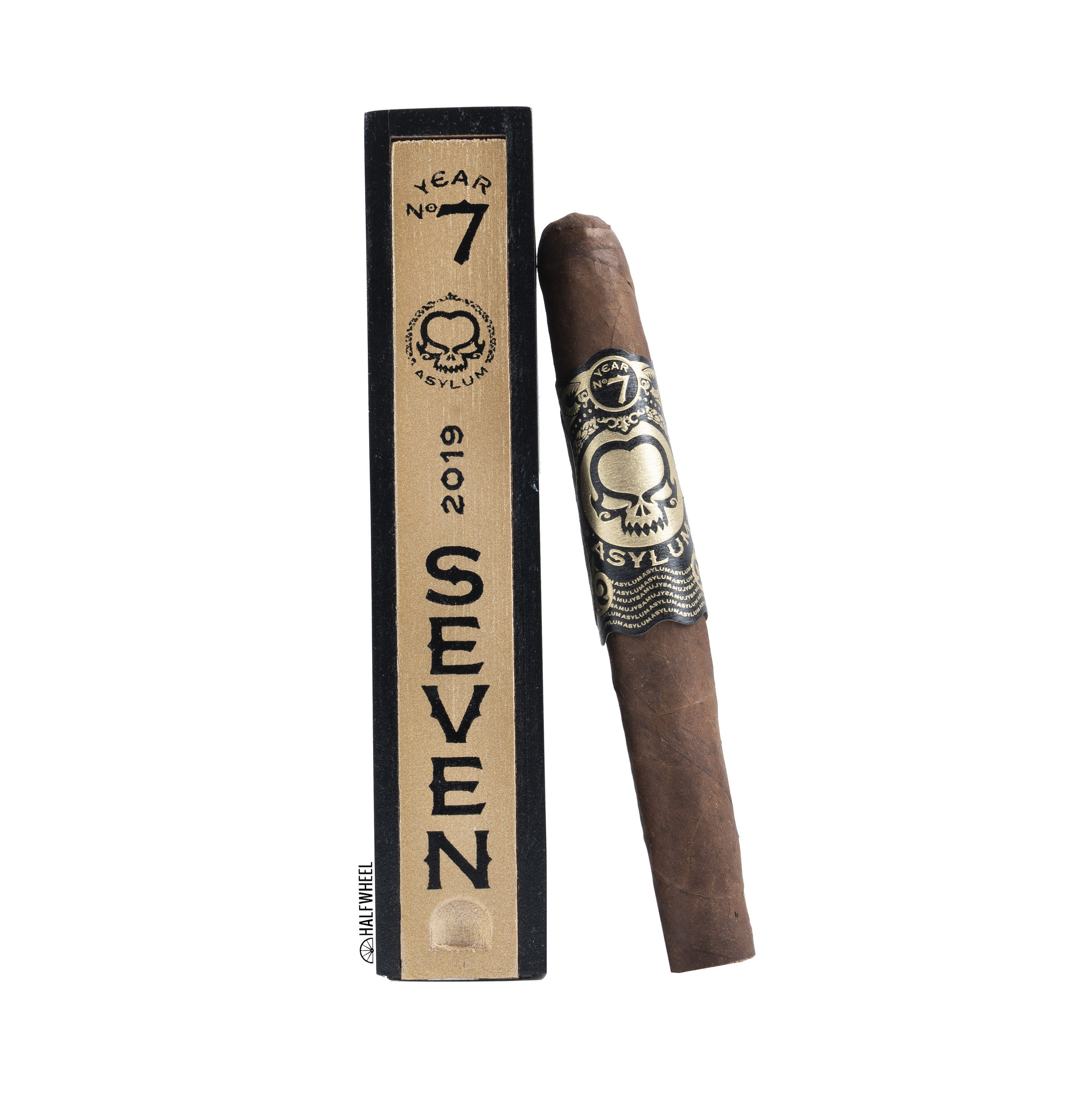 Each cigar is packaged in its own individual coffin and sold in 20-count boxes with only 1,000 boxes released for each vitola. As with any of the cigars rolled in the 11/18 vitola, the first thing I notice when seeing the Asylum Seven odd-looking shape—which can only be described as a double perfecto with two tapered ends and a fat middle—followed by the large gold and black band call but covering a dark espresso brown wrapper that gives off a reddish tint. There is a little bit of oil present as well as a few of prominent veins running up and down the length of the wrapper, and the cigar is hard as a rock when squeezed. Aroma from the wrapper is an intoxicating combination of orange rinds, cinnamon, aromatic cedar, earth, creamy leather and black pepper, while the cold draw brings flavors of strong citrus, leather, apple juice, cinnamon, earth, cedar and dark chocolate.

The flavors in the first third of the Asylum Seven waste no time making themselves known, as a combination of orange citrus and cinnamon pulled straight from the aroma and cold draw easily takes the top spot in the profile, interspersed with other flavors of creamy cedar, tea leaves, leather, earth and hay. There is also a very obvious milk chocolate sweetness on the retrohale along with a noticeable amount of pepper and spice on my tongue, although the latter two seem to be fading as the first third continues,  Both the burn and draw are excellent so far and the smoke production is both thick and copious off of the foot, while the overall strength ends up solidly between the mild and medium marks as the first third ends. 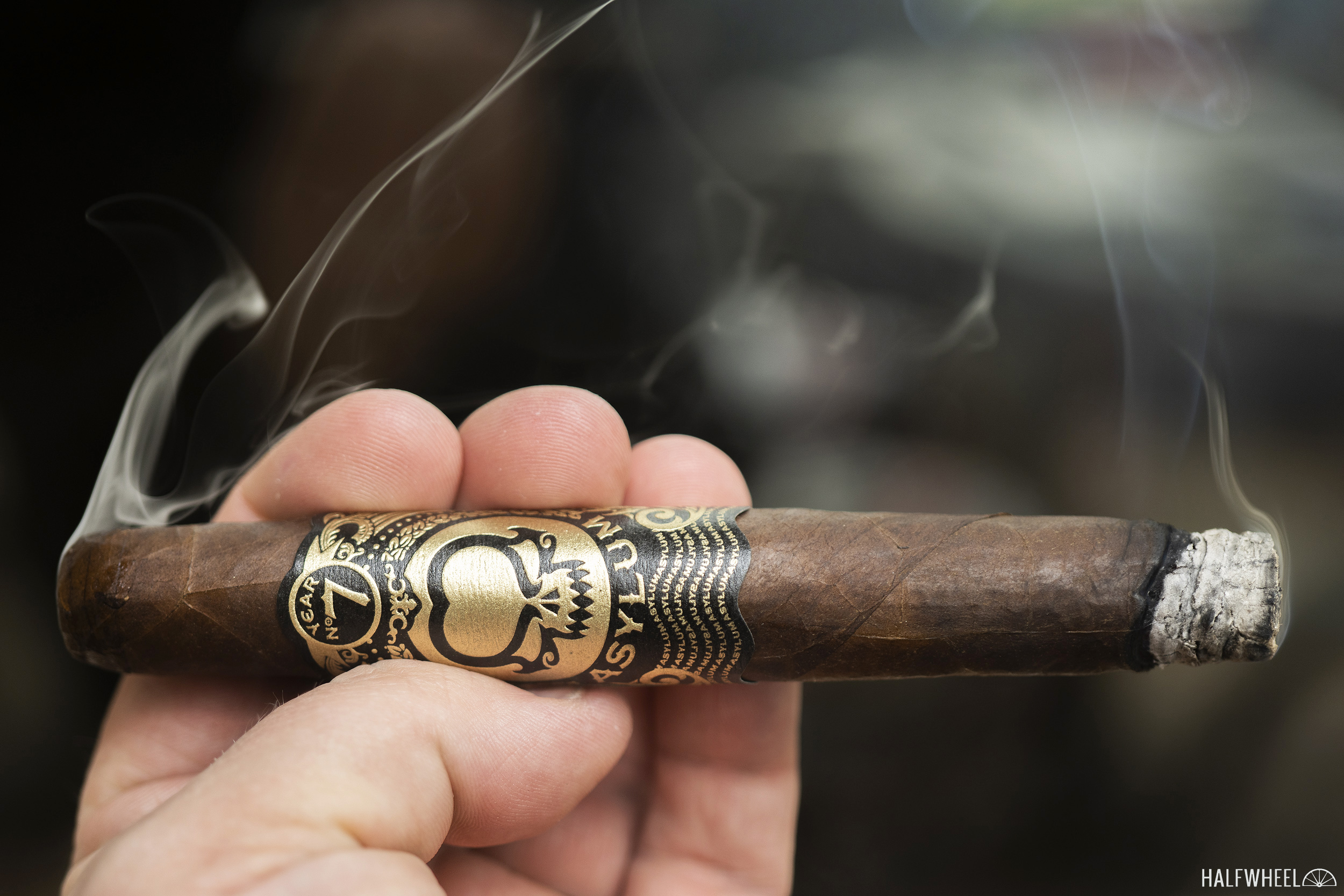 Although the second third of the Asylum Seven 11/18 features the same combination of orange citrus and cinnamon, there is a huge change in the sweetness on the retrohale, which shifts from the milk chocolate note to a distinct melon flavor. In addition, along with less spice and about the same amount of black pepper, there are other notes that flit in and out that are easily strong enough to make an impact on the profile, including hay, freshly roasted espresso beans, creamy cedar, anise, leather and a touch of popcorn. Construction-wise, the draw continues to impress, but the burn has started to waver a bit, eventually becoming problematic enough to need touching up. The smoke production remains quite high while the overall strength comes extremely close to the medium mark by the end of the second third. Unfortunately, the profile during the final third of the Seven 11/18 starts to have issues, with the distinctness of the flavors taking a huge hit, leading to light notes of citrus and cinnamon along with coffee beans, leather, earth, salted peanuts, bread, cedar and manure. The black pepper on the retrohale that was so prevalent in the first two thirds is fading fast, while the melon sweetness is still discernible, but not strong enough to really make much of a major impact. In terms of construction, the burn has decided to play nice by evening up and the draw continues down its wonderful path, while the strength does manage to hit a point solidly in the medium range just before I put the nub down will a little more than an inch left. 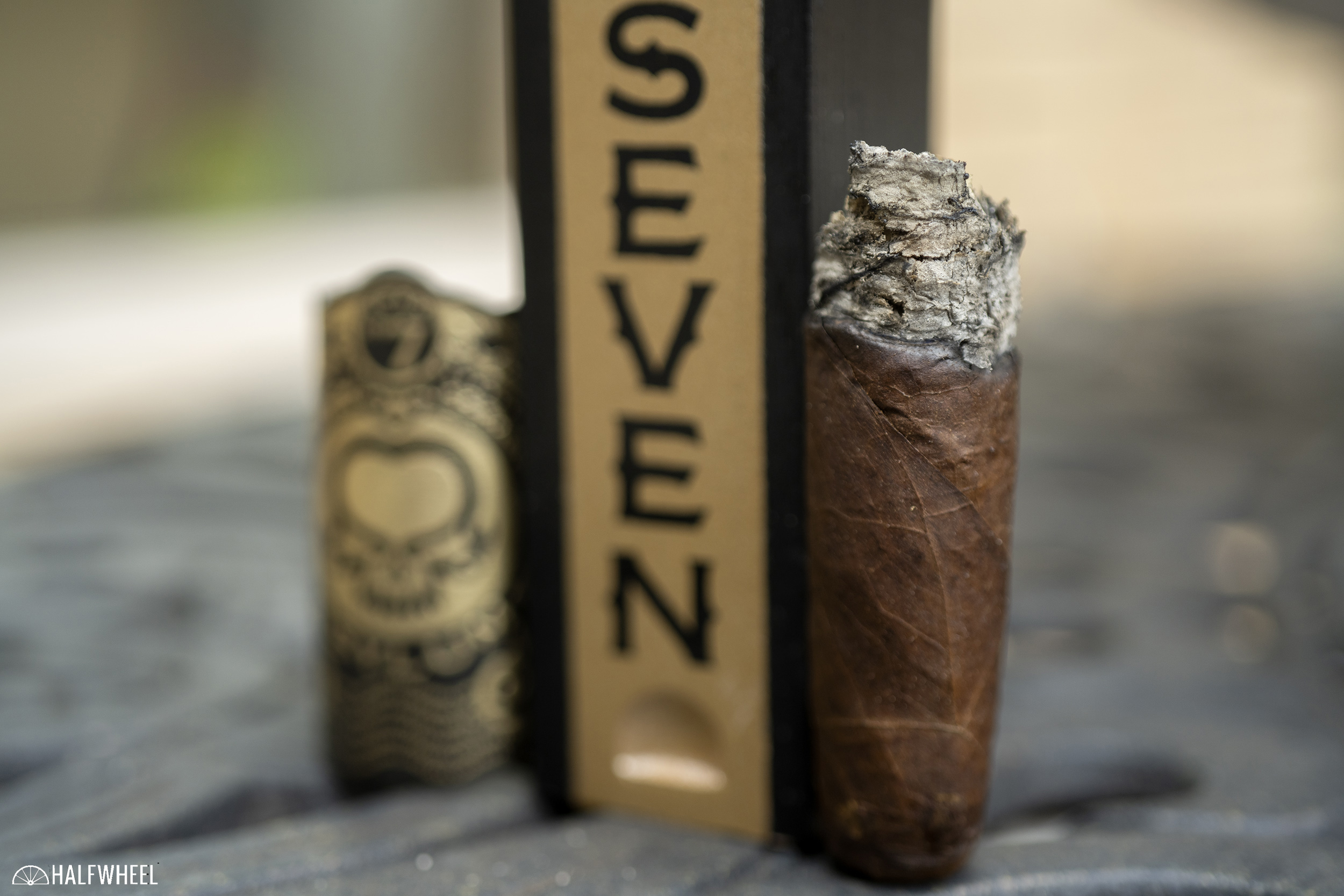 After being pleasantly surprised with the Eiroa Jamastran in the same vitola as this, I had high hopes for the Asylum Seven 11/18, and boy did it deliver. The first two thirds are full of a menagerie of amazingly balanced flavors, including orange rind, cinnamon and melon sweetness. The construction was quite good overall, while the solid medium strength was a perfect choice to not overwhelm the blend. Yes, the complexity does fall apart a bit at the end—specifically, the final third—but even at its worst, the Asylum Seven 11/18 is a heck of a good cigar, and one that anyone looking for a full-flavored profile will enjoy immensely.