The mystique and appeal of aged tobacco run deep in the cigar world; numerous manufacturers put age statements on leaves used or occasionally on the cigars themselves, and the more passionate cigar smoker is known to hunt for old boxes of cigars, either by flipping them over for a date stamp or knowing some sort of marker they carry that shows when they were created.

Collectors gladly pay good money for aged cigars with outstanding provenance, and beam with pride when they pull them out of their collection to show off or enjoy. It’s all for good reason though; much like in wine and spirits, time can do some pretty impressive things to a cigar and its flavor, mellowing and smoothing certain parts, allowing other parts that may have been overpowered to suddenly shine, and of course delivering a link to the past through a tangible object and experience.

It should be no surprise when a company releases a line of aged cigars, but for Asylum Cigars, a new cigar wasn’t going to be enough, so the company decided to create an entire project dedicated to the release of using cigars with the best aged tobaccos from around the world that the company can acquire. That project is called Asylum 33. This corona is a sleek specimen in the hand, smooth to the touch with the smallest of veins on its matte brown wrapper, and a firm roll with just a touch of give. The band is certainly eye catching, a polished aluminum take on silver with a tiny version of the Asylum skull logo pressed into the paper in a repeating pattern. That is secondary to the Eye of Providence, also known as the “all-seeing eye of God,” and its pyramid on the front of the band, which sits on top of the Asylum 33 word mark and all inside a triangle, or second pyramid. In case you had any doubt what the cigar was, 33 is also spelled out and displayed in Roman numerals on the band, making for three expressions of the same number. There is an undeniable note of sweet breads and dough on the foot along with a bit of sweet rum,[ref]Diplomático Reserva Exclusiva, quite possibly.[/ref] with one sample adding a bit of baking spice on top of all of that. The first impression from the cold draw is firm and doesn’t offer more than a bit of standard tobacco taste and a touch of dinner rolls, but further analysis reveals a touch of banana as well.

If you were looking for a suggestion that the Asylum 33 is in fact an aged cigar, the first puffs would certainly indicate it: smooth and mellow, with just a touch of pepper and a bit of chalk as the main standout on the palate. But before that tone gets too entrenched, a bit of pepper comes out through a retrohale and is quickly by followed by some on the palate, and the cigar wakes up and shows it still has plenty of youth left in it. From there, it’s a steady building of the body of the cigar, with pepper marching along in lockstep and helping to give the cigar its leading note as a complex background begins to form that seems to want me to just to enjoy it but instead has me trying to pick it apart into individual components. There isn’t much outright sweetness, but I do a bit of banana and some point and that same sweetness that an Old Fashioned offers in the occasional puff, while a bit of chalk and minerals combine to sharp the 33’s edge just enough to remind me that just because it’s aged, doesn’t mean it doesn’t have a lot to offer. The burn has been good so far, only needing a touch up in the one instance where I got distracted by writing, while the ash does a commendable job holding steady for about an inch. 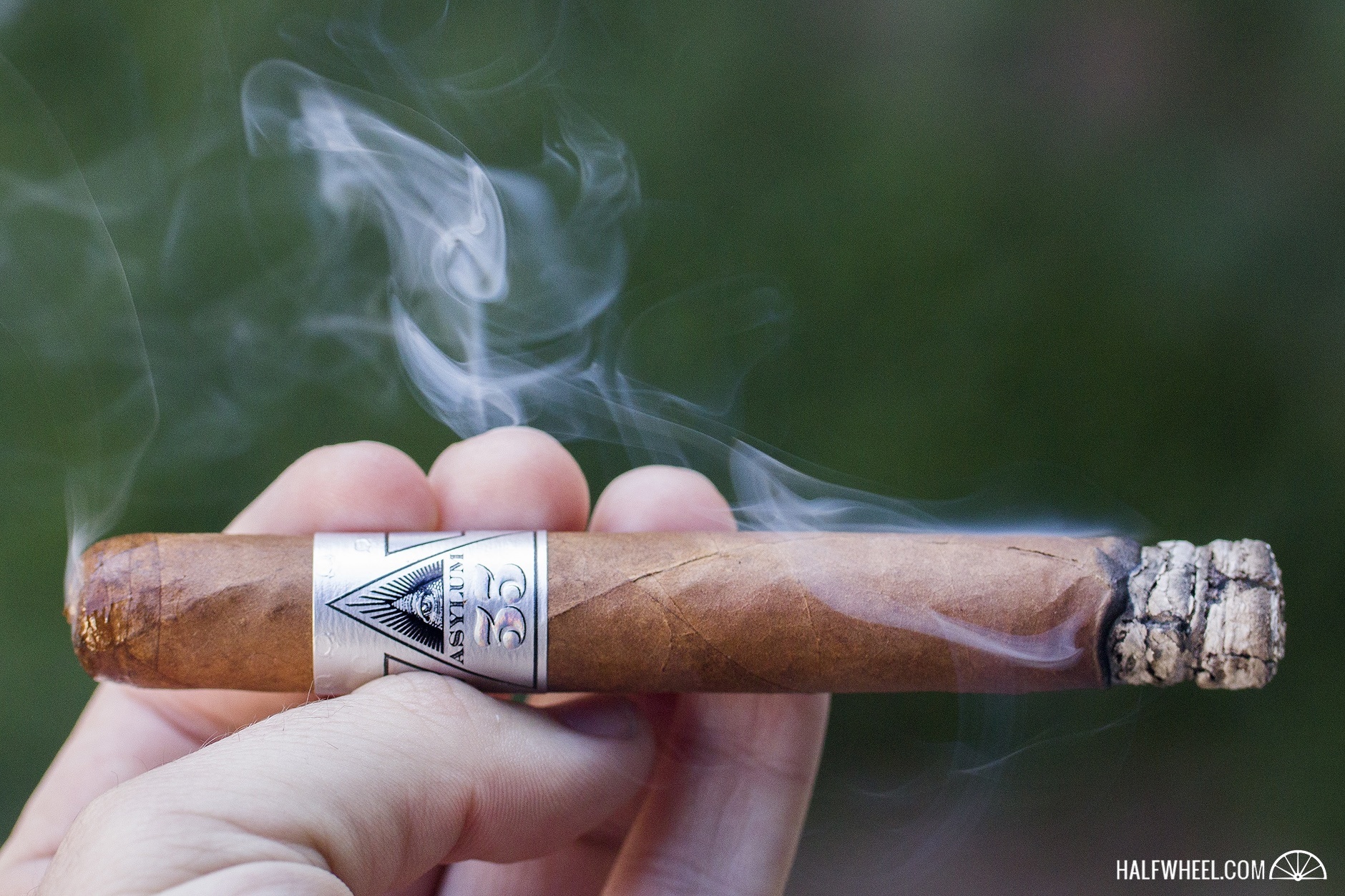 Heading into the second third, it’s clear that the Asylum 33 hasn’t lost its core pepper, but age seems to have refined and sharpened it, as it hits the senses cleanly and crisply, knowing exactly what it can and should do to elicit a distinct response. The draw is almost effortless at this point, as smoke flows freely—not loosely—through the cigar, an important distinction to make because there is still a noticeable resistance to the air flow. Approaching the midpoint, there is a slight thinning of the flavor as it hits the palate with more of an edge, an interesting sensation especially given just how much smoke the cigar is putting out with each puff. White pepper continues to fill the nose while a slight mineral twinge adds its distinct mark, creating a textural lull more than anything, as I could certainly stand a bit fuller, mouth filling smoke. However, it’s not a major downfall, as the cigar retains a good sense of balance and never strays too far from the core flavors it has established. Retrohales retain a good amount of pepper and are the easiest way to affect the flavor and strength; if you want a bit more from the Asylum 33, retrohale; if not, don’t. The second third closes with a first-time taste of warm pretzel and stone ground mustard, a shift in the pepper note that offers a different style of punch, and shows a clarity in the flavor that hasn’t been experienced to this point, while the burn remains firmly on point in all aspects. Because of the proximity of the cherry to the head of the cigar and the relatively small ring gauge of this vitola of the Asylum 33, the final third offers the most opportunity to affect the flavors adversely, but it also packs what appears to be the most potential to deliver a fantastic conclusion. While there isn’t a major transition from the second third into the start of this portion, too frequent puffing (and possibly a relight) turns the flavors harsh and charred, and not in the good way that can be derived from a cigar with meatier or woodier notes than what this offers. However, a slower rate allows the cigar to hold its ground, with the the final two inches being marked by a big flavor profile that highlighted by toast and pepper, shifting into a bit of graham cracker and toasted marshmallow before the cigar gets too small to smoke without burning my lips. Smoke is as plentiful as it has ever been and responds to bigger puffs with even bigger plumes, though again care has to be taken not to get the core burning too warmly. Much like a veteran athlete may not be the fastest or strongest person in the game, the Asylum 33 isn’t the strongest or most overwhelming cigar in a humidor. But also like that athlete who uses his knowledge and experience to get the most out of his skills, the Asylum 33 and the people who created it seems to know exactly what this tobacco does best and puts it on display from start to finish. Strength and balance both show a good level of refinement, and while the flavors aren't the most complex you'll find, are clean and bright on the palate. A outstanding cigar for when you have some time to give it the attention it deserves.