There has been no shortage of celebrities lending their names to cigars, from athletes to comedians and beyond. One of the most recent such projects comes from Asylum Cigars and Tommie Romola, who is known for his appearance on a reality television show called “Carfellas” and has since garnered just shy of 400,000 followers on Instagram.

The cigar’s roots trace back to a merging of Romola’s love for the Asylum 13 7 x 70 and Tom Lazuka of Asylum seeing him on “America’s Got Talent” in 2016 when Romola’s nephew, Sal Valentinetti, appeared on the show.

“So for a couple of years I was trying to get ahold of him,” said Tom Lazuka, founder of Asylum Cigars, to halfwheel. “Eventually I was at Smoke Inn in Delray Beach, Fla. talking with Vincent (Prestigiacomo), the owner. And he’s like ‘oh I’m good friends with BigTime Tommie. Let’s call him right now.’”

That led to the creation of the Asylum 13 BigTime Tommie, a Nicaraguan puro, though none of the specific varietals or regions have been disclosed. It’s currently only available in a 7 x 70 vitola, though the company has announced it is planning a 6 x 60.

The Asylum 13 BigTime Tommie debuted at an event at Smoke Inn Delray Beach, which Lazuka described as likely the single most 7 x 70 cigars being smoked at a single time; he estimated there were 200 people smoking the large ring gauge cigars. 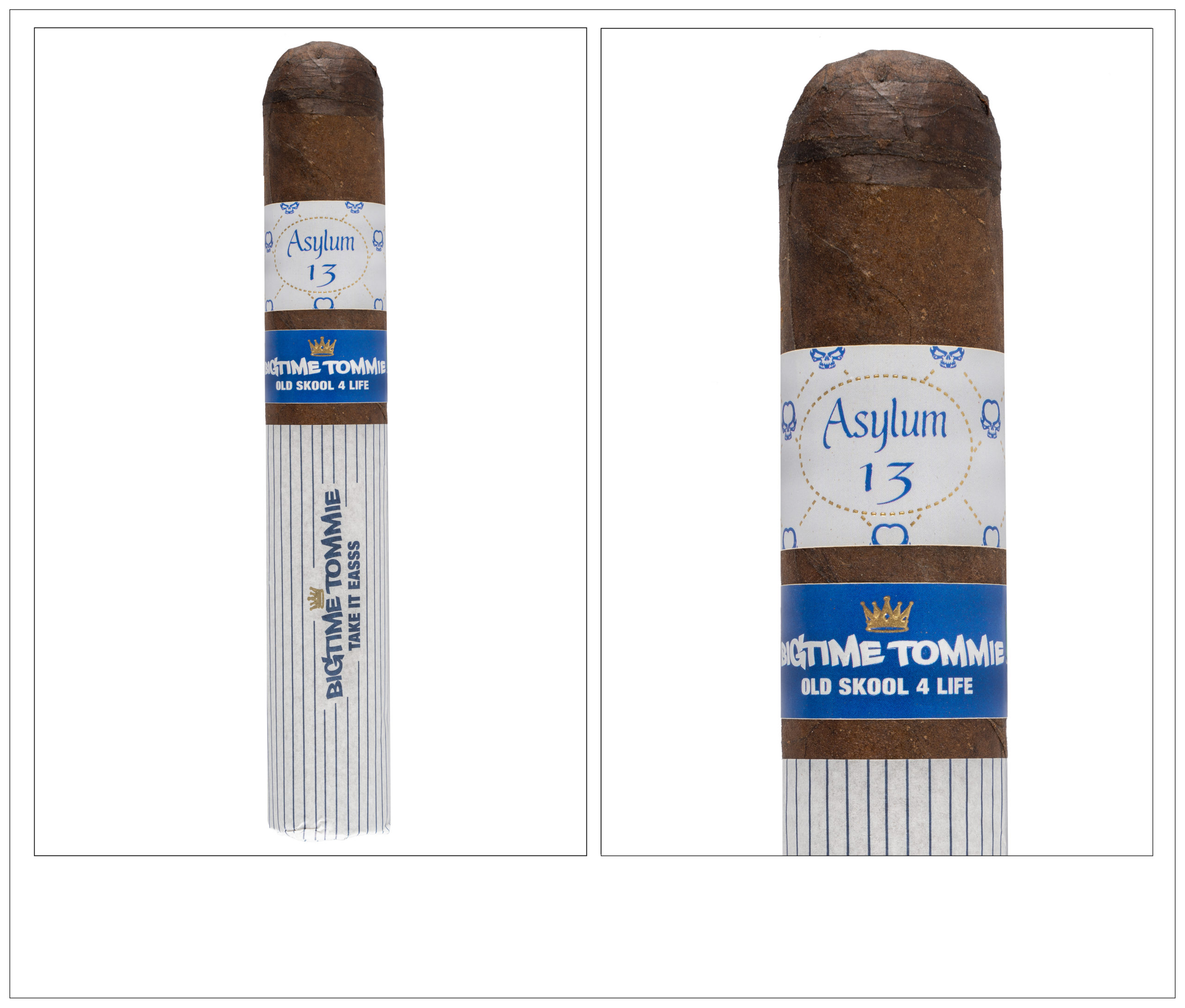 Like all 7 x 70s, the Asylum BigTime Tommie is almost comically big, more of a stage prop than a cigar I would consider purchasing. But it is a decent-looking cigar, ring gauge aside. The wrapper has a very even, meaty brown wrapper to it while offering some oils for the fingers and eyes. Veins are present and fairly prevalent, though small enough to be more of a visual thing than a tactile one. It’s a generally firm cigar, though a more detailed inspection reveals the occasional softer spot. The cap is also noticeable due to its size, and it doesn’t take much for it to look like an ill-fitting toupee. The foot offers an immediate tingle to the nose due to dry wood, a very dry cake donut and some white pepper. That cake aroma can deliver a good bit of sweetness in the right sample, lightening up the profile and definitely giving it the smell of dessert. The cold draw is good in terms of air flow, though as expected there is a lot of air to move, resulting in the feeling of volume rather than firmness. The flavor is much milder though repeats those same flavors, albeit it without the sweetness. There’s a bit of chocolate and earth, the occasional coffee note, and very little pepper to be found.

The Asylum BigTime Tommie starts with a good bit of flavor, namely a rich, damp woodiness, some black pepper, creaminess and a bit of earth sprinkled throughout. If I had to guess based on the first puff, I’d suspect there is either habano or criollo 98 in the blend. As is the case with bigger ring gauge cigars, there is an overall coolness to the profile, which is an interesting sensation on my palate given that I don’t tend to smoke many gordos. With the significant amount of filler, and the need to likely help with combustion, I’m not surprised by the growing amount of creaminess that I find in the cigar, and I will say that it is pretty flavorful even if it seems to mellow the surrounding flavors. Knocking the first clump of ash off reveals a very pleasant white pepper through the nose, while the flavor on the palate remains consistent since the start, save for a bit more creaminess. Construction is very good, and while I’m not crazy about the volume of air I have to move with each puff, the cigar doesn’t make it any more difficult. The burn line is even and smoke production is good, though maybe not quite as voluminous as one might expect for such a big cigar. Flavor is right around a medium-intensity, body is full, and strength is just shy of medium.

Into the second third of the Asylum BigTime Tommie, not much has changed, and the profile remains quite enjoyable if a bit tame beyond the black pepper in the retrohales. A bit of peanut and mixed nut flavor enters to give the profile a nudge in a new direction, and it’s one that works while taking the intensity up just a tick. Retrohales also become a bit more robust, picking up more black pepper than earlier as well as just a bit of char and heat. The midway point of the cigar shows what I would consider to be the first slightest hint of harshness or the flavor losing its first half appeal. In one sample it gets a bit harsh, while another picks up a bit of chalky sourness. Once that flavor sets in, it doesn’t seem to want to leave, staying around in some varying form of intensity throughout the rest of this section. The combustion, draw, burn line and smoke production all remain very good. Flavor now sits at just over medium, body has backed down towards medium-plus, and strength is up a few ticks to medium-plus. Much like a big ship or a big airplane, this big cigar doesn’t make many sudden changes to its flavor profile as it enters the final third. The final third becomes a dance of the cigar holding onto its better flavors from before while trying to fight off the harshness that emerged in the second third. Two of the three cigars do an admirable job, while one loses the battle fairly early on and never comes back, leading to a rather rough experience. There is also the physical fatigue factor, and regardless of the flavor profile, there’s a point in the final third where the cigar gets to be fatiguing, a combination of the turn in flavor and the size of the cigar. The earth, pepper, nuttiness, and occasional chocolate sweetness all steadily diminish, leaving a profile that only fractionally as flavorful as the first half of the second third. The construction does remain very good, as combustion almost never struggles, the draw is very good and the burn line remains very even. It’s not the best finish I’ve ever had in a cigar, but it’s far from the worst. Flavor is back to medium, body is medium-plus, and strength has reached a cumulative point that is medium-full to even full on occasion. For what could be seen as a gimmick cigar, the Asylum BigTime Tommie does have a number of impressive points. First, construction and combustion are solid from start to finish. The first half is far and away the better of the two in terms of flavor and enjoyment, as while the flavors can seem a bit restrained at times and not very distinctive, the net result is palate-friendly, particularly with the cooling effect of the bigger ring gauge. The second half of the cigar sees the flavor turn a bit, getting less palate pleasing with some robustness, occasional sour notes, and even less clarity in the flavors. Where it really struggles is compounding the flavor changes with the physical fatigue that sets in: this was consistently a four-hour long cigar, and one that requires my jaw to be open wider than I would like it. I think the blend has enough merit that I'd be open to smoking it in a smaller and thinner vitola, but for now I'll be leaving the 7 x 70 version on the shelf.