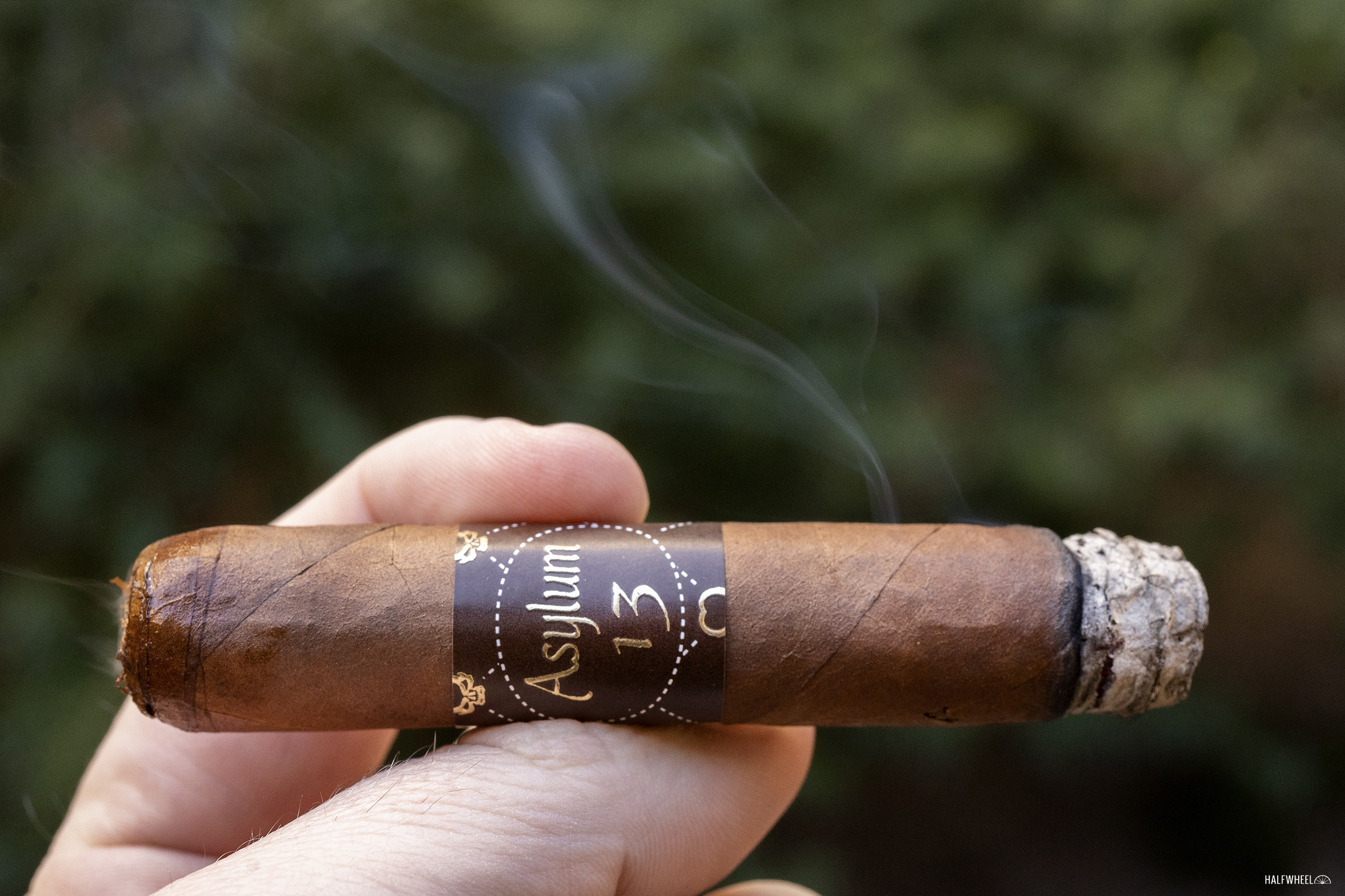 I would venture to guess that the average cigar smoker who peruses his or her local humidor knows that Asylum Cigars is known for big ring gauges. While the company has some more standard sizes in its portfolio, it seems to be best known its 60, 70 and 80 ring gauge offerings, which is why the company’s newest release was a bit of a surprise.

Like many manufacturers and brands do as the cold weather settles in, the company released a smaller format cigar designed to be enjoyed without the need for an extended time commitment. In fact, just 20 minutes would be all that one should need to enjoy the aptly named Asylum 13 20 Minute Toms.

Beyond the reference to the smoking time, the cigar’s name is also a nod to brand owner Tom Lazuka. It’s a Honduran corojo puro that is offered in a 4 x 48 Rothchild vitola, priced at just $6 per cigar before taxes, and offered in packs of five cigars. 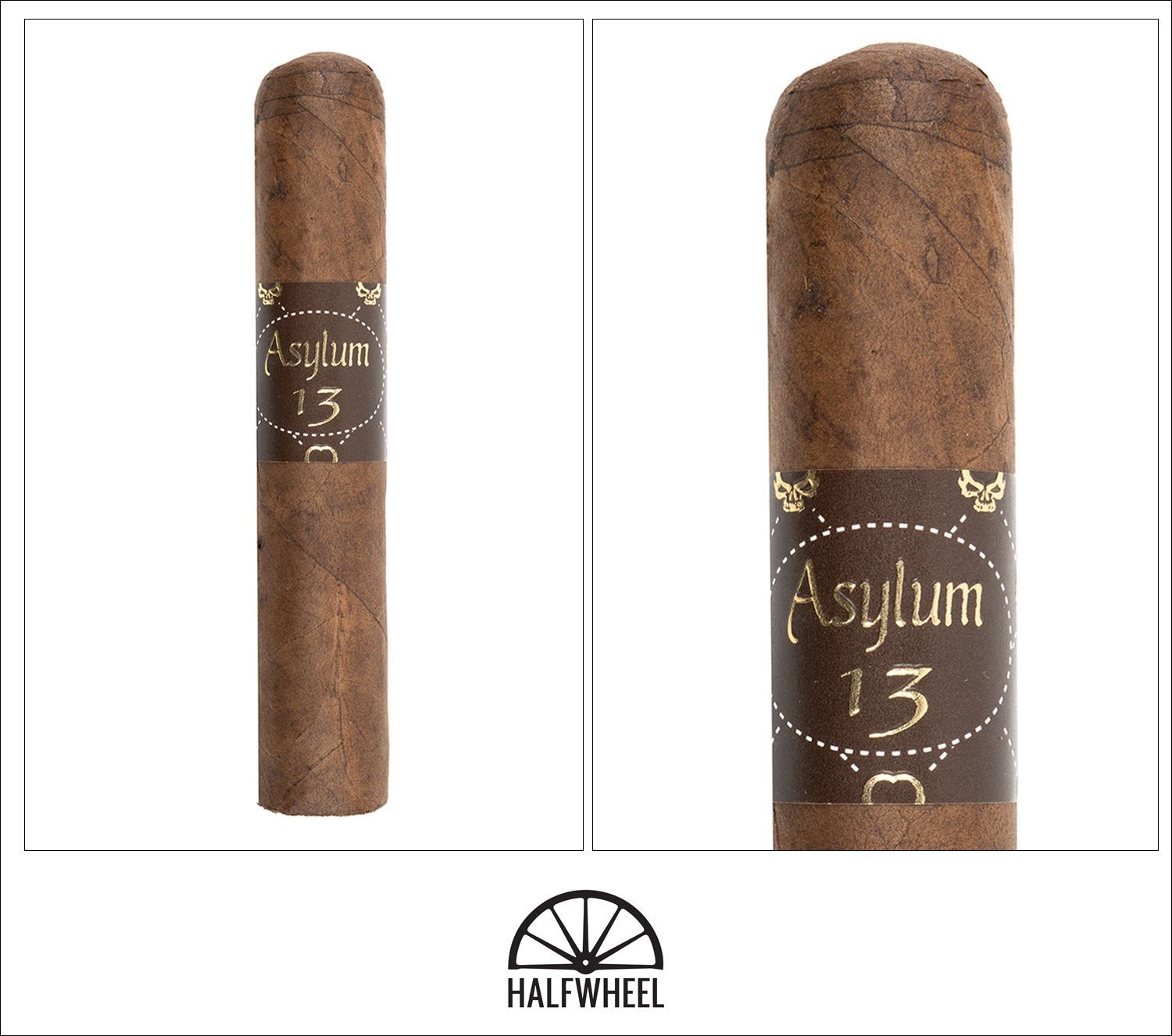 I’m not sure that I would look at the Asylum 13 Twenty Minute Toms and immediately think it’s a 20-minute cigar, maybe something closer to 40 minutes, but we shall see. Between the cigar and the band, there is a lot of brown to take in, and the band reminds me a bit of Louis Vuitton leather with its color and embossing. The wrapper has a bit of mottling, but it’s nothing out of the ordinary. It is a firmly rolled cigar, free from any visual distractions and capped off well. The foot has aromas of fragrant soil, a bit of chicken, minimal sweetness and pretty much no pepper. The cold draw is good if occasionally open, and also surprisingly sweet at times, with a first flavor that reminds me of an orange Creamsicle. Behind that are more familiar flavors of earth and tobacco, with a bit of black pepper in an accent role. Air moves well, with a bit of earthiness and pepper, though not enough that seems to tip the cigar’s hand.

The 20 Minute Toms wastes no time getting down to business, putting out a hearty, earthy and peppery smoke right from the get-go. It may not be the best expression of Honduran terroir that I have ever had, but some of the samples leave almost no room for debate as to what is being smoked within the first couple of puffs. The profile lightens up a bit by way of some creaminess coming in and the earthiness letting go of some of its heavier notes, but there is still the woodiness and pepper lingering on the palate. Retrohales are peppery and a pretty accurate expression of what I tend to think of corojo offering: a leading note of pepper with Honduran terroir not far behind, which is a mix of dry, slightly dusty soil and a richer wood aspect. The cigar performs very well through the first third, burning evenly with plenty of smoke and an even burn line. Flavor is medium-full, body is closer to full, and strength is medium-plus at the onset but seems destined to deliver more before long.

Given the intervals at which one chooses to ash the Asylum 13 20 Minute Toms, the lines tend to blur when it comes to dividing the cigar into thirds. The middle inch or so of the cigar brings about more pepper to each retrohale, eventually reaching a point where it no longer seems to be just black pepper but now incorporates a red chili pepper kind of heat. It’s very enjoyable, though certainly won’t be for everyone as it’s a very stimulating sensation for the olfactory nerves. If there’s a section that might get overlooked, it’s this one, which for me is that I find myself trying to extend the first third while also beginning to focus on the final third. Construction remains fantastic, flavor is medium-full to full, body is medium-full, and strength is close to full. 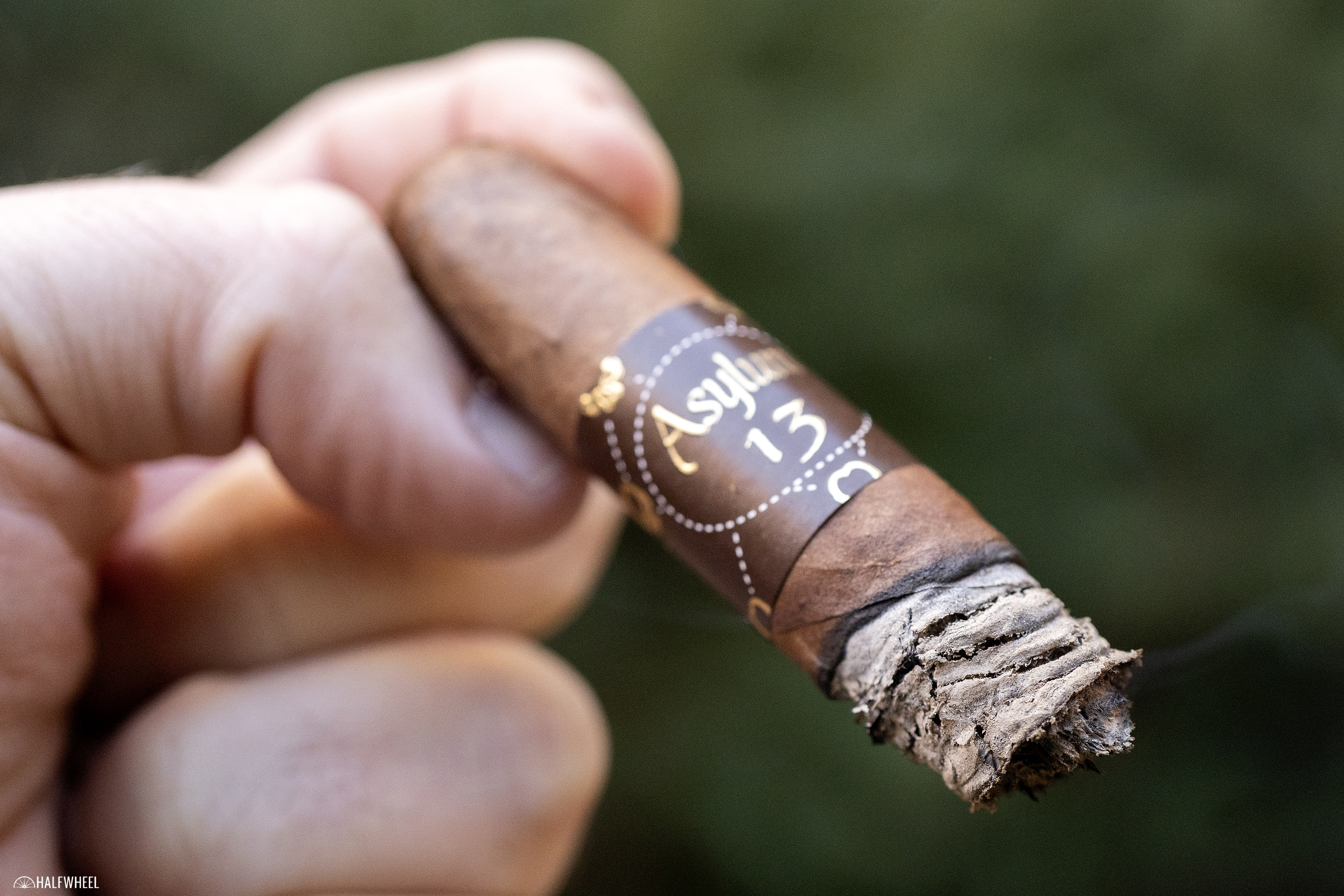 Pepper settles down just a bit at the start of the final third of the Asylum Twenty Minute Toms as the creaminess from earlier returns with a wonderful softening effect on the smoke. As the burn line steadily approaches the head of the cigar, there’s a bit less earth, a bit more woodiness, and just a little bit of sweetness starting to emerge, even though the profile seems to be drying out at the same time. The tip of my tongue tingles a good bit more than it did earlier, and the finish seems just a bit more extended as well. Pepper comes back with a good vengeance in the final inch or so, with retrohales the first to show the terroir-laden expression of it. The final inch sees the cigar ever so slightly fall out of balance, getting a tick harsh but staying generally enjoyable. Construction remains fantastic and free from problems. Flavor, body and strength all finish right around medium-full. 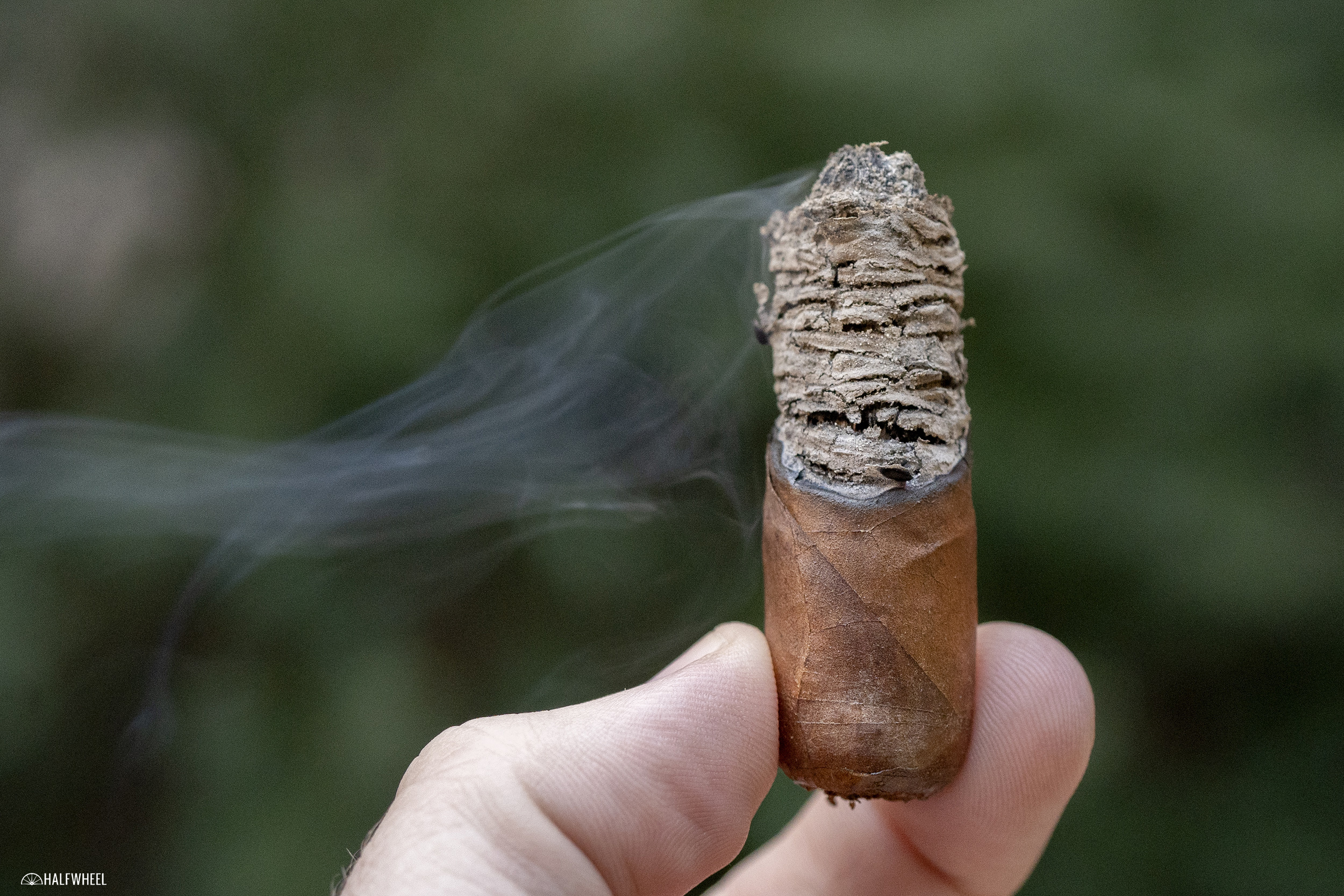 Whatever the Asylum 13 20 Minute Toms might lack in size, it more than makes up for in flavor. The cigar smokes as if it knows that it needs to deliver, and from the get-go hits the palate with a nearly full flavor profile rich in well-developed Honduran corojo. There is a steady heaping of rich, flavorful earth, clean pepper, and accents of dry, hearty woods that add to both the flavor and physical sensation on the taste buds. Asylum may be known for its big, beefy cigars, but the 20 Minute Toms shows that the company is more than capable of delivering an incredibly flavorful cigar in a compact format.