While it’s hard to say who was the originator of the limited edition, Arturo Fuente would certainly be in the running because of five letters: OpusX. While it seems like pretty much every manufacturer is making limited editions, store exclusives, regional editions or other cigars that simply aren’t available to everyone in regular quantities, Fuente might just be the ones that brought the idea of the limited edition into the minds of most current cigar smokers.

The company has always been known for its rarities, from the cigars you can only find at Casa Fuente in Las Vegas to the unicorns like the OpusX Football, Fuente is known as much for its limited editions as it is for its plentiful regular production cigars.

In the final months of 2012, Arturo Fuente expanded its domain of limited editions with a cigar that literally bore no name. Well, it did, except that its name was literally, no name. The Arturo Fuente Unnamed Reserve 2012 was a 5 3/4 x 48 with a Sun Grown wrapper over Don Carlos fillers and whose production numbers were said to be even more limited than the 2011 release of the ForbiddenX 13.

In 2013 the company took things a step further, shipping two different sizes in the same box, all under the Unnamed Reserve header. Inside that year’s box were ten 5 1/4 x 48 robustos and ten 5 3/4 x 50 toros, again in an undisclosed blend. For 2014, Fuente returned to shipping just one size of the Unnamed Reserve but it was one of it the company’s most girthy cigars to date, a 6 x 60 vitola that shipped alongside a similarly sized new addition to its Rosado line called the Magnum Super 60 as well as the coveted 8-5-8 Sungrown.

The company is keeping the blend of the cigar under wraps, though it’s likely that there is some similarities to the previous releases and other cigars in the company’s vast portfolio, meaning that there’s a good bit of Dominican tobacco used. While I’ve smoked plenty of Fuentes before and enough 6 x 60s to know one when I see one, seeing a Fuente in a 6 x 60 is still a bit strange, sort of like the AVO Heritage Lancero I reviewed in October 2014. I will say thought that I don’t get the same overwhelming feeling that most 60 ring gauge sticks give me; possibly because the wrapper is a bit lighter and the cigar itself isn’t overly heavy. The top leaf is a gorgeous golden brown with very small veins, no tooth and just a bit of texture in the hand. It has a slight press to it and feels firm from head to toe. The foot on the first cigar I smoked was a bit disconcerting as it looked significantly underfilled—more on that in the notes—and something I only came across on the one sample. From the foot there aren’t many standout aromas, but I do get a bit of kettle corn and sweet corn or rice cereal, while the cold draw is also reserved with the flavors, showing a similar corn note with a touch of thick syrupy sweetness and ranging from slightly loose to slightly firm.

The first puffs of the Arturo Fuente are smooth and fairly neutral, offering up a bit of the same flavors that were presented on the cold draw and unlit foot, though with a bit more tang from the terroir. A dry cedar note seems to be lingering in the background, occasionally making an appearance but largely resigned to just hinting at its presence, yet the body of the cigar suggests there is something more awaiting the smoker down the road thanks to hints of a bit more gravitas than might be picked up on a casual puff. After just a few minutes and puffs on the first Unnamed Reserve, I happened to glance down and see a burn mark coming through the cigar from the inside, a few millimeters above the burn line, something I can’t recall seeing happen on any other cigar I’ve smoked. While it does throw the burn line off a bit when the two meet, the effect seems negligible at best. As often seems to be the case with thin wrappers, I notice a small crack in the leaf around the middle of the cigar; whether it’s the dry air, the heat of the cigar, something else or a combination, it does have me a bit nervous. The cigar is shifting to a bit creamier profile, and when the first clump of ash drops with a thud on to my lap, pepper enters the mix, lending a bit more weight and spark to things. It’s a bit lighter in the nose but retrohales are far from boring thanks to a bit of chalk and pepper and the palate certainly isn’t getting a break. Strength is medium while flavor has shifted from medium-minus to just north of medium, and the aroma does a great job complementing both while the finish is subtle and lingering. The crack near the midpoint that developed earlier in the first cigar I smoked for this review—and the one that’s seen in the photographs—has turned into a flap, looking almost like a secret compartment opening up. I’m also intrigued by the light gray ash, having peeled away a bit and looking like the neatly stacked layers of an onion. The pepper has backed away a bit at the start of the second third, leaving a mellow, creamy flavor on the tongue with just a bit of zing still in the aroma. Without knowing how this blend compares to that of years past, I’m inclined to think the bigger ring gauge is helping to mellow things out but certainly doesn’t go to a point of flavor boredom. There is a slow and steady evolution of flavors that occurs in this section; it’s the somewhat typical mellowing and rebuilding process that sees pepper start to creep back in along with a dry wood note that seems to be the bridge to the final third. The ash is a bit flaky and small chunks seem to detach with every puff, though the burn line has done a more than adequate job at staying even. 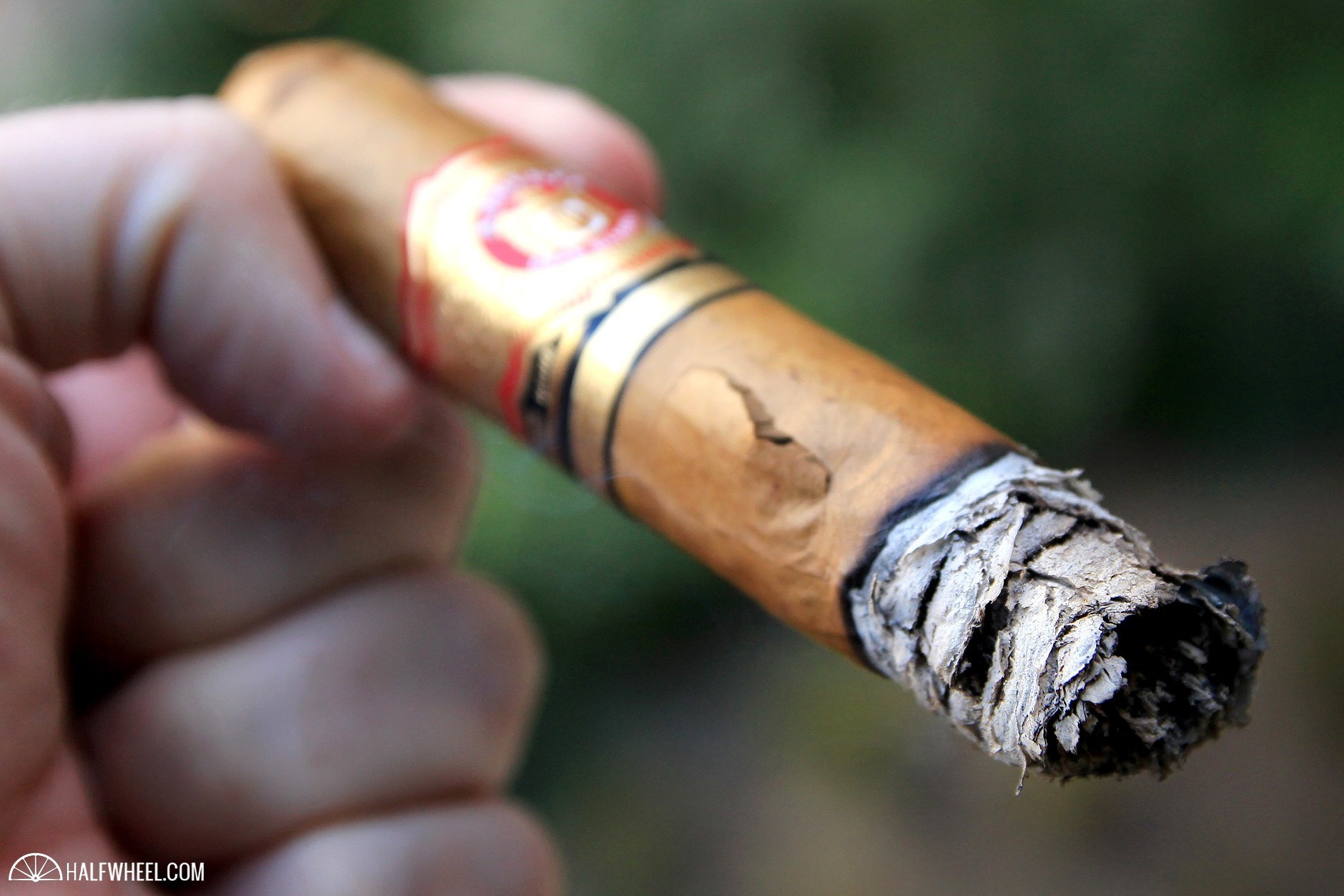 While the progression of the burn line had been fairly quick through the first two thirds, it certainly slows down at the start of the final third, as the cigar also starts to feel a bit softer and the puffs are a bit more labored, though smoke production is still solid. I can’t tell how much it might be affecting the flavor, but the balance that the Unnamed Reserve had shown up to this point seems to be coming slightly undone, as the flavor takes a dive towards becoming damp and showing less of the pure cream note that I was enjoying earlier. Another small crack has developed in the wrapper, again right along the small veins. It’s the most sizable of the bunch, tracing all the way up to the cap, but again the cigar is staying largely intact. With less than two inches to go, the flavor lightens back up a bit and gets back on the track I anticipated it would be on, though the creaminess is still lacking a bit and the pepper isn’t what it once was. The aroma is showing much more sweetness than it had previously, turning almost floral at points and becoming a fragrant end to the cigar. I can’t say I’ve been floored by any of the Unnamed Reserve releases, at least not in the way that some of Fuente’s other limited editions have impressed me. That’s not to say that they are bad, rather that they don’t show the best that the company has to offer. With the 2014 edition, I was expecting a bit flatter cigar because of the size, but I have to admit that I was surprised by the amount of pepper and flavor shifts that the cigar offered, and while it’s still not my favorite Fuente, it’s an enjoyable cigar that somehow doesn’t feel like a 60 ring gauge. If you’re in the mood for a sizable smoke that offers some signature Dominican flavors without an overbearing amount of strength, the Arturo Fuente Unnamed Reserve 2014 certainly seems like a good option.