Cigar names are an interesting thing: they range from the simple—a simple number such as the iconic Montecristo No.2—to the extreme and almost absurd, examples of which I will respectfully decline to provide out of respect to certain manufacturers.

In the case of one of Arturo Fuente’s latest limited editions, it was given no name—literally. The Arturo Fuente Unnamed Reserve, or Reserva Sin Nombre as it is called on the box.

The line debuted towards the end of 2012 in a 5 3/4 x 48 vitola that allegedly used a sun grown wrapper over Don Carlos fillers with the promise that it was a limited release, more so than even the previous year’s ForbiddenX 13.

The following year, two cigars were released: a 5 1/4 x 48 robusto and 5 3/4 x 50 toro, with each box containing ten of each size. For 2014, Fuente went big, releasing the Unnamed Reserve in a 6 x 60 gordo vitola and with no details about the blend or production numbers being released.

Here’s what I said about the Arturo Fuente Unnamed Reserve 2014 when I reviewed it in January 2015:

I can’t say I’ve been floored by any of the Unnamed Reserve releases, at least not in the way that some of Fuente’s other limited editions have impressed me. That’s not to say that they are bad, rather that they don’t show the best that the company has to offer. With the 2014 edition, I was expecting a bit flatter cigar because of the size, but I have to admit that I was surprised by the amount of pepper and flavor shifts that the cigar offered, and while it’s still not my favorite Fuente, it’s an enjoyable cigar that somehow doesn’t feel like a 60 ring gauge. If you’re in the mood for a sizable smoke that offers some signature Dominican flavors without an overbearing amount of strength, the Arturo Fuente Unnamed Reserve 2014 certainly seems like a good option.

There’s a certain beauty to the combination of shape and color in the Arturo Fuente Unnamed Reserva 2014; the wrapper is one of the lightest shades of brown I’ve seen in some time, with the red, black and gold matching up very well with it. The pressed cylinder shape is equally appealing, with very few veins to distract the eyes and a near perfect roll pulling the eyes from the ribbon covered foot to the round cap laid on top of the head. It’s a smooth cigar to the touch, a contrast to the heft felt in the hand from the shape and amount of tobacco packed inside and offers a uniform firmness from head to foot. From the foot I get cool butter, white bread and cream that lead the way for trailing pepper. The cold draw is easy without being loose and presents a mild, creamy profile with a touch of dry lumberyard wood for a bit of character.

While the Arturo Fuente Unnamed Reserve extended a mild introduction before being lit, once the foot is toasted the flavors are much more upfront: wood and white pepper lead the way, with a touch of sourness in the background twisting the tongue a bit. That last part fades away fairly quickly, but my attention is then turned towards a slightly uneven burn line. Despite my best attempts to give the cigar an even light, it seems that one stretch of the wrapper doesn’t want to cooperate with my request to burn and leaves a unburnt strip behind while the rest of it continues to burn evenly. While I work to correct that, the flavor has shifted into a creamy base with top notes of subtle white pepper, wood and a bit of mineral driven earth, something I generally associate with Dominican tobacco, and while the blend for this cigar hasn’t been disclosed, I’d be hard-pressed to think there isn’t some Dominican tobacco inside. It’s an incredibly enjoyable and balanced flavor that carries the cigar to its midpoint, though the burn issues have once again returned and lead me to a decision of letting them be or risk ruining the taste with by touching the cigar up with a lighter. 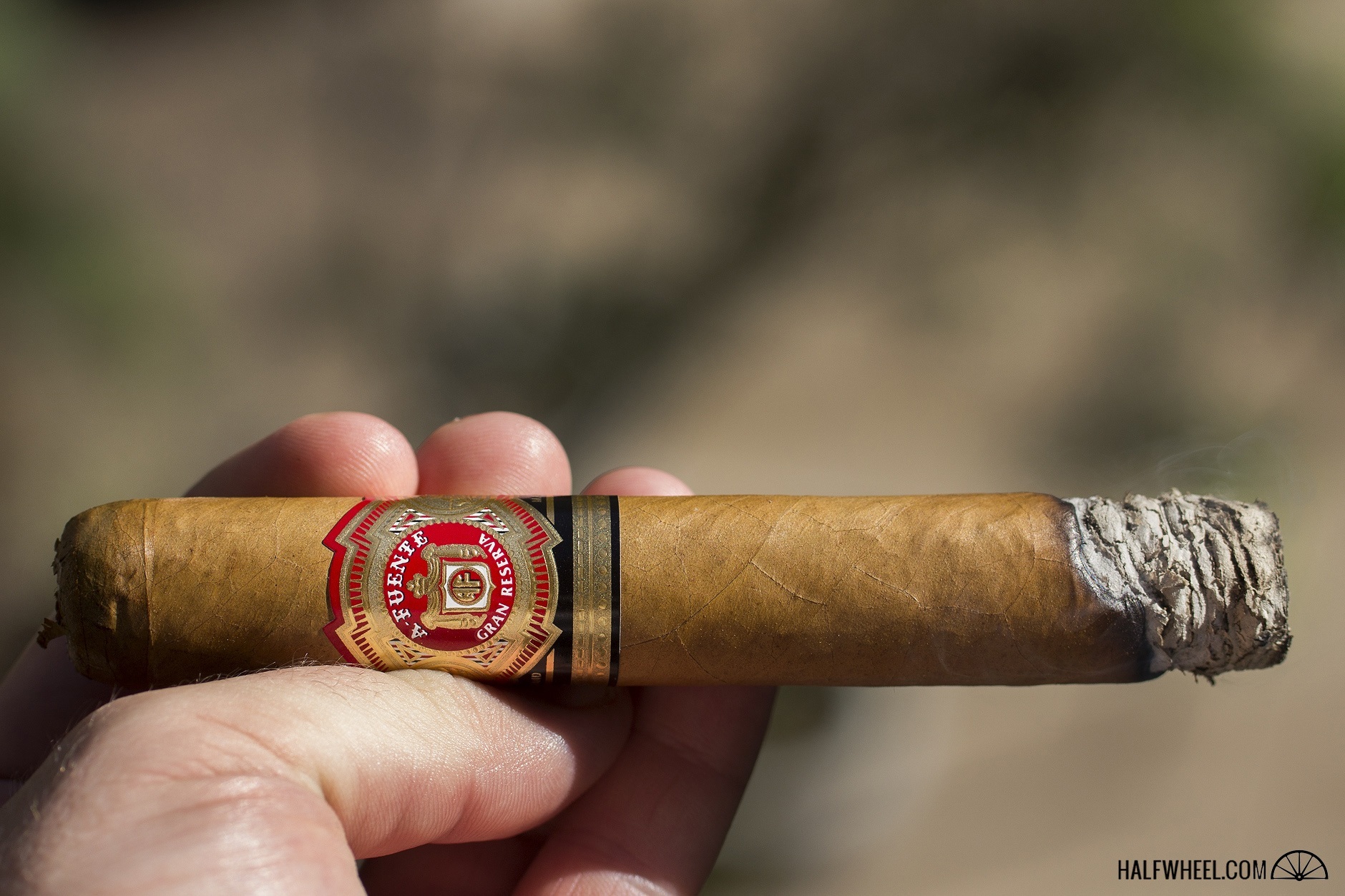 With the Unnamed Reserve 2014 at its midpoint, I opt to see if the burn issue can resolve itself, at least in the immediate future or until the next clump of ash falls off, which currently sits at a dense inch in length. The flavor has picked up a bit of black pepper, moving it from an easy to smoke first cigar in the morning to something with a bit more power for once the palate—and the rest of me—is more wide awake. While smoke production or overall combustion have yet to be an issue, the burn line continues to struggle and I resort to giving it as gentle of a nudge as I can to even it out as the final third approaches. While I hadn’t thought some dryboxing would be needed, a quick look at my original review suggests otherwise, as the three samples I originally smoked had a handful of burn issues with the wrapper.

Much like it did when I originally smoked the Unnamed Reserve, the final third sees the smoke get denser and heavier, while the flavor gets a bit more chewy and sheds the creaminess of the first half in favor or more minerals and pepper. The burn issues continue as one side of the cigar seems to simply refuse burning, while the flavor has picked up some serious char to move it into a completely new flavor profile from where it started, something that when combined with the burn problems has me beginning to wonder just how far down I’ll smoke this cigar. The sourness has from the first third returns in a slightly different manifestation, further piling on the downturn of the flavor and leaving an unpleasantness on my tongue that I’m forced to shake via several sips of water. In one last attempt to salvage the cigar, I cut off the ash and unburnt tobacco to a clean, even surface, only to find that several layers of tobacco weren’t burning very well; a relight brings back a bit cleaner flavor profile with white pepper leading things on the palate and black pepper putting in work on the nostrils via a final retrohale, a decent salvaging of the final puffs.

Much like when I first smoked the Arturo Fuente Unnamed Reserve 2014, I had very high hopes for it, and now nine-plus months since smoking it originally, those hopes still remain largely unfulfilled. The first half of this cigar borders on sublime at times with a subtle creaminess that glides across the palate and eases the pepper into the mix, while the final third brings about harshness and robustness that leave me reaching for water to rinse the taste off. Combined with the burn issues that plagued both this cigar and the originals, I’m left feeling like a $16 cigar from one of the top names in the cigar business should have performed much better. While the smaller vitolas from previous years seem to still be preferred, this 6 x 60 version simply doesn’t cut it.