If I had to name the memorable products from Arturo Fuente’s 2018 IPCPR Convention & Trade Show, it would be: Don Carlos The Man, the accompanying humidor, 8-5-8 Sun Grown, and bobbleheads. Not on the list would be the Arturo Fuente Oro Magnum R Super Sixty.

Somewhat quietly displayed in one case was a new cigar with a large piece of gold covering the similarly-gold wrapper of a 6 x 60. That cigar is the Arturo Fuente Oro Magnum R Super Sixty, a 6 x 60 version of Fuente’s Magnum R blend, only with an Ecuadorian Connecticut wrapper replacing the Ecuadorian sun grown rosado wrapper that is found on the normal Magnum R.

While the cigar isn’t a limited edition, it is listed as a limited production. 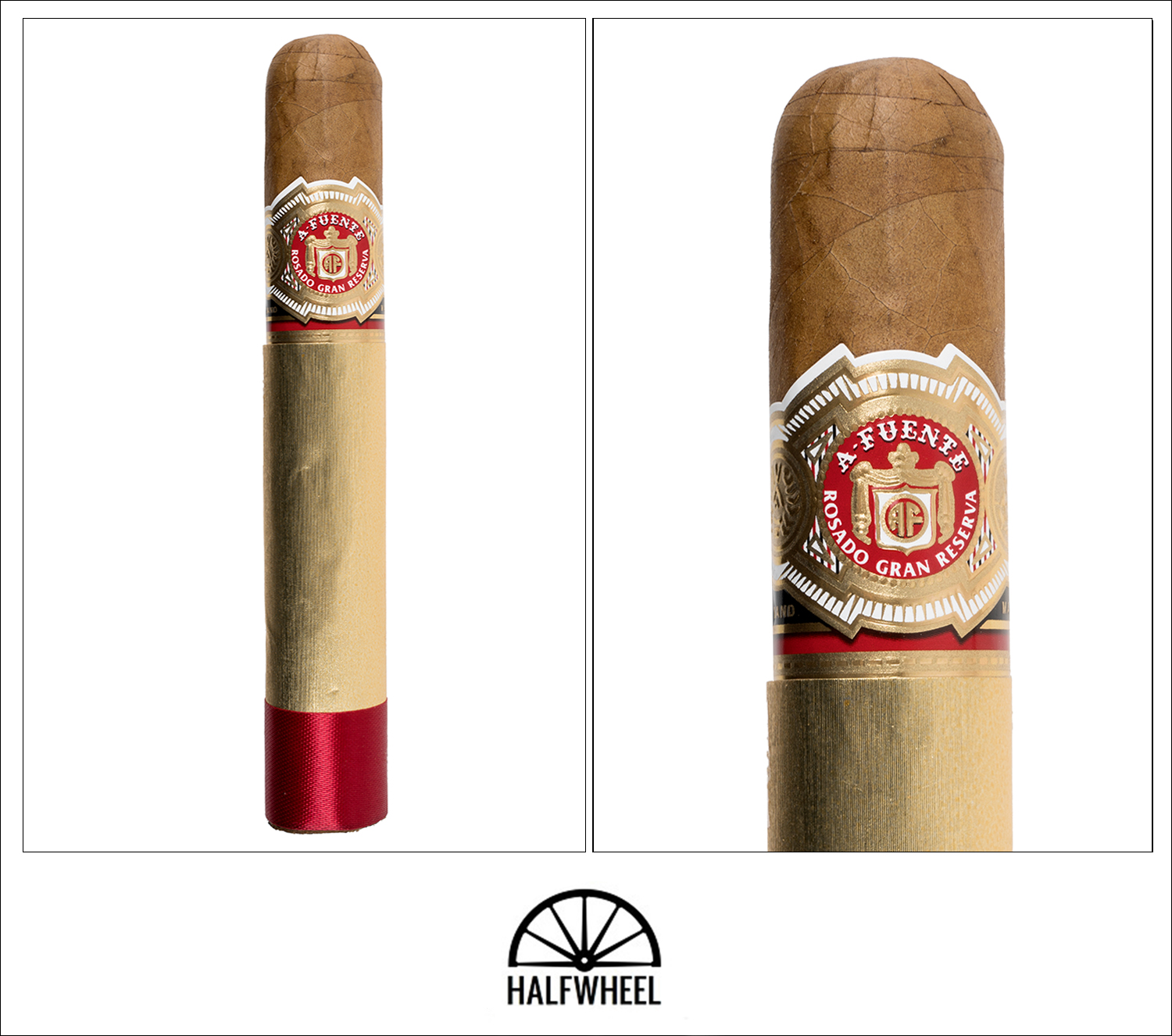 While there’s no real deception, it’s challenging to get a good luck at the appearance of the Arturo Fuente Oro Magnum R Super Sixty given the gigantic gold foil that covers most of the wrapper. Once removed, there’s a nice golden hue to the wrapper, certainly a different color from the typical Magnum R appearance. Aroma off the wrapper is mild to medium with a lemon cake-like flavor. The foot has more of that lemon cake flavor along with nuttiness and a bit of floral flavors, around medium-full. The cold draw has some of the lemon cake, earthiness, a touch of the floral flavors and some creaminess, right around medium-plus.

It begins with a lot of earthiness along with some hints of lemon and signs of pepper, though I can’t detect much beyond the earthiness. The Arturo Fuente Oro Magnum R Super Sixty settles on a core of earthiness and toastiness with a fair amount of acorns, coffee bean and some meatiness. Retorhales deliver a defined saltiness and leave both citrus on the roof of the mouth and cinnamon on thee back of the throat. Flavor picks up to medium full, nearly full, while body and strength are both medium-plus. Construction is great with a super firm ash and plenty of smoke production. 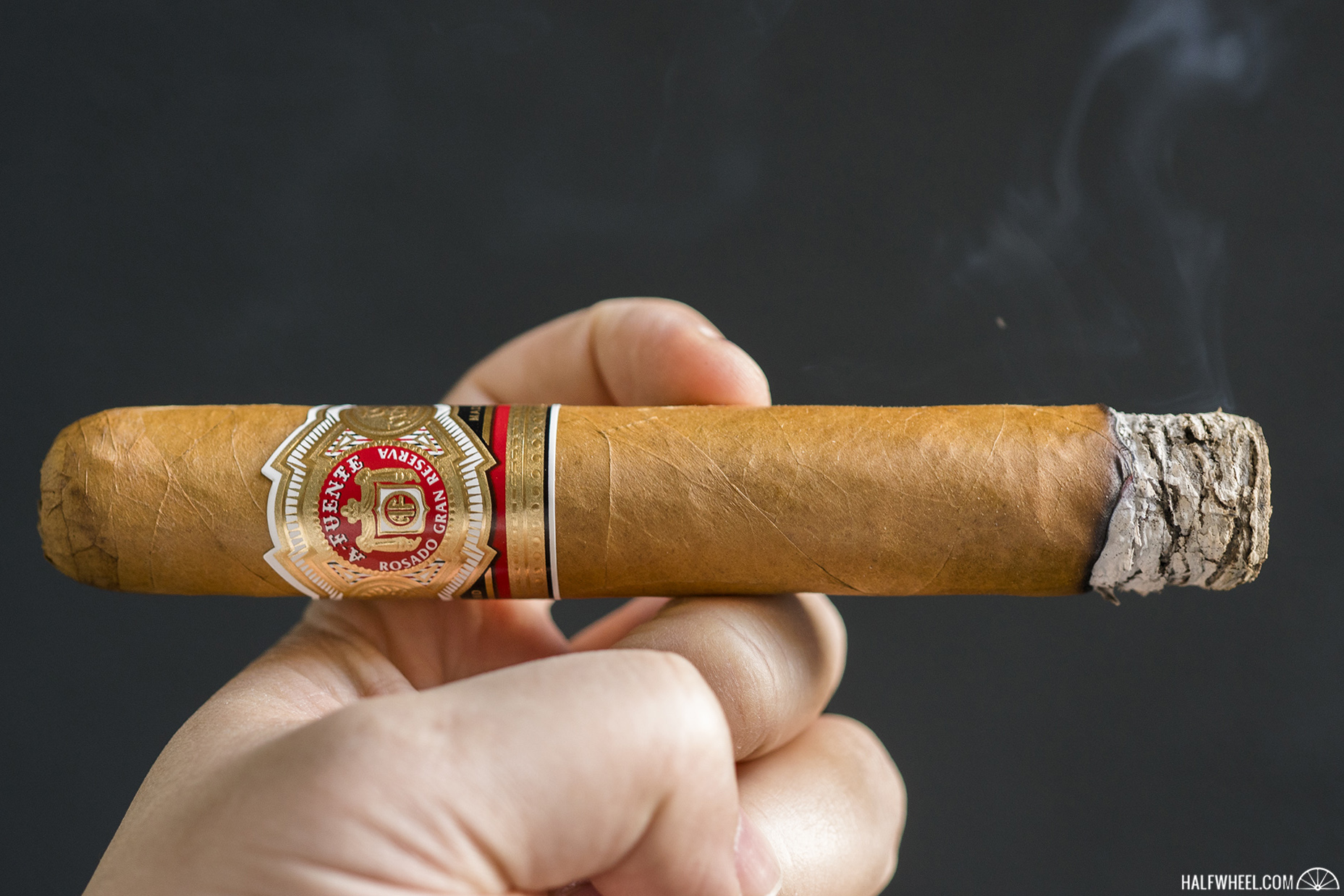 While lemon and bread become the main flavors in the mouth, the strongest flavor in the second third of the Arturo Fuente Oro Magnum R Super Sixty is toastiness, which shows up a few seconds after the smoke leaves the mouth. The finish now has more of creaminess and minerality, though one sample has a Champagne-like fruitiness on the finish. Of note, the saltiness is completely gone from the retrohale. Flavor and body are both medium-full, while the strength remains medium-plus. Construction remains great. 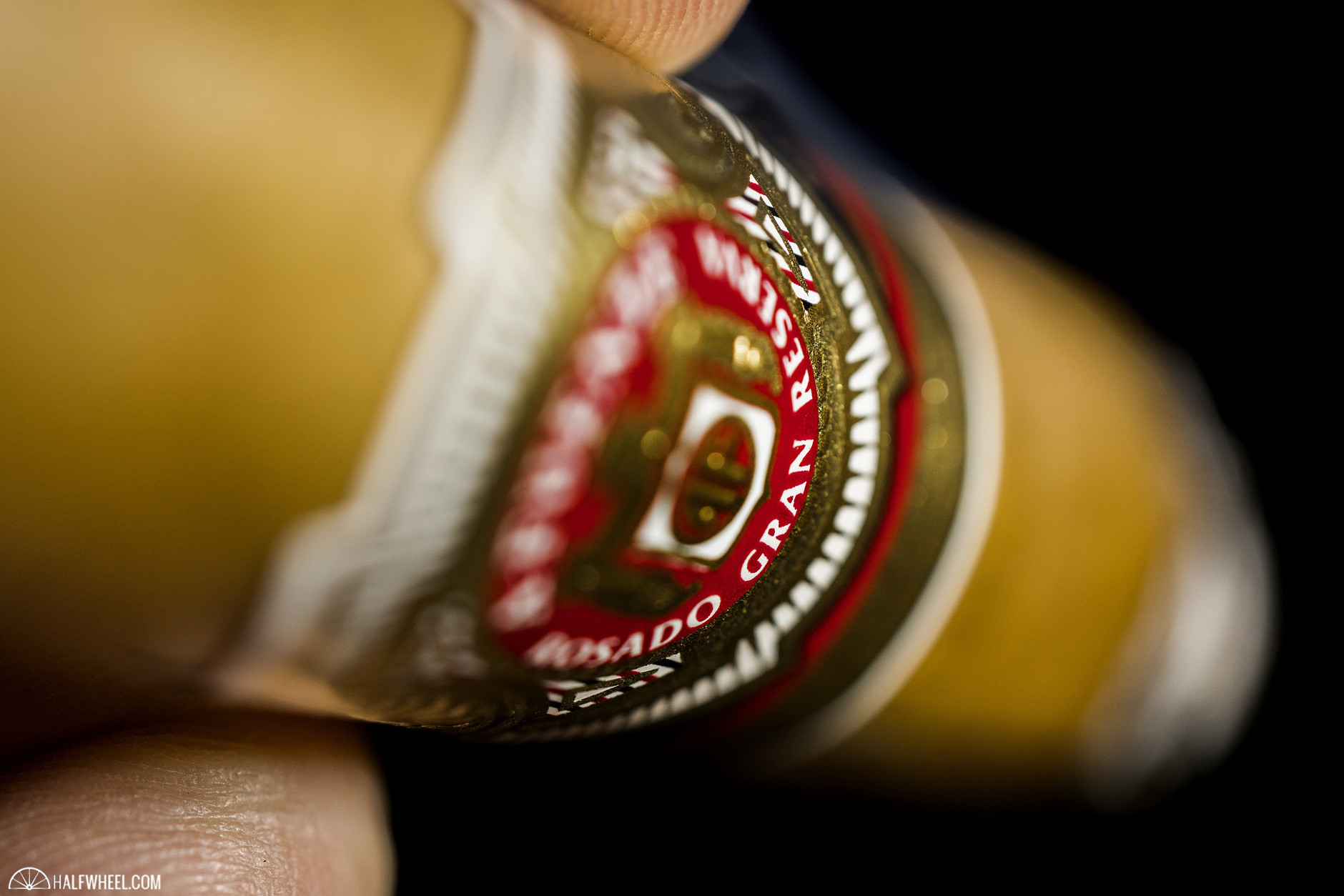 The creamy and mineral flavors take over the profile, but overall the Super Sixty isn’t as smooth as it was in the second third. Earthiness is still present, but it’s nowhere close to where it was in the first third. Retrohales produce dry nuttiness, minerals, nuttiness, breads. The cinnamon in the back of the throat has now transitioned to more of a red pepper flavor, lingering in a similar manner as it had for basically the entire cigar. Flavor finishes medium-full, body is full and strength is medium-plus. Unfortunately, each band I removed also took a fair bit of the cigar with it and that affected the smoke production and burn rate. 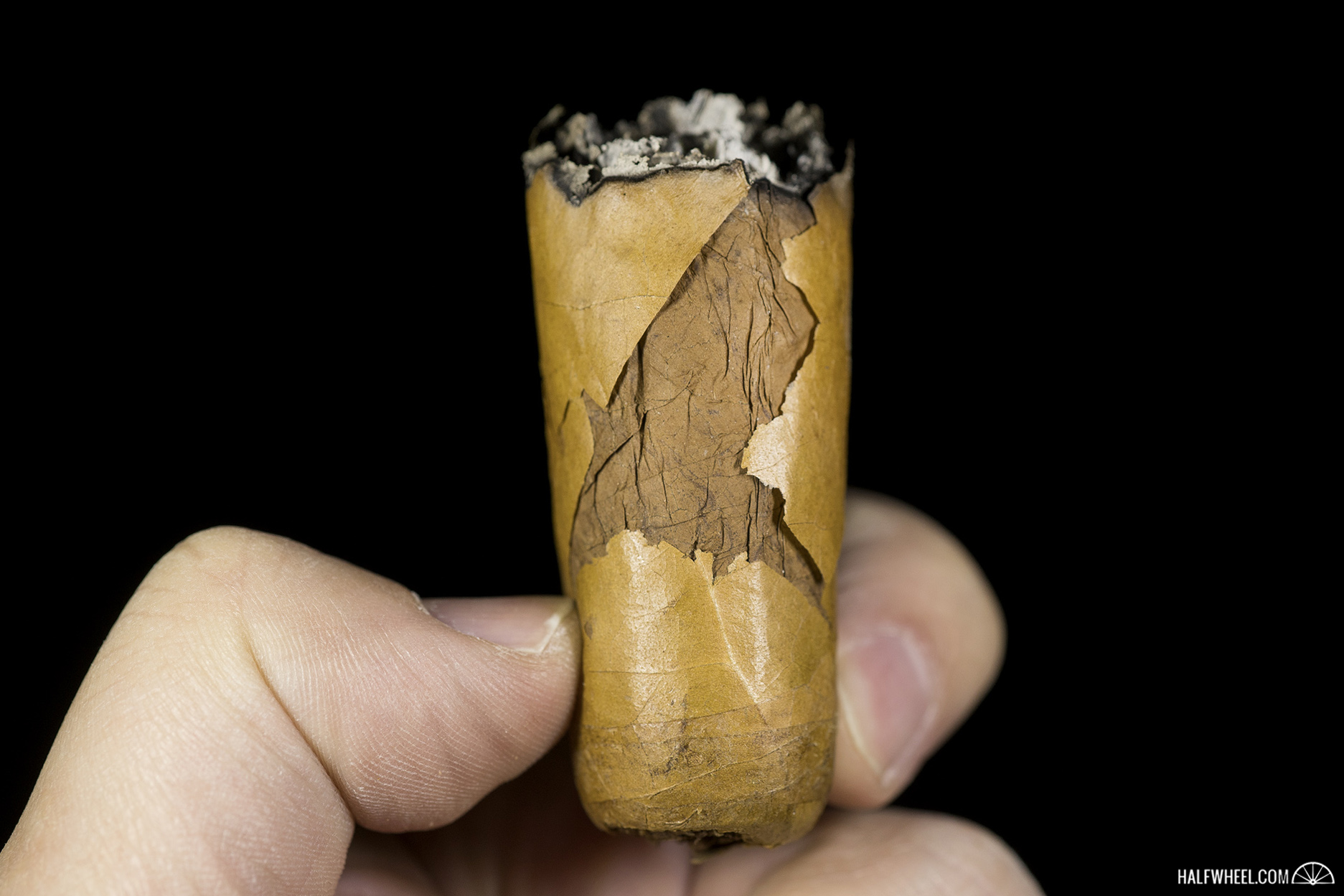 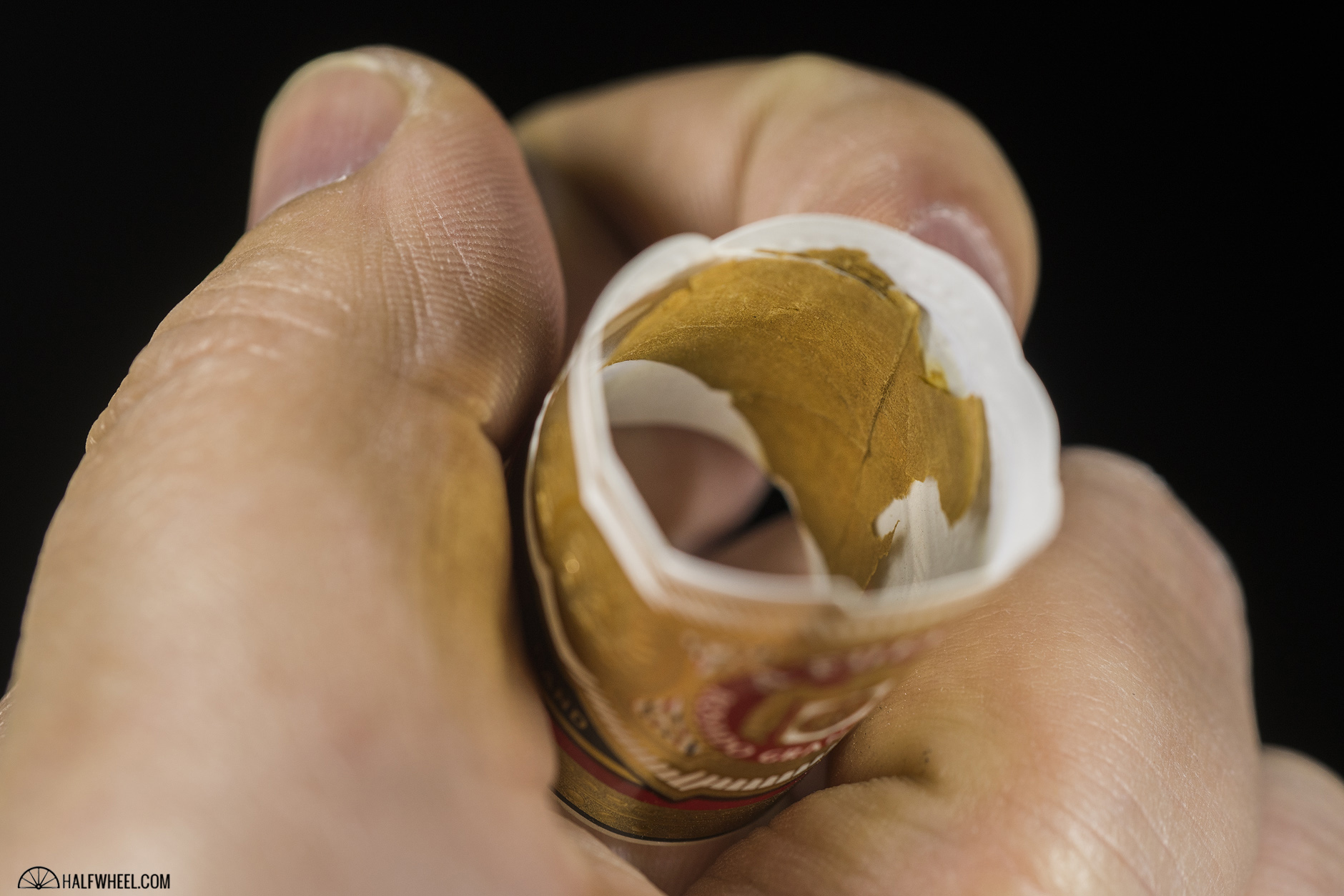 I’d love to see this in a couple more sizes to give some thoughts on whether I think the Magnum R blend is any better with an Ecuadorian Connecticut wrapper. Perhaps more importantly, I’d like to be able to smoke this cigar without the band removal completely destroying the final third. I feel pretty confident that the Arturo Fuente Oro Magnum R Super Sixty would score higher if it had been shipped without a band as the final third’s construction issues seem like they were directly related to the issues created by taking off the cigar’s band. I still think this is a good cigar and for $12, a small value given the large size but it’s very challenging to make any declarative statements about this particular blend given the three cigars I smoked.