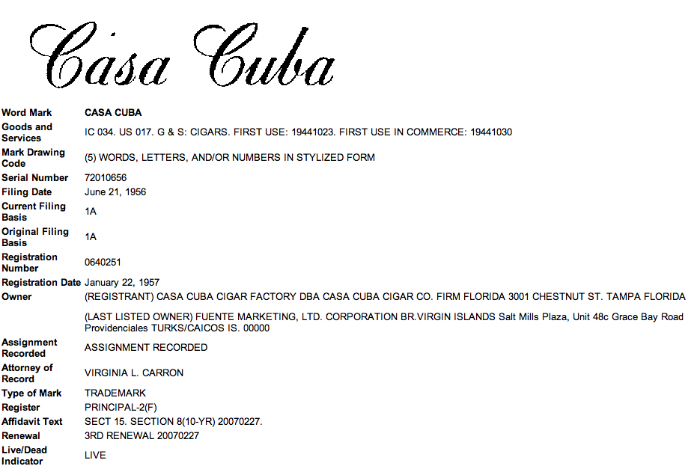 And the new Fuente line is… Casa Cuba. It’s long been rumored that Fuente would have a new line in the coming year and they dug deep in the family archives and have revived a name that is over a half-century old. Not much is known about the blend, pricing or sizes, but rumors suggest three sizes. History of the storied Ybor City name and more Fuente IPCPR news after the jump.

The Casa Cuba trademark was filed in 1956.

The brand has roots with the Maseda family:

Jose Maseda was a well-known figure in the local cigar industry. He started in Key West and later moved to Tampa where he worked in several different factories before starting his own small cigar business called Jose Maseda Cigar Company. These small cigar-making businesses were referred to as “buckeyes” or better known as “chinchales” in Spanish. One of his early cigar brands was called Cardinal Richelieu which was originally registered in 1895 and acquired by Jose in 1921. Jose’s oldest son, Santiago “Modesto” Maseda took over the family business shortly before his father’s death in 1939. The buckeye was a separate structure located behind their home at 3001 Chestnut Street, Tampa, Florida.

His wife Zoila, also a cigar maker, was his partner and a vital part of the cigar business. Over the years, their cigar brands consisted of Casa Cuba, Oro de Cuba, Don Modesto, and LA ESTAMPA under the company name of Z. Garcia y Cia., which was Zoila’s maiden name. The company’s name was eventually changed to Casa Cuba Cigar Company which was incorporated on January 20, 1960. The company was dissolved on October 21, 1974 shortly before Modesto’s death in 1978. The cigar brands were then purchased by the Arturo Fuente Cigar Factory in the late 1970’s.

Most recently the Casa Cuba was available in the late 1990s as a Holt’s exclusive. Currently, Tampa Sweetheart’s offers a short filler called, “Casa Cuba Habanitos“, but this is not the blend that will be released at IPCPR.

The Casa Cuba will be a B&M only cigar and Fuente plans to prevent online sales. In other Fuente IPCPR news, the rumor is true, the Short Story Maduro will be available at the show. Retailers who purchase ten boxes of other Fuente product will have an opportunity to purchase one box of Short Story Maduros. This is a common practice, last year Fuente offered a box of 858 Sun Growns to accounts purchasing twenty boxes. — el nino diablo.