In October 2011, Prometheus released a limited edition version of its Angelenos blend in conjunction with actor Joe Mantegna.

Dubbed the Angelenos Limited Edition 2009 Robusto Gordo JM, the 5 1/2 x 54 robusto extra was the only box-pressed vitola in the line, and had a retail price of $9.95. In addition, part of the proceeds of each of the Robusto Gordo JM were donated to the Barbara Sinatra Children’s Center, which helps physically and emotionally battered children.

Here is what I said in my original review back in November 2012:

I get the feeling that most people have heard of the Angelenos brand, they probably have not actually tried one. Well, I have smoked every vitola of the Angelenos at one time or another, a while it is mostly a solid line, none of them compare to the Robusto Gordo JM. The limited edition version has more flavor, is noticeably better balanced and is just a better cigar overall than the rest of the cigars that share its name. The profile is very well balanced, the construction is very good other then the slightly wavy burn and the flavors compliment each other quite well. Considering the other cigars in the lineup, I was extremely surprised at how much I liked this cigar, and will definitely be getting some more.

Unlike the rest of the regular production vitolas in the line, there were only 12,400 of the Robusto Gordo JM released in two different packaging options: 400 boxes of 25 cigars and 100 jars containing 24 cigars.

The wrapper on the Angelenos Limited Edition 2009 Robusto Gordo JM is light mocha brown silky smooth to the touch, with a touch of oil present. Quite a few veins are visible, but not distracting and there is an obvious box press. The aroma from the wrapper is a combination of strong cedar, manure, creamy peanuts, leather and chocolate while the cold draw brings flavored of same aged cedar, almonds, vanilla, earth and pepper.

The first thing I notice after lighting up the Angelenos Limited Edition 2009 Robusto Gordo JM is a great combination of maple sweetness and white pepper on retrohale, while the palate is dominated by flavors of creamy cedar, peanuts, hay, leather and earth. There is a bit of a bitter espresso note on the finish, but it is fairly slight for the most part, and does not get any stronger during the first half. The maple sweetness recedes a bit after the halfway point, becoming more of a background note, while the creamy cedar and peanut combination easily takes over the dominant spot. Other flavors of dark chocolate, hay, earth, leather and a touch of citrus flit in and out, while the bitter espresso note on the finish from the first third does become a bit more obvious, especially near the end of the cigar. 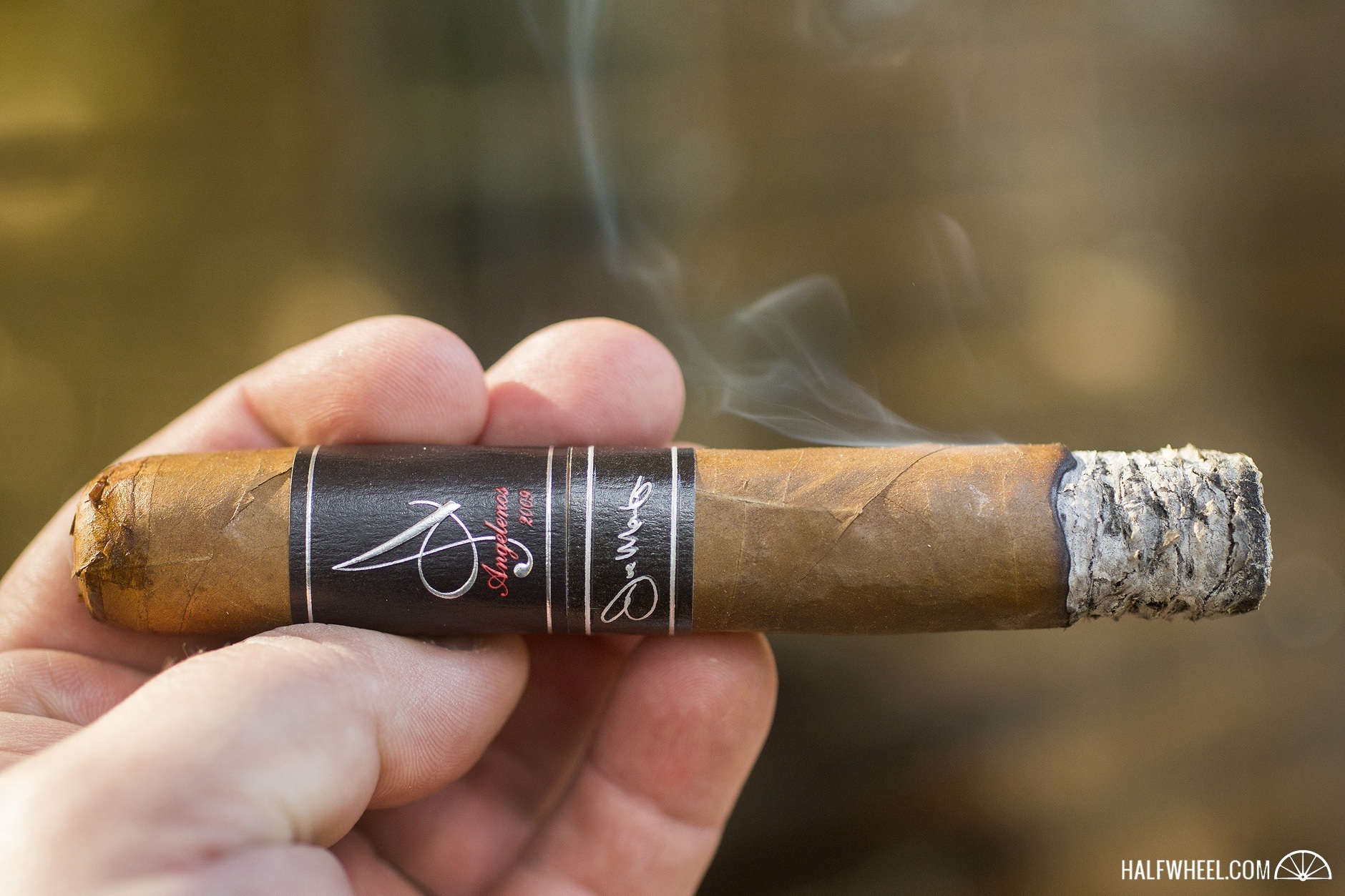 Construction-wise, both the burn and draw are excellent from beginning to end, with the razor sharp burn being the standout in that regard. There is plenty of dense, white smoke coming from the foot, band while it is an above average amount, it is far from over whelming. The overall strength starts out fairly mild in the first third, but quickly ramps up to a sold medium by the end of the second third before stalling out slightly above the medium mark by the time I put the nub down one hour and 35 minutes after I started.

I have smoked at least one of Angelenos Limited Edition 2009 Robusto Gordo JM every year since my original review in 2012, and while the profile has remained fairly consistent during that time, I am noticing that the maple sweetness that was so prevalent the first time I smoked it has steadily decreased in strength, especially in the final third. The flavors and construction are still great, and it is still a winner, easily worth searching for and buying if you can find them.