When I was a child, one of my favorite games to play was the “find the difference” puzzles in the newspaper. There’d be two similarly drawn images, but the time on the clock would be different, a person would have their watch on the other wrist, and so on. Whenever I found all seven, I felt like a genius, and anything less than that was a source of real frustration.

I bring that up because I was wondering exactly why I was getting another Anastasia to review, as it’s a cigar I remember buying several times over the past couple of years. So I stared at it, much like I did those puzzles, trying to figure out just what was different, except I didn’t have an original release of the Anastasia handy with which to compare it.

Turns out, it’s the secondary band, and in particular, the fact that it is yellow, as opposed to previous versions that have been green or blue.

Editor’s Note: Robert Caldwell told halfwheel the line’s official name is simply “Anastasia.” Caldwell has not only used this name before but also these vitola names. For example, in 2016, there was another “Anastasia Kartel” released that is neither the same blend nor listed as the same size. Caldwell told halfwheel that the adopted name for this line is “Anastasia Yellow Label” which is what we are using to help better delineate between the two releases. — Charlie Minato.

The Anastasia line dates back to June 2016, when Robert Caldwell and at least one retailer shared pictures of the cigar on Instagram. That line, which wore an olive green secondary band, was made by Ernesto Perez-Carrillo Jr. at Tabacalera La Alianza S.A. in the Dominican Republic, and like this version, no blend details were disclosed. The cigar was meant to be the follow-up to Caldwell’s The Last Tsar and features an image of Princess Anastasia, daughter of Nicolas II, the Tsar of Russia on the band of The Last Tsar.

In 2018, the line returned but wore a blue band and used higher-priming tobaccos than its predecessor. In March 2022, Caldwell Cigar Co. released the Anastasia Añejado 2016, cigars that wore a white secondary band and were rolled in 2016 but were not the same blend as that first release, nor was it made at Tabacalera La Alianza S.A.

This newest Anastasia is being released in four vitolas:

Each of the vitolas is getting 750 boxes, making for a total run of 75,000 cigars across the four sizes. I really like the aged look of the bands, as they play into the vintage portrait as well as the 1918 date on the side of the main band. The wrapper seems to have just a bit of a reddish tone to it, though the more I look at it, the more I wonder if the maroon portions of the band aren’t influencing my assessment. It’s a shade of brown that is right around the midpoint of the scale, a bit of a woody color with little oil present. There’s a bit of fine grit that provides some texture for the fingers, while veins are small but noticeable due to the color becoming a bit lighter around them. The cigar is rolled fairly firm, with only an occasional spot allowing for a slight bit of give; when I do find those spots they are above the band. The cap seems just a bit big for the cigar, something I notice as it drapes over the shoulder in spots, though it’s not a detractor. Aroma from the foot is quite interesting, initially making me think of something with a bit of apple cider vinegar in it, with more emphasis on the apple cider part than the vinegar. The more I smell the foot, the more that apple note evolves, as next it makes me think of apple pastries, though it never quite leaves the impression of an actual red apple. Even with that, I wouldn’t characterize the foot as being overly sweet. There isn’t much in the way of pepper, and what is there combines with a slightly damp lumber. The cold draw is more muted and restrained with its flavors, offering a hint of apple pie, though I get more crust than filling. Pepper is equally mellow here, with air flowing consistently well across the three cigars.

The Anastasia Kartel opens up quite well with a bit of black pepper along with some freshly cut, bark-covered wood, and the potency can be increased with retrohales that turn up the intensity a few ticks. I’m not sure if I should be surprised that the apple flavor isn’t here, but either way, it’s not. There’s a shift to include a bit of toffee popcorn by the half-inch mark, notable not just for the flavor but also a change in the texture of the smoke. While retrohales are fairly mellow in the first inch, offering just a bit of light pepper for a slight tingle, one of the three cigars has a much more potent retrohale. All three cigars see the increase after I knock the first clump of ash off and take a bit fuller puff. While the flavor has mellowed just a bit at the end of the first third, I find myself quite pleased with what it has had to offer thus far, an earthy and peppery profile with touches of toffee sweetness. The profile has shown impressive balance if not always a lot of complexity and has me eager to see what is next as a bit of warm apple pie wafts into my nostrils as the cigar rests. Construction and combustion have both been outstanding. Flavor in this section is medium-plus, body is medium, and strength is mild.

While the first third of the Anastasia Kartel is around the medium mark and marked with touches of thick sweetness, the second third quickly ousts that sweetness in favor of more vibrant black pepper, light earth and supporting woods. The retrohale is where the most prominent change occurs, as what had been a gentle tickle is now a more assertive stimulation of the nostrils. There is also a bit of smokiness emerging, not far off the first smells from a recently lit fireplace. Even with that, I still find myself retrohaling the cigar on nearly every other puff, as the combination of regular puffs and retrohales go hand-in-hand. There are a few brief spots where that freshly lit fire aroma combines with fresh firewood and a bit more of the toffee from earlier, with the combination in one cigar quite possibly some of the best five minutes I’ve gotten from a cigar in some time. It’s just past the midpoint when the cigar makes one of its more notable changes, becoming a bit smokier and developing a rockiness to the earth at the base of the profile, which in turn helps it rise up and become a more active contributor to the profile. That profile carries the cigar through the rest of this section, moving it back to a medium-plus profile, while the body feels closer to medium and strength sits just shy of medium. Construction and combustion remain fantastic. 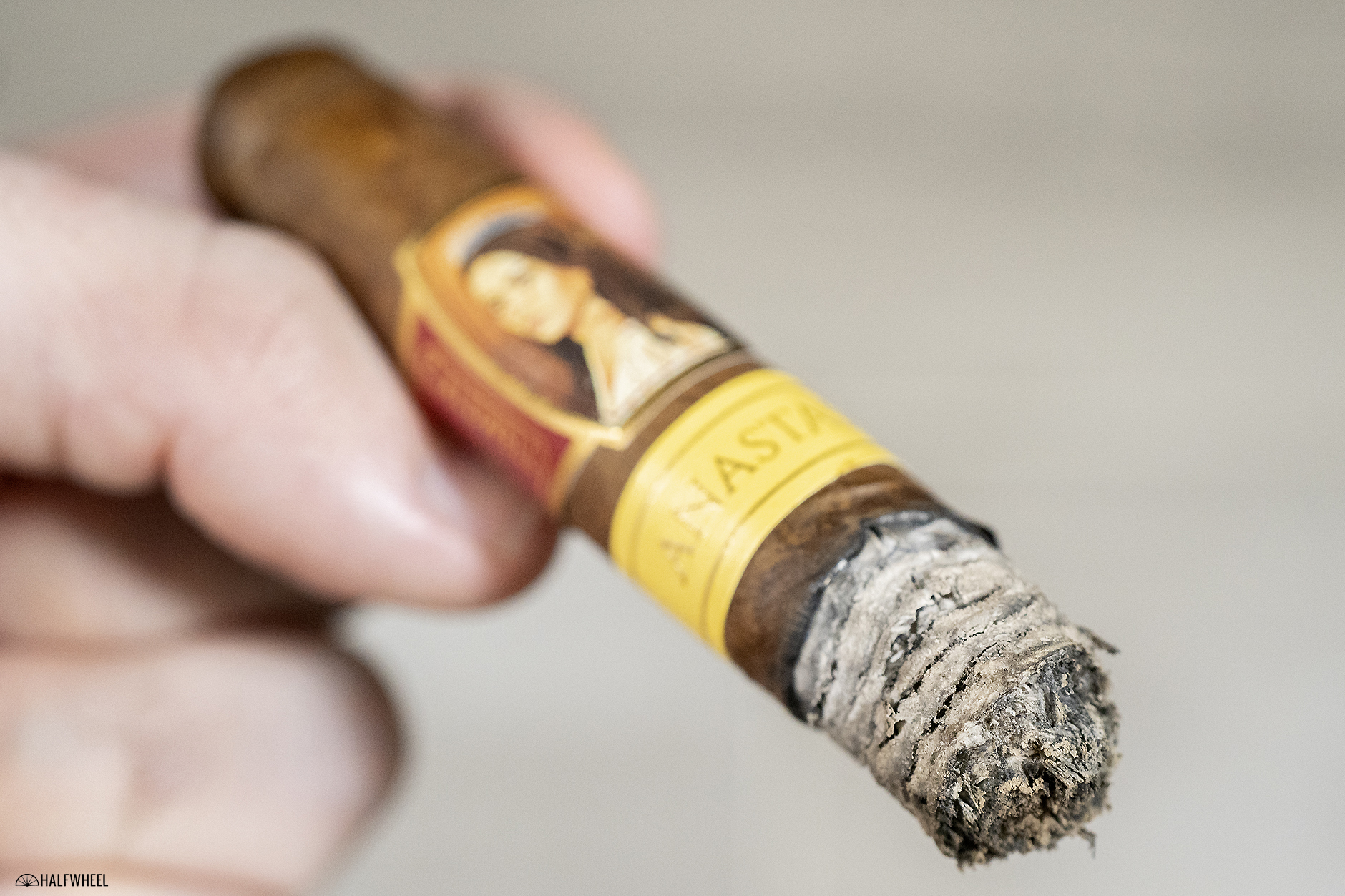 The final third starts by showing just how far the Anastasia Kartel has come, as it starts off with a bit of char added onto the black pepper, creating a sensation that goes right to the front center of my tongue. One cigar, the most flavorfully dynamic of the trio, sees the final third also bring about a bit of throat irritation. There is not much in the way of change that I can pick up, and in one cigar, trying to pick up anything beyond the increasing smokiness, char, and peppery earth seems like a task done in vain. In the first cigar, the Anastasia Kartel begins its conclusion with a big hit of peppermint, almost as if someone hid an Altoids mint in the middle of the filler, as when I take a puff I get a head rush similar to the breath freshener. It’s something I only pick up once, and it helps it score a bit higher than the other two cigars. Construction and combustion continue to be nearly flawless. Flavor finishes between medium-full and outright full, body is medium, and strength peaks at medium. 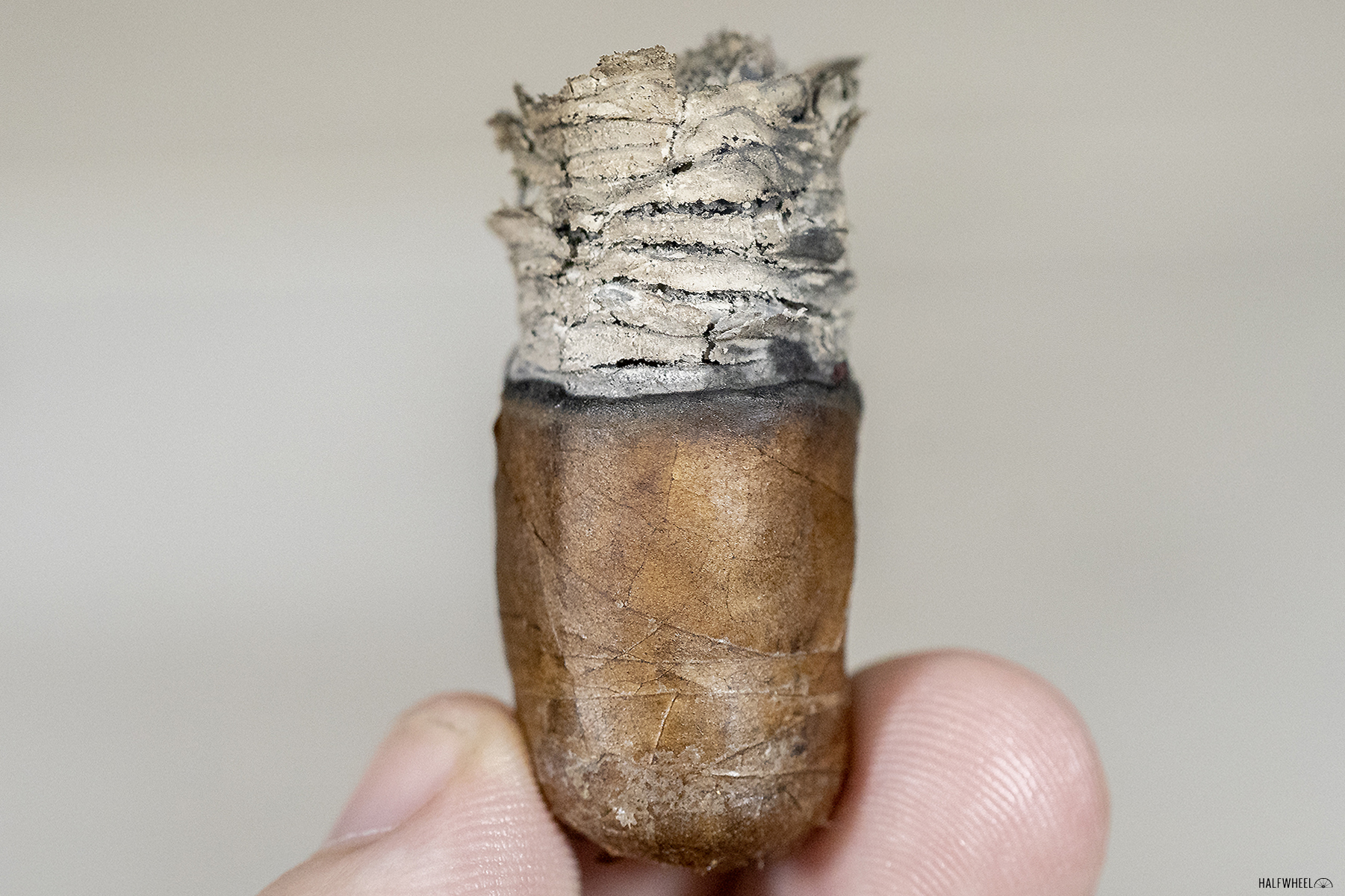 While I'm not crazy about the price, I am quite enamored by this newest version of the Anastasia, as it offers some impressively enjoyable puffs, rich aromas, and a distinct flavor journey from start to finish. The construction and combustion are also fantastic, which delivers a cigar that is very easy to enjoy, if occasionally hampered by a final third that can get a bit much for my palate. If you've enjoyed previous Anastasia releases, this should be a no-brainer cigar to pick up, assuming price isn't too much of an obstacle.