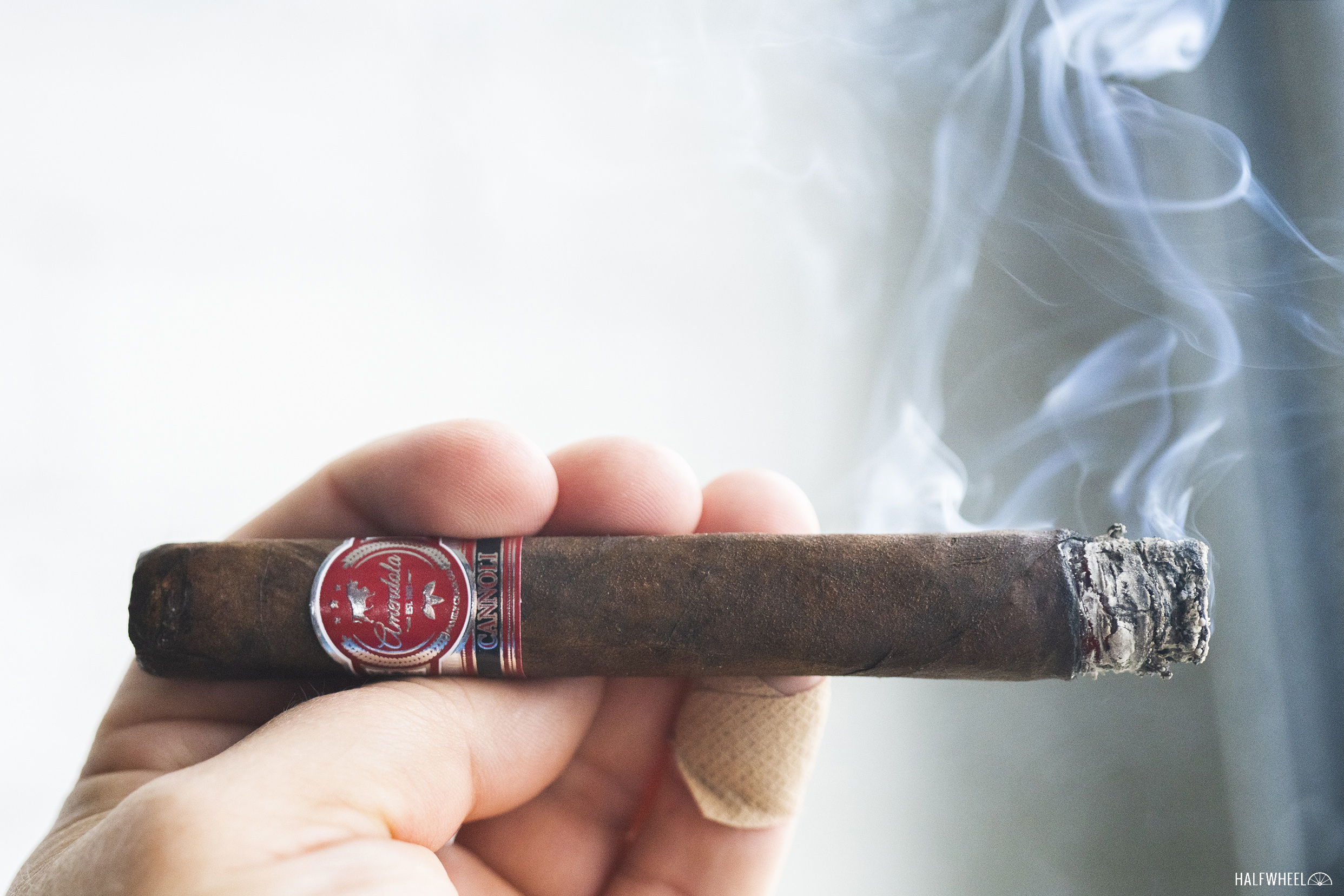 In June 2020, Amendola Family Cigar Co. announced it would be moving production of its entire portfolio out of Tabacalera Kafie in Danlí, Honduras to a combination of different Nicaraguan factories, a group that would eventually include AGANORSA Leaf’s Tabacos Valle de Jalapa S.A. factory, La Zona Cigar Factory, and both of AJ Fernandez’s factories.

As part of the move, Amendola announced a new line of cigars under its Signature Series being produced at La Zona that are designed to be paired with coffee or after-dinner drinks, like a dessert. The first release in that series was Cannoli Red—the name is a reference to the company’s founders’ Italian-American heritage—a 5 1/2 x 42 box-pressed corona vitola made up of a Mexican San Andrés wrapper covering Nicaraguan tobacco used in both the binder and filler. The cigars carry a retail price of $9 each and debuted in December 2020 packaged in 20-count boxes.

“The Cannoli Series is a special project for Jeffrey and me,” said Christopher Monaco, principal of Amendola Family Cigar Co., in a press release. “We made a promise to incorporate our Italian-American heritage into every blend we create.”

The Cannoli Red was followed by the Cannoli Green, which is made up of a Sumatran wrapper along with a Nicaraguan binder and Nicaraguan fillers, and the Cannoli White, which is covered in an Ecuadorian Connecticut-seed wrapper. Both of these were released in May featuring the same 5 1/2 x 42 vitola and $9 MSRP as the Cannoli Red. Visually, the Amendola Signature Series Cannoli Red is covered in an extremely rustic and mottled reddish brown wrapper that is fairly smooth to the touch but covered in large, protruding veins. There is very little oil present and it is nicely spongy when squeezed, while the box-press is easily discernible. The aroma from the wrapper is a combination of leather, dark chocolate and oak while the foot smells of hay, generic wood, peanut shells, fondant and raisin sweetness. The cold draw brings flavors of dense creamy oak, sweet hay, cocoa nibs, espresso beans and generic nuts along with a touch of both black pepper and vanilla sweetness.

Starting off, the Cannoli Red features some slight spice on my tongue—though it begins to dissipate almost immediately—along with a primary combination of rich espresso beans and dark chocolate, interspersed with secondary flavors of creamy oak, hay, barnyard, leather, peanuts and slight citrus. The vanilla sweetness from the cold draw is present on the retrohale along with some black pepper, but neither are very strong at the moment. Construction-wise, the draw is excellent after a simple straight cut and the smoke production is about average off of the foot, but the burn has some minor issues almost immediately, causing a quick correction. Body is close to medium while the strength starts out closer to the mild mark, it does begin increasing by the time the first third comes to an end.

The combination of espresso beans and dark chocolate along with some black pepper remains on top of the profile during the second third of the Amendola, but the vanilla sweetness that was present on the retrohale in the first third has all but disappeared from the profile by the halfway point. Additional notes of gritty earth, oak, generic citrus, leather tack, nuts and slight vegetal flit in and out at various points, while the spice that was present on my tongue is long gone, never to return. In terms of construction, the draw continues to give me no issues and the burn has evened up nicely, while the smoke production is about average coming off of the foot. Strength-wise, the Amendola Signature Series Cannoli Red increases a bit, but falls just short of medium by the time the second third ends. Unfortunately, the final third of the Signature Series Cannoli Red is full of the same flavors as the previous thirds: coffee beans and dark chocolate continue to be the main flavor combination, followed by leather, earth, hay, peanuts, toasted bread and slight cinnamon. My hope that the vanilla sweetness—or really, any sweetness—would return to the retrohale was sadly in vain, but some black pepper does remain until the end of the cigar. Both the burn and the draw continue to give me no problems, but the smoke production has seemed to wane just a bit, although it is still within normal levels. Finally, the strength manages to increase enough to hit a point just over the medium mark as I put the nub down with about an inch remaining. 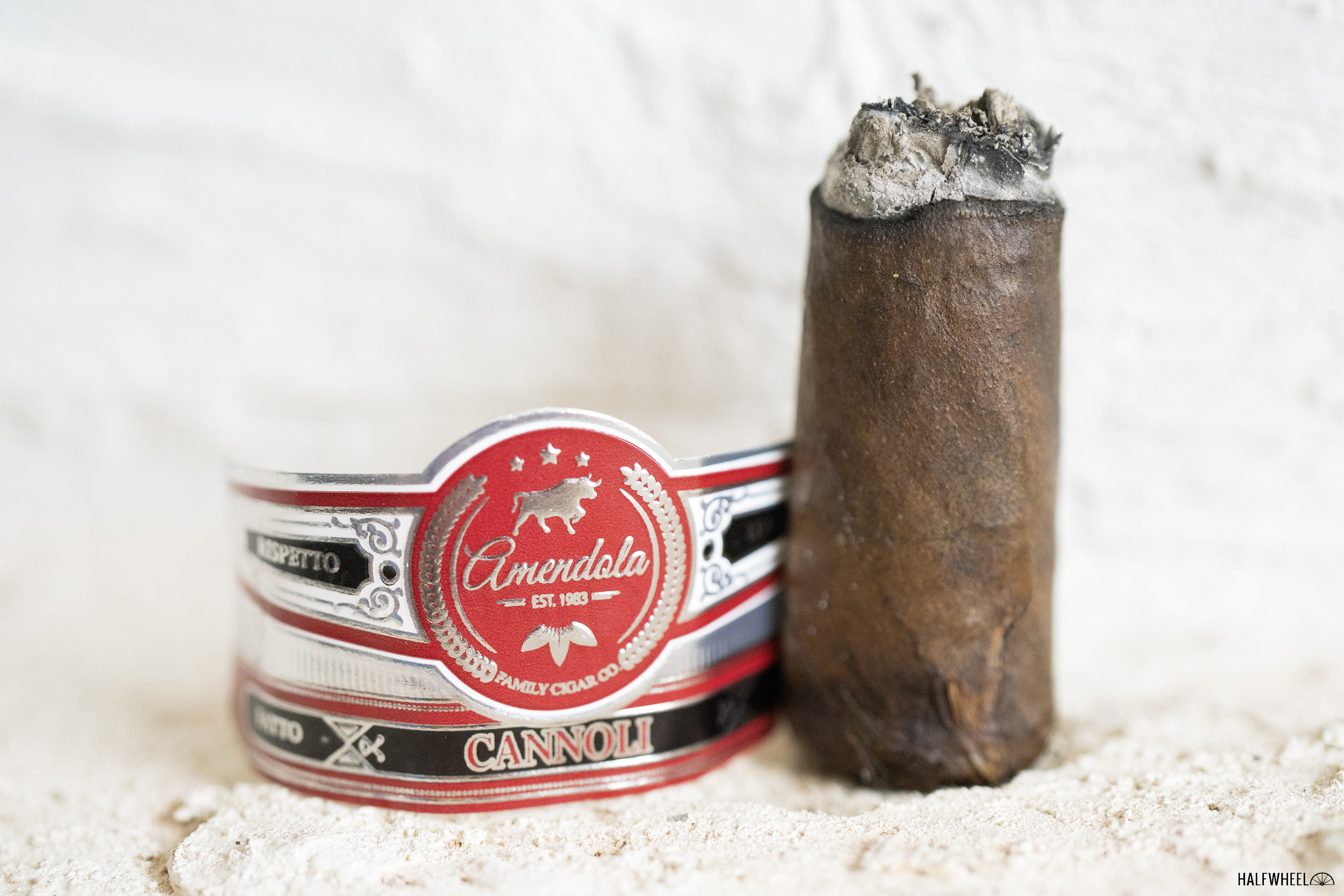 From what I recall, I have not smoked many—or any—Amendola cigars before. While the Signature Series Cannoli Red is an enjoyable introduction to the brand, it is not without its issues. The blend is very linear, with espresso bean and dark chocolate notes easily topping the profile from the first puff to the last. While there was some nice vanilla sweetness in the first third, that flavor completely disappeared around the halfway point. Construction is decent overall—the excellent draw is the high point in that regard, as each of the samples had to be touched up at least once—and the strength is well-integrated, but those looking for massive complexity or significant flavor transitions will not find it here.