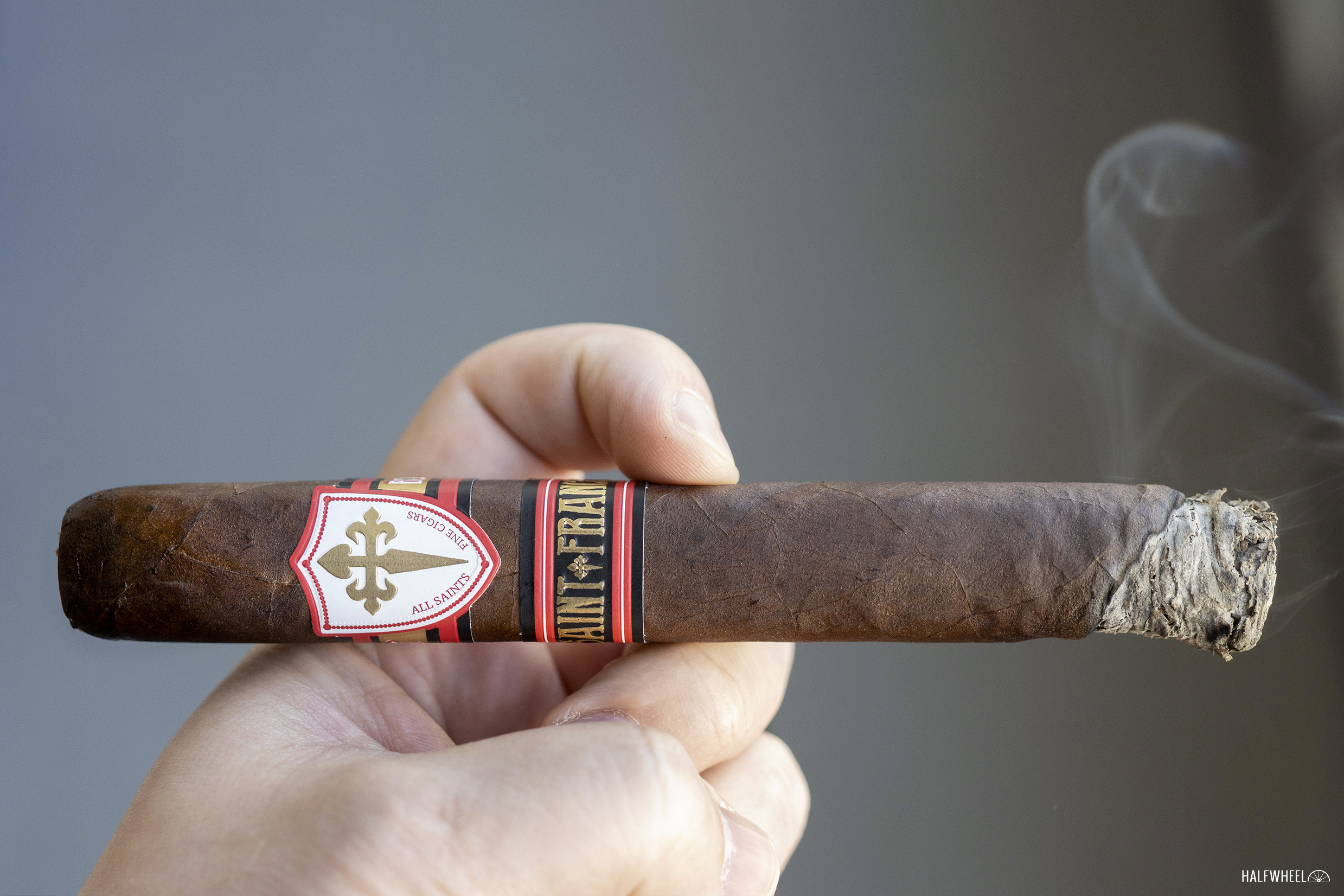 Ahead of Tobacco Plus Expo 2021, All Saints Cigars announced that it would be adding a second line to the company’s portfolio. This line—unlike the company’s first line and its limited edition Solamente—is actually named after a saint.

This time it’s Francis of Assisi, one of the most famous Catholic saints. Francis is best known for founding the Franciscan Orders, a group of three different Catholic orders, including the Order of Friars Minor, who are known as Franciscans. In addition, he is also known as being the patron saint of animals and ecology, as well as one of the patron saints of Italy.

As for the cigar line, it’s a four-vitola line that uses an Ecuadorian oscuro wrapper over a Nicaraguan binder and fillers from Nicaragua. Like the company’s debut Dedicación line, it is made at Rocky Patel Premium Cigars, Inc.’s TAVICUSA factory in Estelí, Nicaragua.

It’s offered in the same four sizes that the Dedicación line debuted with, though the names have been changed for some of the sizes. 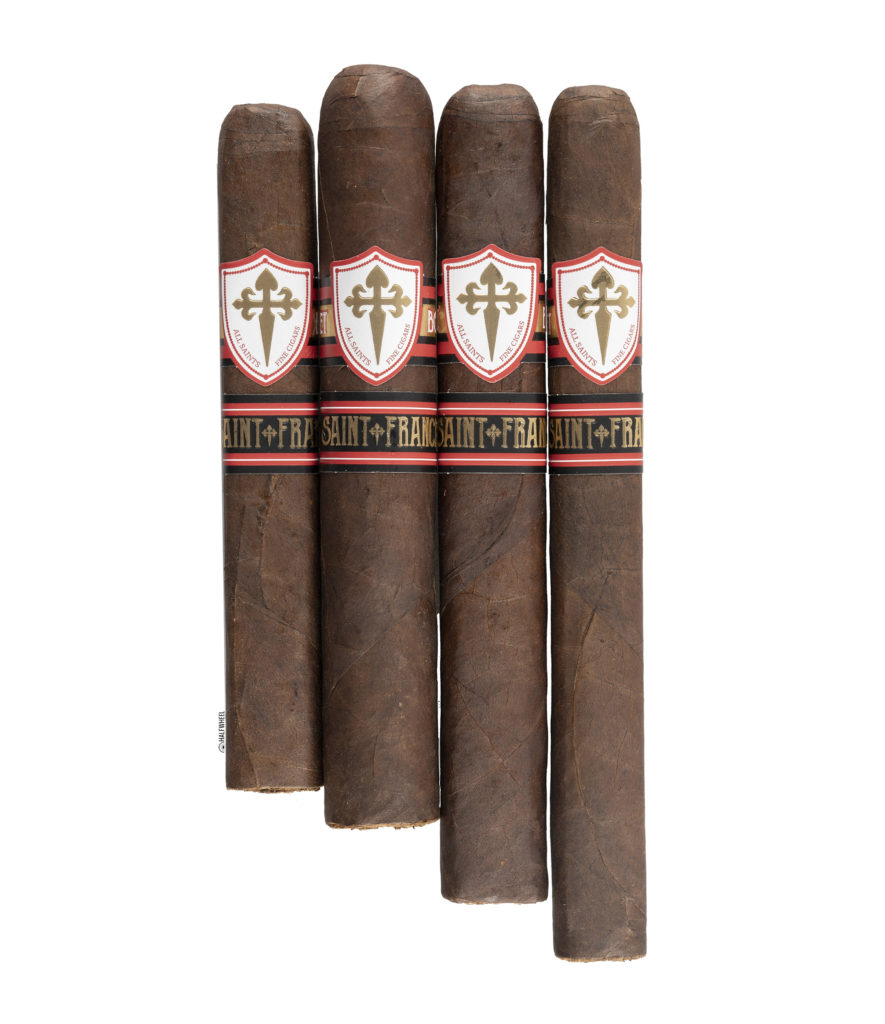 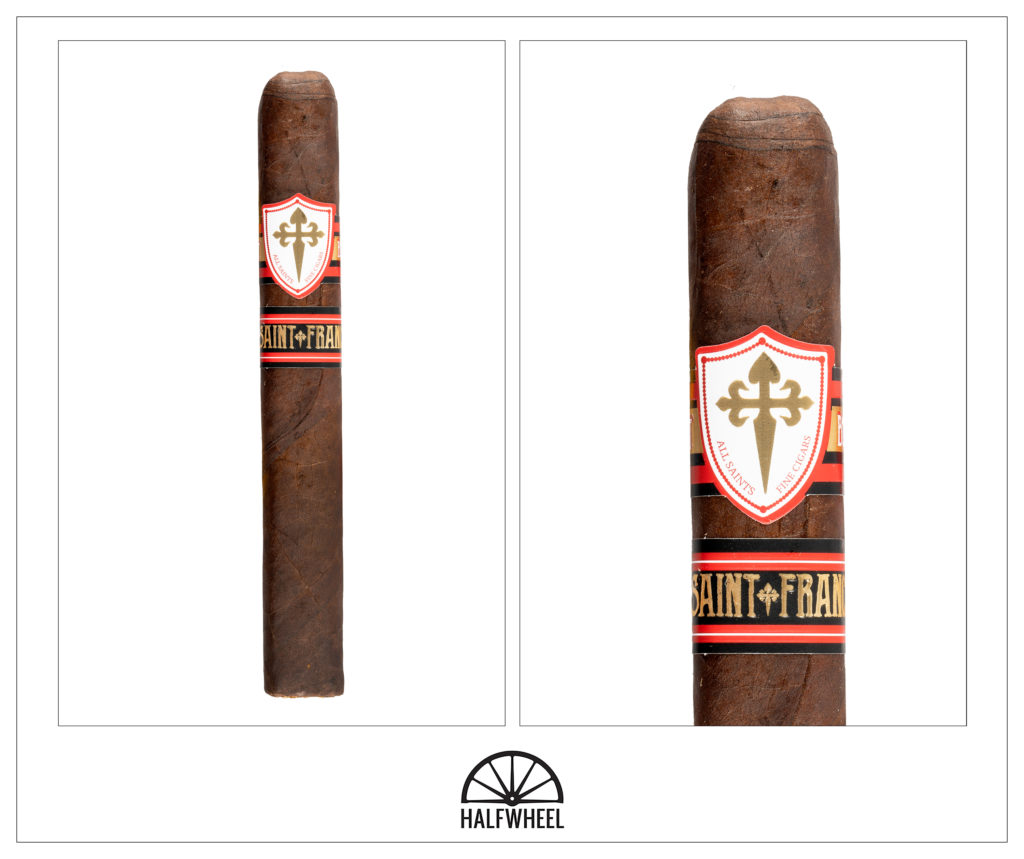 This is a very dark cigar, though it’s not an uncommon look, particularly with the rectangular box-press that gives the cigar its chocolate bar-like appearance. Furthermore, I think All Saints did a good job with the bands’ color schemes, particularly the red. Once I remove the cigar from cellophane, but before I bring it closer to my nose, I get a whiff of a manure-heavy barnyard scent. As I go to smell the cigar, the barnyard only becomes stronger, though intertwining itself with some cocoa. Underneath, there’s some graham cracker sweetness, but the barnyard overwhelms it. Because I once again pick up the cocoa and graham cracker but not the barnyard scent, the foot smells much sweeter. There are also scents of bread, copy paper, roasted pecans and some root beer. Each of the three cigars has a cold draw that is tighter than I was expecting. I’d say it’s on the tighter side of “slightly tight,” certainly far from where I feel like the cigar isn’t going to have a chance to perform well, but it’s noticeable, particularly for a box-pressed cigar. The All Saints St. Francis Toro has a balance mixture of cocoa, barnyard, hazelnut pralines and tartness.

I’m not surprised to find the barnyard sensation reemerging once the smoke of the All Saints St. Francis Toro first hits my palate. Quite frankly, I find the sensation before I even take a first puff as just brining the cigar close to my head brings another whiff of the barnyard aroma. Other flavors include leather, a mineral sensation, creaminess and a faint underlying sweetness. After about 10 minutes, the barnyard sensation has given way to a deep earthy flavor for the top spot in the profile. It’s a complementary flavor, but I’d say the cigar is more earthy than barnyard. Behind the two are brown mustard and a sweet gingerbread flavor. The finish has notes of cereal, gingerbread, white pepper, spices and an inconsistent creaminess. Retrohales have citrus flavors, pizza crust, toastiness and a vibrant black pepper. That black pepper sticks around during the finish, followed by a damp earthiness, rye whiskey and a bit of harshness. Flavor is medium-full, body is medium-plus and strength is medium-plus. Construction-wise, I’m not sure what to make of the All Saints St. Francis Toro. On one hand, I don’t think anything rises to a level where I should be deducting points. On the other hand, the draw is slightly tight and one sample is burning super slow. The ash is quite flaky on each cigar and is creating a mess. 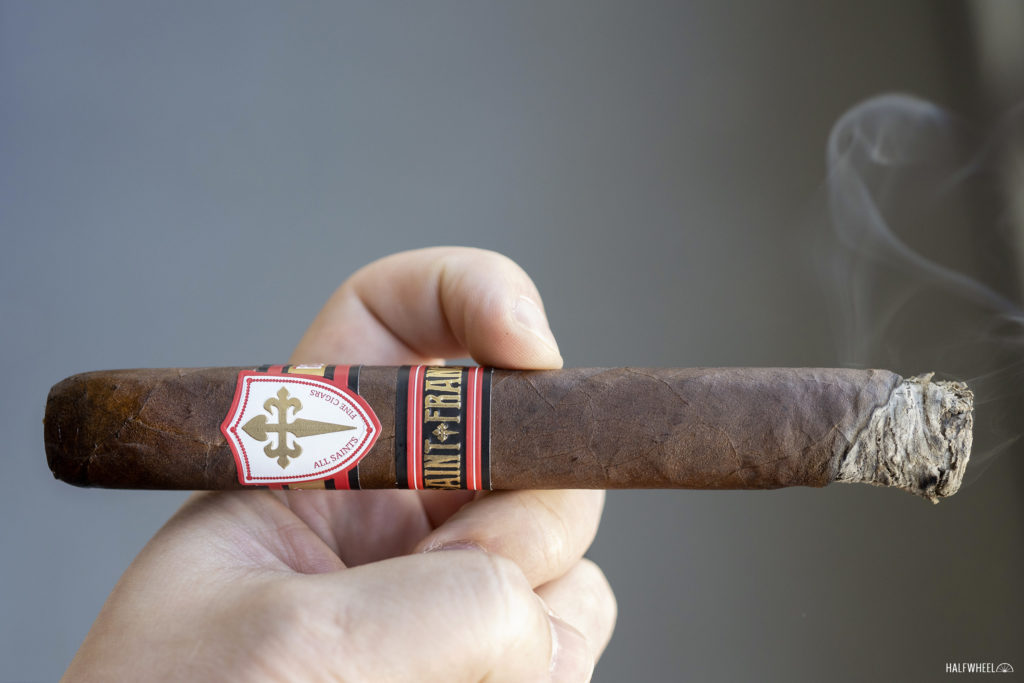 Somewhere around the halfway mark of the All Saints St. Francis Toro, the cigar suddenly tastes like Frito’s. I pay attention to the cigar, though not every puff, and I had been waiting for the All Saints St. Francis Toro to show some change, and I’d count this as a change. Beyond the vibrant Frito’s flavor there’s earthiness, creaminess and some underlying sugar. The finish is similar, though the Frito’s sensation is reduced. Creaminess and earthiness stick around, now joined by sensations that remind me of popcorn and oregano. Retrohales are a bit more normal for a cigar: bread, leather, sugar and burnt coffee. Once the smoke leaves my nostrils, I find things a lot toastier along with bread and burnt popcorn. Flavor is medium-full, body is medium-plus and strength is medium-full. While I might have avoided point deductions for construction during the first third, the draw is still tight and touch-ups are now becoming a thing. Once again, one cigar is much slower than the other two. All three are slow-burning, but one cigar—the first sample I smoke—takes an hour longer to get through the first two thirds. 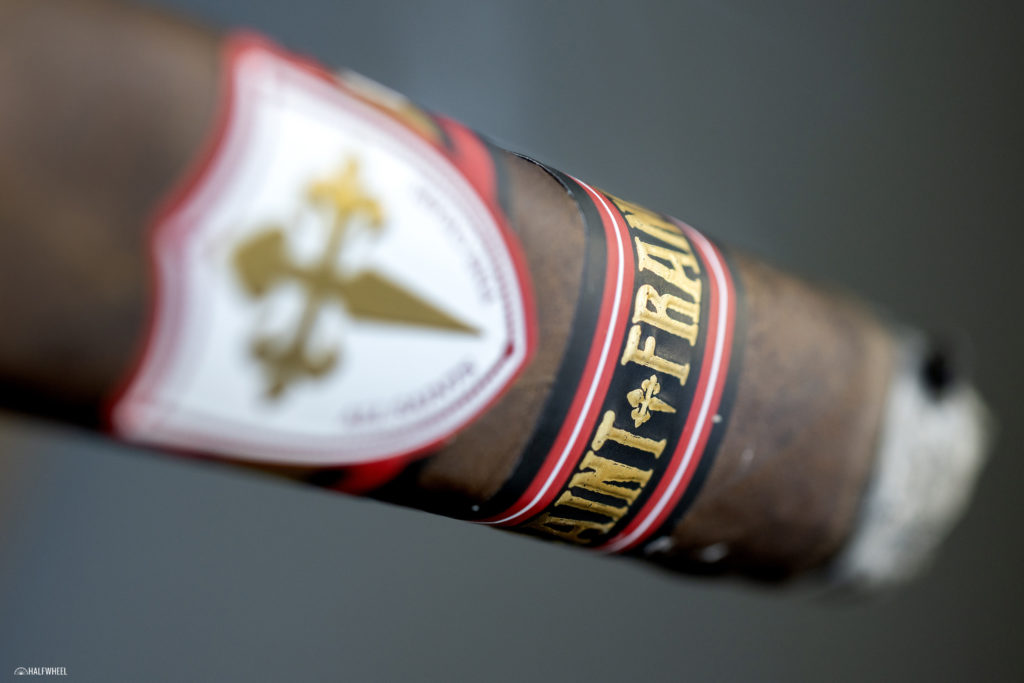 The final third of the All Saints St. Francis Toro is drier than the first two thirds. A sharp earthiness is now the leading flavor, followed pretty closely by leather and some of that brown mustard sensation. The finish has popcorn, mustard, a sugar-like sweetness and tart citrus flavors. Retrohales have mustard, leather and a more vibrant earthiness. They finish with nuttiness, white pepper, earthiness, black pepper and some creaminess. Flavor is full, body is medium-full and strength is medium-full, though it’s getting pretty close to full. Touch-ups are needed on two of the three cigars and the some other construction metrics—draw, burn line—leave a bit to be desired. 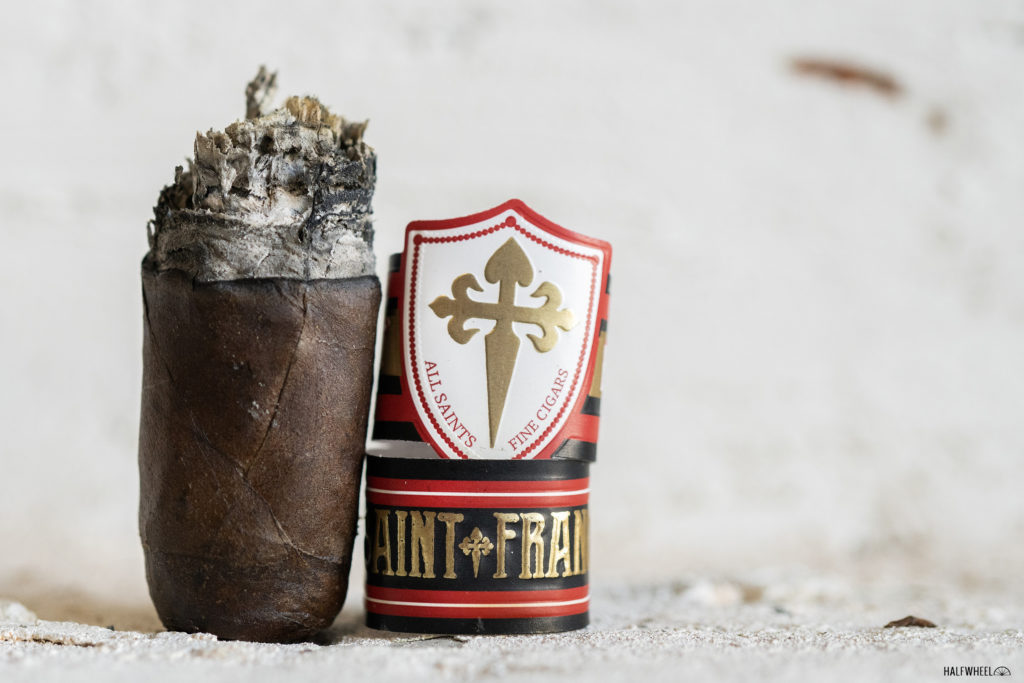 Like Brooks Whittington, I was impressed with the debut All Saints Dedicación line and was curious to see what the company would do with its second line. Then I started smoking the first cigar, and then I kept smoking the first cigar, and then finally that first cigar ended. While the three St. Francis Toros I smoked were far from "bad," they were also noticeably not in the same league as the Dedicacións I've smoked to date. I'm curious to see if the wrapper change helps to remove some of the massive barnyard flavors and bring a bit more balance to this cigar, or perhaps it only happens with lots of time in the humidor.