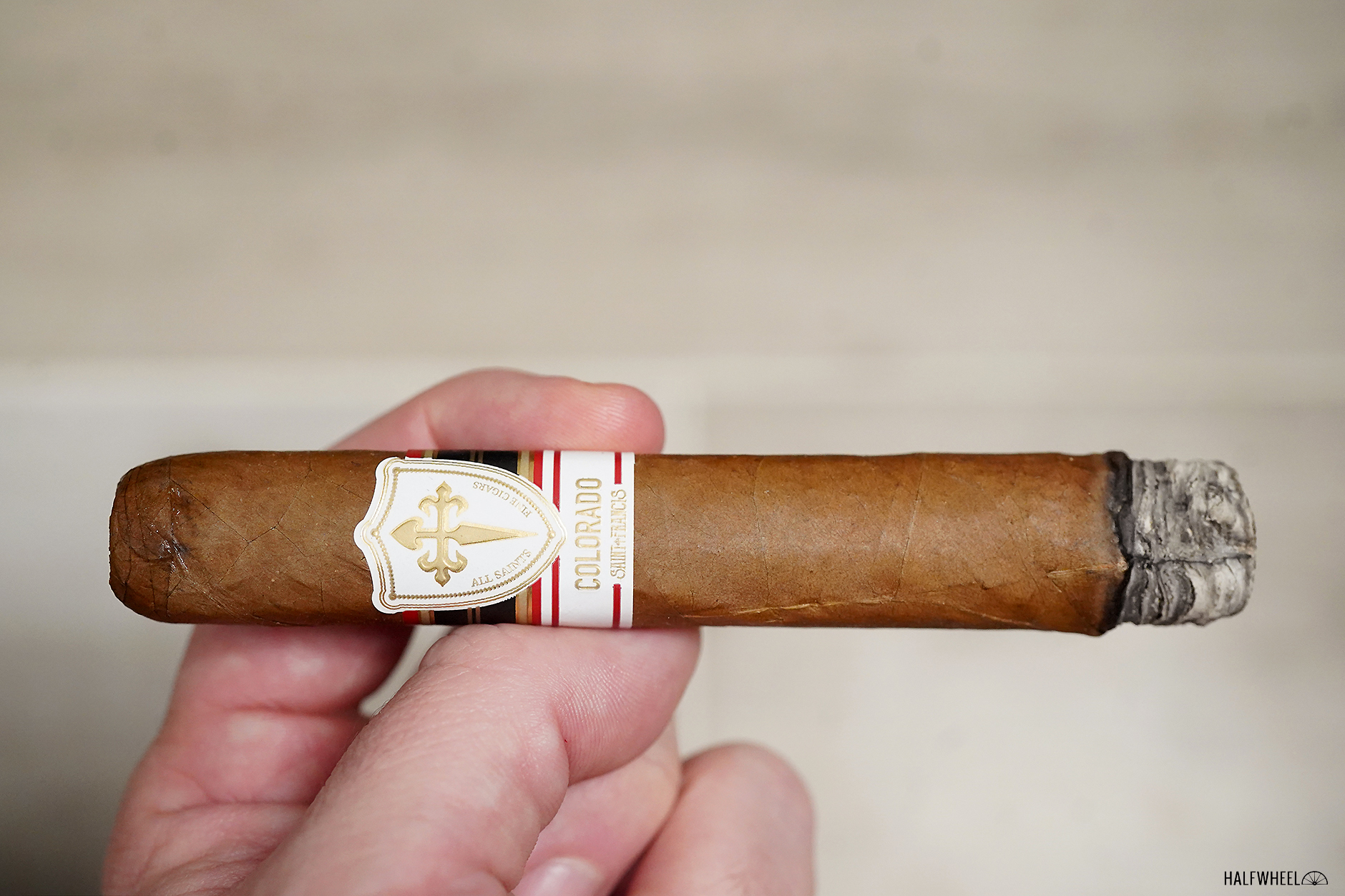 We don’t track the amount of time between when a cigar company launches a line and then announces its offshoot line, but the relatively short amount of time it took All Saints Cigars to follow up its St. Francis line might be near the top of the list.

The company released its St. Francis line at the Tobacco Plus Expo trade show in May 2021, using an Ecuadorian oscuro wrapper over a Nicaraguan binder and fillers from Nicaragua. Then at the 2021 Premium Cigar Association (PCA) Convention & Trade Show in July, the company gave its St. Francis line its first extension by way of a Colorado shade, Ecuadorian habano wrapper. While the binder and filler both used Nicaraguan tobacco like the original St. Francis, the company says that the filler blend was tweaked, though did not disclose specifics. Both versions were released in the same four vitolas, which are produced at Tabacalera Villa Cuba S.A. (TAVICUSA) in Estelí, Nicaragua. The design of the All Saints St. Francis Colorado Robusto’s band is the first thing that catches my attention, as it centers my eye and then directs my attention to the wrapper by way of the vertical cue of the Cross of Saint James that is the topmost element. The cigar itself is impressive looking, with a nutty brown color that is on the matte side of the spectrum. While the cigar is smooth to the fingers, there doesn’t appear to be much oiliness in the wrapper, and the veins are so small they barely even register. The first sample’s firmness is more inconsistent than I generally come across; there’s the pillowy aspect that most pressed cigars have but this sample has a soft spot on its backside, while the area above the band is much firmer than the rest of the cigar. The other two cigars are much more consistent, leading me to think that first sample was an aberration. The pre-light aroma is fairly light and easy on the nostrils, reminding me of either packaged pizza dough that just came out of the refrigerator or the inner, doughy part of a soft pretzel. It’s pretty singular and by no means peppery, just barely warranting being called sweet in one sample. The cold draw leans toward the firm side of the spectrum, while the first impression is of a more developed bread note, not too far off from a slice of what I’d call a typical grocery store wheat bread flavor. From there, the flavor picks up a bit of nuttiness and dry, occasionally dusty earth.

The All Saints St. Francis Colorado Robusto starts out pretty easy on the palate; there’s no bang of pepper or flavor, but rather a profile that’s just shy of medium with a light earthiness, a bit of black pepper, and more of the bread texture that I picked up on the cold draw. While smoking the first cigar, I take my first retrohale around the half-inch mark and am greeted with a ton of nose tingle, driven largely by white pepper but the sensation suggests a pinch of bright red chili pepper is in the mix as well. Some earlier retrohales in the other two samples don’t deliver much sensation, leading me to think the profile may be easing me into the experience. As if on cue, the second sample picks up its pepper offering when the burn line is close to the half-inch mark as well, both on the palate and through the nose. Beyond that pepper, the flavor is largely a dry and earthy sensation, accented by some toast and mixed nuts. Other than causing some drying of the mouth and being a somewhat linear flavor, it’s an enjoyable first third. While the draw was a bit firm before I lit the cigar, it’s now quite smooth and easy, producing decent amount of smoke with each puff. The smoothness is a bit of a contrast to the building black pepper that tingles my tongue and gives the smoke some character. After starting just a bit over the mlld mark, flavor is medium-plus, body is medium-plus, and strength is almost at the medium mark.

The All Saints St. Francis Colorado Robusto is burning a bit faster than what I would consider average, something that at first thought leads me to suppose that there isn’t a lot of heavy tobacco being used in the filler. Flavor-wise, the pepper continues to drive the profile, while the dry earthiness pulls even at times but never quite overtakes it. As the burn line moves through the midway point, the flavor picks up a bit more sharpness, further reminding me of the red chili pepper flavor by how it hits my palate, though only one cigar gives me the related heat. It’s a sensation and flavor that is not too far away from what you might sprinkle on your pizza, and if you’re like me, would also taste on its own. I also get a flavor and aroma that has me thinking of grilled peaches, with the fruit’s distinctive flavor the first thing I’ve been able to pick up in the general category of sweetness. It’s a unique flavor and one that is not only fairly rare to come across but one that is also really enjoyable. Unfortunately, it’s also quite brief. I get a bit more of the nutty and earth components as the burn line approaches the final third, which takes the flavor profile closer to medium-full. The body is still medium-plus but strength feels like its moving up into medium-plus territory. Construction and combustion is good if a bit short of perfect when it comes to the burn line and combustion. 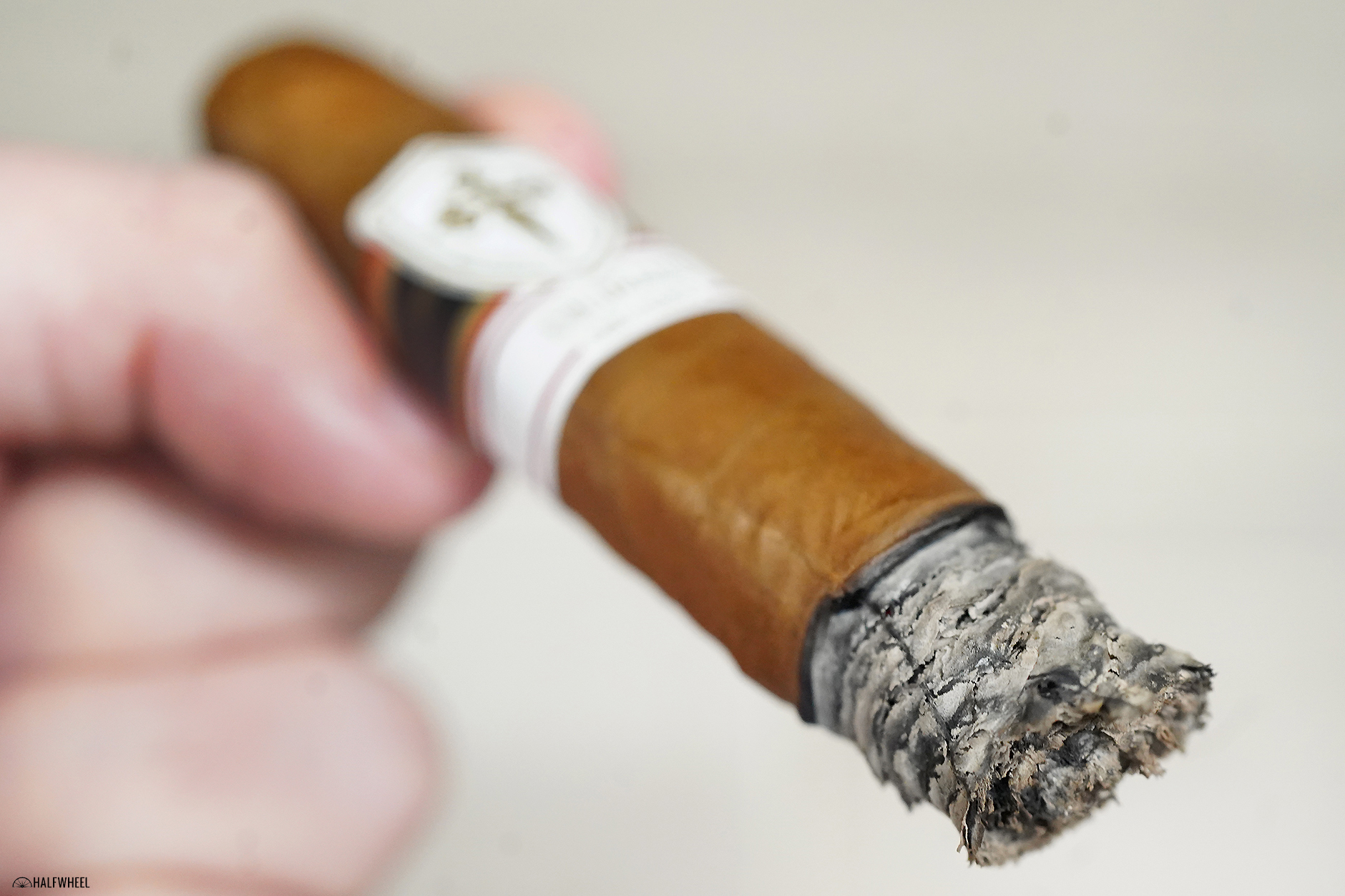 The final third of the All Saints St. Francis Colorado Robusto starts by adding a bit more earth to the profile, now a heartier version that has a bit of smokiness to it, but also a bit rougher and with a more robust texture to it. While the pepper seemingly hasn’t increased much in quantity, the ambient smoke now delivers a bit more sting to my eyes and, at times, a bit more of a physical reaction towards the back of my throat as well. The flavor profile is still very approachable and enjoyable, though I find myself stopping short of calling it complex or dynamic. The retrohale is a bit closer to being dynamic, as a complex white pepper really lights up my nostrils, while just a touch of chalk appears on the finish. When combining the flavor, retrohale and newfound effect on my eyes, the All Saints St. Francis Colorado Robusto hits its highest level of impact right around where the band would be, and I write that sentence before the red pepper heat gets to work on my palate via the finish. The flavor continues to evolve, getting a bit smokier and, at times, reminding me of the ambient aroma of a barbecue joint, though a bit lacking in the meat department. But that still leaves a rich woodiness that is a fairly recent development, the remnants of a campfire, and then a third component that I can’t quite place my finger on, almost the richness that comes from the fatty part of meat. Amidst these other changes, the strength of the cigar has also been building, and there is a point where the nicotine really begins to be felt in my system. It’s not strong enough to have me feeling woozy or wanting to lie down, but it is enough to have me thinking about grabbing some white sugar as soon as I’m done with the cigar to try and mitigate the strength. It’s also enough to have me thinking that have a second cigar—this one or any other—probably wouldn’t be a great idea. Flavor finishes medium-full, body is medium-full, and strength is somewhere between medium and medium-full depending on the sample. Construction is still good overall, though combustion struggles at times. 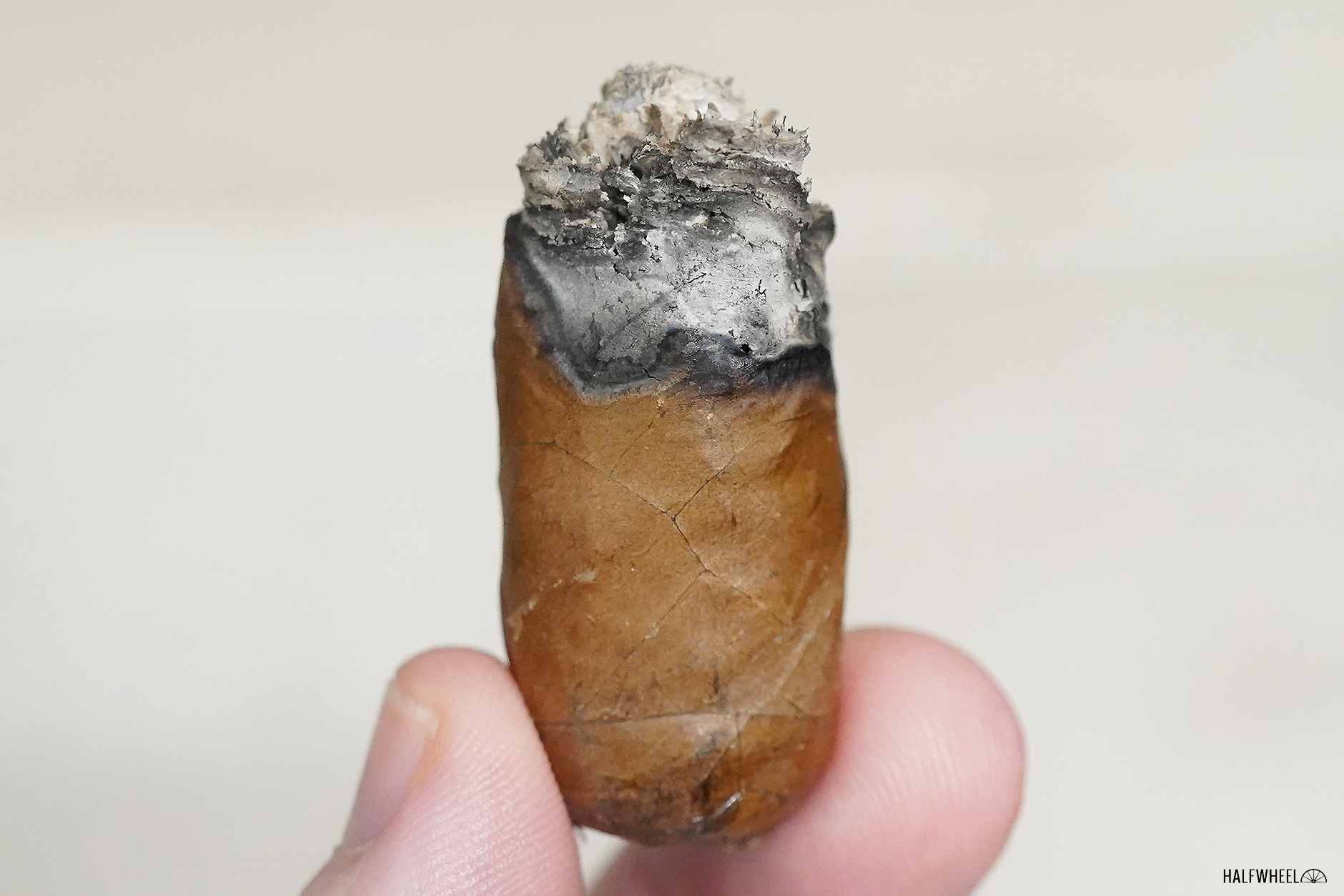 While the All Saints St. Francis Colorado Robusto might not be the most complex or dynamic cigar I'll likely smoke this month, it will almost certainly be one of the most agreeable and easily enjoyable. The cigar starts out on a mellow and familiar note, adds some pepper, then really wakes up and doesn't stray too far from the path it establishes in the first third. But it does hit a pretty high mark in its final third when the flavor and body fill out, the profile adds that unique grilled peach note and smokehouse note, setting up an easy finish for the final inch or so. Construction and combustion could have been better in spots, but neither were more than an occasional inconvenience, mainly with two cigars needing some relights in their second halves. Consider me impressed by this latest offering from All Saints, and one that I would certainly smoke again and recommend giving a shot.