For the fourth installment of its Black Market Filthy Hooligan cigar released as a lead-up to St. Patrick’s Day, Alec Bradley has decided to switch things up and create a barber pole using a Honduran candela and a leaf from Nicaragua’s Jalapa region.

“This year, I wanted to create a totally different version of the Filthy Hooligan,” said Alan Rubin, president of Alec Bradley, in a press release. “The 2016 blend will have a much wider appeal, and those who loved the two previous versions will not be disappointed; this is no ordinary candela.” 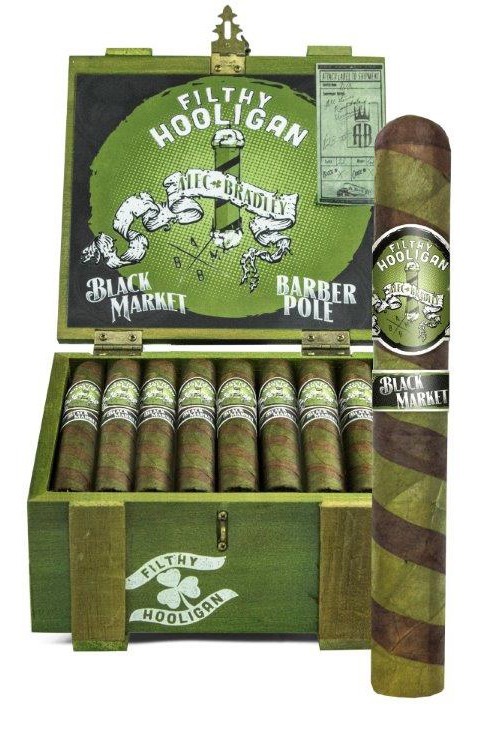 The cigar measures 6 x 50 and will have an MSRP of $8.50 when it arrives on retailers’ shelves in the near future. Just 2,000 boxes are being produced, each holding 22 cigars.

Borrowing from the Black Market blend, the Filthy Hooligan uses a slightly modified version that features an Ecuadorian Sumatra binder on top of Honduran and Panamanian fillers. The resulting flavor is described by the company as being a medium-bodied, full-flavored smoke that explodes on the palate with sweet tobacco flavors countered by the brawnier core leaves, like a good Irish stout. Production is again handled by Tabacos de Oriente in Danlí, Honduras.

“The unique flavor of a candela wrapper is something that every cigar smoker should experience at least once,” Rubin noted. ”Add the dark Jalapa wrapper, and it’s not only more flavorful, but the barber pole form can also be very appealing, visually. When it comes to just a green cigar, we’ve been there, done that.”

Update (Feb. 15, 2016) — a company spokesperson told halfwheel that the March 17 release date referenced in the original press release and this story was simply a suggestion, not an actual release date. Retailers were expected to begin selling the cigars upon receipt, with shipping beginning on Feb. 10.