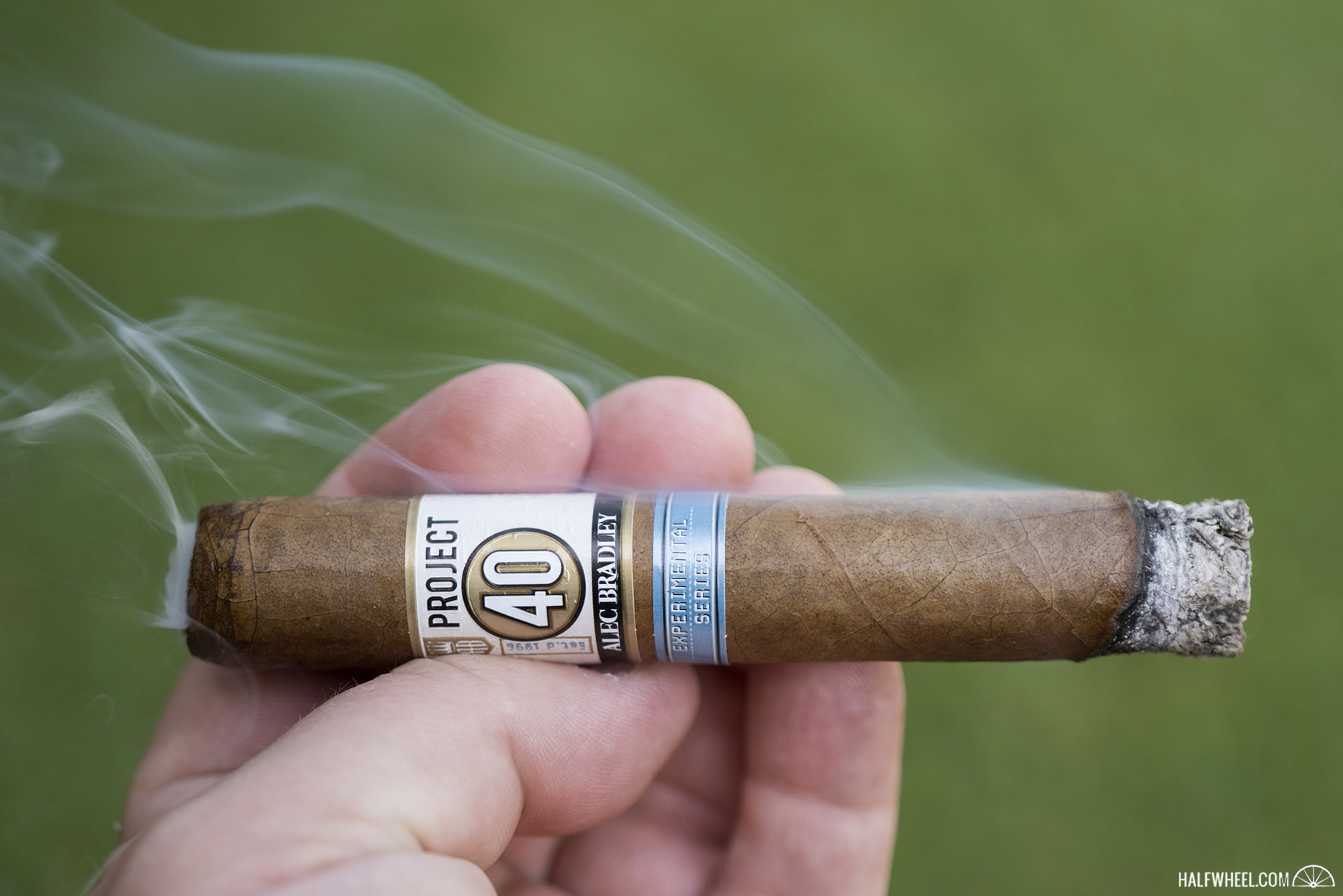 One of newest release from Alec Bradley strives to gain “a deeper understanding as to why cigars have a positive cognitive impact on the mind and body.” Yes, it’s a cigar.

Alec Bradley’s Project 40 is named after an interesting assertion that breaks down a person’s happiness: 50 percent comes from genetics, 10 percent is based on circumstance and the remaining 40 percent is supposedly controlled by how that person thinks. It’s part of the company’s new Experimental Series.

“Project 40 is a generally accepted concept in multiple industries with the end goal to find how a service or product can have a positive impact on the mind and body,” said Alan Rubin, founder of Alec Bradley, in a press release. “Since cigars bring people together, cause for relaxation and create positive experiences, I asked myself why this concept should not be applied to premium cigars. This was my inspiration for Alec Bradley Project 40.”

The four vitola line is being produced at Jesus Fuego’s factory in Estelí, Nicaragua and includes a blend made up of a Nicaraguan wrapper covering a Brazilian habano binder and filler tobaccos from Nicaragua. Packaged in boxes of 20, none of the four sizes carry a retail price under $6. 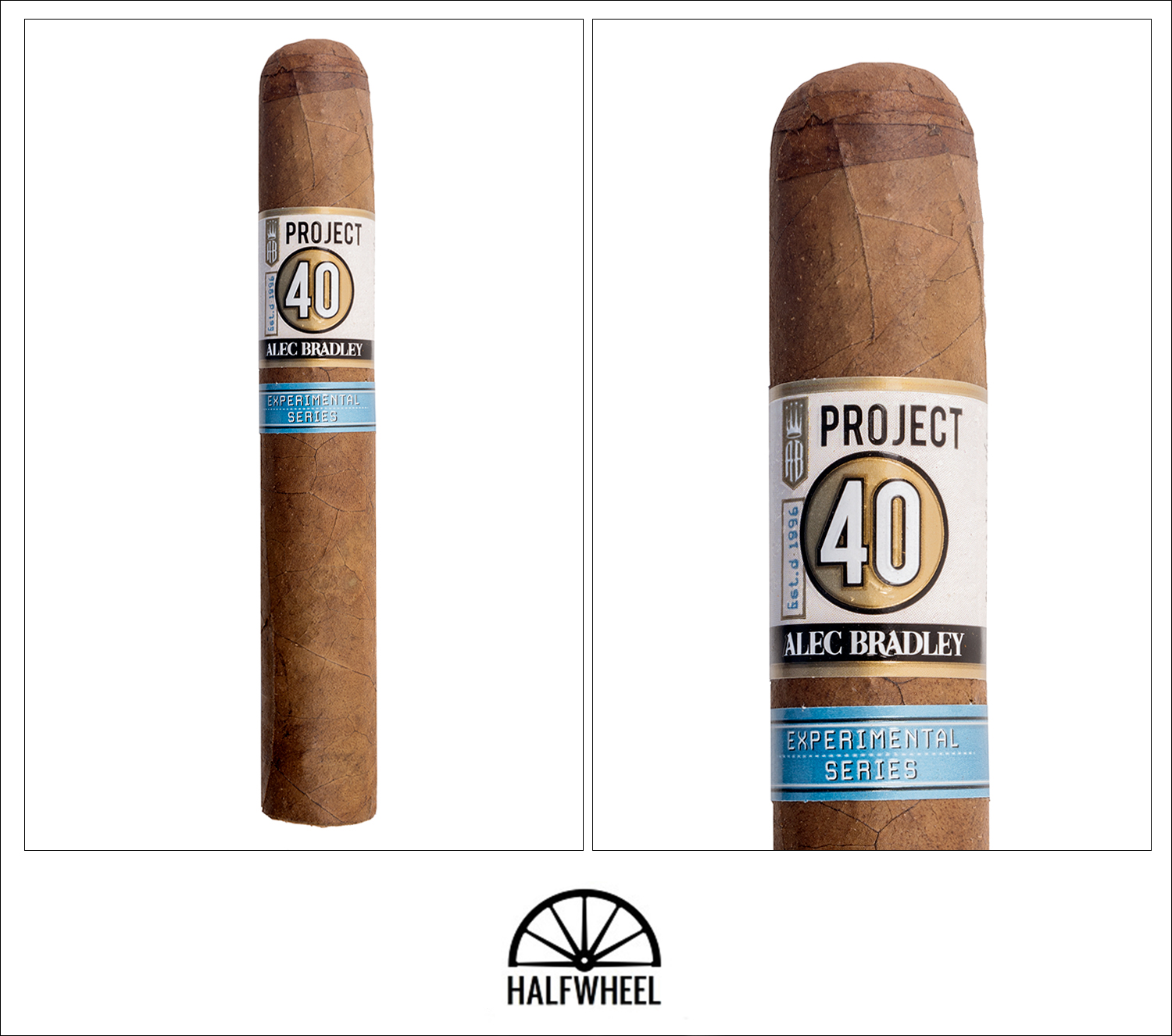 Visually, the Alec Bradley Project 40 05.50 features a pale cinnamon brown wrapper which feels quite a bit like parchment, but there is very little oil present. The cigar is extremely spongy when squeezed and there is a massive soft spot halfway between the secondary band and foot. Aroma from the wrapper and foot is a combination of strong sweet cedar, peanut butter, manure, grass, milk chocolate, coffee beans and rich raisins, while the cold draw brings flavors of creamy almonds, leather, hay, aromatic cedar, sawdust, slight white pepper and the same rich raisins.

Staring out, the Alec Bradley Project 40 features an obvious creamy almond note as the dominant flavor, followed by lesser notes of toast, cedar, leather, hay, gritty earth and powdery dark cocoa. While there is some white pepper on the finish and spice on my tongue, the big news is a massive and rich raisin sweetness on the retrohale that only seems to get stronger as the first third burns down. Construction-wise, the Alec Bradley Project 40 05.50 features an excellent draw and as well as a wonderful burn, while the smoke production is quite copious off of the foot. The overall strength starts out fairly mild, and while it does increase a bit, it is still well short of the medium mark by the time the first third comes to an end.

Although the spice from the first third has completely disappeared by the start of the second third of the Alec Bradley, the rich raisin sweetness has actually increased slightly, making it even more of a major player in the profile. The dominant flavor continues to be the same creamy almond note, followed by a combination of leather, earth, bread, hay, toast, dark chocolate and baker’s spices. Both the burn and the draw continue to impress, while the smoke production is still very thick flowing from the foot. Strength-wise, the Alec Bradley increases enough to come quite a bit closer to the medium mark right at the end of the second third. The now familiar creamy almond flavor remains the dominant flavor in the final third of the Alec Bradley robusto, combined with the raisin sweetness that is still a massive part of the retrohale, along with some slight white pepper. In addition, more flavors of strong and bitter espresso, cedar, cinnamon, hay, peanut butter and dark chocolate. While the draw is great, one difference is the construction—specially the burn—which I have to touch up twice in quick secession. Finally, the strength does increase noticeably as well, easily reaching a point just past the medium mark before I put down the nub with a bit more than an inch left. Do you like raisins? I mean, really like raisins? Then the Alec Bradley Project 40 is for you, as the profile is inundated with the flavor from the initial cold draw to the last puff. Thankfully, that is not the only note to speak of, as there is also plenty almonds, cedar and even some white pepper and spice to keep things more interesting. Construction was quite good overall, and while the strength does take a noticeable uptick in the final third, it never comes close to being strong enough to affect the balance the blend has. Those wanting a full strength powerhouse need not apply, but if you are looking for a new, lighter flavor bomb of a blend to try out at a surprisingly competitive price point, you have found it.