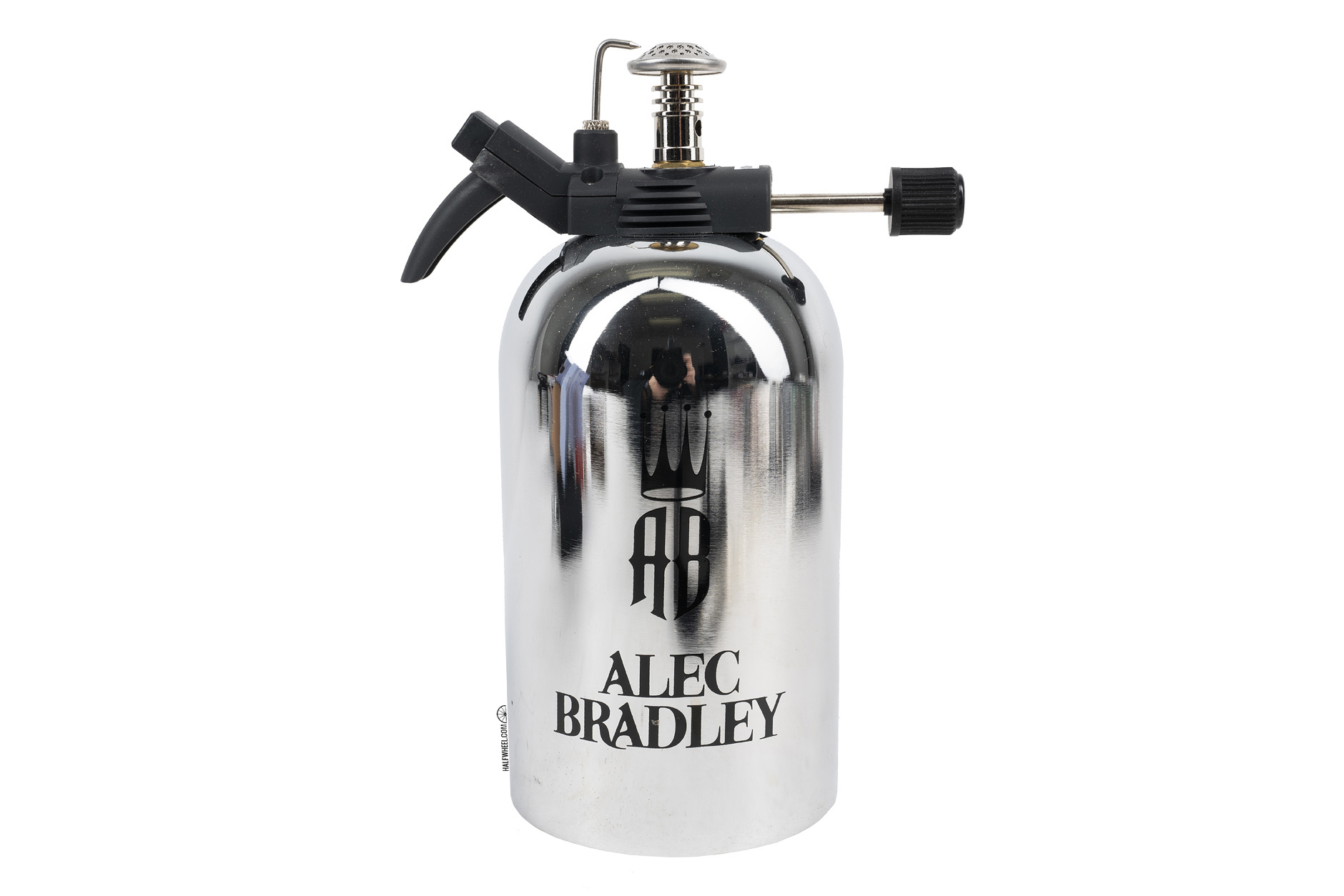 In one of my previous reviews of a lighter, I wrote a line that said something to the effect that the most common decision someone has to make when buying a lighter is whether to go with a torch or soft flame.

Turns out I had omitted a third option: the Alec Bradley Burner and its new bigger sibling, the Mega Burner.

Originally released in 2008, the Burner brought a unique approach to lighting cigars and a unique design to the lighter itself. A short, squat tabletop lighter—not much different than a miniature camping stove—it was recognizable for its metal fuel tank and seemingly intricate mechanism used to produce a flame—turn the extended knob to open up the flow of butane, engage the push button ignition, and then close up the butane flow by turning the knob back to the right, lest your supply of butane drift out into the atmosphere.

This year, the Burner got a new iteration, the Alec Bradley Mega Burner ($79.95) which keeps the mechanics of the original Burner, but adds a massive fuel tank to give you enough fuel to last seemingly months, it not longer. 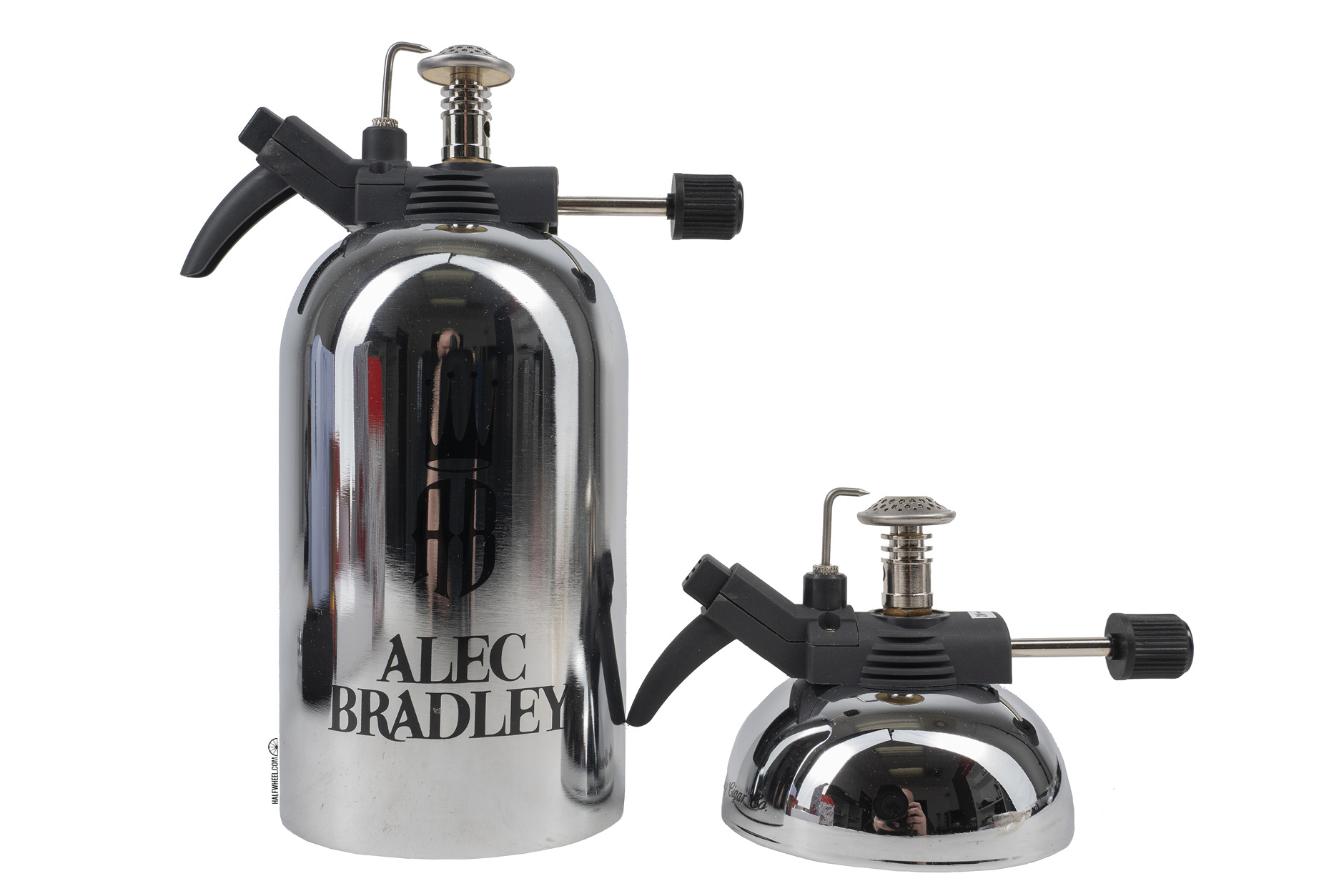 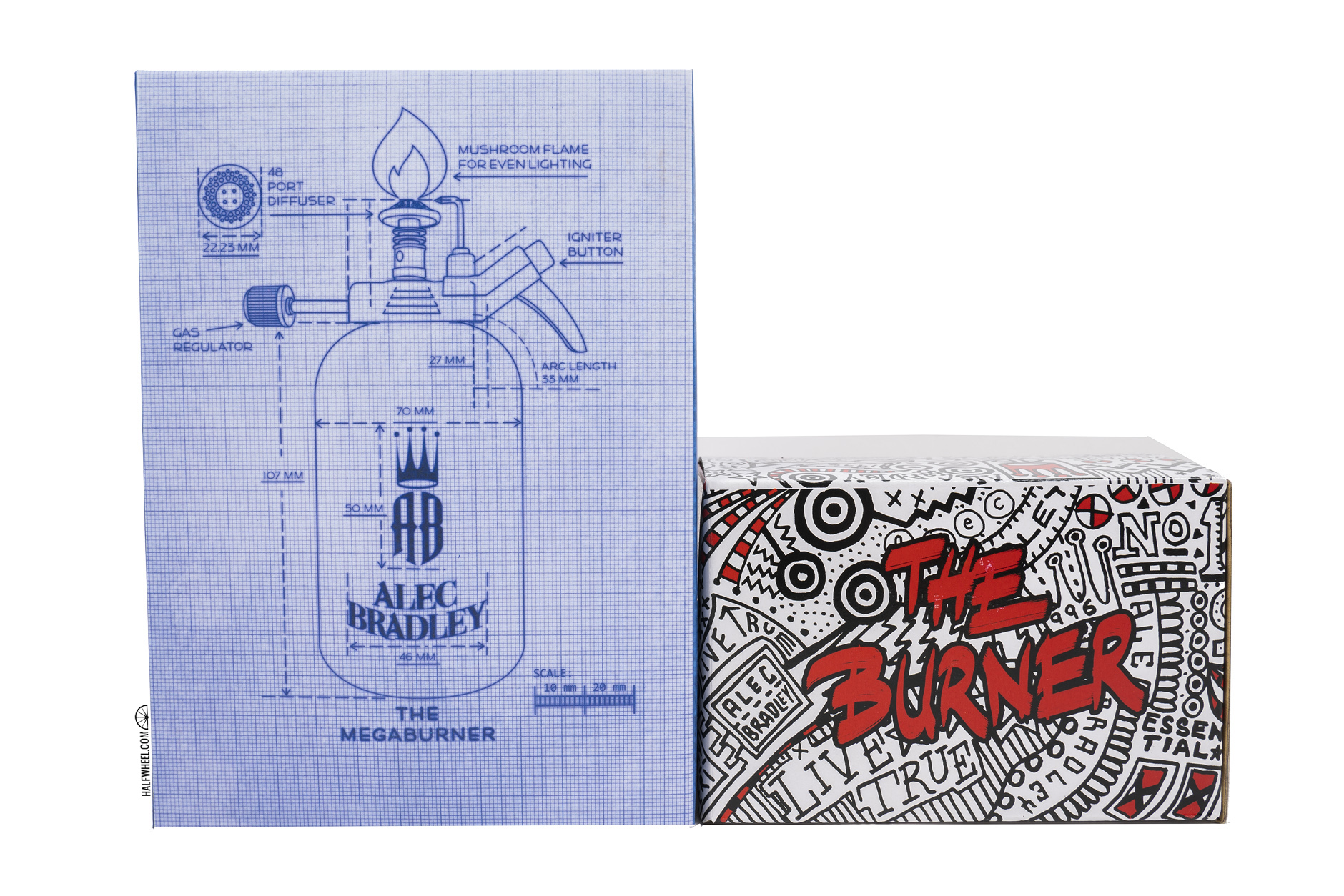 The company claims that with a full fuel tank, the Mega Burner can provide eight hours of burn time, which depending on how long it takes you to light your average cigar, could mean it could be hundreds or thousands of lit cigars between refills. It’s a daunting number to even consider, but from a company that has never shied away from embracing excess—the Texas Lancero, the 64-ounce Pocket Flask and its seemingly outright blessing of significant consumption of alcohol by way of hangover cures in its trade show booth—such a creation seems both fitting and almost inevitable. Quite simply, an update to the original Mega Burner, this time with a huge fuel tank. The original Alec Bradley Burner is one of the more unique designs on the market in that it has a fairly wide, circular flame at its base to create a cone of flame with which to toast and light your cigar—almost like that of a Bunsen burner for those who remember chemistry class. Additionally, the lighter features a protruding nob that is used to open up the fuel valve and get butane flowing prior to ignition, Once lit, the knob is used to fine tune the size of the flame before being turned all the way back to the right to close up the fuel supply.

Whether it be the Mega Burner or its predecessor, there are few lighters of this style available on the market, both in terms of the largely manual operation and the distinctive “mushroom” flame style that is offered, as the company calls it. As for the Mega Burner, its fuel capacity is its signature feature, and depending on how often you use the lighter, you could seemingly go a year between refills. To say that the direct competition for the Alec Bradley Mega Burner is sparse would be an understatement. While there are plenty of other lighters on which to spend about $80, there’s not a lot that offer the combination of a huge fuel tank and mushroom-style flame.

Seeing something like the Alec Bradley Mega Burner makes me wonder about the feasibility and viability of a lighter you could attach to the top of a can of fuel, similar to Bernzomatic torches that are used for welding and other heavier duty projects. It would seem to be possible given that it’s already being done for other purposes, so then the questions becomes is there a market for such a design?

Not long after I received the Mega Burner, it stopped working. More specifically, something prevented the lighter from igniting, though I’m not really sure what. There was plenty of butane, but either a line was clogged or something with the ignition just wasn’t doing its job, meaning the lighter had become a paperweight. So I sent an email to Alec Bradley’s customer service department, and they said they’d send me a brand new one once I returned the defective one as part of the two-year warranty coverage.

So in a box it went, and not long after—less than two weeks—I had a brand new Mega Burner that has functioned perfectly for the remainder of my time with it. The communication was great and they got the item swapped out without issue. Yes. If this is something that you think you’d enjoy having, I really couldn’t find a reason not to recommend it. It’s a lighter that has its limitations in terms of portability and flame style, but if that’s not a concern, then the Alec Bradley Mega Burner gets the green light from me. It’s a bit more involved but it works more than capably to light a cigar, and ultimately that is what it is designed to do.

The lighter used for this review was purchased by halfwheel