It’s been a few years since I first reviewed the original Fine & Rare.

The flagship cigar for Alec Bradley was noted for having seven different filler tobaccos, an interesting and informative band, and at least in my case, burning incredibly slow.

Fine & Rare has become an annual thing, changing shapes and names each year. The 2015 version was known as JRS10=(86) and was offered in a 6 1/2 x 56 vitola. It once again features seven filler tobaccos, two binders and one wrapper for a total of 10 different types of tobacco. A total of 2,000 boxes of 10 were released with 1,500 heading to the U.S.

As in the past, the large bands feature a variety of information:

This is now the fifth year for Fine & Rare, although the company has made a few charity-only sizes over the years that are not listed below. 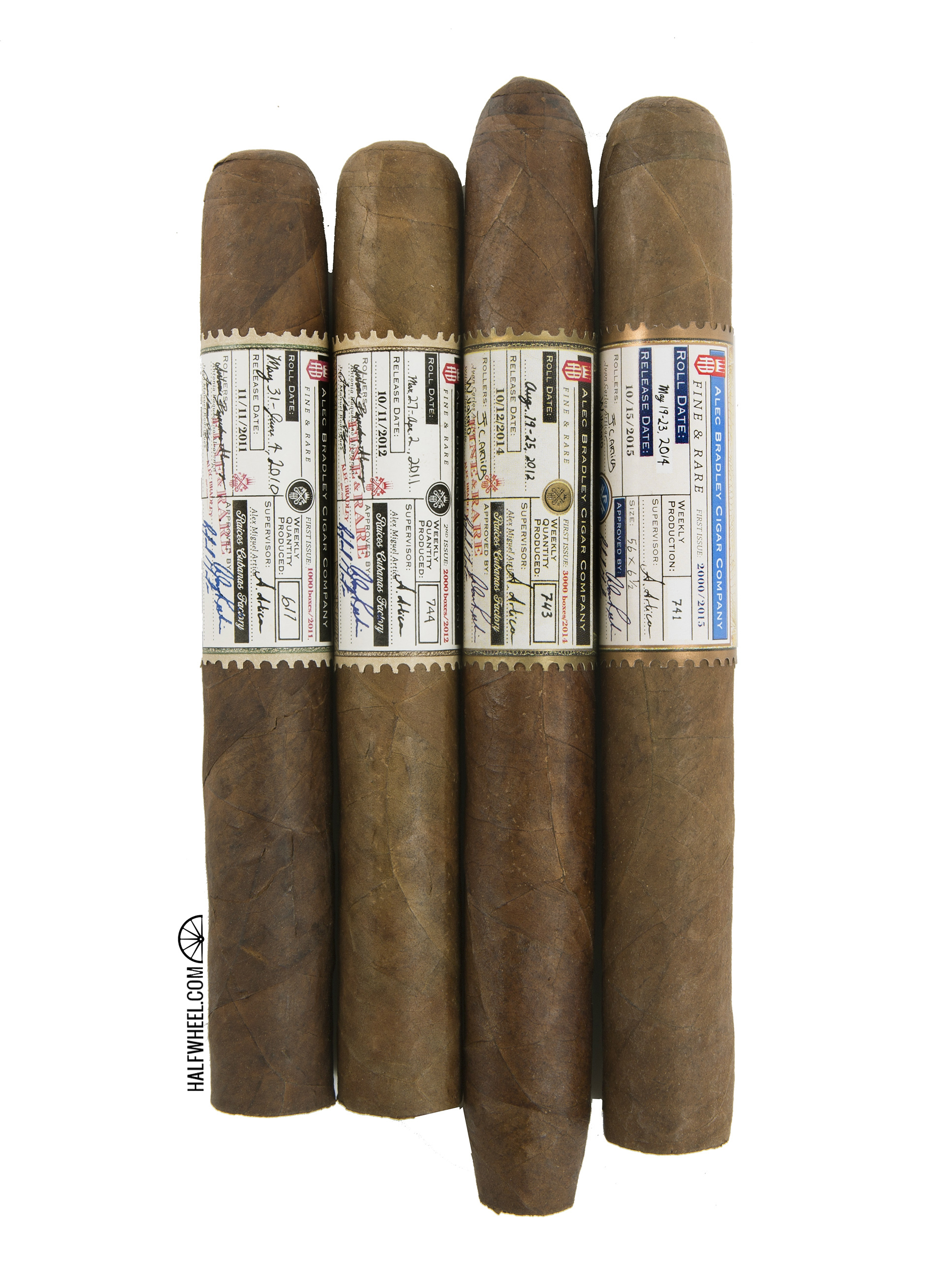 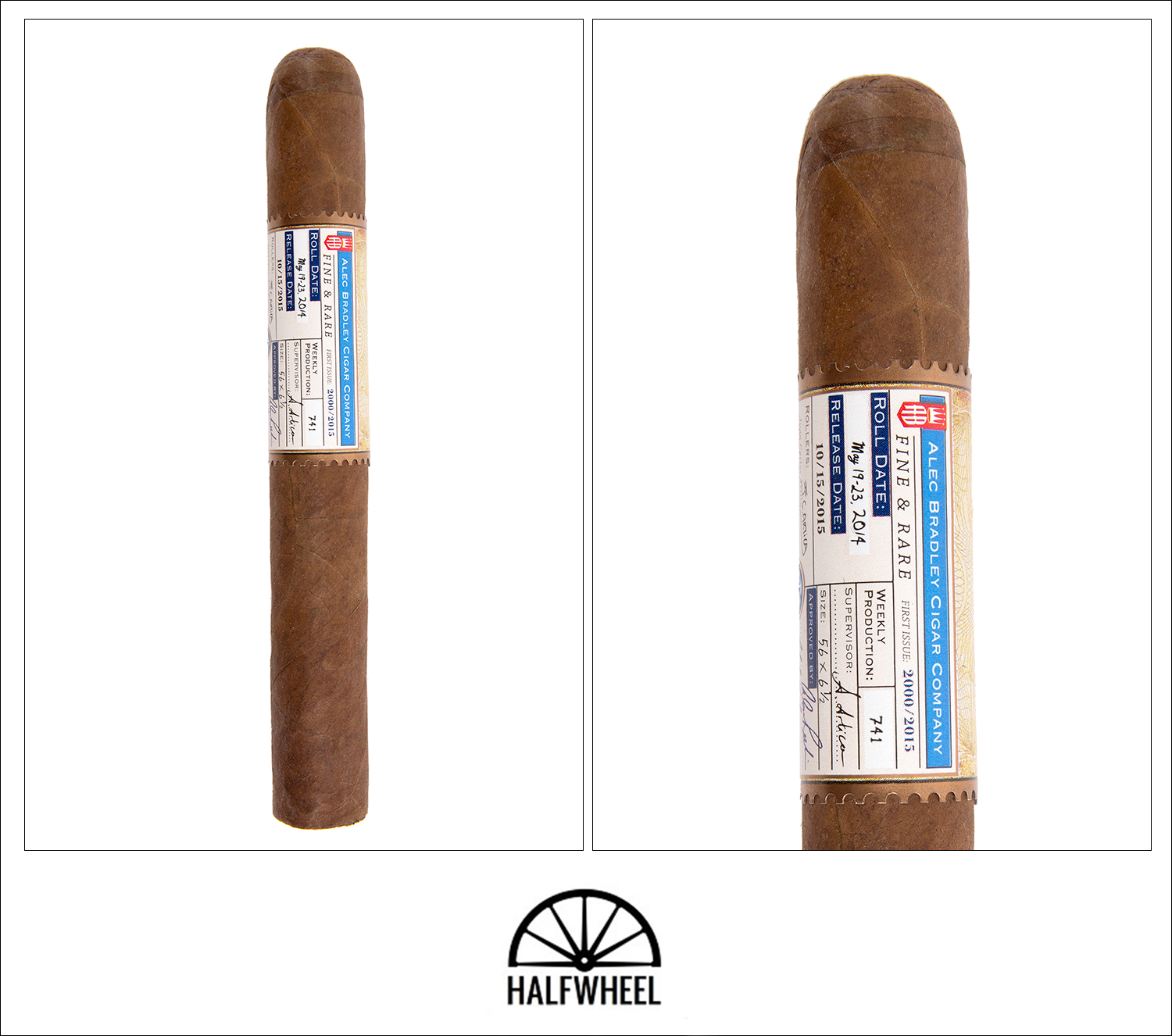 While I most certainly am not an expert on the Fine & Rare, the band is slightly different with a lot more blue and a larger version of the key. The wrappers are not as dark as last year’s release, but feature a nice dark mustard brown color. I get some vanilla, damp leather and sweet brownies from the wrapper. The foot reminds me of one of the Java aging rooms at Drew Estate. It’s got a mixture of ammonia, wet tobacco and an artificial chocolate sweetness. Interestingly, none of that is on the cold draw. Instead, the Alec Bradley has a complex mixture of sweet oranges, blueberry, leather, dark cocoa, grass and some floral. It’s got a ton of finesse, particularly in how the cigars are layered.

That being said, all three Fine & Rares that I smoked started off somewhat pedestrian. There’s some dry citrus, leather and cedar, not exactly particularly promising given the cold draw. The good news is that complexity returns. Within the first half of an inch the flavor has gotten sweeter thanks to what tastes like a dash of simple syrup on my tongue surrounded by oak, graham cracker, raisins and grapefruit. The finish is significantly richer with some popcorn, coffee and toasty flavors. Smoke production is really good, albeit, not as insane as the original. What is rather reminiscent is just how slow the cigar is smoking. I’d say the strength is medium, but the flavor and body are both extremely full. 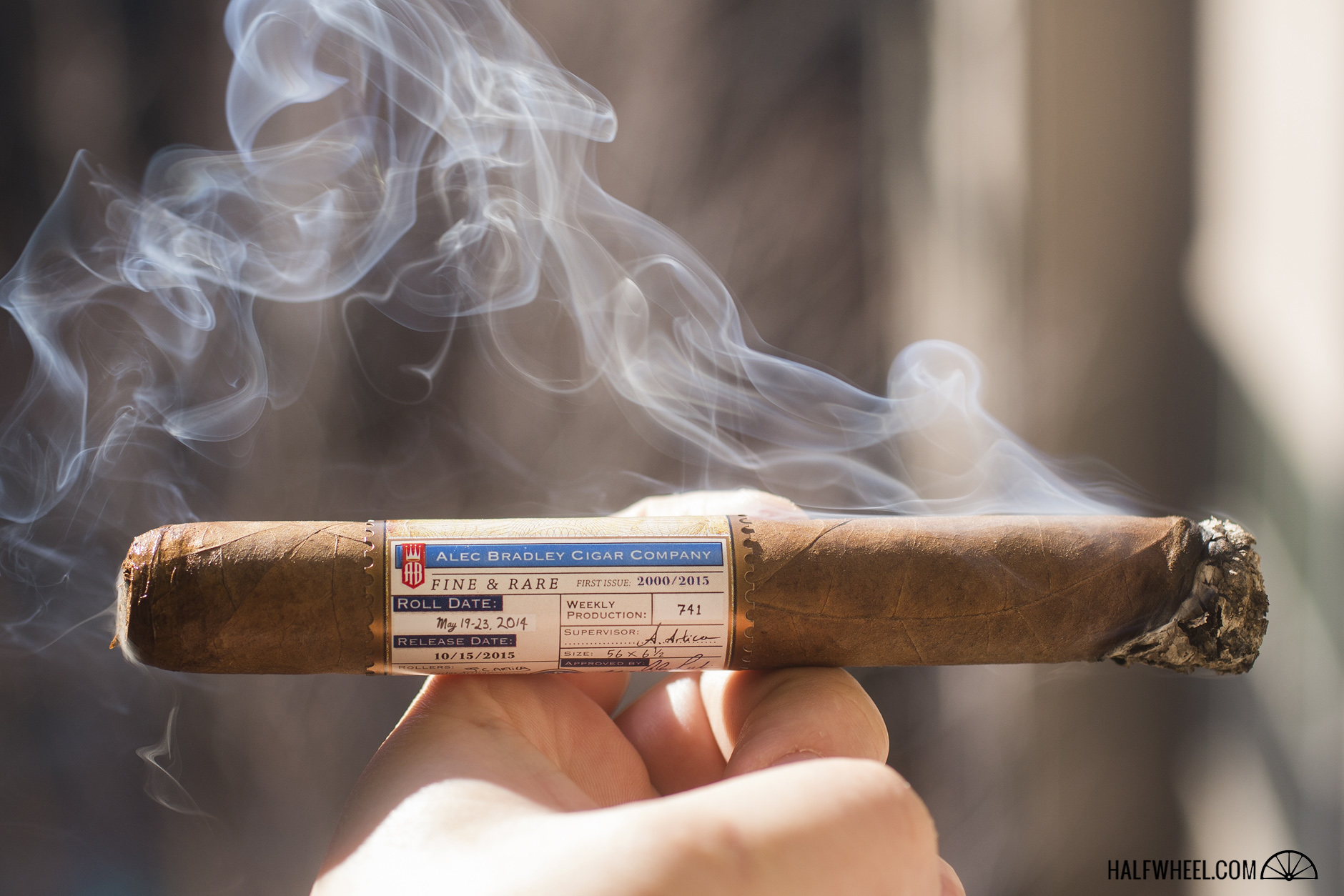 As was the case in the first third, the draw is slowly tightening as the JRS10=(86) burns down. It doesn’t get to bee too problematic, but it is worth nothing. There is a noticeable change in flavor as a charred flavor joins the grapefruit and burnt popcorn that stick around from the earlier third. The lengthy finish continues to be the start of the show for the Alec Bradley. It remains rich with creaminess, citrus, some harshness, a lot of earth and an array of peppers towards the end. The aroma turns a bit pungent, but it’s fine so long as I hold the cigar right under my face in between puffs. The flavor remains extremely full, though the body dips off to medium-full while the strength builds to medium-plus. Towards the end of the final third, the draw is getting a bit too tight, although the smoke production remains quite good. 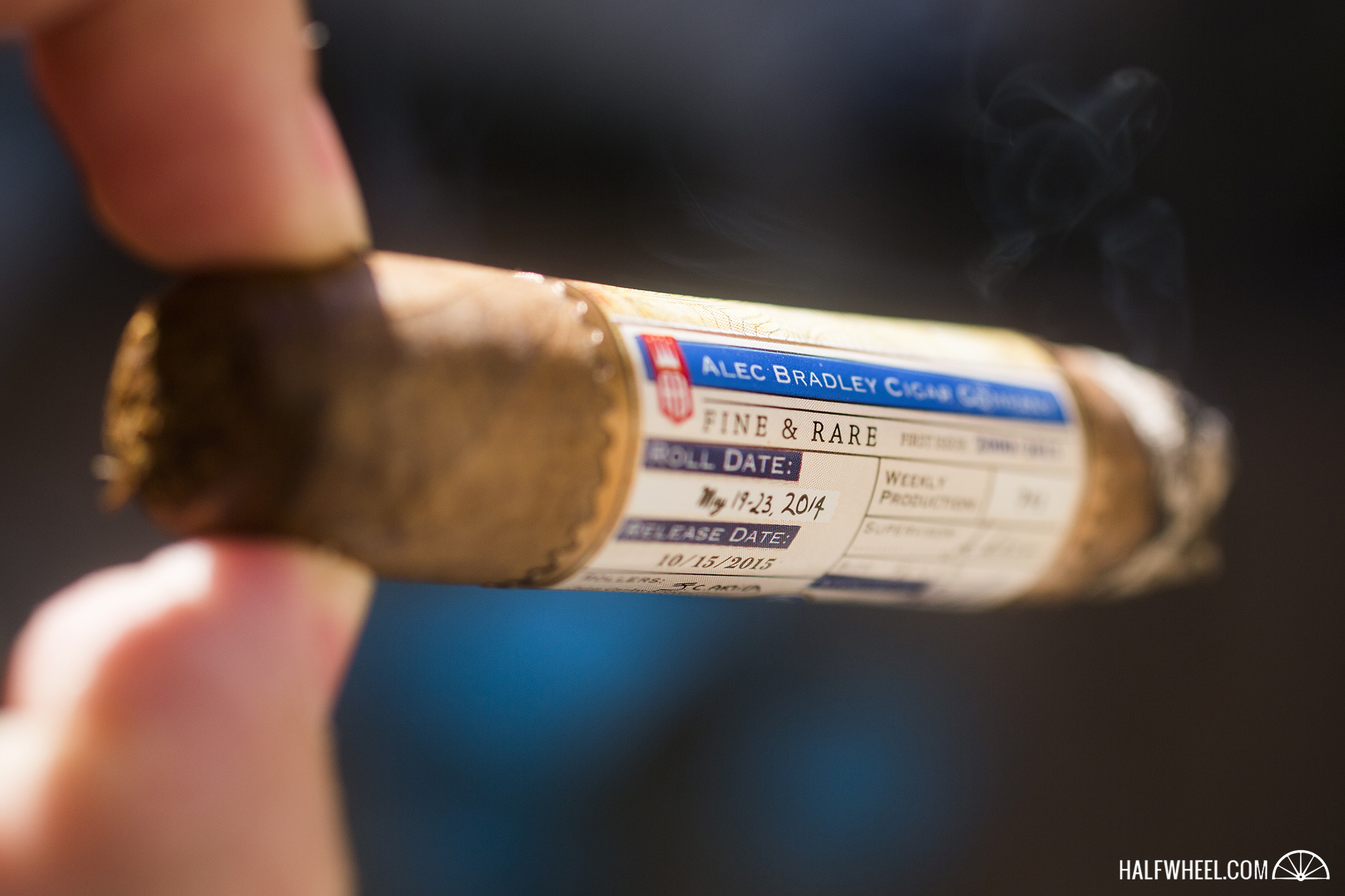 After well over two hours smoking, my palate is a bit rocked given both the length of time and the fullness in flavor. Fortunately, the flavors are still quite good. There’s some creaminess and grapefruit joined by salty crackers, lima beans and an interesting earthiness below. There’s a harshness that hits the palate as soon as the smoke leaves my mouth. It doesn’t overwhelm the flavors, but it sticks around for a full two minutes before turning into a grassy flavor. It’s an incredible testament to just how rich the Fine & Rare is, even if it’s overwhelming. Fortunately, the draw doesn’t get any tighter, but it still ends each cigar noticeably tighter than where it started. As for the strength, it builds to the lower end of medium-full capping off a gradual progression from start to finish. The flavor is still full, it’s just not as extremely full as it was in the second third. 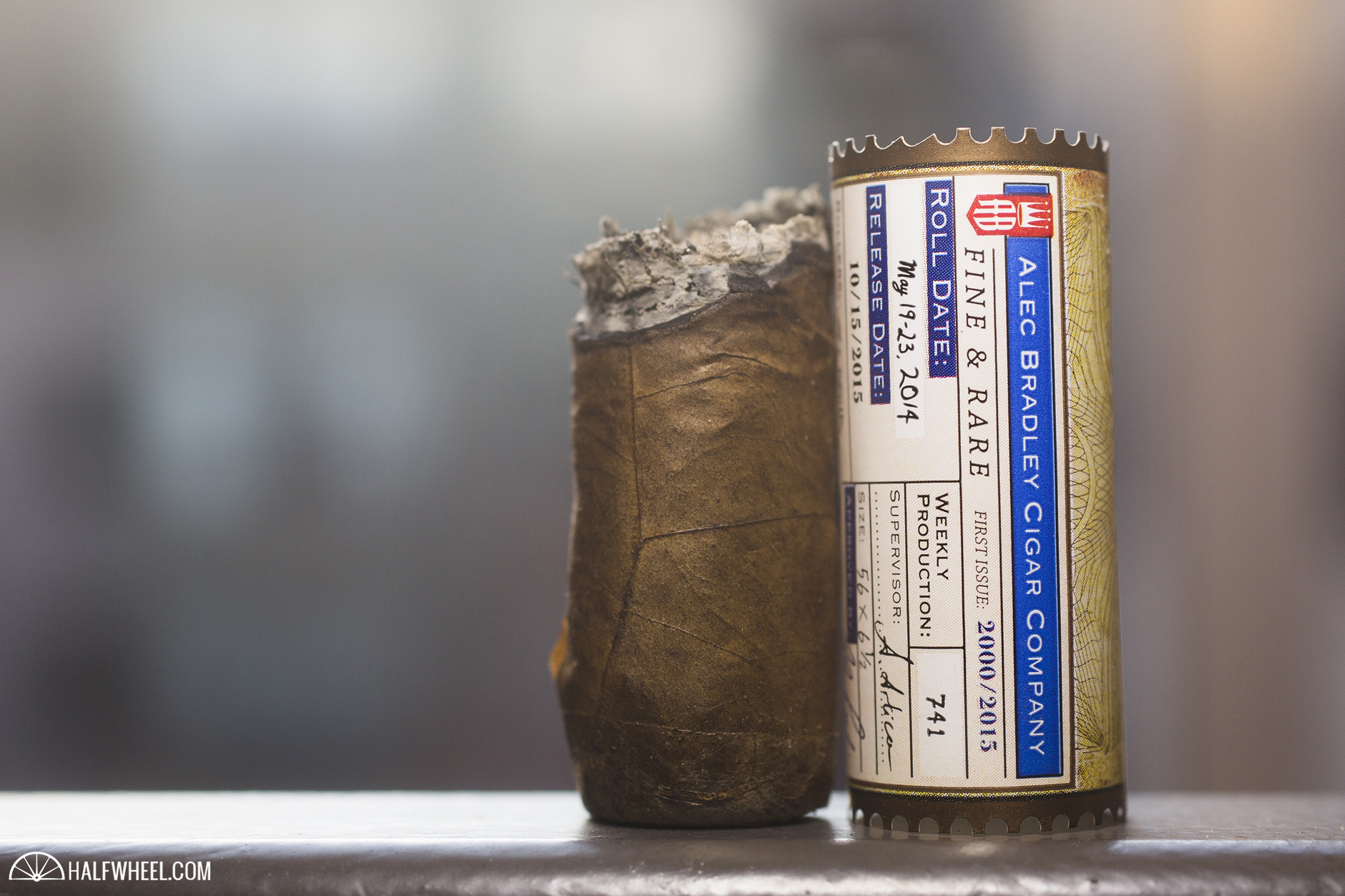 The Alec Bradley Fine & Rare JRS10=(86) is a good cigar, but not one that I would want to smoke save for a few days out of the year. The intensity of the flavors and the length of the cigar create for a punishment on the palate that meant that I had to space the samples out over the course of a few weeks because I needed to plan specific off days after each cigar due to just how exhausting it was on the palate. For me, this is an ideal cigar for a long night of pairings with big beers, wines or spirits because the flavor will likely stand up to just about anything, including overproof whiskies. If you want to grab a big steak, some big scotches and have a long night, this is an absolute winner; but don’t expect to be able to taste much at breakfast the next day.