For the most part, we can eventually find the cigars we want to review.

While manufacturers will send us cigars—an increasingly rarer phenomenon as we’ve instructed many of them to stop or at least ask us before sending anything—we almost never ask for them to send cigars. Instead, we rely on roughly eight retailers to buy most of the non-Cuban cigars we review. Sometimes, we will purchase cigars from other retailers, usually if it’s a store exclusive or if it’s something particularly limited.

Yet every once in a while, we miss out on something.

Such was the case last year when a communication error led me to think we had a box of Alec Bradley Black Market Filthy Hooligan Shamrocks reserved, which we didn’t. Once that was apparent, the cigars had left shelves at seemingly every retailer. But also by that point, word got out that there would be another release for 2020.

The Alec Bradley Black Market Filthy Hooligan Shamrock is a follow-up to the Filthy Hooligan the company released in 2013. For three years, the annual release was more or less the same: a candela-wrapped version of the company’s Black Market blend. As with pretty much every limited edition candela cigar, it was released ahead of the St. Patrick’s Day holiday.

In 2016, that changed when the company made the Filthy Hooligan a barberpole, taking the Honduran candela leaf and combining it with a Nicaraguan leaf from Jalapa. That continued up until 2019 when the company announced a second barberpole version known as the Shamrock. 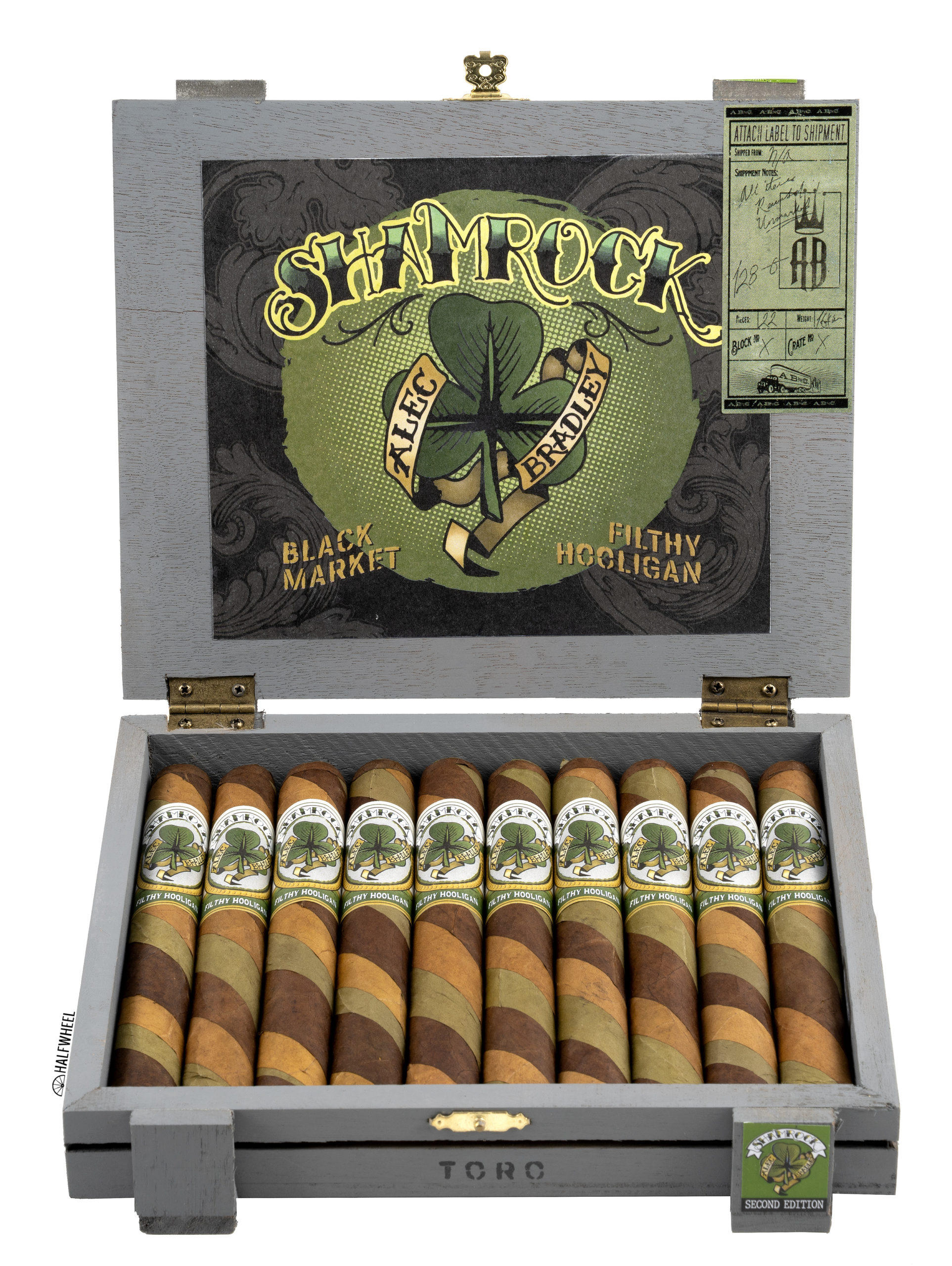 This cigar would use three different wrappers—Honduran candela along with habano maduro and habano seco of undisclosed origin—over an undisclosed filler blend. It too was offered in a 6 x 50 barberpole, but limited to just 500 boxes of 10 cigars last year and 1,500 boxes this year. 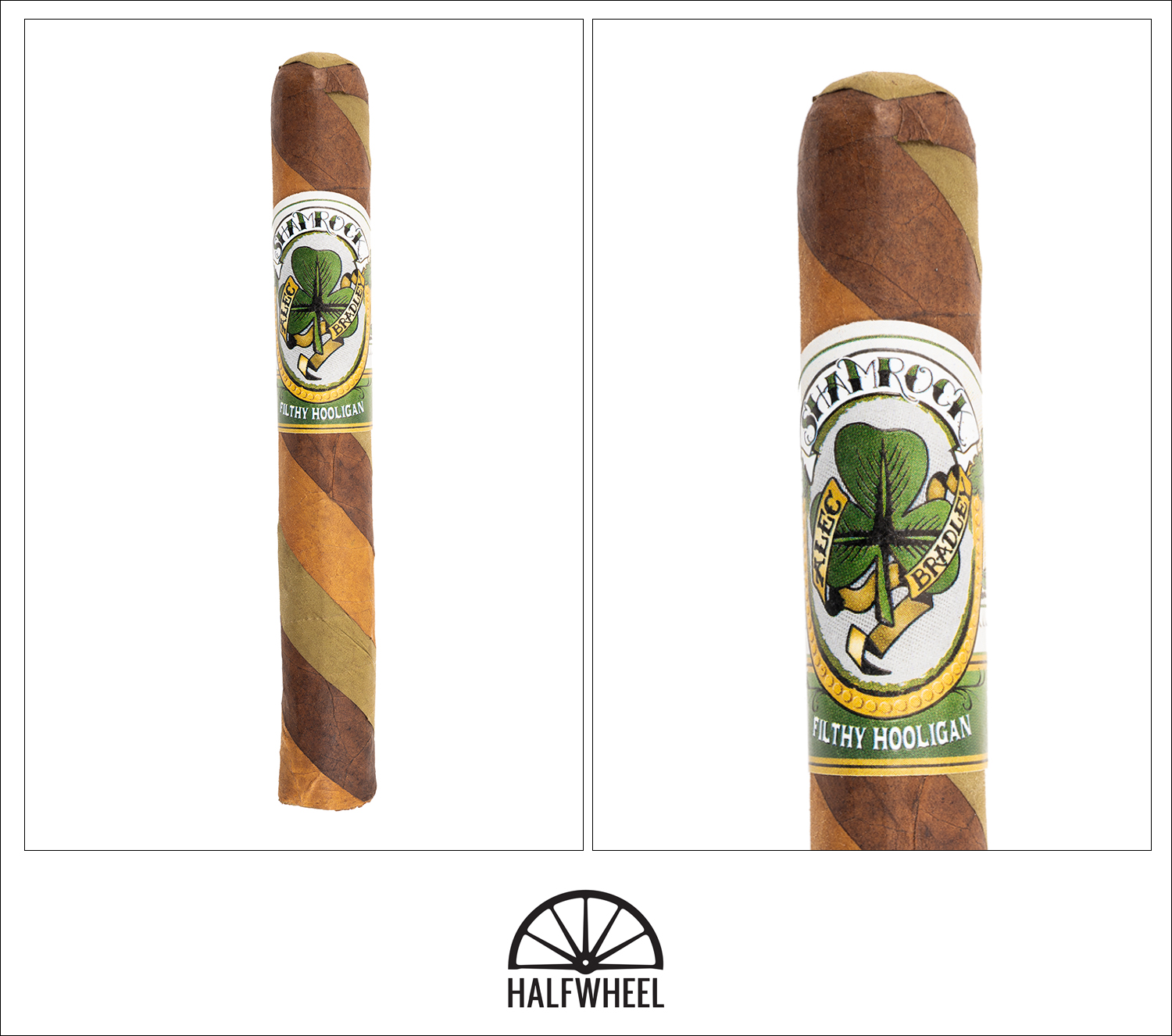 One thing that most consumers are simply unaware of is that some of the most specialized people in a cigar factory are the ones with seemingly the simplest job: matching this cigar’s wrapper to a color. These people spend all day categorizing cigars, all the same type, into dozens of different shades of brown, tan or I suppose, green. The reason behind this is that there’s a lot of variation in color between the cigars rolled by any given roller in a day and consumers are used to opening up a box and seeing identical-looking cigars. Obviously, with more types of wrappers that gets more challenging and complicating that even more is that the angles and twists in the stripes of these cigars aren’t identical. As such, it’s of no surprise that the Filthy Hooligan Shamrock’s box has cigars that don’t look entirely the same. Unfortunately, two of the cigars have some minor damage on the front of them, I opt to not smoke those. One thing I wish I had on hand was some of the regular Filthy Hooligans so I could compare the difference in wrappers, as those always seem a bit darker than the Shamrocks. Also of note—particularly once the cigars are removed from the cellophane—is that the box smells like manure. The individual cigars smell like opening a bag of beef jerky, without much in the way of manure. There’s an indeterminate sweetness, but it’s mainly just the meatiness, around medium-full. The foot is fuller and sweeter with cinnamon, caramel and sugar cookies.

The first part of the Filthy Hooligan Shamrock begins somewhat different: a medium-full mixture of grassiness and meatiness over some portobello mushroom flavor. While I don’t get a ton of the specific candela grassiness in the first few puffs, it eventually makes itself known and begins to take over the profile. That muted, semi-sweet grassiness is now the main flavor with some peanuts and earthiness right behind it. Retrohales produce a lot of vanilla and some of that candela flavor. What’s odd is that the finish is the most vibrant part of the cigar, with the candela flavors lingering before espresso, meatiness and then a sharp white pepper hits the throat. Flavor is medium-full, body is medium-plus and strength is medium. While construction is pretty good, I wish the draw was a bit looser. I can see plenty of smoke coming off the foot, but there’s a below average amount actually entering my mouth, which forces double puffing. Things get much cleaner in the second third of the Filthy Hooligan Shamrock, which allows me to taste a lot more flavor. There’s still a very noticeable candela flavor, but it’s now more of an accent to the profile. The main flavor is nuttiness, but it’s intertwined with the aforementioned grassiness. Behind that are a distinct pink salt and some earthiness. Retrohales have green licorice—something I get pretty often when smoking cigars with candela wrappers—along with nuttiness, earthiness and cinnamon. I don’t think the finish, or the main flavors for that matter, are adding much new pepper, but the back of my throat had been pestered enough that it’s still feeling the burn. Elsewhere, there’s a bit more sweetness on the finish but it’s tough to break away from the candela sensations. Flavor is full, body is medium-full and strength is medium-plus. Smoke production picks up and is now right around average, which is nice for both the greater smoke but it also means that I’m no longer double puffing. I feel like the intensity of the candela has decreased, though there are more places in the palate where the candela is accenting things. There’s an added toasty flavor and some water chestnut, both of which have that grassy characteristic. With about two inches left, the toasty flavor shifts to more of a burnt nuts flavor. It seems like the retrohales are coming from a different cigar: raspberry, toasted bread, citrus and wasabi. If I don’t retrohale, the lingering flavor is nutty, the smell of melting chocolate and meatiness. If I retrohale, it adds a ton of grassiness. The flavor is medium-plus, body is medium-full and strength is medium-plus. Barberpoles have rarely been my favorite cigars to smoke. They are super cool to look at, interesting to watch get made and fun to speculate about what they might taste like, but I can’t think of one I would truly say is an excellent cigar. In this particular case, I think Alec Bradley may have found a very narrow window for me to find some positives. If you want to be festive and smoke a green cigar for St. Patrick’s Day, but don’t really want to have to be overwhelmed by the candela flavor, the Filthy Hooligan is an answer. There’s no escaping the candela flavor—even by the final third it still seems to accent just about every puff. But this does not have the full-on barrage of the unique tart grassiness that I generally find in green-colored cigars and as such, found myself quite enjoying the cigar at a number of points, particularly in the final third.