It appears to be the same release as last year, with a barberpole wrapper, priced the same and having the same production numbers. While Saint Patrick’s Day has already passed, I still thought I’d grab one of the leftover samples I had from last year’s review of the 2016 release to see how it’s changed.

I enjoy candela wrapped cigars, but the Filthy Hooligan never really hit home for me. The blend change is a welcome one, giving us not only a new candela wrapper, but an additional traditionally cured wrapper to give the cigar more depth than just a grassy blast of candela. The mix works well, really giving the cigar a pleasant profile with the bright grassy notes complemented by earthy pepper and wood. The only downside is the burn, that was less than ideal, though on the flip side it is something I’ve come to expect with barber pole wrappers. While these are still looking like they’re available at various stores, the bad news is unless it’s a local store you’ll have trouble getting them to you before tomorrow. The good news is though, these smoke just as good on days that aren’t the 17th of March, so go grab them while they’re available and have a mini celebration of Saint Patrick on whatever day you’d like.

Visually, barberpole cigars are an eye-grabbing experiencing, even more so when you have a green and brown wrapper. The wrappers have retained their light oils with the candela being softer and the Jalapa being slightly on the rough side. When squeezed it seems the cigar has firmed up or this sample is filled evenly, as there are no specific soft spots and just has a bit of give all over. While the singular, strong alfalfa note from the wrapper is still there, it does seem to have mellowed out a little bit. The cold draw is still a smorgasbord of flavors, with fresh cut grass, hay, graham crackers, vanilla and a touch of milk chocolate.

The first third starts out with more fresh cut grass from the cold draw, followed by some light vanilla, earth, wood and only a touch of black pepper. About an inch in there is a bit of a cinnamon spice note that shows up, though it too is much more subdued like the black pepper. Moving into the second third, the grassy note still dominates the profile, while the earth, wood, vanilla, spice and black pepper are all muddled together in the background. The final third sees a bit of a shift, with the grassy note turning slightly bitter. Though the vanilla has faded away, the wood, earth, spice and light pepper continue to make a pleasant background profile despite the bitterness up front. 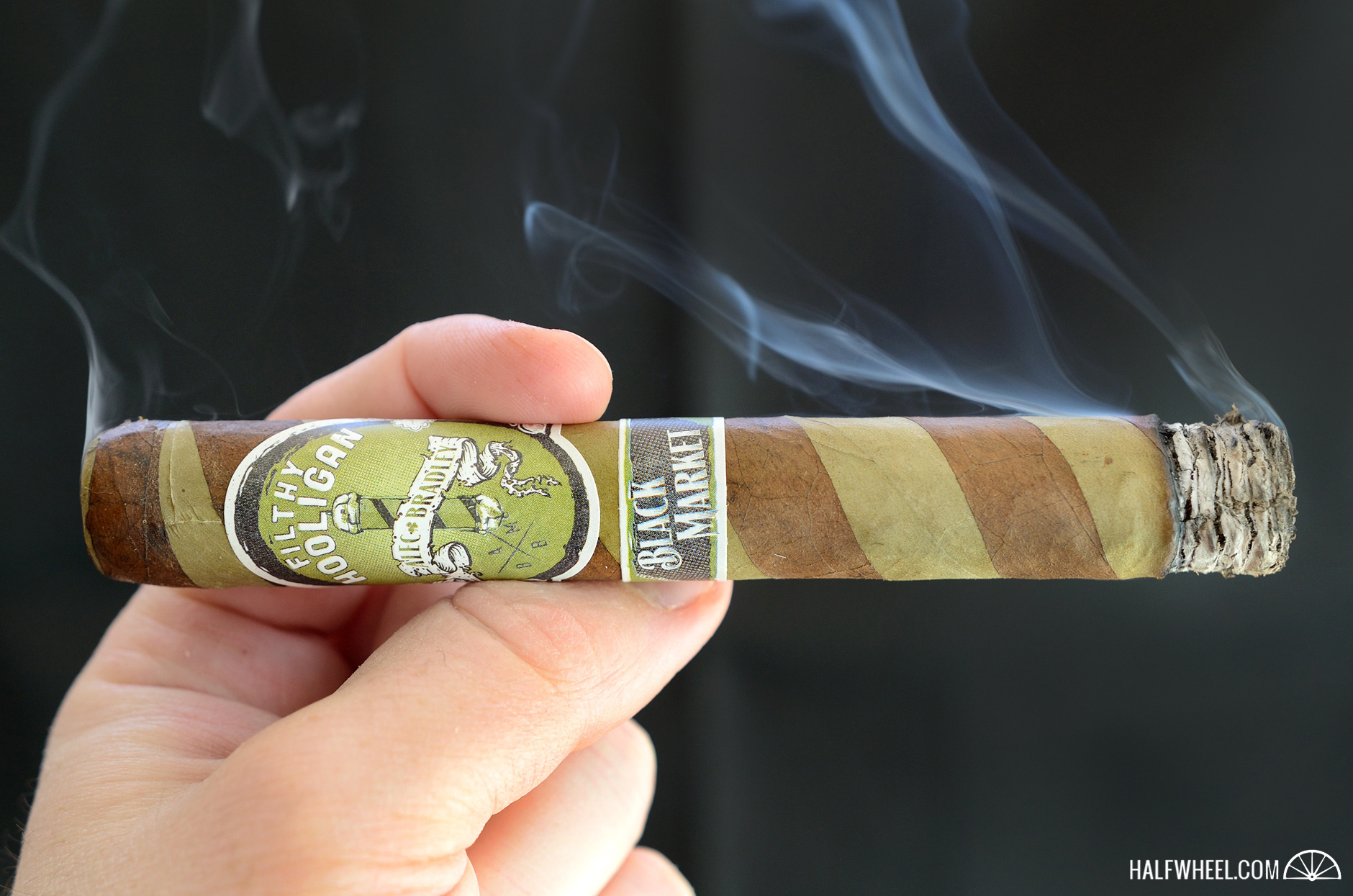 Originally the burn was an issue with the Black Market Filthy Hooligan, starting almost at the very beginning. Thankfully it appears that I’m getting more cooperation this time around, with an even and almost sharp burn line. The draw is good, almost right in the middle of ideal, producing plenty of smoke effortlessly. The ash isn’t what I would call dense, perhaps close, but not quite. It does however hold on to around the inch mark without any flaking off in my lap, which is definitely preferred. The second third does need a minor touch up, though for the most part the burn is surprisingly sharp. In the final third there is one little section that does lag behind, requiring one more touch up.

Previously my main complaint with the Alec Bradley Black Market Filthy Hooligan was the construction, with a wonky burn that didn’t want to cooperate from the very beginning. While that wasn’t a surprise with the barber pole wrapper, it was a surprise when this time around it was almost perfect. Unfortunately, the profile which was consistent from start to finish last time, took a little dip in the final third with some bitterness that knocked my enjoyment down a little. Overall it’s still a pleasant profile, albeit not an overly complex or changing one, but certainly something I’ll seek out if I’m in the mood for a candela wrapped cigar.