The annual limited edition has not been without its side stories, as when it debuted in 2013 it was announced as the Dirty Hooligan, though that was changed after a conversation between Alec Bradley’s Alan Rubin and Drew Estate’s Jonathan Drew over the use of the word dirty. The revised name wasn’t completely well received, however, as a consumer started a Facebook group that called the name “a slanderous ethnic stereotype.”

Here’s what I said about the Alec Bradley Black Market Filthy Hooligan (2014) when I reviewed it in April 2014:

I don’t know what it would take to get a candela cigar in my regular rotation, and while I don’t think the Filthy Hooligan would be something I would stock up on to have it readily available in my humidor, it has enough merit to warrant it as something to change up the pace and experience a different flavor profile, let alone something that’s enjoyable enough to celebrate the green-laden March holiday. What it lacks in flavor variation and changes, it makes up for in smoothness and commitment to its flavors with some varying levels of intensity. If you’ve yet to try a candela, or just haven’t had one that you’ve found appealing enough to go back to, the Alec Bradley Black Market Filthy Hooligan is certainly worth a single-stick audition.

The large band covering the lower half of the cigar is certainly distinctive though it limits how much of the candela wrapper you can see prior to its removal, and this one wouldn’t slid off easily, nor would the glue used it to hold it together be budged, so I resorted to getting a small corner to lift up and then slowly tearing it off, a process that took just a bit of the top leaf with it. The green shade of the candela is matte and almost muted, and of which I can’t say I’m terribly fond. The wrapper leaf is dry to the touch and shows just a few veins, one of which goes all the way up to the head of the cigar and under the cap, creating a small bump that prevents the otherwise well constructed head from sitting perfectly flat. It’s a firm cigar to the touch and doesn’t show much give, with an even roll and no noticeable imperfections. From the foot there is a sweet grassiness and note of aloe, with only a small suggestion of a vegetal note and just a bit of pepper. The cold draw is just a bit on the loose side but not problematic at this point, and has more of the vegetal and grass notes with out the sweetness, a touch of dry lumberyard wood and no appreciable pepper.

I’m struck by just how much balance there is to the first puffs of 2014’s Black Market Filthy Hooligan, as it seems like I’m tasting the blend from the get-go. I put that in italics because there isn’t a big blast of pepper or any one dominant note, but rather a blend that is marked by dry wood, some pepper, a touch of grassiness and some dry wheat notes in the background. Retrohales have just the right amount and mix of pepper, falling somewhere between white and black in terms of variety. A bit of doughiness comes into the equation as the ash reaches almost two inches in length and gets me thinking about if I’ll need to tap it off as the smaller band is clearly in its sights, while this new flavor adds texture to the smoke as well and gives it a bit more of a chewiness. While the cigar doesn’t put off a ton of smoke while at rest, when the occasional whiff of aroma does wander off the foot and into the nose it is very complex and pleasing, with just a touch of sweetness, cookie dough, chalk and white pepper. My previous concern about the ash resolves itself as the clump falls off about half an inch short of the band, with the burn line staying fairly even. 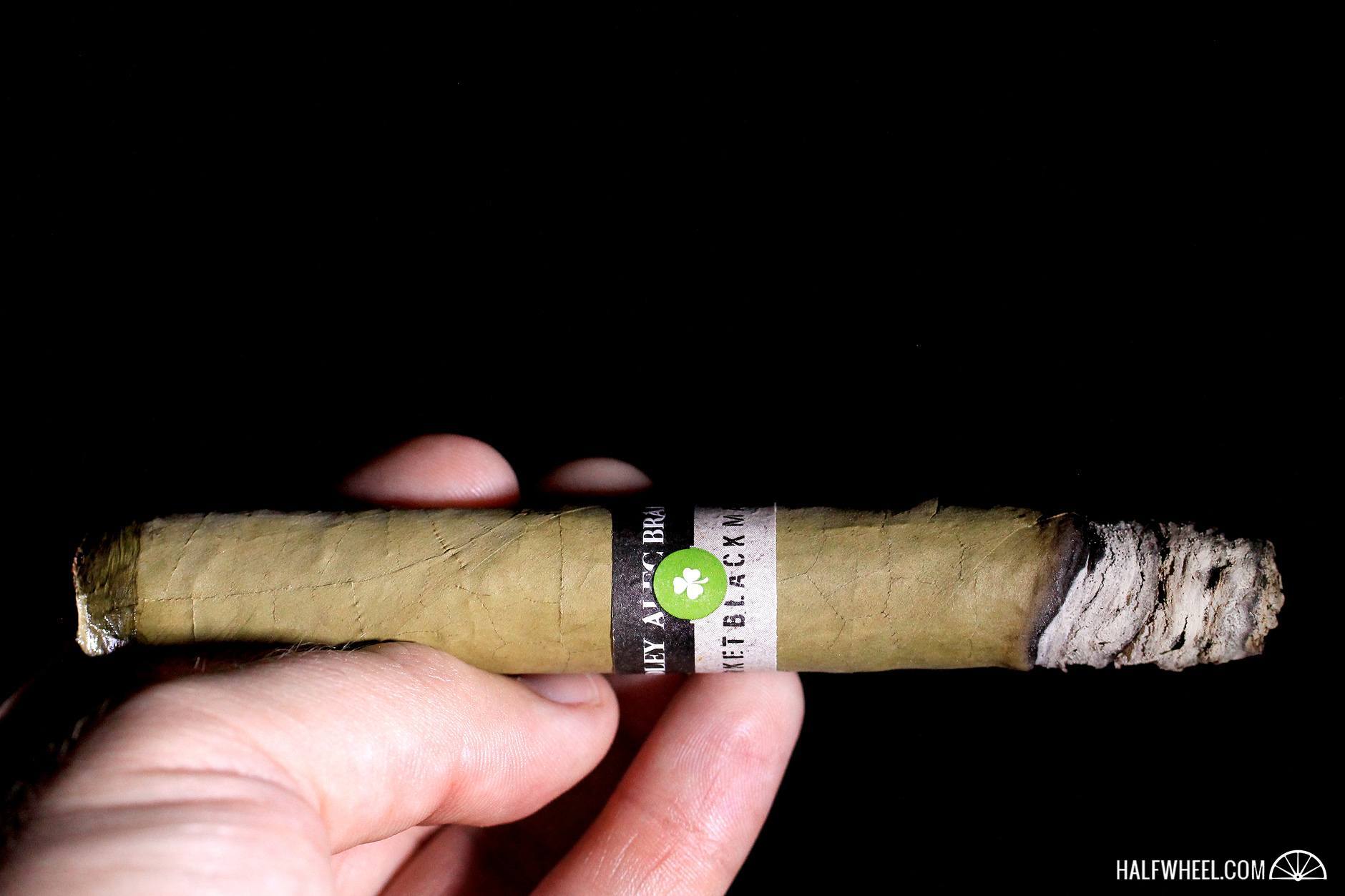 There is a slight lull in the flavors as the cigar traverses the midway point, but it’s not long before the pepper starts to ramp up just a bit and the Filthy Hooligan shows a much fuller profile than it did earlier. In some ways, it’s at the expense of complexity though it does a good job holding its balance. Everything is markedly fuller, as the strength has moved towards a medium-plus level and retrohales are much more pepper-forward, leaving a bit more of a sting than they did in the first half. The chewy mouthfeel from the doughiness found earlier has also largely vanished, as the smoke feels drier and almost brittle at points. When the cigar gets into its homestretch the pepper reaches its fullest level yet and is by far the dominant part of the flavor, while the wood is a bit sharper and the sweet grassiness has largely faded into the background. There’s also a much longer lingering aftertaste that brings the cigar to its conclusion, a decidedly different place from which it started.

In the 13 months that it's been resting in the humidor, the Alec Bradley Black Market Filthy Hooligan from 2014 did everything you hope a cigar will do—come together, mellow out the rough spots and show a more developed flavor profile. The cigar still packs plenty of strength in its second half, and as that settles down and evolves I can only see the overall profile getting better. While i wasn't sure if I would make this cigar a part of my humidor when I first smoked it, I can certainly now say that I wouldn't mind having a few more.