Alec Bradley has coined its sales representatives as Road Warriors, now some of the reps are getting their own cigars.

The company will add four new cigars, each of which was developed by a singular sales representative. Each cigar is a 6 x 52 toro that is priced at $8 and limited to 250 packs of five cigars, a total of 5,000 cigars per blend. 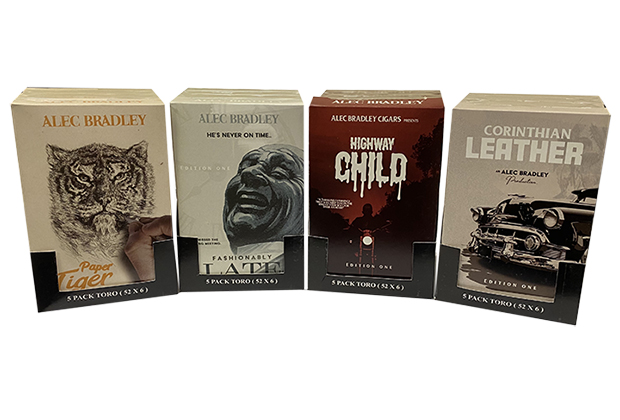 The Alec Bradley Corinthian Leather is named for Ryan Ponist, which the company called an “homage to his journey in the cigar industry, while Ponist added it was a nod to his territory’s auto industry history. It uses a Honduran wrapper, double binder of Honduran and Nicaraguan tobacco, and fillers from Honduras and Nicaragua. The cigar will be offered in West Virginia and Ohio, as well as western Pennsylvania and southern Indiana.

Paper Tiger will head to the metro New York City region, as well as New Jersey and eastern Pennsylvania, the territory manned by Jonathan Walsh. The cigar uses a Brazilian wrapper, Mexican binder, and fillers from Pennsylvania and Nicaragua. The company said that the name comes from a term for those that “talk the talk, but don’t walk the walk.” Walsh said his father instilled the converse of that principle, specifically, to “do what you say and say what you do.”

The midwestern U.S. will get the Alec Bradley Highway Child, named for Steve Tucker, who covers Wisconsin, Minnesota, Michigan, northern Illinois and northern Indiana. It features a Brazilian wrapper, Nicaraguan binder and all-Nicaraguan filler, with the name both a nod to a song of the same name.

Rounding out the quartet is Fashionably Late, which heads to the southeastern U.S., specifically South Carolina, Georgia, Alabama, Mississippi, eastern Arkansas, Kentucky and Tennessee. It uses a Brazilian wrapper, Mexican binder and Nicaraguan fillers, a blend that Christopher Carey, the sales rep for the region, sought out to have pair equally well with a morning coffee or evening whiskey.

Corinthian Leather is being at Raíces Cubanas in Honduras, while the other three cigars are made at J. Fuego Cigars in Estelí, Nicaragua.

A representative from the company said that Paper Tiger, Highway Child and Fashionably Late have been received from the factory and are beginning to ship, though due to the coronavirus/COVID-19 pandemic, it is a bit of a rolling release. No release date for Corinthian Leather has been announced yet.

Update: After announcing the new cigars via Cigar Aficionado, Alec Bradley  sent out a press release on Friday morning, which confirmed several details of the release, as well as provided some additional information, including blend details and images. The story has been updated accordingly. Additionally, the production numbers have been updated, as the company is shipping 250 packs of each cigar, a total run of 5,000 cigars per blend. The original information available stated that each line would be limited to just 1,000 cigars.