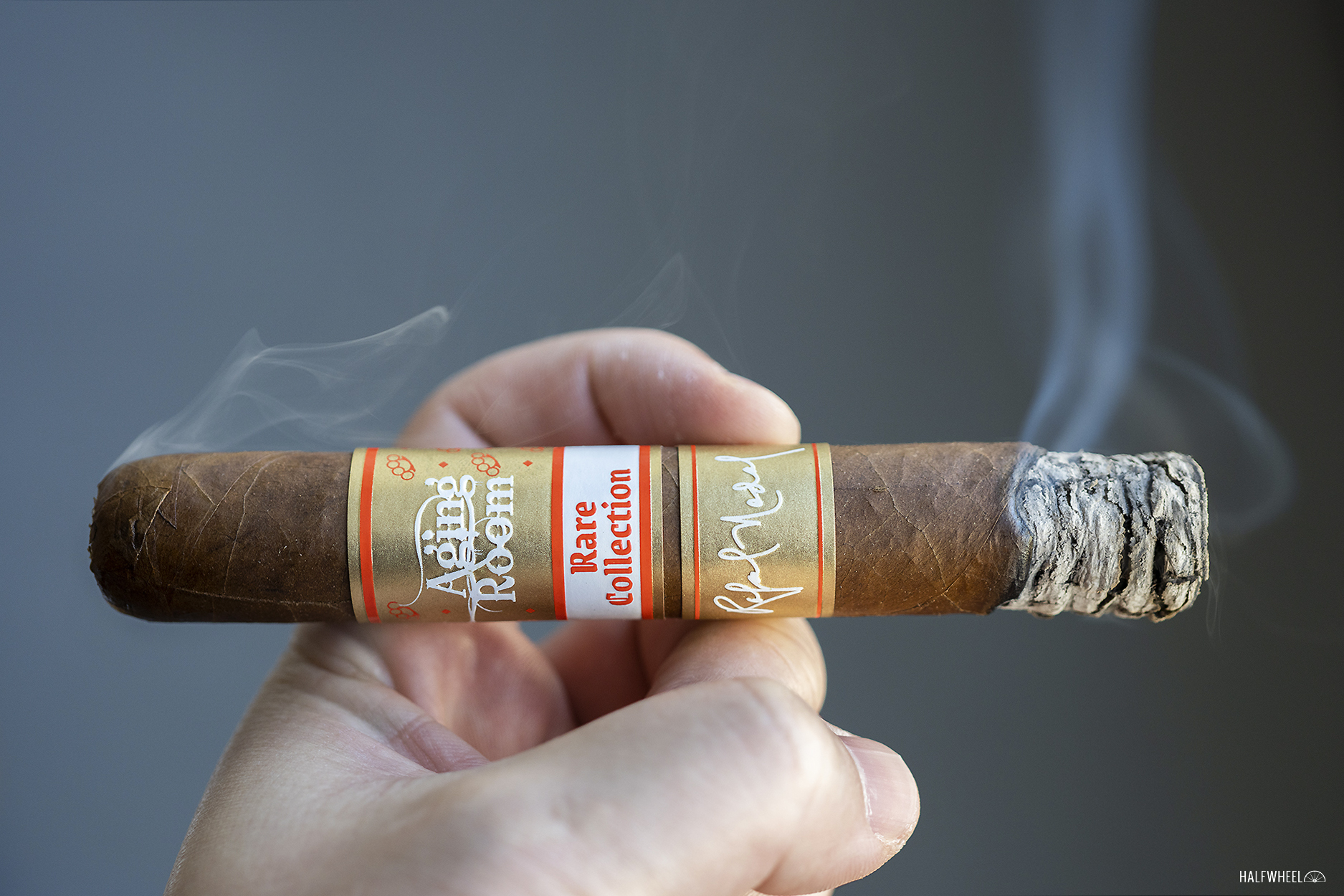 If you want to make sure as few people in the cigar world are aware of your new, upcoming product, all you need to do is announce the product right after the annual PCA Convention & Trade Show takes place. It’s a time when most—albeit less and less each year—of the cigar industry is in one place, a place that is also a trade show where hundreds of new products are introduced. Even announcing it two weeks before the trade show is well within the window of “new product fatigue” that many in the cigar world— perhaps none more so than the halfwheel staff—experience due to the sheer volume of new items announced around the trade show.

Aging Room/Altadis U.S.A. announced the new Aging Room Collection on July 13, 2021, the last day of the PCA Convention & Trade Show. It would be one thing if the company sent out a press release announcing the product on July 13 after it had shown off at the trade show, but Altadis U.S.A.—and by extension, this cigar—was not at the trade show. The more I think about it, that might be the single worst date on the 365-day calendar to do such a thing. It’s probably worse than July 10, the first day of the trade show, and I can’t really think of another day—Super Bowl Sunday, Christmas, Friday the 13th—where it would be less impactful to announce a new product for the cigar industry.

But that’s what happened. And that’s probably why many of you are unfamiliar with this cigar. Admittedly, I didn’t really know anything going into this review either, other than that this was new. As it turns out, the Rare Collection—or at least this version of it—is a Nicaraguan puro made by AJ Fernandez. That includes a hybrid Cuban-seed wrapper grown on the La Lilia farm and some pelo de oro, a golden-colored tobacco that gained notoriety after being banned in Cuba due to its propensity to develop mold.

According to a press release, “the Rare Collection series is intended to offer small runs based on the availability of rare and superbly well-aged tobaccos.” This is the first of the series and Aging Room has indicated there are likely to be future versions. 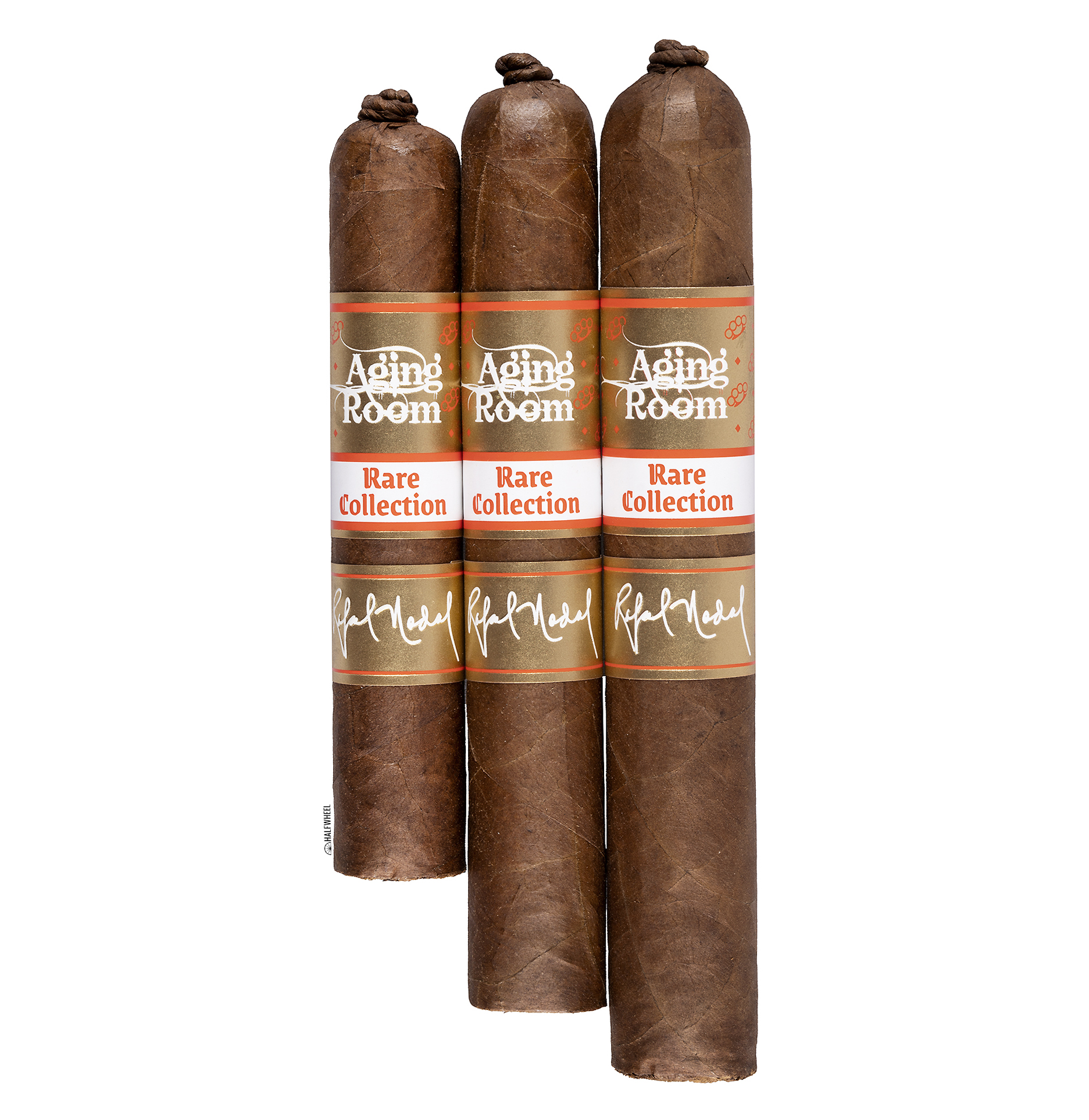 As with many Aging Room releases over the years, the vitola names are musical references. In this particular case, scherzo is a short composition. 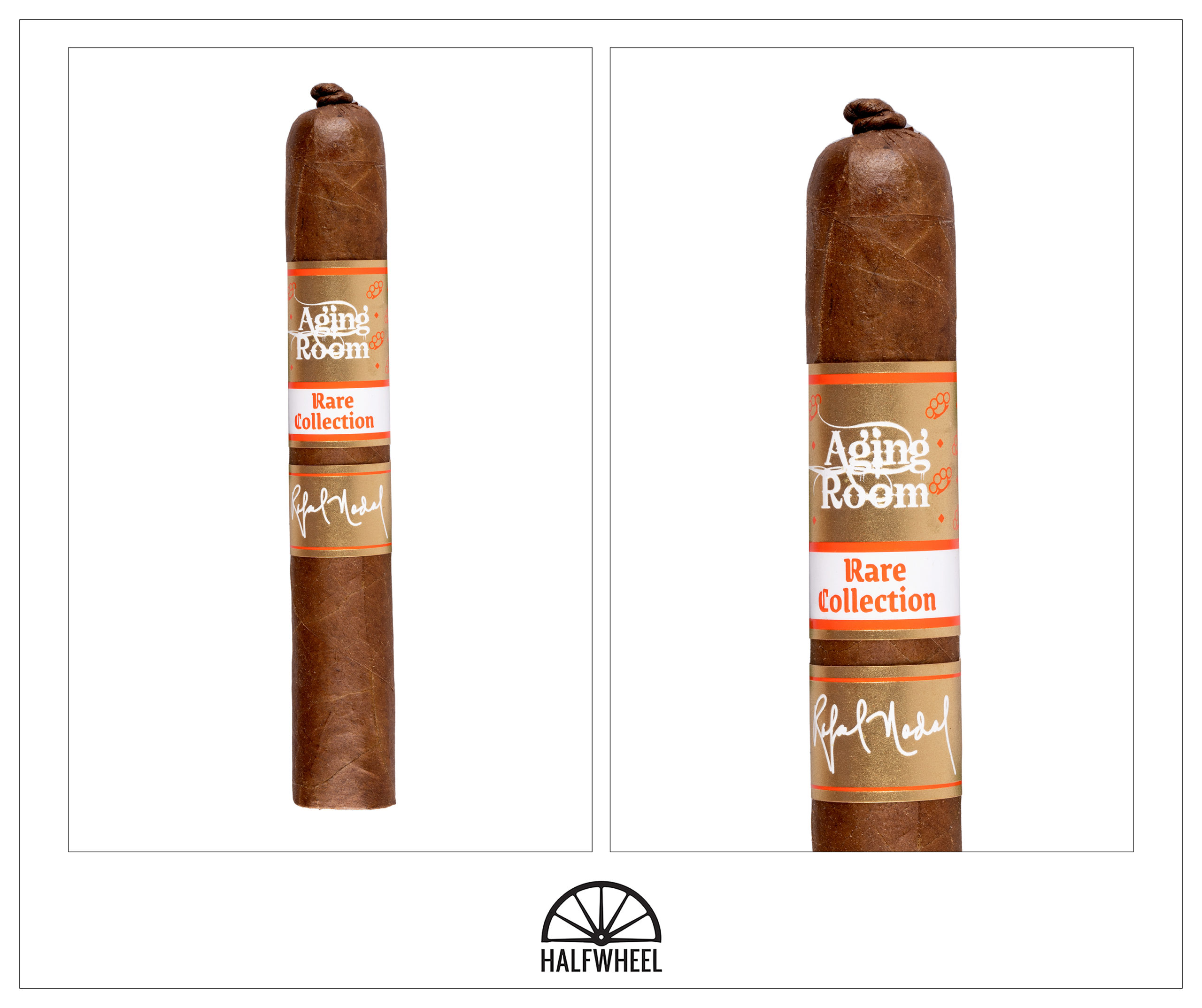 While not as egregious as some other cigars of the modern era, the two bands cover up quite a bit of the surface area of the wrapper. It’s a shame too because I think the wrapper has a great color with a decent amount of red hues and a small amount of veins. The cap itself is quite interesting with the knotted pigtail, and on one cigar it’s nearly impossible for me to find the single seam at the top of the wrapper. Aroma-wise, the wrapper smells of sweet chocolate over some raisins and acidity. The foot keeps the sweet cocoa and raisins, but there’s an added artificial creaminess that is slightly stronger than the chocolate. I can’t quite place what the creaminess exactly reminds me of, it’s both a bit too sweet and too sour for my liking. There’s also a small amount of pepper that I can smell at times, but it’s pretty mild. Cold draws aren’t as intense as the aromas would have suggested that they be. Flavor-wise, I can taste some weird citrus over the familiar sweet cocoa, artificial creaminess and raisins. At times it tastes like chocolate frosting gone wrong, other times there’s more of a mole-like sensation.

The Aging Room Rare Collection Scherzo begins with earthiness and oak over meatiness, fruitiness and an undefined sweetness. Right as the finish starts, a pretty vibrant popcorn flavor emerges, though it doesn’t stick around for all that long. About a half-inch in, nuttiness takes the top spot over cedar, oak and a mild black pepper. The finish has fruity flavors mixed with saltiness, cedar and white pepper. Retorhaling produces a vibrant nutty flavor over oak, green licorice and fruitiness. Those finish with meatiness over pretzels, nuttiness and a bright creaminess that is reminiscent of aromas I found before lighting the cigar. One sample has a gritty pepper flavor, though I don’t find it on the other two cigars. Flavor is medium-full, body is medium-plus and strength is medium-plus. I spend pretty much the entire first third guessing what the cigar’s burn rate is going to be. It feels like something is off with the draw—a puff will start too loose but finish too tight—and it also means that I can’t get the type of feedback I’d like to about how well lit the cigar is. As such, some puffs surprise me with anemic smoke production which then leads to quicker puffs. Other times it seems like the smoke production is low and I end up puffing at quicker rate than needed.

As I get closer to the middle of the cigar, I notice the texture of the smoke gets thicker, almost adopting a velvety texture, if that makes any sense. Flavor-wise, the Aging Room is a lot nuttier than before. Nuttiness leads coffee, a sweet cinnamon ice cream flavor, hay, earthiness and cedar. It finishes with an earthy core accented by toastiness, nuttiness and earthiness. Retrohales have a floral flavor—almost soapy at times—along with some earthiness and the aforementioned weird creaminess. The finish is mainly just cinnamon and that artificial creaminess. Flavor is medium-full, body is close to full and strength is medium-plus. Construction is better, though some of that might be just me getting a bit better at predicting what the cigar is doing. I still find the draw and its mid-puff inconsistencies to be quite odd. 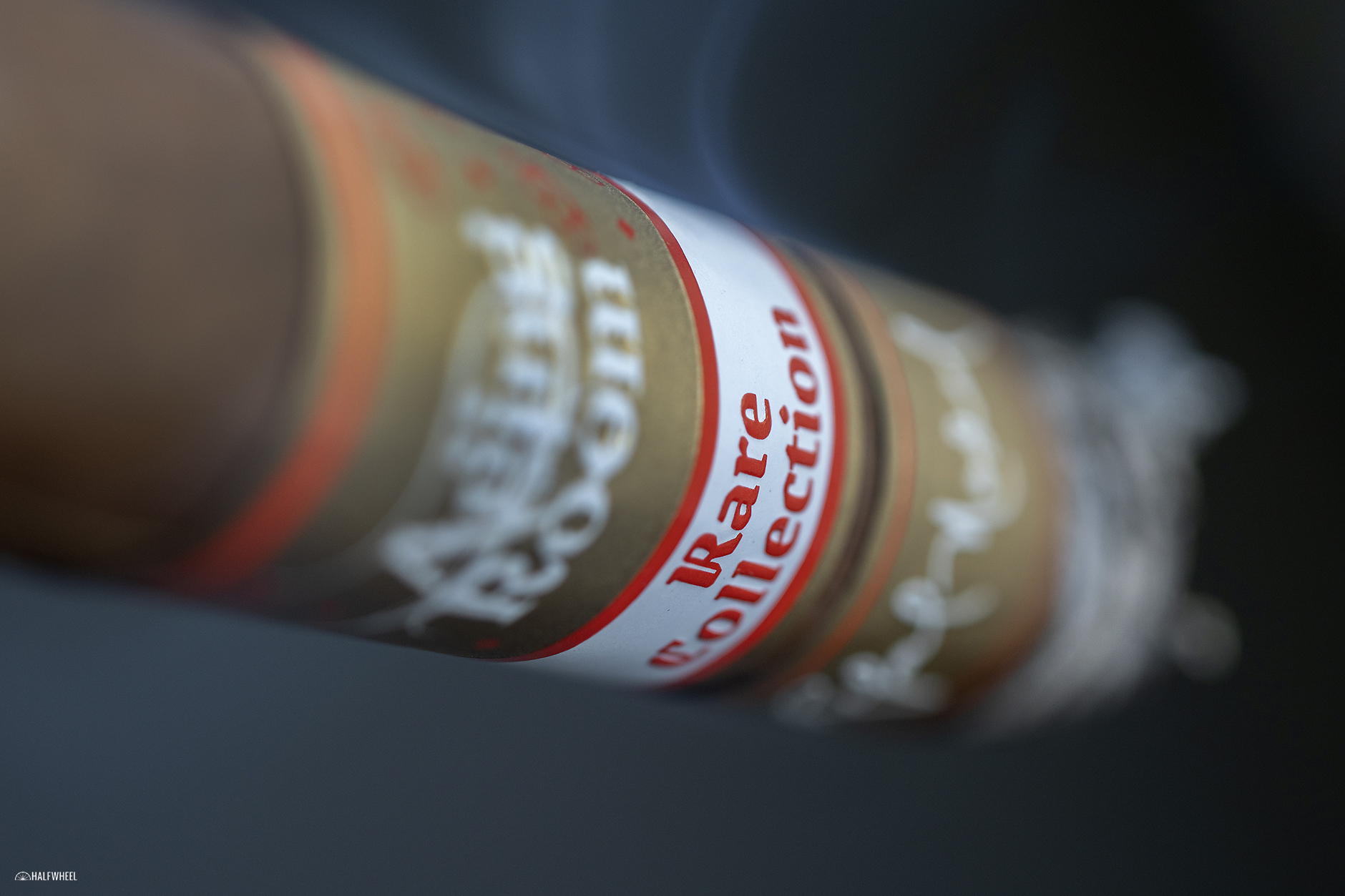 The Aging Room Rare Collection Scherzo sees the nuttiness remain as the lead flavor, though the secondary notes—leather and earth—are closer to matching its intensity. Beyond that, I find some creaminess, sunflower seeds and a faint hint of pepper. The finish has a mixture of toastiness and nuttiness along with a sweetness that reminds me of animal crackers and some isolated toasty sensations as well. Retrohales have oranges, cinnamon, the familiar artificial creaminess, toastiness and some black pepper. Once the smoke leaves my nostrils the finish shows some fruitiness joining the lingering toastiness and mineral flavors. I find the retrohales to be noticeably milder compared to both the final third’s main flavor and also how strong the retrohale was in the second third. Flavor and body both end medium-full, strength is medium-plus. Construction-wise, the good news is that I avoid having to touch up the cigar in the final third, though the bad news is I’m still not thrilled about the draw. 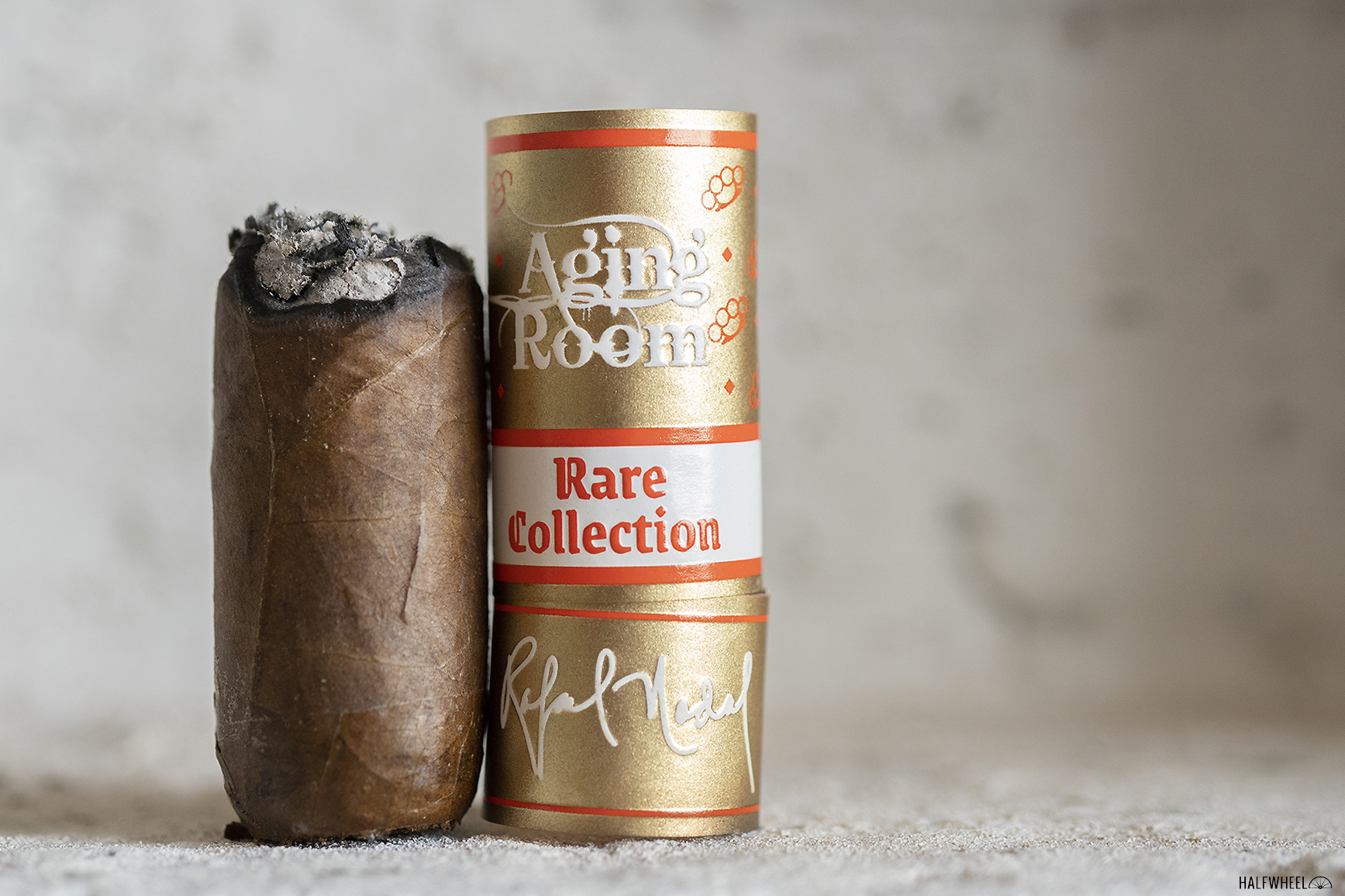 The Aging Room Rare Collection Scherzo did not have the most compelling of starts. While there wasn’t anything wrong with the first third, it pales in comparison to the flavors offered in the second and final thirds. Where the score suffers is with the construction, which I would describe as finicky. Even after lighting up three cigars, I’m still not entirely sure what the technical issue with the draws was or were, but each one struggled to provide a consistent experience from puff to puff, which caused me to both puff quicker than I wanted and also having to use the lighter to keep the cigars from going out. From a pure flavor perspective, the final two thirds of the Aging Room Rare Collection Scherzo are probably my favorite Aging Room I’ve smoked, but excellent flavor won't make up for poor construction.