Last year, Casa Fernández made a significant change to its business by changing its name to AGANORSA Leaf, a move that was made in part to pay homage to the Nicaraguan-based agricultural company that is also owned by Eduardo Fernández. While some of the company’s existing lines will get new packaging, the company also announced its first release after the branding change would be AGANORSA Leaf Signature, a four-vitola limited edition line that is composed entirely of the tobacco from the company’s farms.

Fast forward to this year’s IPCPR Convention & Trade Show, when AGANORSA Leaf showed off the followup to that blend, the Signature Maduro. As the name indicates, the new line replaces the corojo 99 rosado claro wrapper from Jalapa with a shade-grown corojo 99 seed, while the filler and binder remain the same Nicaraguan tobacco. According to the company, the wrapper on the newest release was processed for  “a long period of time” in order to bring forth the dark shade that it exhibits.

“This has been a long dream of Aganorsa going back 20 years to grow and naturally ferment a maduro cover leaf from our best fields in Nicaragua,” said Fernández, AGANORSA’s owner, in a press release. “It is in honor of Arsenio Ramos and a testament to his guidance and knowledge that we are finally able to introduce a Cuban seed Corojo Maduro leaf under shade in Jalapa for the cigar lovers of Nicaraguan leaf.”

Currently, the AGANORSA Leaf Signature Maduro is being sold in the same four sizes as the Signature Series. 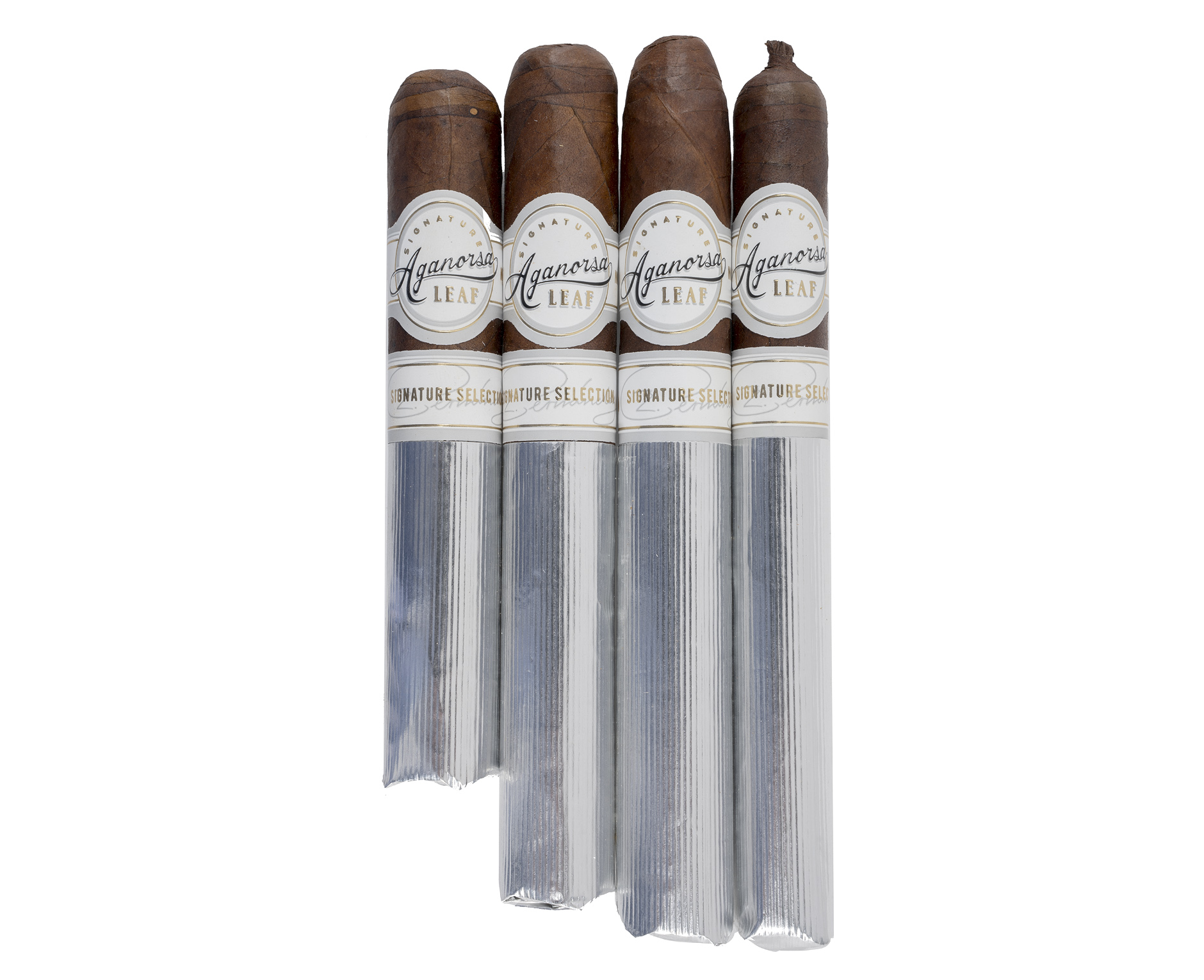 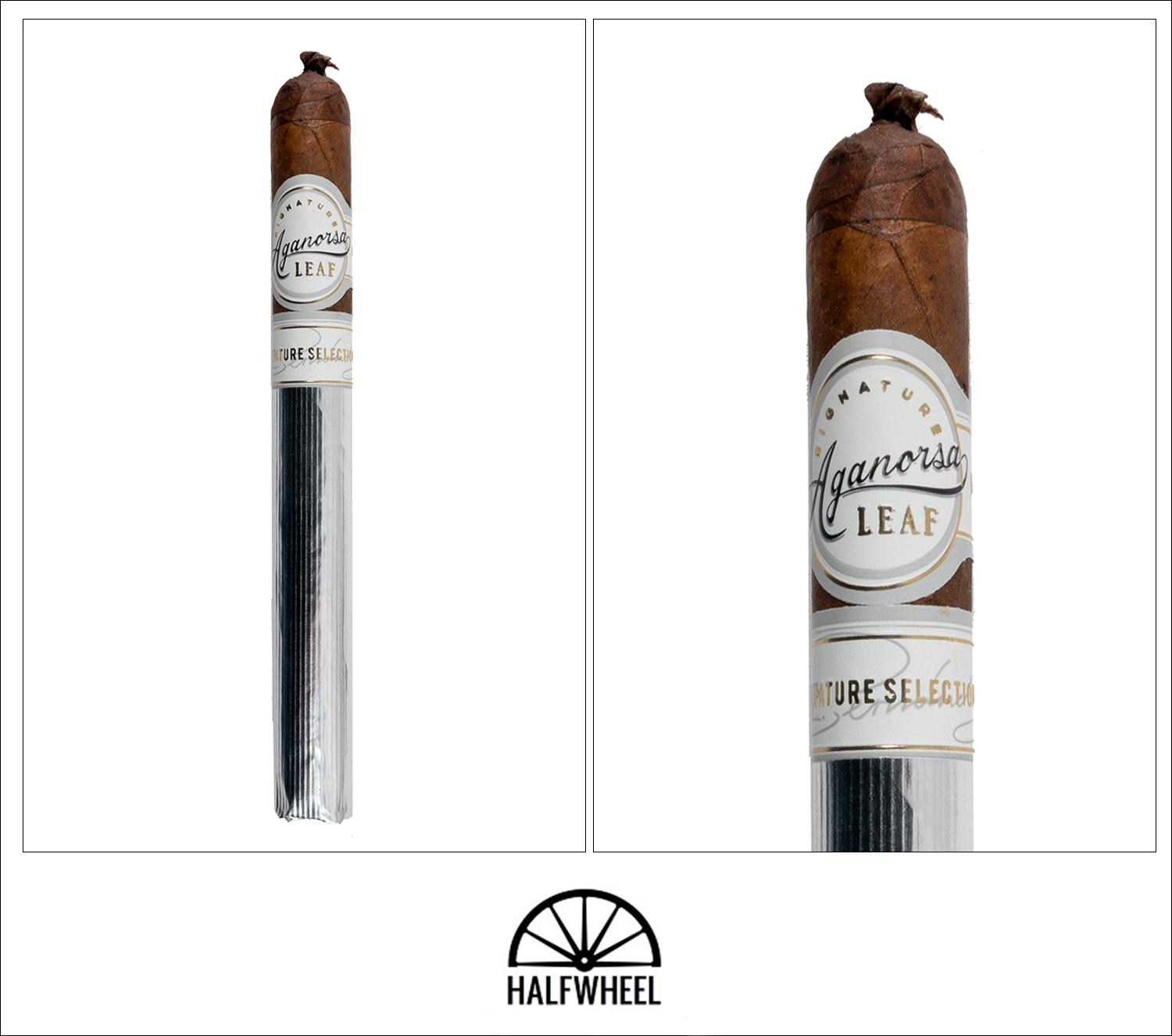 The two bands and silver foil that take up at least 80 percent of the real estate, from the very small parts I can see around the wrapper on the AGANORSA Leaf Signature Maduro is a deep espresso brown color with plenty of veins. Removing the foil foot covering confirms this and adds that there is very little oil to be seen, as well as the fact that the wrapper is fairly smooth to the touch. Aroma from the dark wrapper is a combination of strong raisins, leather, sweet manure, earth, cedar and hay, while the cold draw brings flavors of the same raisins and earth upfront as well as dark chocolate, salted peanuts, cedar,  leather, floral and a distinct caramel syrup sweetness.

After the first few puffs, the dominant flavors in the Signature Maduro make themselves known to be a combination of creamy peanuts and cedar, followed close behind by notes of cloves, leather, barnyard, earth, cedar and slight cumin. There is a noticeable amount of both spice on my tongue and black pepper on the retrohale, the latter of which combines nicely with some of the same rich raisin sweetness I noted in the cold draw. The draw is a bit tight for my tastes—albeit still well within normal limits—but the burn is excellent so far, and smoke production is higher than average off of the foot. Strength-wise, the Corona Gorda seems content to tow the line between mild and medium as the first third ends, at least for the moment.

Dark chocolate is the star of the show in the second third of the AGANORSA Leaf, taking over the dominant spot in the profile with ease, although the creamy peanuts and cedar notes from the first third are not far behind. Lesser flavors of floral, earth, leather, hay, toast and slight citrus also flit in and out, while both the black pepper and spice have receded quite a bit. The raisin sweetness is still a factor as well, although it has lost a bit of distinctness compared to the first third and seems to be fading as the second third burns down. Construction-wise, the burn continues to give me no issues at all and the draw continues to be excellent, and the overall strength has increased quite a bit, crossing the medium mark—albeit just barely—by the time the second third comes to an end. The final third of the AGANORSA Leaf Signature Maduro Corona Gorda starts out with the same dominant dark and bitter chocolate flavor from the preceding third, but quickly morphs into more of a freshly brewed espresso note, with cocoa nibs, hay, cinnamon, leather, cedar and buttered popcorn, the latter of which shows up for only about six puffs before disappearing into the ether from whence it came. The spice on my tongue that was hanging around is long gone, but the black pepper and raisin sweetness on the retrohale are both very much still strong enough to impact the profile in a positive way, with the raisin note leading the way in that regard. Unfortunately, the burn takes a significant hit and needs to be touched up twice, but the draw is as good as ever and the dense, gray smoke production continues to flow off of the foot. Finally, the overall strength take another major step forward, ending up firmly in the full range by the time I put the nub down with a bit less than an inch left. Having tried a couple of the regular AGANORSA Leaf Signature—albeit in the 109 vitola—I was eager to see what the Maduro release brought to the table. What I found was a blend that traded in a good portion of the pepper that was present in the original version for a rich raisin and earthy sweetness that really helps the balance in the overall profile. While not the most complex of blends, the richness of the dominant flavors made for a very enjoyable cigar, and the construction was a non-issue for the most part. In the end, the AGANORSA Leaf Signature Maduro is a very nice followup to what was already a pretty good blend to begin with, and one that will hit a lot of buttons for a lot of people.