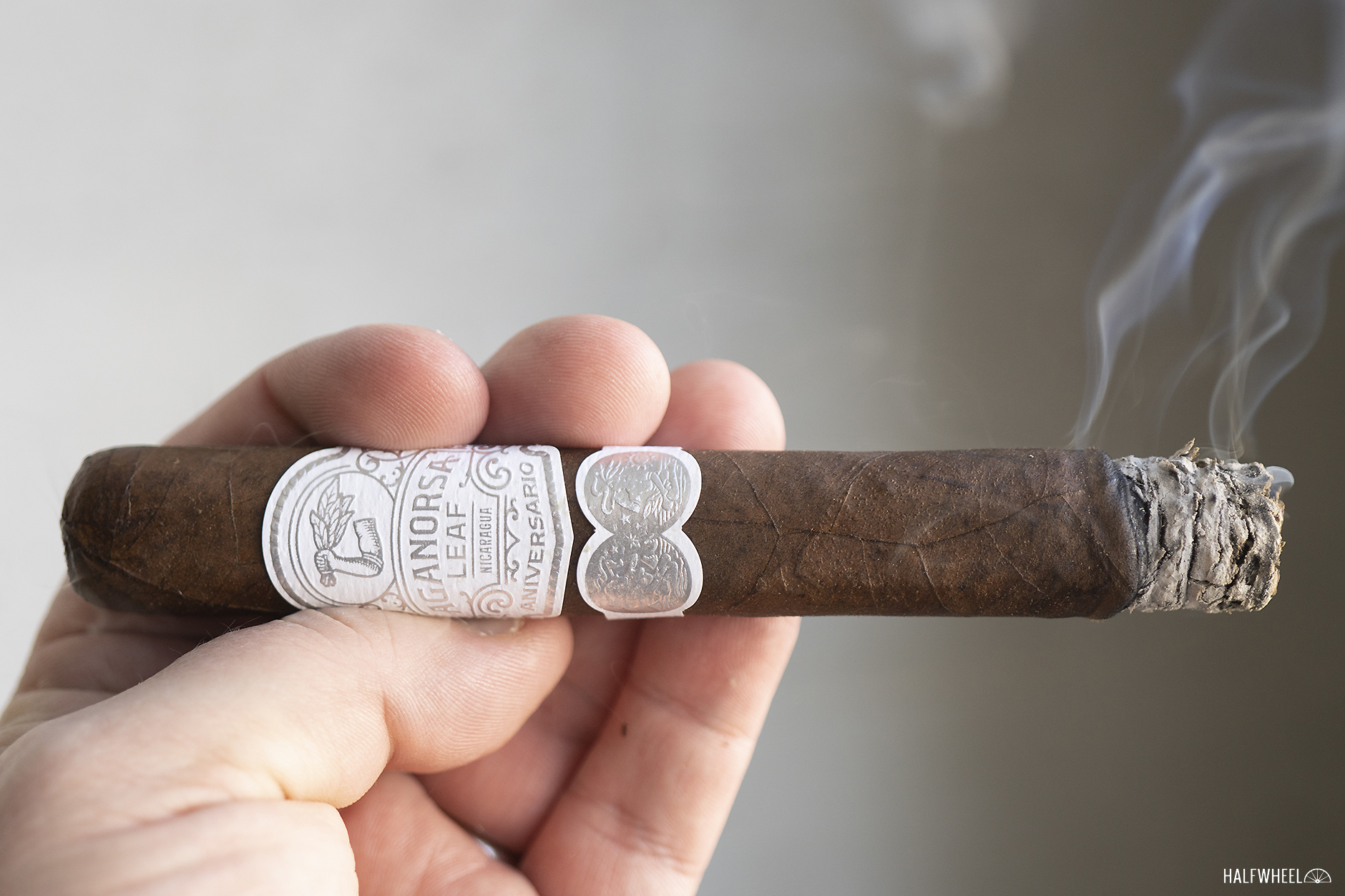 “The Aniversario Maduro blend was a massive hit last year and there was great demand for this cigar to return to the market,” said Terence Reilly, vp of sales and marketing for AGANORSA Leaf, in a press release. “We also updated the packaging to make it clear this is an AGANORSA blend when consumers see it in the humidor.”

As with the rest of the AGANORSA Leaf Aniversario Maduro line, the Toro incorporates a blend that includes a Nicaraguan shade-grown maduro wrapper covering Nicaraguan tobacco used in both the binder and filler. It has an MSRP of $13.75 per cigar and is limited to 1,500 boxes of 10 cigars, all of which were rolled at AGANORSA’s Leaf small factory in its Miami headquarters. 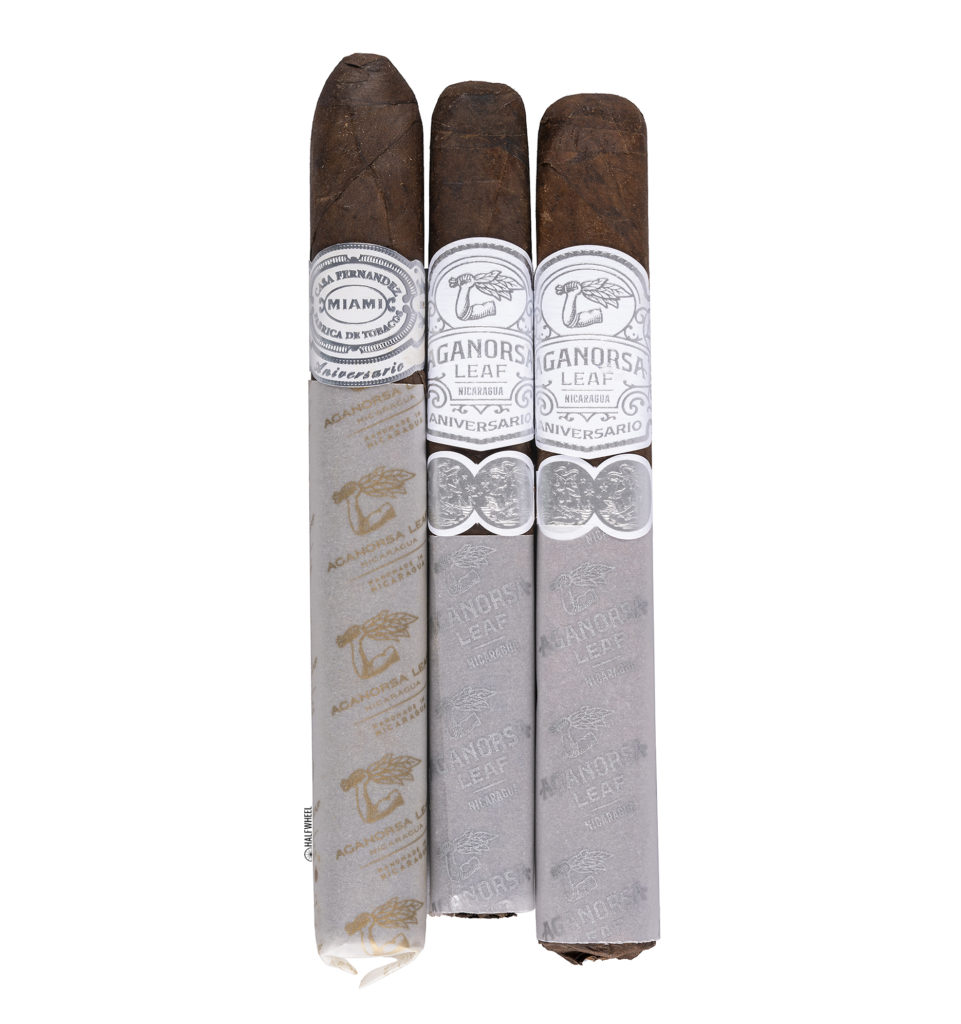 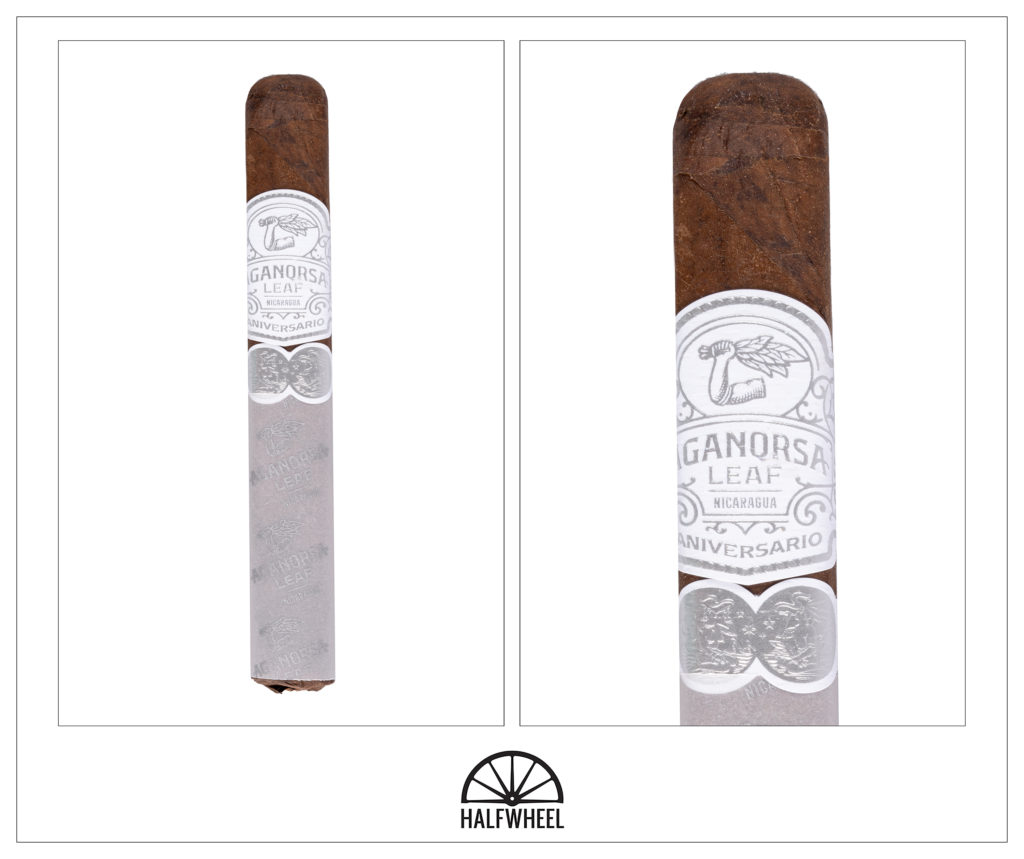 While the combination of a main band, secondary band and vellum wrap covers four-fifths of the total real estate of the AGANORSA Leaf Aniversario Maduro Toro’s wrapper, once I remove the latter I can plainly see a very nice espresso-brown wrapper that has a sandpaper roughness to the touch. In addition, there are plenty of thin veins running up and down the cigar’s length as well as some noticeable oil, and the slight box-press and covered foot are both welcomed touches. Aroma from the wrapper is a combination of strong earth, generic wood, cinnamon, manure, hay and leather, while the foot includes notes of cedar, cinnamon, orange peel, barnyard and black licorice sweetness. Finally, after a v-cut the cold draw features flavors of creamy oak, cinnamon, earth, leather, baker’s spices, black pepper and vanilla bean sweetness.

The AGANORSA Leaf Aniversario starts off immediately with quite a bit of spice on my lips and tongue, interspersed with a distinct leather tack note that slowly transitions to the main flavor combination of earth and cashews. Additional notes of oak, hay, cinnamon, leather, cocoa nibs and roasted coffee beans flit in and out, while the retrohale features significant black pepper as well as some light vanilla bean sweetness that seems to be pulled directly from the cold draw. In terms of construction, the draw is excellent and there is an enormous amount of thick, gray smoke. While two samples had no issues with the burn, the third needed a single correction with my lighter. Flavor and body are both at medium, while the strength hits a point just under medium by the time the first third comes to an end. 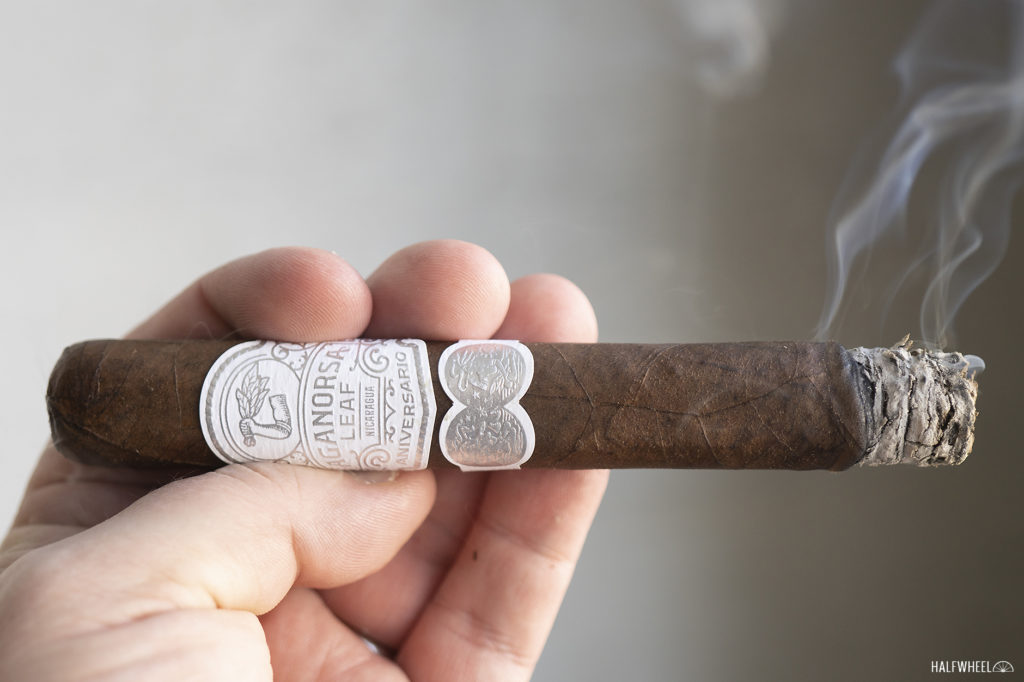 Coming into the second third of the cigar, the profile shifts a bit: although a gritty earth note easily remains one of the main flavors, a distinct charred meat flavor replaces the cashews note from the first third, while a green pepper flavor has shown up on the finish. Secondary flavors of cocoa nibs, leather, generic nuts, oak and hay show up at various points, and with the amount of black pepper on the retrohale receding a bit, more of the vanilla bean sweetness emerges. Construction-wise, both the draw and smoke production continue along their excellent path, and the burn on all three samples was trouble-free, albeit far from razor sharp. Flavor has bumped up to medium-full, body is slightly above medium and the strength has increased enough to hit a point above medium by the end of the second third, and it is still rising. 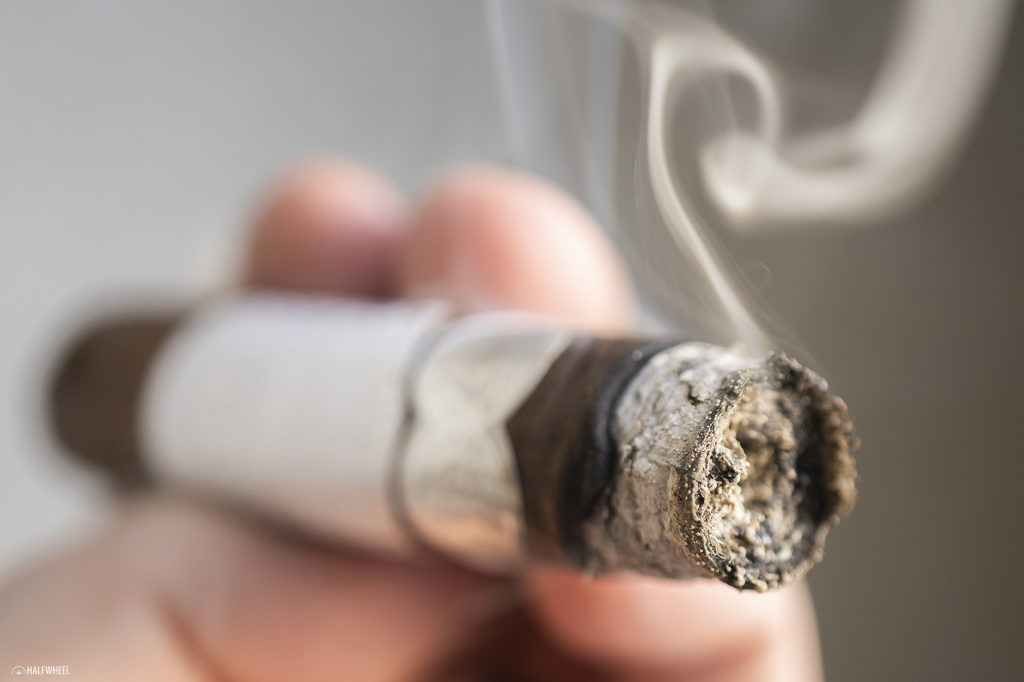 The final third of the Aniversario Maduro Toro follows the trend of the second third, with the same main flavors of gritty earth and charred meat followed by notes of hay, dark chocolate, brewed espresso, leather, oak and a slight bit of cinnamon. In addition, while the amount of black pepper on the retrohale has decreased even more compared to the second third, the vanilla bean sweetness has increased slightly. As for the finish, the green pepper note is still present. The draw, burn and smoke production are all humming along in almost perfect harmony, with virtually no issues between the three of them. The cigar ends with its flavor just under the full mark, body finishes at medium-full, and the strength hits the full mark just as I put the nub down with just under an inch remaining. 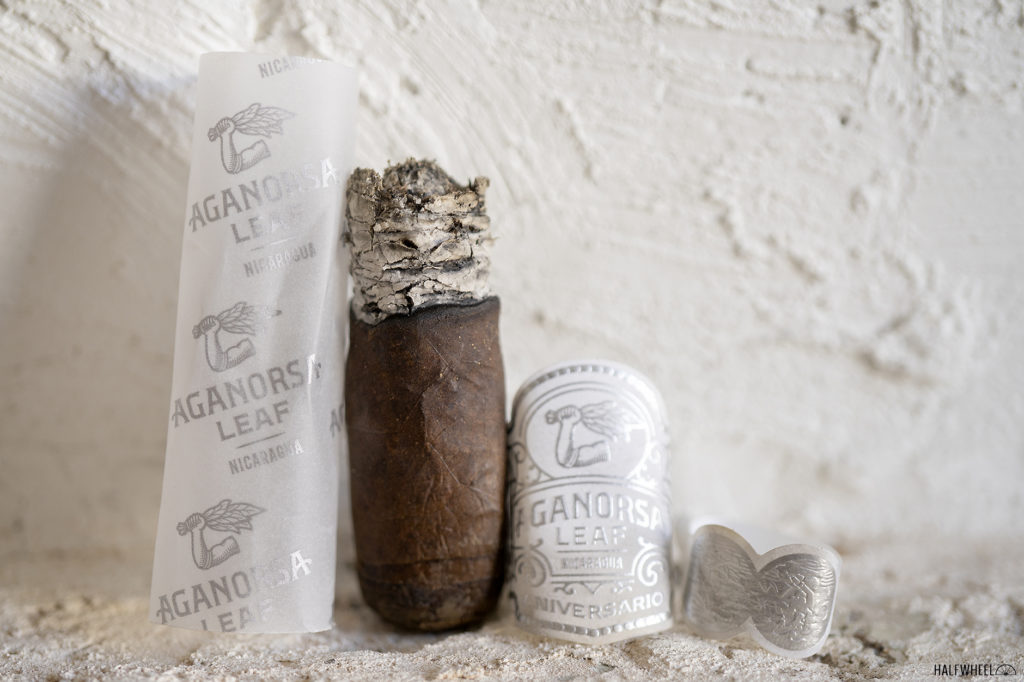 While the AGANORSA Leaf Aniversario Maduro Toro starts out with an aggressive spice, pepper and earth combination, it was never overwhelming enough to push out the other main flavors in the profile, a list that include cashews, charred meat and oak. In addition, there were some very interesting additional parts of the profile, including some distinct vanilla bean sweetness—which gets more distinct as the cigar burns down—and a green pepper note on the finish in the final two thirds. In the end, the AGANORSA Leaf Aniversario Maduro Toro is an impressive addition to the company’s portfolio: strong yet smooth, well-balanced and quite well constructed.