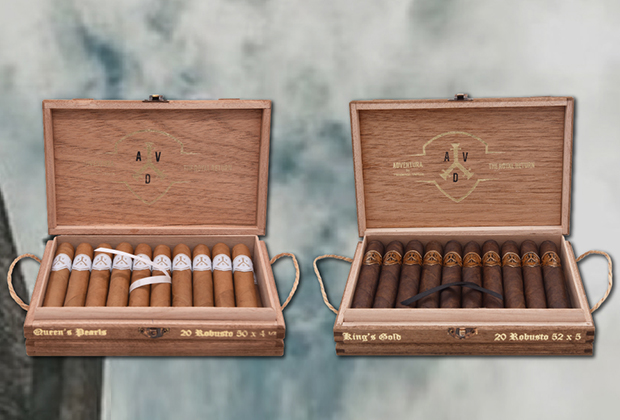 The story of ADVentura will add two new chapters later this month, as The Royal Return is slated to make its U.S. debut with two distinct blends, named Queen’s Pearls and King’s Gold.

The Royal Return Queen’s Blend uses an Ecuadorian Connecticut wrapper and binder, with the fillers coming from the Dominican Republic, Ecuador and Nicaragua. The company says that the tobacco used in the blend has been aged for five years, while the finished cigars received four months of aging before being released. It is being offered in three sizes:

The company calls Queen’s Pearls its take on a classic Connecticut smoke, delivering a profile that is light on the palate but offering a more lingering flavor after each puff.

The Royal Return King’s Gold uses a Connecticut broadleaf wrapper grown in the U.S., while the binder comes from Mexico and the fillers come from the Dominican Republic, United States and Nicaragua. Like Queen’s Pearls, the tobacco has been aged for five years and the finished cigars rested for four months in the factory’s aging rooms. It is available in two sizes:

Both cigars are made at Tabacalera William Ventura in the Dominican Republic, and both will be ongoing productions. However, given the supply of challenge of Connecticut broadleaf, King’s Gold may experience stretches where it is not available to ship to retailers.

In addition, the cigars will also be available in Switzerland, Germany and the Netherlands, among other countries. Shipping is scheduled to begin in the next two to three weeks.

The ADVentura line is the creation of Marcel Knobel, a Swiss sommelier and coffee producer and retailer, and Henderson Ventura of Tabacalera William Ventura. The company was founded in 2016, with its first cigars released in Europe in 2017. It launched in the U.S. in the summer of 2019 with ADVentura The Conqueror, which introduced stateside consumers to the legend of ADVentura, an explorer who travels the world. Each line of cigars include a new chapter in his adventures.