I’ll try my best to spare the rock solid jokes, but it is unique to see a humidor made out of rock. That of course is the selling point for adorini’s Black Slate Deluxe L ($550), a large desktop humidor that features a unique slate shell surrounding a classic Spanish cedar inside.

Because of the rock structure and patterns each humidor is unique. Officially, the exterior measures nine inches long by 14 inches wide with six inches of height. Outside, it looks like someone attempted to make a shoebox out of rock. Inside, bright Spanish cedar glows compared to the dark and dull exterior.

As much as I love the way the humidor looks, the slate seems uniquely prone to water stains. After one tiny spill, I became much more conscientious around it than I was with any of the other desktop humidors I’m currently using. It’s also not black, not remotely close to black, which I will suppose will be relevant for those purchasing this solely as an accessory for a specific room. 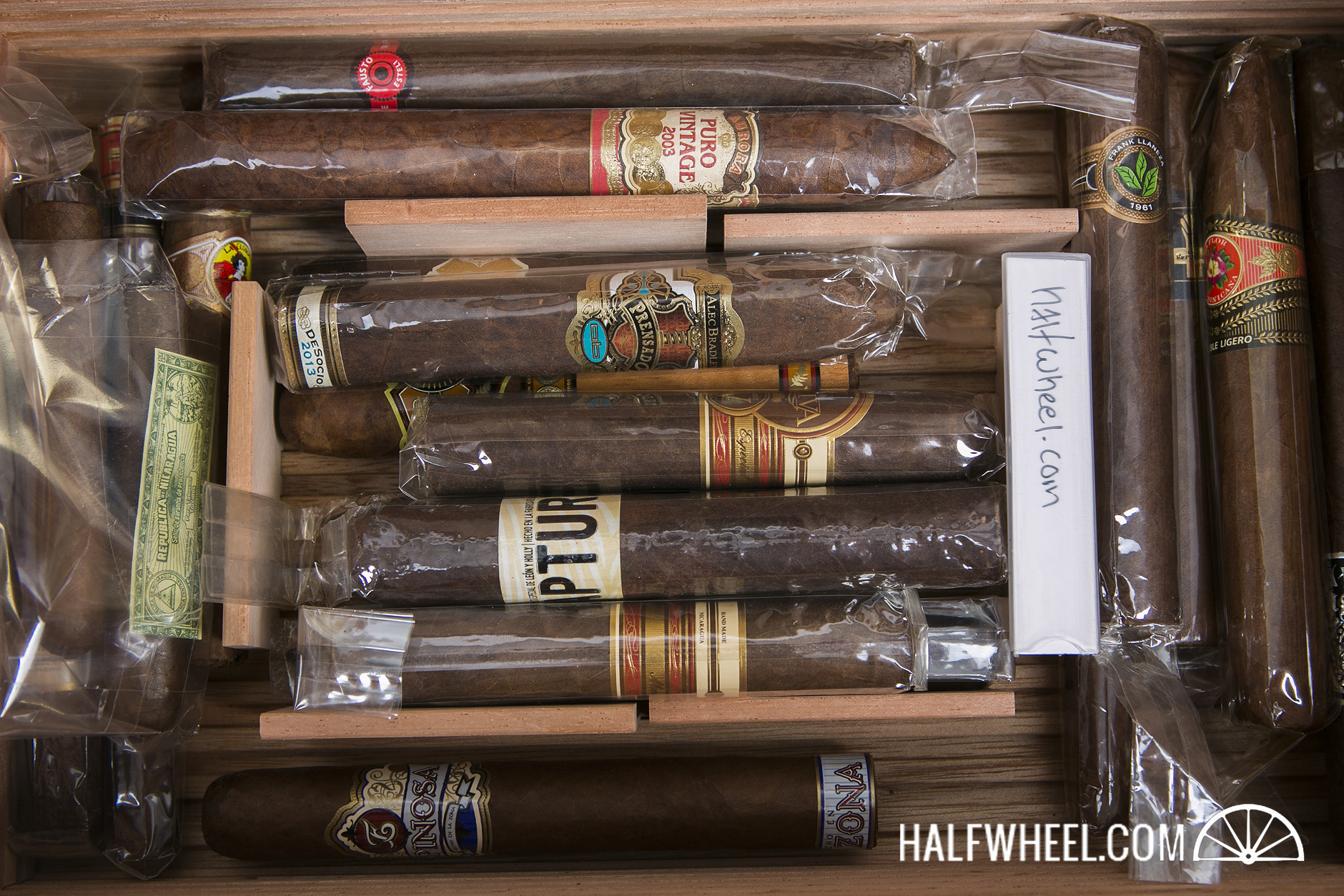 There’s a lot of good in the inside. adorini’s unique ribbed design allows for cigars to be stored in perpendicular directions in the bottom area. The company includes labels that attach to the top of the dividers that seem ideal for long-term aging or identifying cigars without bands on them. The ribbed design also promotes better airflow, particularly when using an electronic humidification system, something the upper tray is designed specifically for. But the large gap in the middle of the tray, which would allow for the use taller electronic humidifiers also reduces capacity of the humidor, probably to the tune of around 30 robustos.

While most humidifiers attach to the lid horizontally, in order to maximize the space of the adorini’s design, you need to rotate the included humidifier vertically. Turning the humidifier 90 degrees allows for two rows of cigar to easily fit while the humidifier fills the space created by the tray, which would otherwise be valuable wasted space. It’s not without a flaw, as the lid is only magnetized down the center, meaning there is nowhere to attach the humidifier up top. 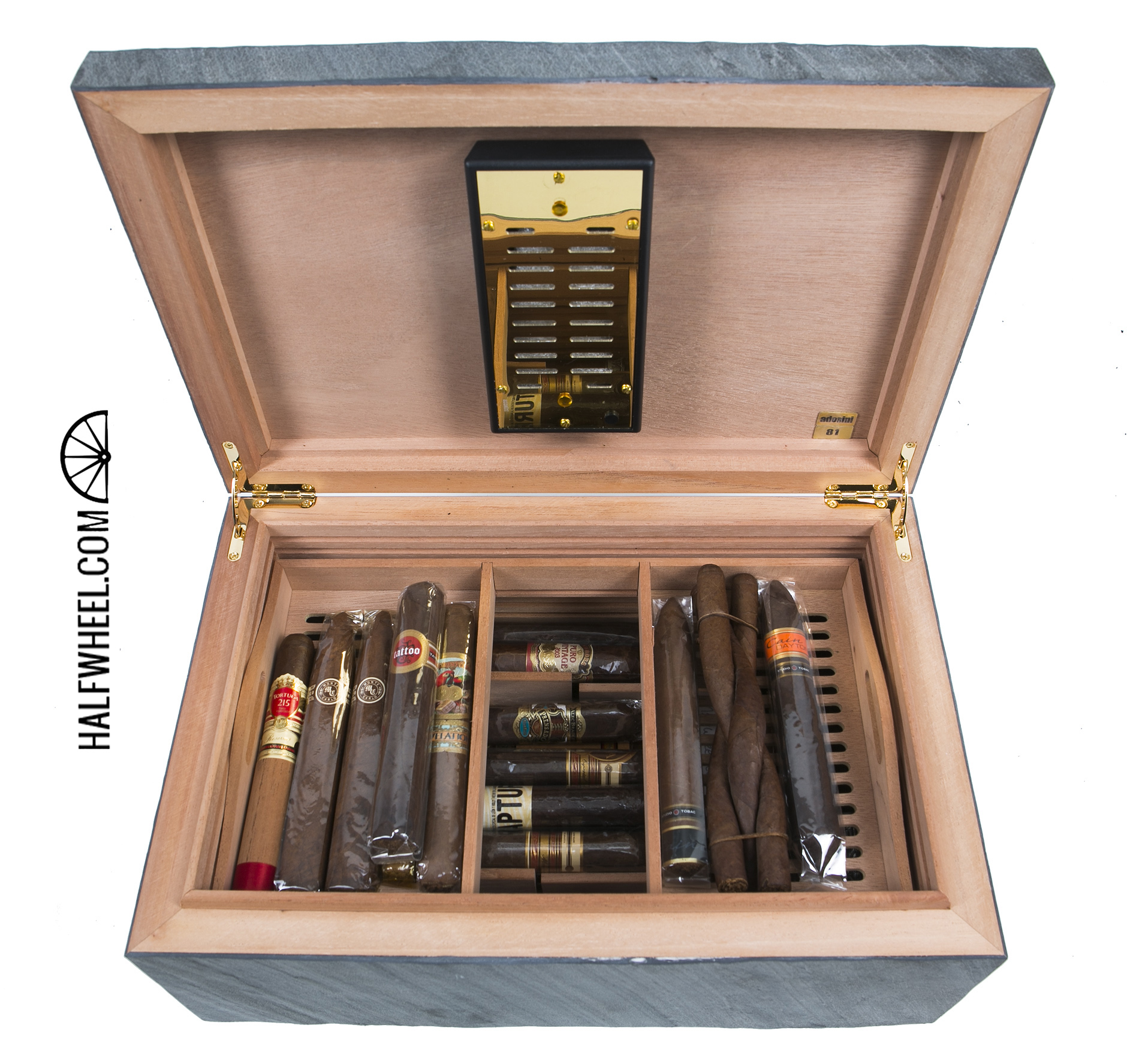 Utility-wise, you judge a humidor by its seal. After a few months of use, I have nothing but positives to say about the Black Slate Deluxe L. A familiar whoosh when the humidor was opened and it passed a light test with flying colors. There is no lock, something that I find does a better job at improving seal than keeping people out of humidors, but it doesn’t seem necessary. With two Boveda packs and 65 cigars, the humidor performed flawlessly at keeping the desired humidity.

The humidor comes with an adorini humidifier, a device that uses acrylic polymers. When opening the humidor daily, I saw humidity stay between 68-70 percent relative humidity.

However, three days of not opening the humidor left a 74 percent relative humidity environment. The device, which can be purchased separately for $76, is supposed to provide 70 percent relative humidity and like so many of the non-active devices, it oftentimes just puts out too much humidity. If I used this humidor with the included humidifier I would most certainly add a few Boveda packs if nothing else but to regulate humidity, which is currently how my humidor sits. 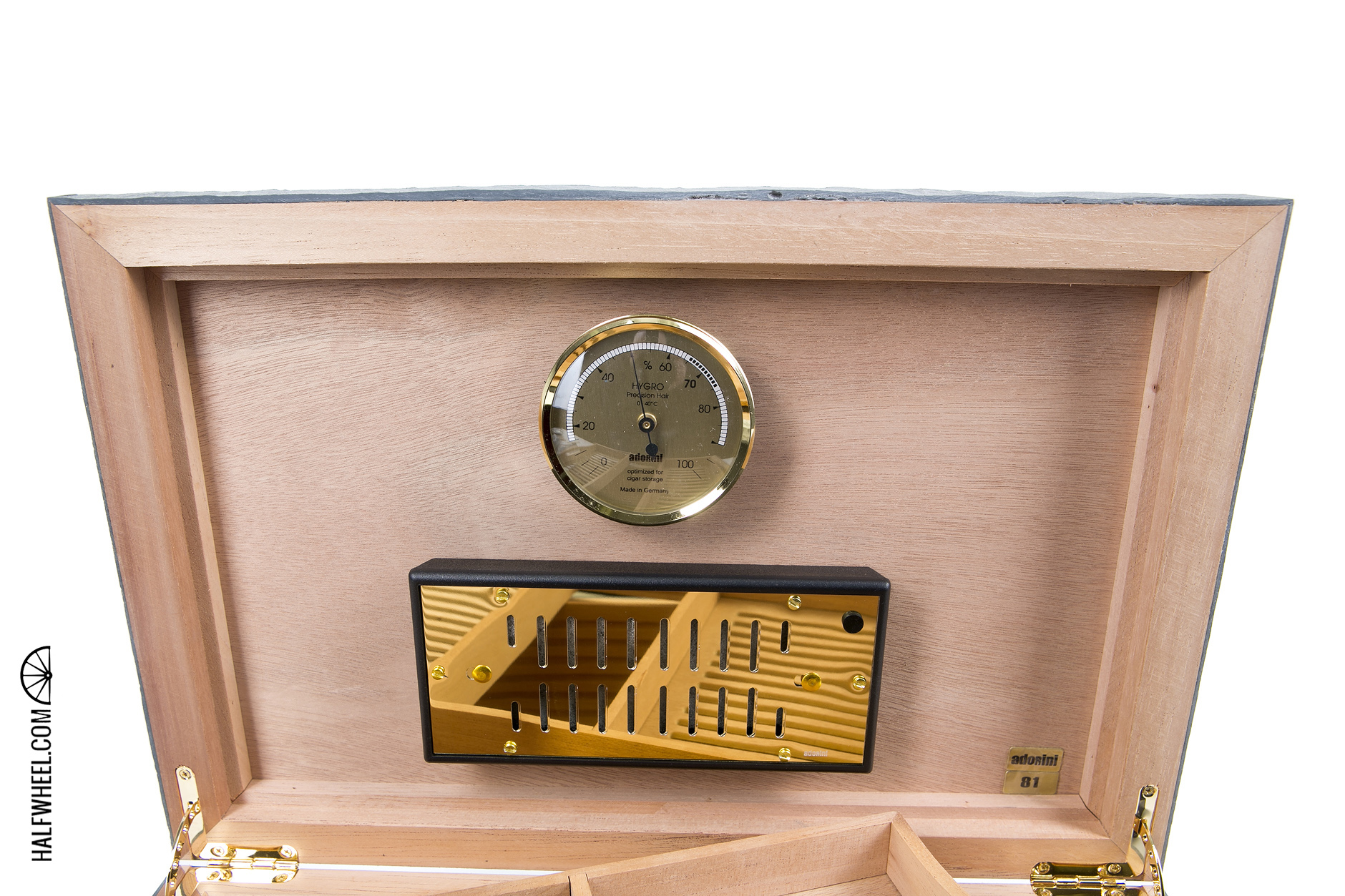 Analog hygrometers oftentimes get a bad rap. I found the included adorini unit’s readings to be consistently identical to those of my scientific hygrometer, although three months is hardly enough time to test this sort of device.  My one complaint regarding the hygrometer actually has to do with size, as it’s a bit large, particularly if it’s not attached to the lid. On my unit the magnet also failed to stay attached to the back of the hygrometer. It was nothing a little bit of glue could not fix, but an annoyance nonetheless.

At $550 the adorini Black Slate Deluxe has a steep price. The good news is, the unit works. Trying to fit anymore than 150 cigars would be a task, particularly if you use the humidor with all of its included pieces. However, when you are spending this kind of money, you are likely looking for a device that just works and matches the appearance you want.

The similarly-sized adorini Novara L retails for $200 less than the Black Slate. Models from Savoy are priced around $200, while Daniel Marshall options start at over $800. None of those alternatives have one thing on the Black Slate Deluxe: rock. If you want a rock humidor, the logical place to turn to would be Vanderburgh, a Canadian company that specializes in custom humidors. Expect to pay well into the thousands for that humidor, so in at least one way, you can find substantial value in the Black Slate Deluxe L.

Ultimately, the humidor works well. I would not use the included humidification system (performance) or the analog hygrometer (space), but you get a well-built unique humidor. It’s a winner.

The unit for this review was provided to halfwheel by Humidor Discount. You can purchase the Black Slate Deluxe L here.