I have had the AcuRite 00325 hygrometer ($12) for a while. I bought it quickly after I first saw it last spring figuring that I would quickly review one of the more popular hygrometers on the market, but it got delayed, and delayed, and forgotten, and delayed. And then finally reviewed. 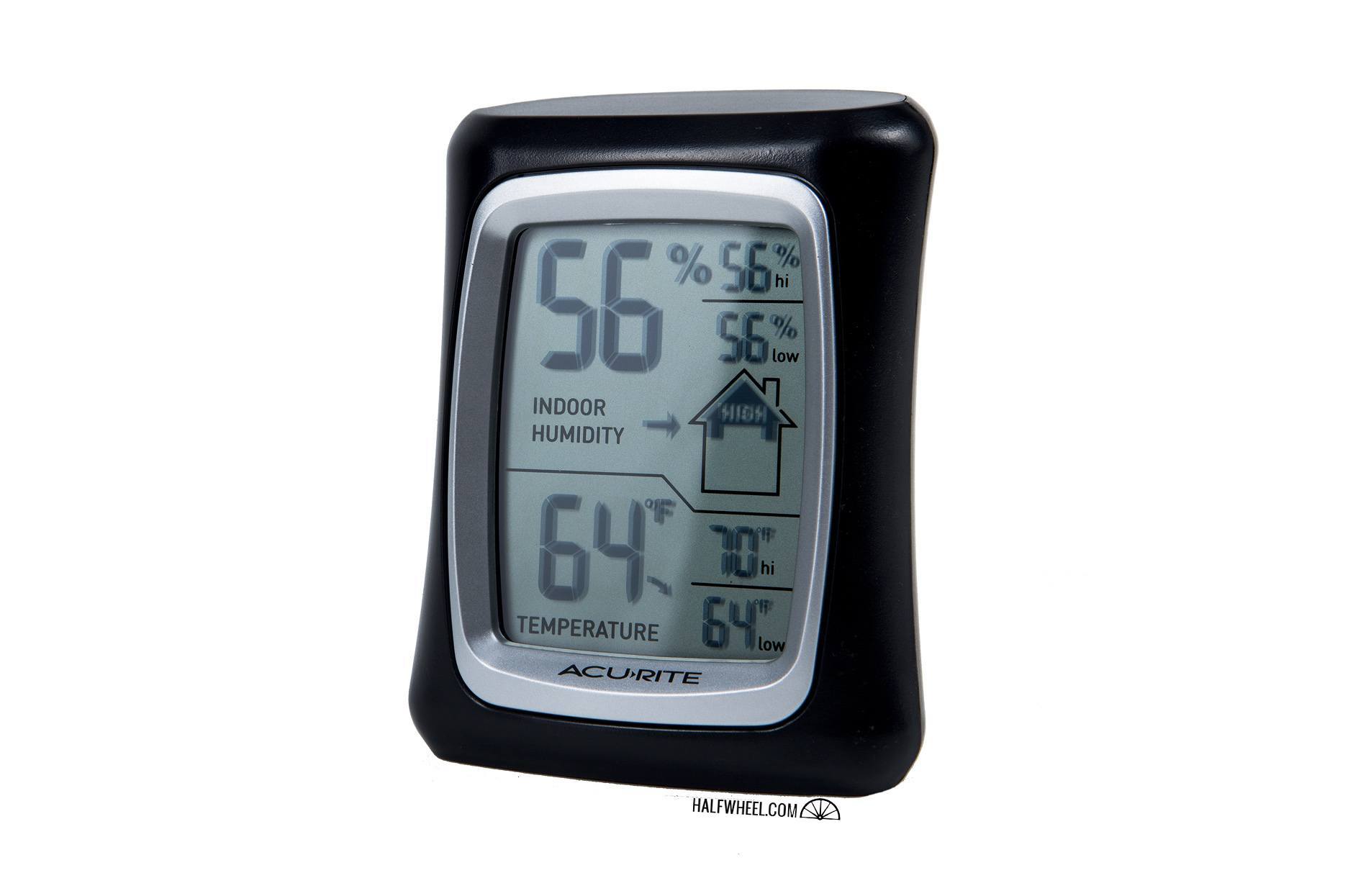 You may have never heard of AcuRite or Chaney Instruments, the brand’s parent company, but it’s one of the most popular hygrometers on the market. How do I know this? Because this model is listed third on Amazon’s weather instruments bestsellers (the place where the online merchant categorizes hygrometers.) At the top is the AcuRite 006131A1, the older model. For those wondering, at this time of this review, Qualy Importers HygroSet II is fifth, the Caliber IV is eighth and XIKAR’s round hygrometer is 19th.

AcuRite is also found in places like Wal-Mart and Home Depot making it one of, if not the most widely-distributed hygrometer in the U.S.. And it’s cheap, making it a popular choice even if it’s not something you’d see in your local cigar store. The new model is similar to the old one, although it now features a slightly redesigned screen and a larger curved plastic shell. It’s roughly three and half inches tall, three inches wide and a bit less than two inches deep. Unlike the older model, this one does not include a stand as it’s designed to be placed solely on the base and stay vertically positioned, something it does quite well, standing far better than the old one. Like the old model, it’s also able to be attached via an included magnet in the back or placed solely on said back, great for desktop humidors. 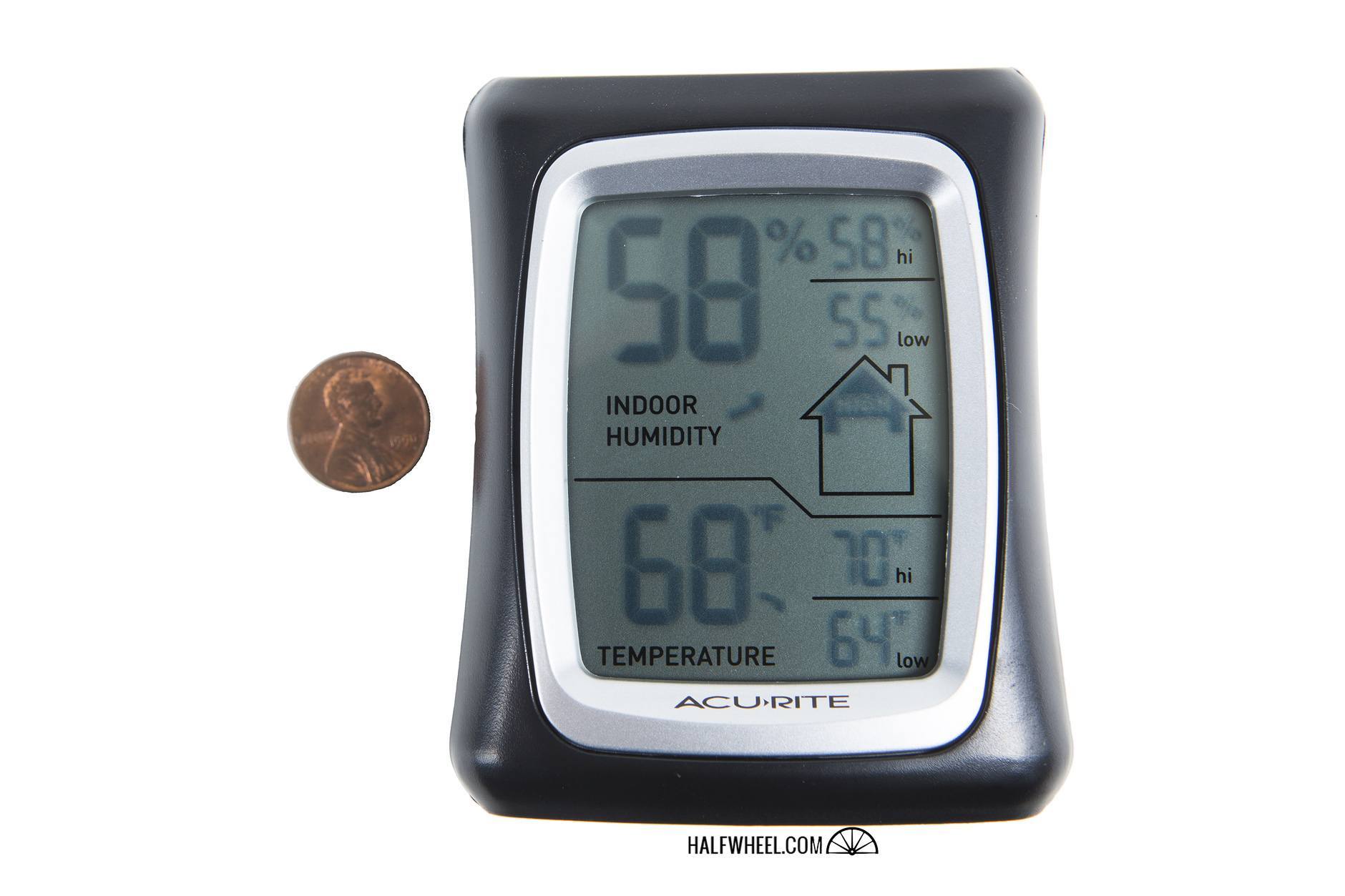 As for the screen, it features reading of temperature and relatively humidity, both of which also include a maximum and minimum for 24 hour periods. Unfortunately all the data is relayed in integers, meaning no decimal points for those who are interested in more precise readings one way or the other. I found that the humidity readings seem to update every 10-15 seconds, whereas the temperature reading is less responsive taking a minute to change even when going from a 70 degree environment to being placed in the back of a freezer. There is also a home icon that is used to show whether humidity is high, medium or low—something that won’t really be useful for cigar smokers.

The unit is powered by a not-included AA battery. It is installed via a door on the back and is easy to change. I purchased two units for this test and both worked and have worked over since last May, though if you look down the Amazon reviews, that’s not always the case. I know from my experience with the older AcuRite model that while the units can work, they don’t always work.

A few years back I purchased four of the old units at the same time. I took them all out, placed them in a bag with a Boveda for a day or two and found that two were reading correctly, one was a percent high on relative humidity and the other was pretty far off. Six months later, one screen was dead, although the two units that worked out of the box are still in our office today. One is providing accurate readings while the other seems to be now off by a single degree of temperature.

While I haven’t replicated these problems with the new model yet, a small minority of the Amazon commenters seem to have and it honestly doesn’t surprise me. Until you start to spend north of $100, digital hygrometers are somewhat of a game.

The AcuRites are good tools for that humidor you occasionally check on. It’s big, bulky, not terribly detailed, not always accurate and not with the greatest reliability, but it’s cheap, dirt cheap as far as hygrometers go. No wireless functions, no beeping, no backlight, not even a decimal point. Now, outside of the latter none of those are particularly large issues for me, but I would love to see a way to calibrate these. I’m not a fan of taking out some scotch tape and writing “+1” to indicate that the factory calibration is reading one percentage point off and I think it’s feature that every digital hygrometer needs, even if it’s the cheapest one.

For the record, there’s a one-year warranty included on the hygrometer. I have no clue how well it works and unfortunately my broken models are too far out of warranty. While I found one instance of what seemed like great customer service from AcuRite on a different product, I would really rely on the vendor when it comes to returns and replacements. Competitors at the $12 price point are sparse and looking around on Amazon, there’s only one I’ve spent time with, although others are now on their way to the office to be tested. The obvious major competitor to the 00325 is AcuRite’s own 00613A1 model. It comes in slightly less expensive, but is virtually the same product. Which one you should chose comes down to a simple question: how will you place your hygrometer in your humidor. If it’s a desktop humidor or cooler and you plan on placing it flat on its back so it can be read when opening the humidor: buy the older one. If it’s a cabinet or wine cooler where the hygrometer will likely stand vertically up on its base, by the newer 00325 because the plastic stand on the older model is, for lack of a better term, crap. If you came up to me in person and asked if I’d recommend an AcuRite, like so many other accessory reviews, it would be a yes and no answer. If you need multiple hygrometers, aren’t terribly worried about how precise your humidity and temperature is so long as it’s in a healthy range and are interested in multiple hygrometers for the cheapest price—absolutely. But, if you aren’t willing to buy three of four knowing that you are buying an extra hygrometer likely to return one of the bunch, the savings probably isn’t worth your hassle. I’d buy one again, but at this point hygrometers particularly basic and non-scientific ones are really only review fascination, not actual tools for me. If you obsess over your humidor’s vitals, it’s the same adage for everything regarding cigars and storage: spending an extra buck to get a significantly better product is hardly a price to pay considering the cost of cigars you are trying to maintain.