When it comes to polarizing words in the cigar industry, I’m not sure if there is any as polarizing as ACID. Since debuting 20 years ago, this brand from Drew Estate has come to take on a life all its own, both for its legions of fans as well as for those who use the name to dismiss flavored and infused cigars as inferior to their more traditionally made counterparts.

But even with that, ACID has become a mainstay in humidors across the country, and remain one of the first cigars that many people smoke after deciding they want to indulge in premium cigars. Drew Estate certainly must be doing something right.

To that end, in 2019 the company celebrated the 20th anniversary of the ACID brand, releasing a number of new projects and sizes, including this cigar, the ACID Croqueta. Named for a term referring to small, generally bite size foods that can run from sweet to savory and come in a fried breadcrumb coating, the cigar takes the brand to new levels of size. However, instead of going big as many other cigars have done in recent years, the Croqueta goes small, down to just a 2 1/2 x 50 vitola, a truly petit robusto. 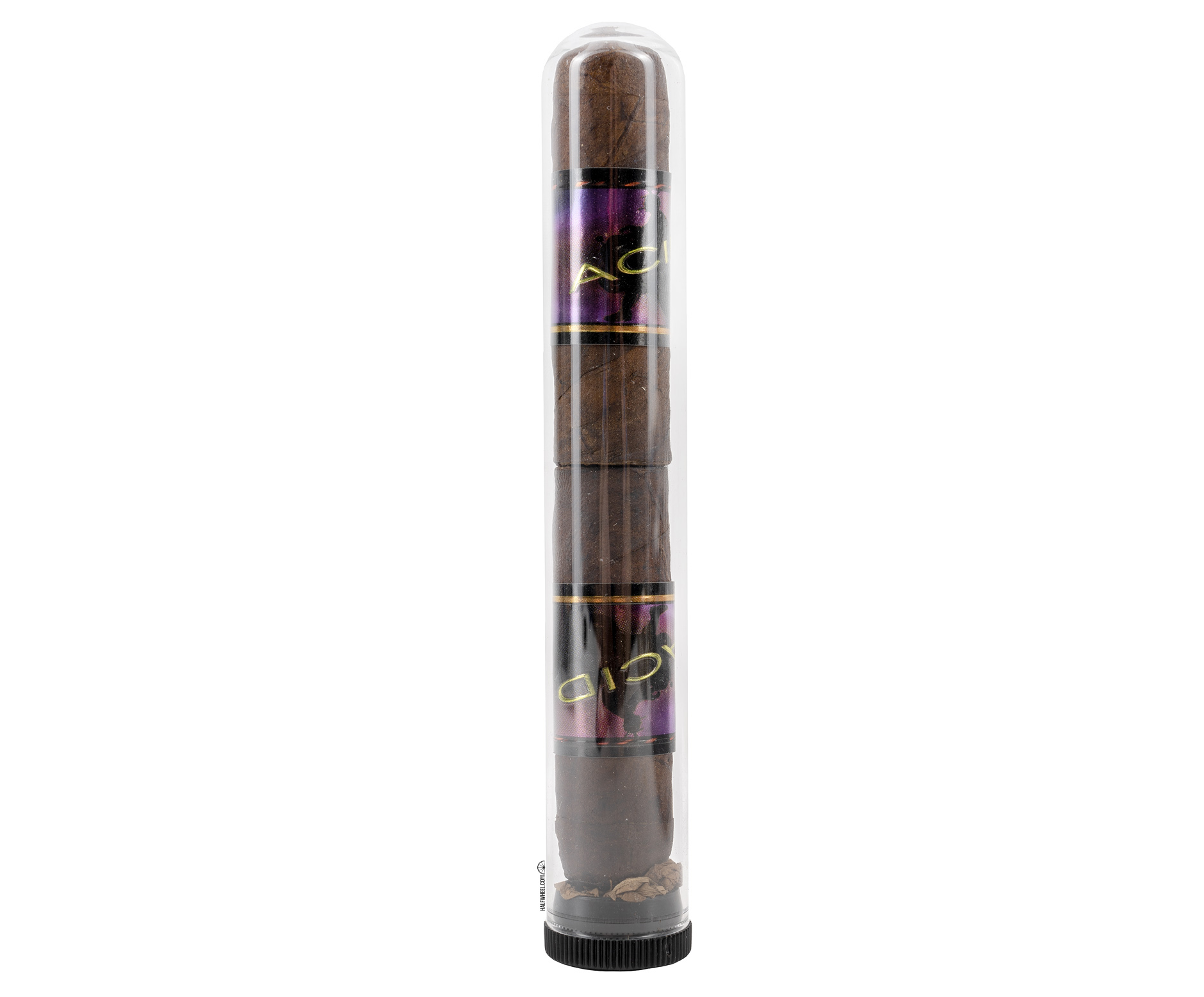 The company also went unique with the packaging for the cigar, placing two of the cigars in a glass tube with the moniker of having one for now and one for later, or one for me and one for you, if you happen to be smoking with a friend.

The cigar, which comes wearing the purple ACID band, uses a Mexican San Andrés maduro wrapper over a Nicaraguan binder and filler, while getting an infusion of undisclosed specifics. For those not familiar with the purple line, it includes the Extra Ordinary Larry, the Roam, and the recently released Plush. 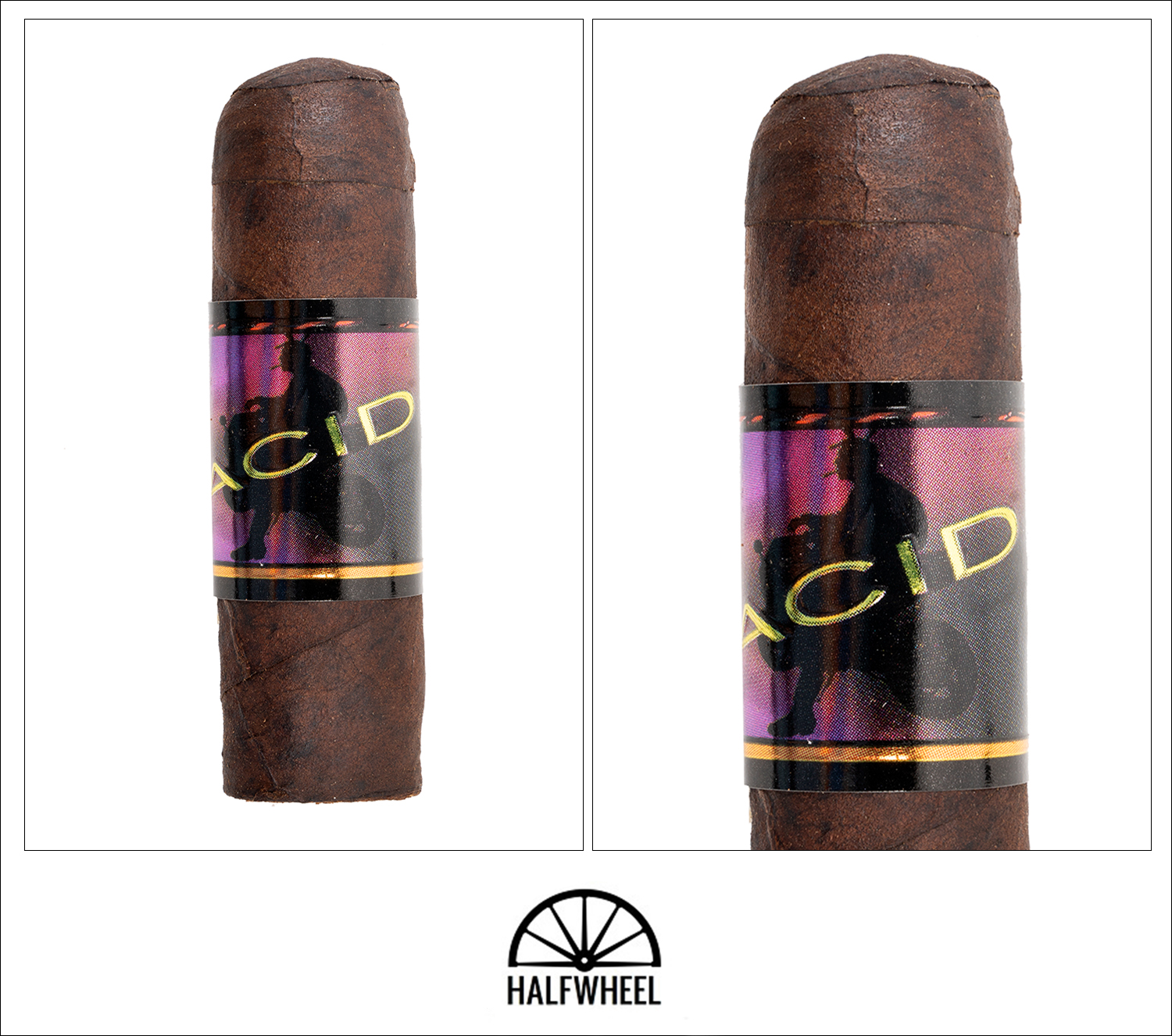 I remember hearing that the ACID Croqueta was small, but it’s even smaller than I imagined once I take it out of the glass tube. The band takes up just under half of the cigar’s total length, which makes it appear even shorter as it breaks up the visual continuity of the cigar. Furthermore, I know that I’ve throw out lit cigars that still had more tobacco to burn than what the unlit Croqueta offers. Length aside, the wrapper is a dark, meaty brown with a bit of variance in color on the leaf, but it gives its appearance more depth and dimension as opposed to making me think something is askew with it. There’s a bit of give to the cigar, particularly near the foot, while the section under the band and the head are both firmer. The foot isn’t overwhelmingly fragrant or sweet, offering a mix of pepper, grape jelly and toasted wheat bread, and if I had to peg the smell in a certain direction to satisfy the preconceived notions of those when it comes to such cigars, it would be of diner-quality grape jelly packs. But make no mistake, it is sweet, particularly right when it is fresh from the tube. The cold draw ranges from easy to firm, and once again I’m not getting the overwhelming sense that this has been infused, at least until I licked my lips and discover a coating of sugary gel. There’s a bit of wood on the flavor of the cold draw, though not much else really jumps out.

There’s a bit of residual sweetness still on my lips when I light up the ACID Croqueta, and it’s not long before the cigar is billowing smoke in signature Drew Estate form. There’s a surprising amount of pepper in the first puffs, particularly through the nose, and it’s almost a bit charred, an interesting combination for the wood note that begins to emerge not long after the cigar is lit. It’s not even half an inch and 10 minutes into the cigar that I need to remove the band lest it get scorched, though that only really mattered in the first sample, the one being photographed. There’s no way I light this cigar up with the band on, knowing how quickly it will need to be removed. I’m surprised that the cigar has some harshness in the early going, though it doesn’t take long to fade mostly away, though it does hang around in certain samples more than others. The smoke production continues to be abundant, while the draw and burn are generally very good.

I’m not getting much in the way of changes from the ACID Croqueta, and somewhat to my relief I’m not getting ridiculous amounts of sweetness. However, that means that the rougher parts of the profile standout without any cover or smoothing over. In this case, there’s the earthiness of the Mexican San Andrés wrapper showing a more gruff, almost rocky profile at times, while the Nicaraguan binder and filler seem to be contributing to that flavor as well. Just past the midway point, the cigar gets dry rather quickly, and I can’t quite place the taste other than an attempt at dry woods, not quite lumber and not quite firewood, but somewhere in that neighborhood. The cigar’s burn rate varies the most in the second third, and I find myself either flying or crawling through this section depending on the sample. Considering that, combustion and technical performance is generally very good, though smoke production has dialed itself back just a touch. There’s hardly any sweetness left by the time the final third comes around, with a dry, fairly uneventful profile left behind that has me struggling to pin some descriptors on the cigar. It’s a bit earthy and a touch woody, but the cigar doesn’t seem to do either of those terms justice. In short, while I’m not totally turned off by the cigar, I find a lot to compel me to return to it or recommend it, as even with the infusion the flavor isn’t particularly distinctive. The burn line has also slowed to a near crawl, so much so that there are moments where I think the cigar must have stopped burning, only to take a draw and see the smoke production ramp right back up. What’s interesting is that even with that outlying sample, the burn times were still within about 10 minutes of each other, definitely some variance given the overall smoking time but not a terribly wide gap. Not being a regular or even occasional smoker of ACID cigars, I wasn't sure what to expect from the ACID Croqueta, let alone how the length might be taken into account to change the profile or infusion. After smoking three of the cigars, I'm left a bit disappointed by what I smoked, both because I didn't seem to get much of the infusion and the base flavors of the tobacco weren't terribly engaging. Tell me a cigar uses a Mexican San Andrés maduro wrapper atop a Nicaraguan binder and filler, and I'd say I'd be fairly interested in trying it, yet this profile had enough rough or simply boring spots that I didn't get much from it that I found overly enjoyable. I don't think the ACID Croqueta is a terrible cigar, but for my palate it lacked enough in the flavor component that I don't think I'll be returning to it any time soon, and I don't really know to whom—or for what reason—I'd recommend it to anyone to try out.