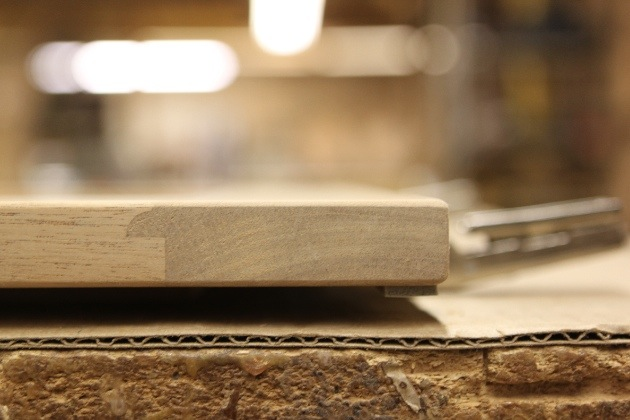 A Visit to Aristocrat Humidors

I spend my summers in Dallas. No, it’s not logical at all. Anyways, while Dallas isn’t a cigar mecca, it is home to one amazing shop, Aristocrat Humidors. For those that don’t know, if you need a cabinet humidor, there really is only one place. Anyways, a recap of my conversation with Bob Staebell and some pictures after the jump. I didn’t record the conversation, so this will be a glorified summary. Bob Staebell started Aristocrat in similar fashion to Sam Leccia and Xikar, in his garage. In 1992, Aristocrat became official and its moved out of a garage. The first thing one notices when walking in is the shear amount of wood. There were only five or six humidors on the shop floor, but the shop is crowded with shelves, humidification systems and what looks like a foreclosed lumberyard. For those that haven’t drooled over Aristocrat’s website like a ten year-old and their father’s Playboy… it’s custom made cabinet humidors with every detail worked out. I’m not sure of the process one goes through when placing an order from Bob… but I imagine it is something like this… First, you figure out the size of the humidor. The Mini is the smallest humidor (15-20 boxes) then there’s the MXT Plus (couple hundred boxes) and everything in between. I suppose you would then need to figure out if you want a climate controlled unit or not. And then, configuration, woods, glass, etc… Bob works through every detail from the humidification system to how to display your cigars. Bare with me on this one… but, the advanced humidification system goes something like this. Bob has an complete system that includes fans for circulation. The fans run three minutes an hour by default keeping the entire cabinet (even the gigantic ones) within 1-2% RH of your desired all throughout. Of course the user can fiddle with the control unit all they wish, setting fan times, RH, etc… Where things get crazy is in the temperature controlled units. Bob fits those units with unique cooling elements that have warm and cold Peltier units of equal size. While I don’t understand the science, the result is the removal of most condensation, something that destroys RH. The humidors were in all different states, including one ready to be picked up. Some were recognizable as similar models, one looked completely bespoke. While Bob focuses mainly on cabinets, he still does an occasional desktop, although he didn’t sound too excited. Opening up a finished humidor was amazing. The weight of the drawers, the strength of the hinges and the smoothness that is the entire unit. The humidors had employed some unique woods, through the conversation Bob kept mentioning his use of mesquite woods, which isn’t something you see on your average humidor. I asked Bob about his “craziest job” – he couldn’t really come up with one. However, Bob’s client list is pretty extensive: A-list actors, hall of fame sports figures, TV personalities and even 1600 Pennsylvania Ave. I found his job for a certain Saudi Arabian family rather interesting, given the adjustment that had to be made for the uniquely dry climate. His clients are 20% repeat business: leading me to believe there are a lot of unhappy spouses. Apparently one person has five humidors stocked to the brim, three of them armoires? Yeah… that’s the next field trip. The pictures don’t do Aristocrat any justice. If you want to see some more, check out their site – there’s only a 1,000 or so for you to drool over. Bob’s knowledge of humidors is mind-boggling and his commitment to perfection is… also mind-boggling. If you need a cabinet, there’s really only one option and I suggest giving Bob a call and if you have the chance, stop by the shop and be surrounded by humidor royalty.

I thank Bob for allowing me to stop by, he was as nice as could be and answered all my questions, which as one would imagine was quite a few.