And now for something completely different.

If the halfwheel staff was asked to rank its collective favorite restaurant, my money would be on Tei-an. And if I had to bet which restaurant I’ve spent the most money at in the last year, my money would also be on—err, at—Tei-an.

In 2009, after operating a few of Dallas’ most notable Japanese restaurants, Teiichi Sakurai opened Tei-an, a soba house. As the story goes, Sakurai’s grandfather told him you do not serve sake with sushi, you serve sake with soba. So after owning restaurants that focused on more common Japanese foods—sushi and grilled meats—Teiichi went back to Japan and learned how to make soba, a buckwheat noodle.

Unlike the popular Japanese noodles—ramen and udon—soba is generally very simple. Ramen is more about the broth, and the noodles are oftentimes buried underneath proteins, vegetables, eggs, seaweed and really whatever else might be lying around a kitchen. With soba, there is nowhere to hide. Traditionally, soba is noodles and a dipping sauce.

If that wasn’t enough, soba must be made daily and cut by hand. And as such, if you are looking for an authentic soba house in the U.S., your best bet is oftentimes a plane to Japan.

Located in downtown Dallas, Tei-an can simultaneously be fine dining and also a raucous bar crowd of regulars more akin to a semi-secret country club with a special hangout spot on the rooftop. While the restaurant might be based on one of the purest dishes in all of the world, its menu ranges from the aforementioned purity in buckwheat noodles to tempura shrimp battered with Lay’s potato chips.

Tei-an has a rooftop patio where cigar lovers, including Sakurai, can smoke a cigar and enjoy a whisky after a meal. One night—over cigars and drinks—I was talking with Best Ranglek, Tei-an’s general manager, and he asked if I would educate the staff on cigars.

I proposed something a bit different: rather than cigars on the roof after dinner downstairs, how about cigars with dinner on the roof. And so began cigar omakase, a six-course meal made for—and sometimes with—cigars.

Davidoff, who has hosted similar dinners at Thomas Keller’s The French Laundry and Per Se, joined as the official cigar partner of the dinner, while Tei-an favorites Krug (Champagne) and Suntory (Japanese whisky) were chosen for alcohol. Two weeks ago, under the cover of some heavy rain, a dozen or so guests joined halfwheel, Davidoff and Tei-an for a special event at my favorite restaurant in Dallas.

The evening started upstairs on Tei-an’s roof, which due to rain was covered.

Guests started with Krug 2000 and a Davidoff Grand Cru. After a short meet and greet, people took their seats and I explained the concept, a different spin on a typical cigar dinner. Lana Fraser, head of marketing for Davidoff Americas, was on hand to talk about the cigars, Davidoff and the brand’s connections to food. Champagne in hand, she proposed a toast and then the food started. 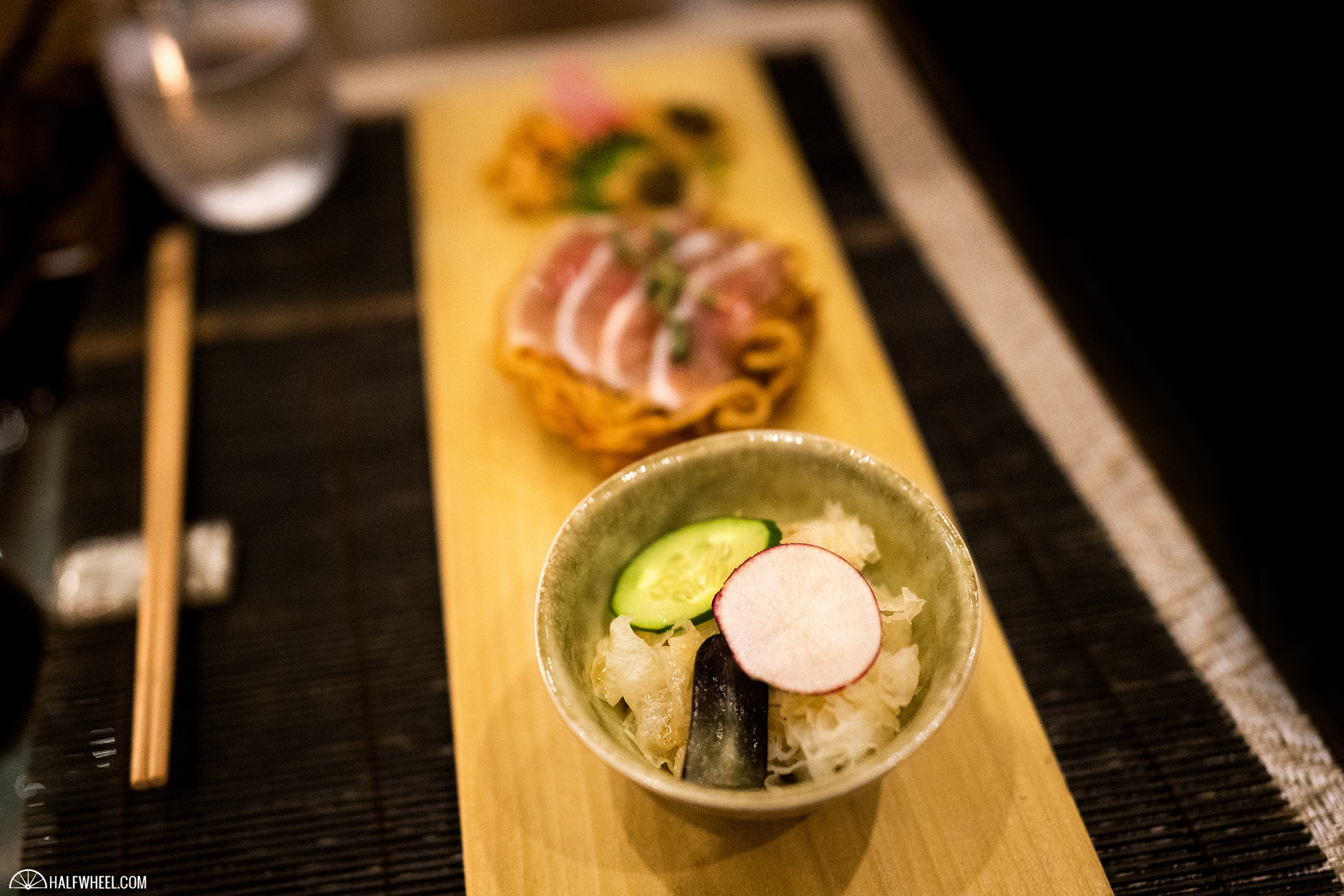 From top to bottom: soba chips with caviar; fried soba noodles with duck; and Tei-an’s signature white seaweed salad with slightly more garnish than the dish typically has if you order it from the menu. The aforementioned rain meant the dinner was moved into Tei-an’s private dining room, named (Area) 51. After an elevator ride downstairs, a walk through the kitchen and rearranging into new tables, the next course arrived.

Tei-an might be a soba house, but it also serves the best raw fish in landlocked Dallas. Technically, this course is otsukuri, which at Tei-an seems to mean off-menu sashimi. Brooks likes depth of field more than fish, so if you are wondering behind the shrimp head there was scallops, Canadian uni and a variety of Japanese fish. A magnum of Krug Rosé was opened, poured and consumed. 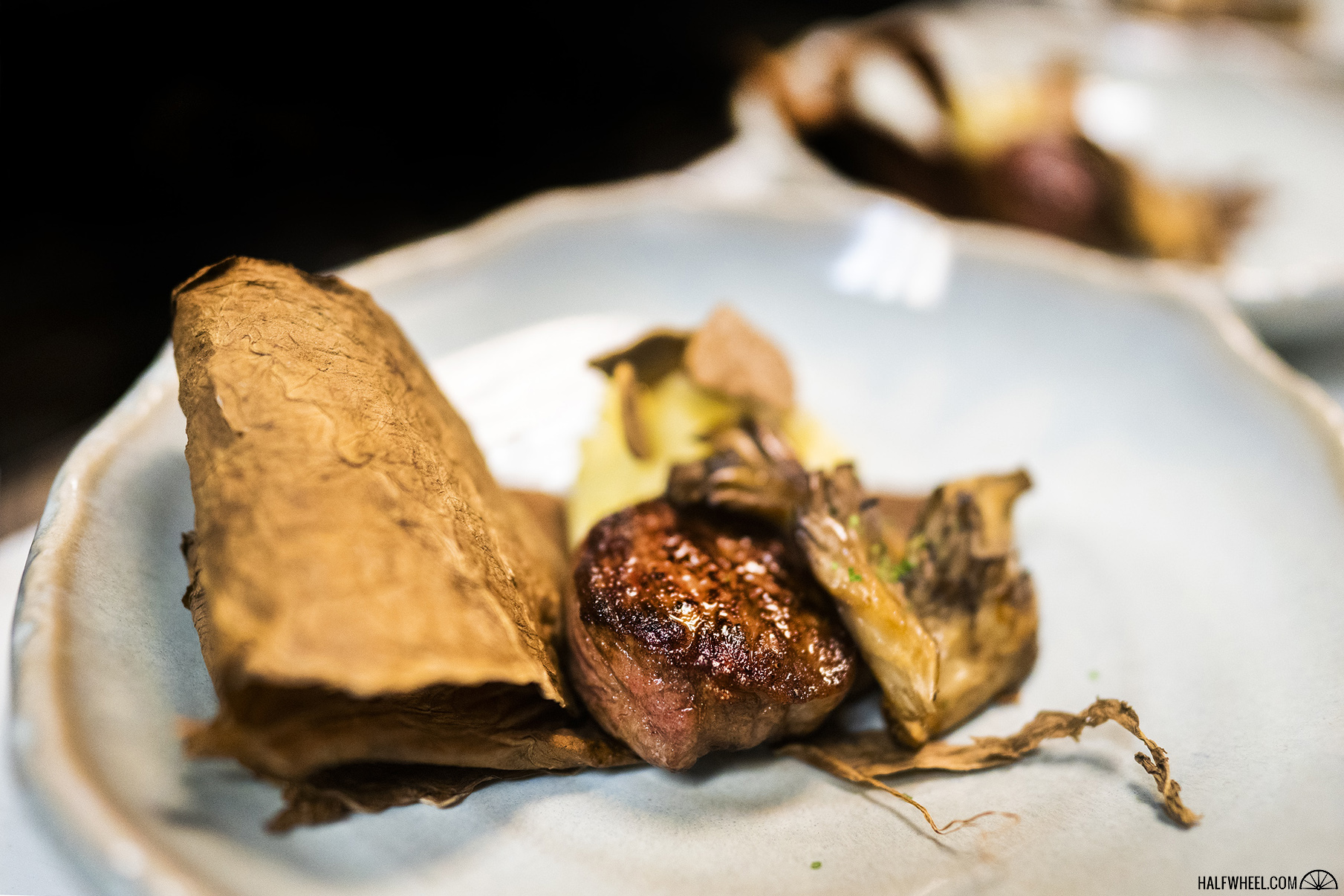 I asked Sakurai to make one dish with tobacco. He apparently tried to incorporate tobacco into every course before concluding that tobacco in every dish wasn’t a good idea.

The end result was a piece of Kagoshima A5 BMS12 beef smoked with Davidoff filler tobaccos from the Dominican Republic and Nicaragua. It was served along with white truffle mashed potatoes, Yamazaki 18 and on a leaf of tobacco. If all that wasn’t enough, Davidoff Nicaraguas were passed out, a fitting pairing given the tobaccos used to smoke the meat. Next up was Alaskan cod topped with a wasabi stem. Regulars of Tei-an will identify crispy Brussel sprouts behind it. A good rule of thumb at Tei-an is if you see a dish served with Brussel sprouts, order it. Many of my favorite dishes at the restaurant have been served alongside the sprouts.

This was served with the Chita, one of the lesser-known brands from Suntory. While soba is traditionally served quite plain, soba bolognese is a house specialty. If you are able to eat at one of the special omakases at Tei-an, there’s a good chance you will get either soba bolognese or soba risotto as your last savory course.

Suntory Royal, a blended whisky, was served alongside it. While not as famous as the aforementioned Yamazaki 18, Royal was very good. (It’s also less than half the price.) 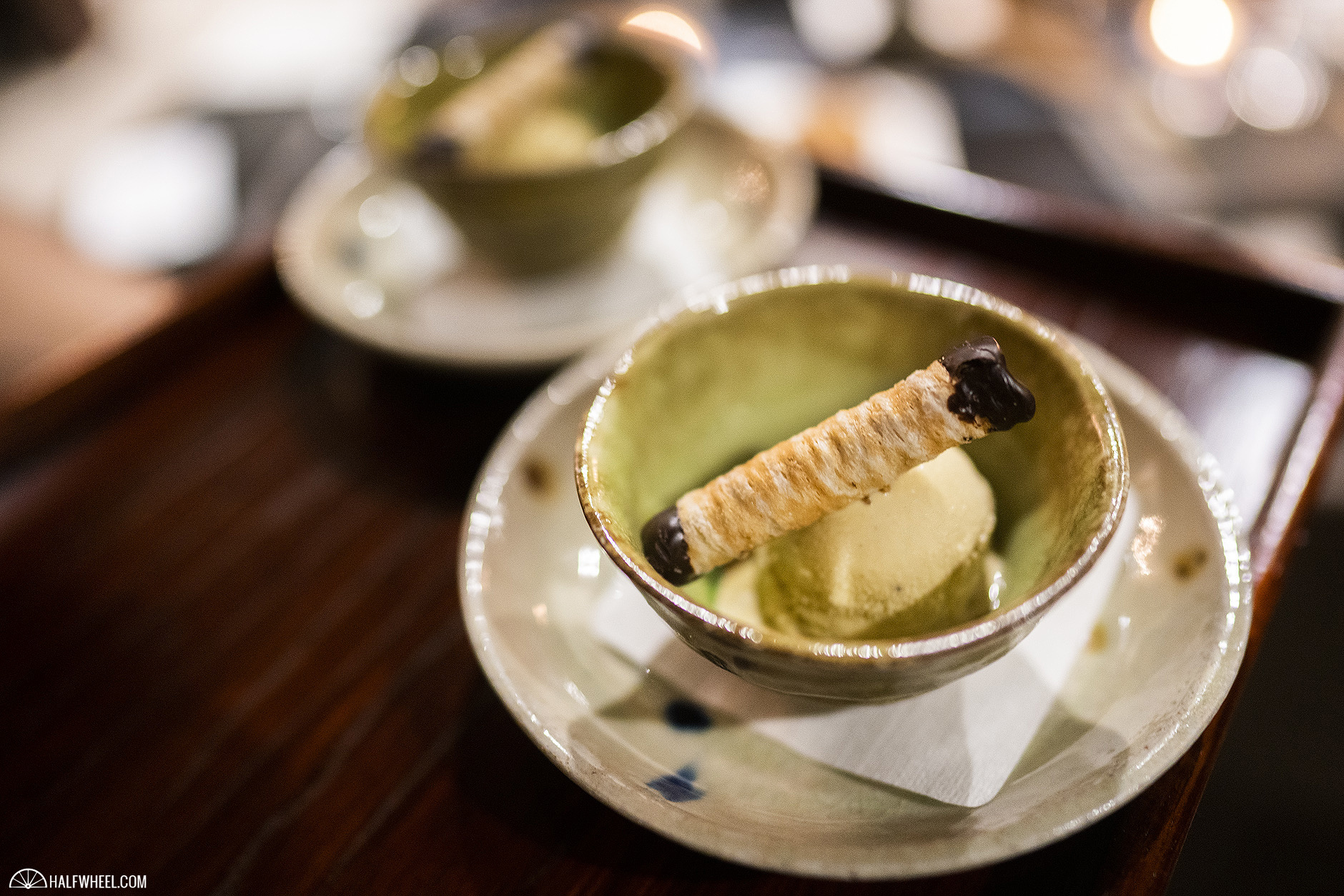 We moved back upstairs for dessert: soba tea ice cream and pastries. As good as that was, it was overshadowed by the other two offerings.

On top is the Davidoff Tei-an Edition, a not-for-sale cigar given out to guests who attended the dinner.

Below is a coffee-based cocktail developed by Mike Suwannasorn. Davidoff tobacco was again used, this time to smoke the glass of the cocktail, which from what I understand was a rather interesting experience for the guests at the Tei-an bar.

There were more drinks, more cigars, more stories and even an appearance of an S.T.Dupont Haute Creation lighter, meaning I can now cross off “light a cigar with a lighter more expensive than my first car” off my bucket list.

While not open to the public, the rooftop at Tei-an is my favorite place to smoke a cigar in Dallas. It has a fully retractable roof and walls, heating and a/c and oftentimes there’s a dog upstairs named Toro, a reference to the Japanese for fatty tuna, not a 6 x 50-sized cigar. 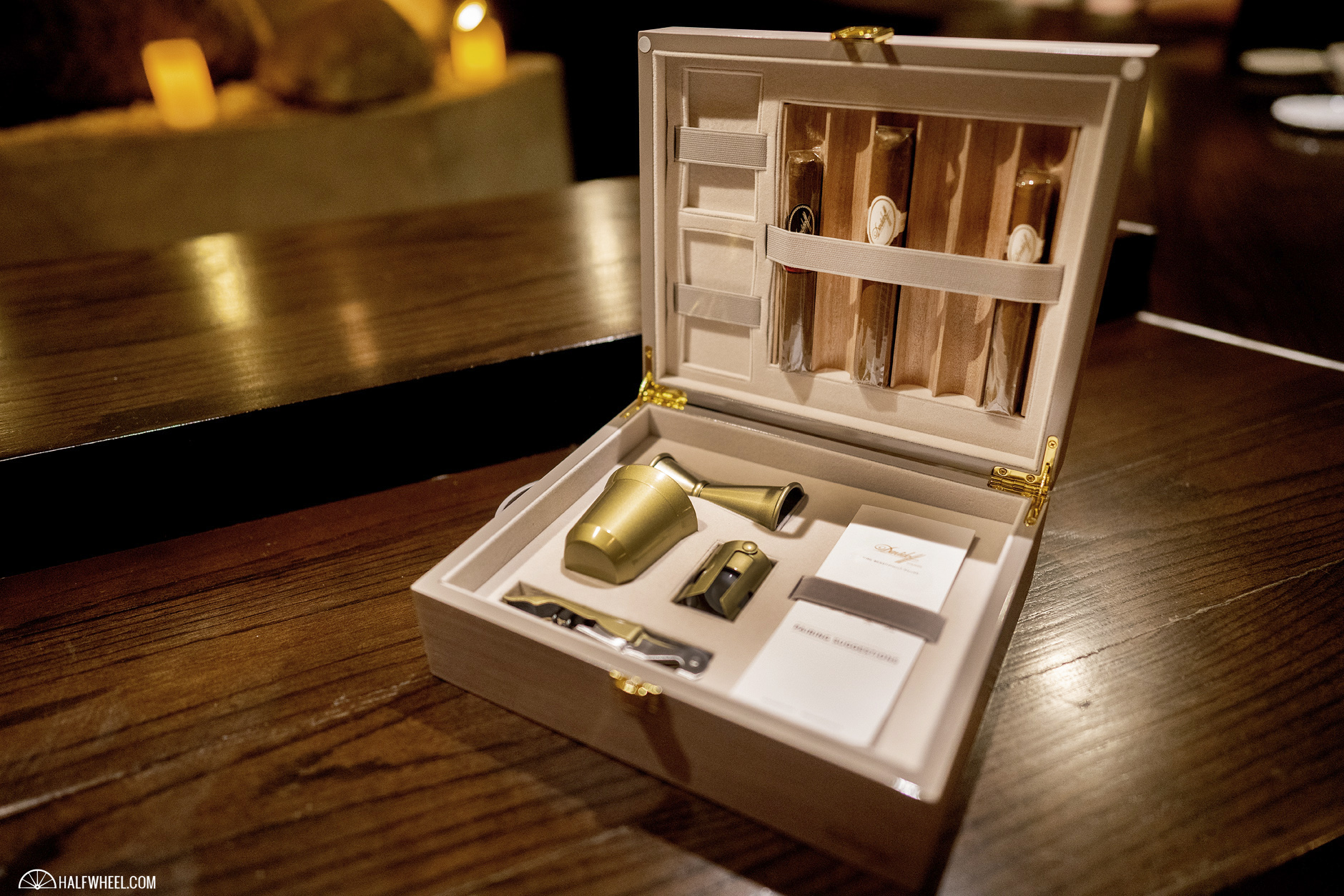 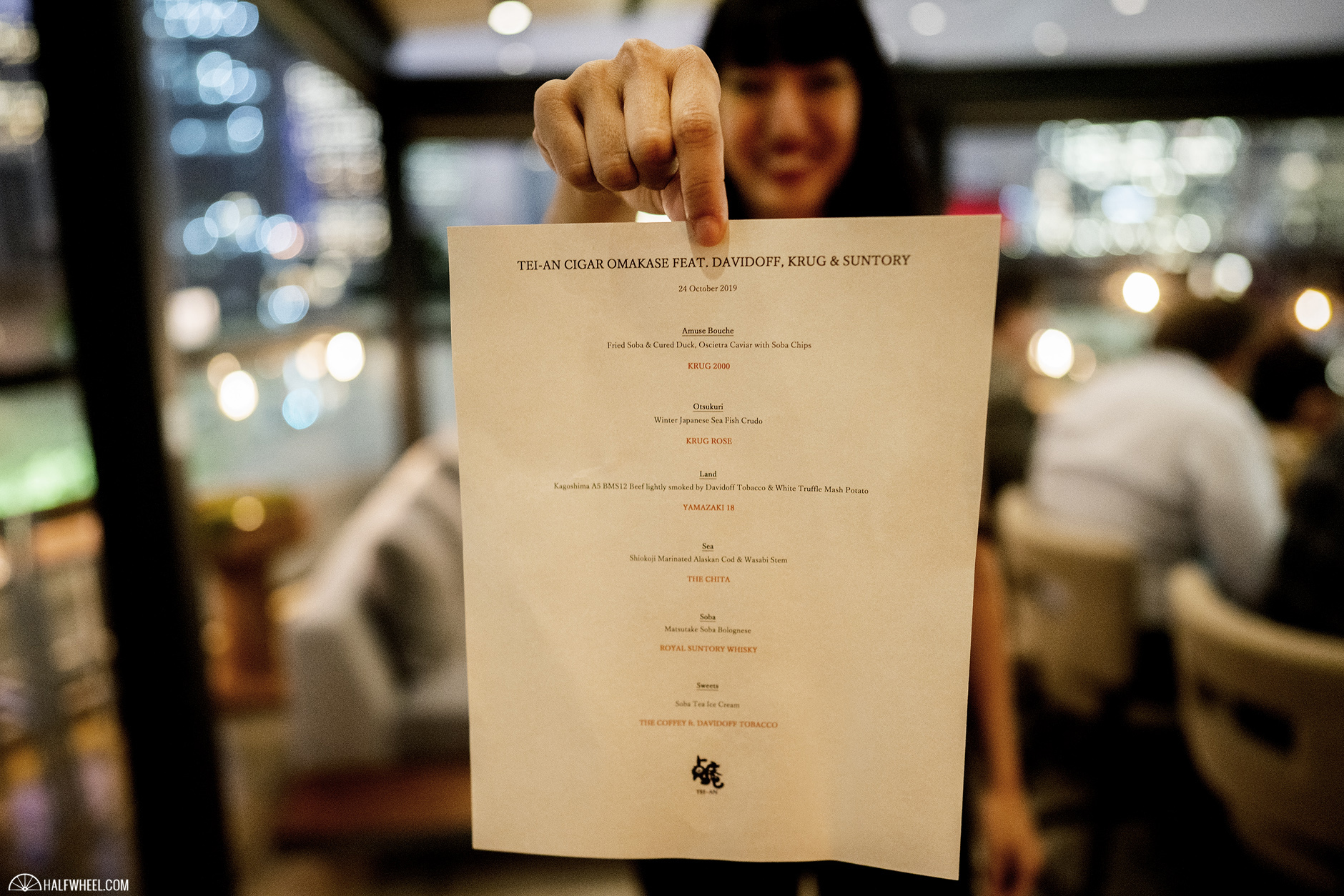 If you are ever in Dallas—unless it’s a Sunday, Monday or two weeks in July when the restaurant is closed—I cannot recommend Tei-an enough. Perhaps, if you ask nicely, you might find a night where the roof is open and you too can enjoy soba followed by a cigar overlooking the skyline. The classic Charlie order is: Ki No Bi gin and tonic, white seaweed salad, sushi, black sesame soba salad. 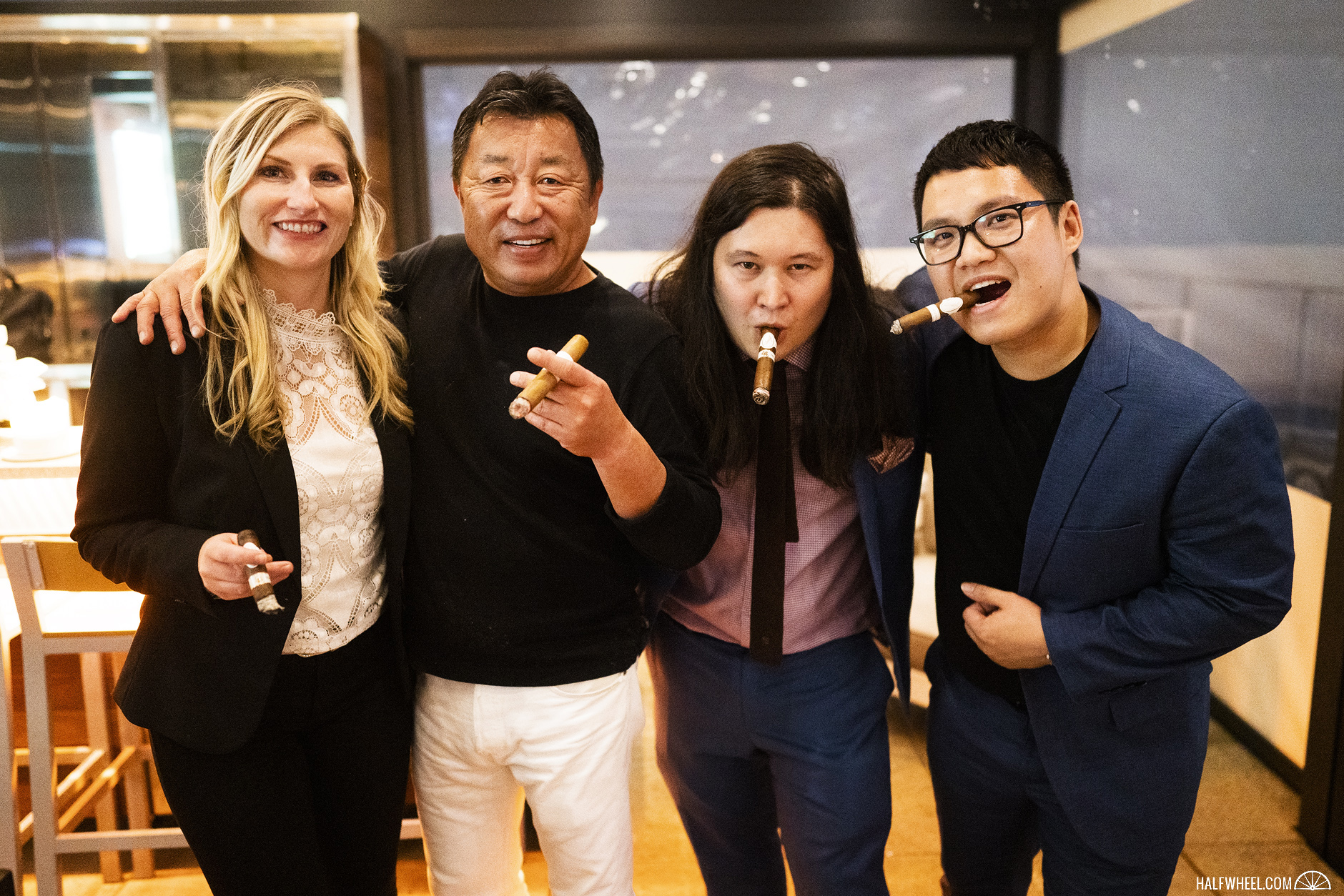 As for the next cigar omakase, that remains to be seen.

In case the dreary-eyed picture of me above does not make this clear, this was exhausting; I’m exhausted just thinking about it. I’ve long wanted to do a dinner like this, but it’s a lot of work and if I am being very blunt about it, not something we make money doing.

For me, the cigar omakase was a labor of love and a celebration of food, cigars, drinks and friends. And while you don’t need the best of everything—dinner was $725 per person—to make a night this special, it absolutely doesn’t hurt. 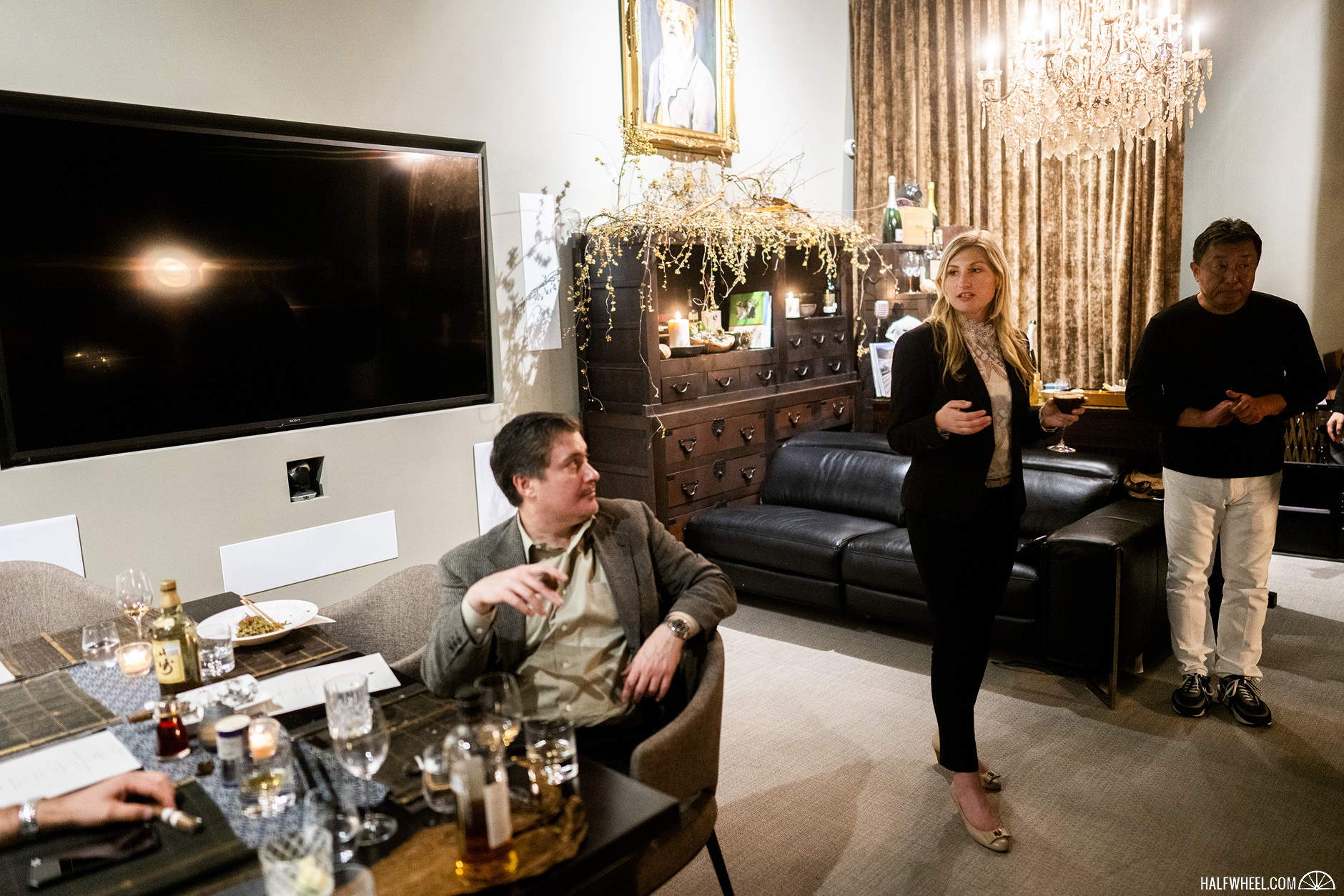 A lot of work when into making a few hours on a Thursday special. Thanks to:

Everything at Tei-an starts and ends with Teiichi, the mysterious figure off to the right in his trademark white jeans and black shirt. I first had the idea for a dinner like this a handful of years ago and for whatever reason, never really considered doing it at Tei-an.

A quick search of “top restaurants in Dallas” from either the local media, the national media or better yet, his peers, should reaffirm my proclamations about the food and service at his restaurant. But Teiichi is much more than just a chef or restauranteur; he’s one of those people who clearly sees the world differently. He also happens to be a bonafide cigar lover, the perfect host for a special night like this.

All photographs were shot and edited by Brooks Whittington.